It’s always a mistake to think that you have any real grasp on what’s happening in Mr Robot, given that creator Sam Esmail could upend the whole thing at any moment, showing you that black was white and truths were lies, but the basic situation laid out in this well-paced double bill is as follows:

It’s a month since fsociety hacked E Corp and Elliot (Rami Malek) realised that ‘Mr Robot’ (Christian Slater) was his own manifestation in the form of his dead father. Understandably shaken by this, our wide-eyed anti-hero has gone to ground in Queens of all places. He’s back home living with his cold and withholding mother (“she’s the strictest person I know”) and living an “analogue life”. 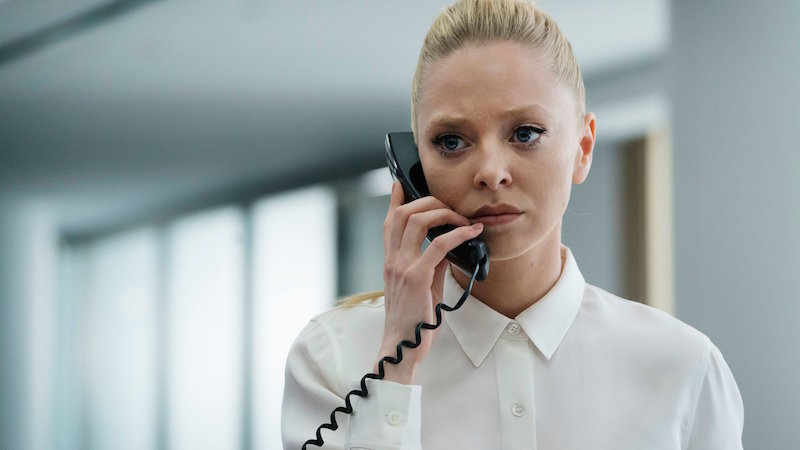 How do I take off a mask when it stops being a mask?

What this essentially boils down to is trying to keep ‘Mr Robot’ at bay through a repetitive set of actions (“my perfectly constructed loop”), including going to the park to watch basketball, listening while new friend Leon talks about Seinfeld and the art of nothing (“maybe I’m over-thinking it?”), cleaning up in his mum’s house, attending a church group (“they seem normal”), and writing in a journal.

Unfortunately for Elliot, things aren’t quite as simple as all that. Mr Robot still wants to come out to play, leading to a number of conversations about will and responsibility and whose fault the E Corp hack ultimately was. And the supremely creepy Tyrell Wellick isn’t out of the picture yet either—after being missing in action for most of the double-header, the second episode ended with Elliot taking a phone call which opened with the familiar words “Bonsoir Elliot”.

So, where does our young protagonist go now?

What seems to be shaping up here are two separate fights: one between fsociety and E Corp for America, and one between Elliot and Mr Robot for his mind. And the only thing we can say for certain is that neither will be easy to watch. They’ll almost certainly make for outstanding television, however: these opening two hours demonstrated that Esmail hasn’t lost the nerve and style that made season 1 such addictive viewing, while Malek’s performance is still so good it hurts. In particular, the scenes involving Elliot were a powerful picture of mental illness desperately held at bay that was both bleakly believable and horribly raw to watch. Welcome back, friend. 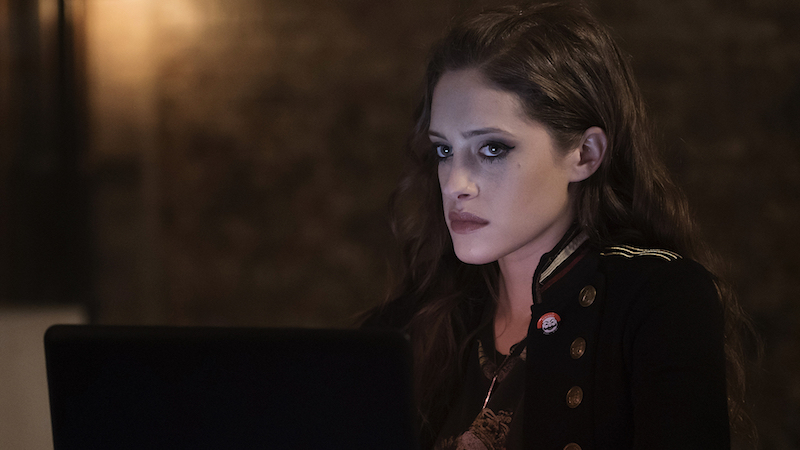 We’re in a war—and we’re on the losing side of it.

What of the rest of the gang? With Wellick missing in action, the divinely creepy Mrs Wellick (Stephanie Corneliussen) was left to get her S&M kicks from a hapless former bartender who really wasn’t too happy about it (“did I hurt you too much?” he asked pitifully before wilting in the face of her snarl). Meanwhile, Darlene (Carly Chaikin) has assumed control of fsociety—in a throwaway moment we learnt she’s visiting Elliot, but we’ve yet to see the fruits of those interactions—and is doing her best to direct the ongoing revolution.

As to how that’s actually going… well let’s just say the jury is out. One of the episode’s most powerful scenes saw a woman desperately try to convince her branch of E bank that she’d made her loan payments, and it’s clear that Esmail wants us to remember that big beasts like E Corp adapt quickly to even the worst experiences and then promptly start manipulating the situation to their own ends. Darlene did manage to pull off a couple of good stunts—having her people saw the balls of the Wall St bull in an amusing short scene, and more importantly getting the E Corp CTO to burn $5.9 million while wearing a fsociety mask—but it still feels as though without Elliot this is a revolution in freefall. 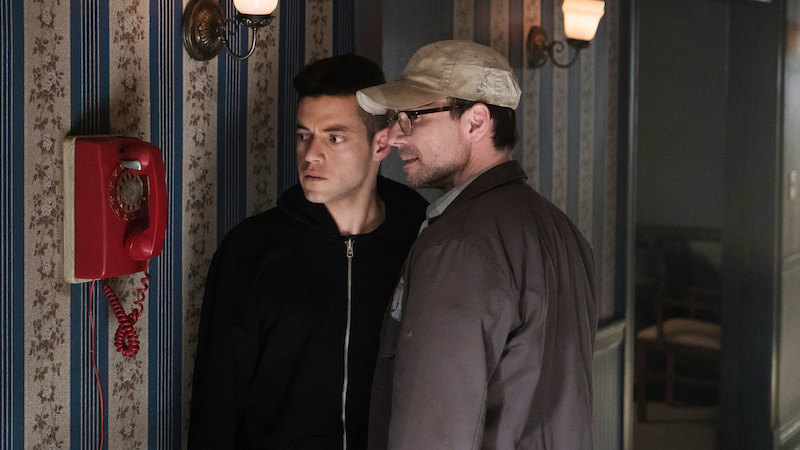 I am confident. My confidence is powerful.

At least one member of the old crew was doing okay, sort of. Angela (Portia Doubleday) has sold her soul to Evil Corp in exchange for a PR manager’s job (which I’ve heard is pretty much the going rate in PR these days) and is doing rather well. Unfortunately, she’s also cut off from her friends, disliked by her colleagues, and on the outs with the lawyer who fought so hard for her family and ended their relationship by telling a joke that implicitly branded Angela a whore. Truly, you can’t win them all, but at least she has a fine swishy ponytail and a crisp white shirt in recompense.

A solid 6 for both episodes. This was a pretty clear opener, more concerned with getting us up to speed than messing with our heads. It was only when Leon vanished from the court that I suddenly realised “oh, wait a minute, he’s not really there…”

So what did you think? Were you glad to be back with our man in the black hoodie? Can Darlene lead fsociety, or will it all fall spectacularly apart? And what price would you pay for Angela’s increasingly tarnished soul? As ever all speculation and NO spoilers are welcome below…