Similarly to Michael Haneke’s Funny Games (2007), director Hans Petter Moland has remade his own acclaimed Norwegian noir In Order of Disappearance (2016) as Cold Pursuit. However, for this US version, certain tweaks have been made to writer Kim Fupz Aakeson’s original script by Frank Baldwin, like replacing Norway with Colorado so the story’s essential wintry landscape is maintained.

Many compared Moland’s feature In Order of Disappearance to Liam Neeson’s action thriller Taken (2008) when both premiered on the festival circuit in 2014. On paper, they sound remarkably similar, but Moland’s dark humour took the typical material of his work in more original directions. After reassuring us with his “very particular set of skills” in the Taken franchise and fighting for the weak in Non-Stop (2014) and The Commuter (2018), it seems only fitting for the Academy Award-winning action star to return to his everyman origins for a movie once compared to one of his own. 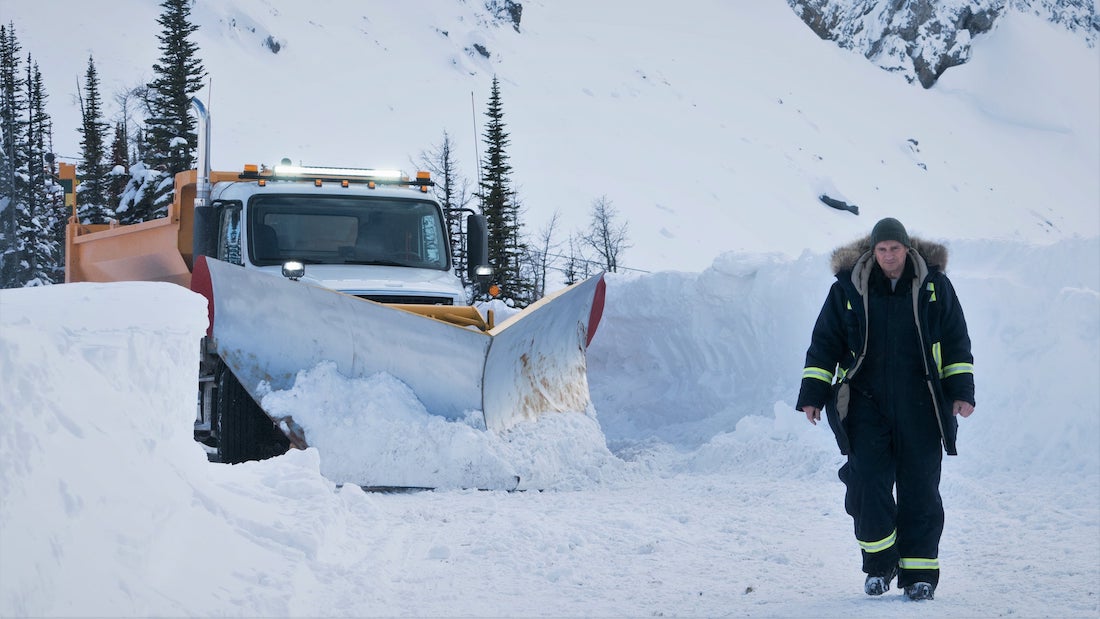 A snowplow driver for the town of Kehoe, Denver, Nels (Liam Neeson) is beloved by his community, trying to be a decent husband to his wife Grace (Laura Dern) and family. When their son, Kyle (Micheál Richardson), is found dead from a drug overdose, Nels loses the will to live but later finds a purpose after uncovering the truth behind his son’s death. Discovering it was in retaliation from a drug lord named ‘Viking’ (Tom Bateman) after a cocaine shipment went wrong, Nels follows the trail of Viking’s connections… killing any corrupt man standing in his way in a quest for revenge.

Neeson is on auto-pilot playing a character out to avenge his son’s killer. After playing the same protagonist in almost every feature he’s appeared in within the last decade, you’d think Neeson would have enough experience to portray a father hellbent on vengeance. However, in a controversial interview to promote Cold Pursuit ahead of its cinema release, the actor explained how he channelled Nels Coxman’s primal anger by recounting an experience he had many years ago. 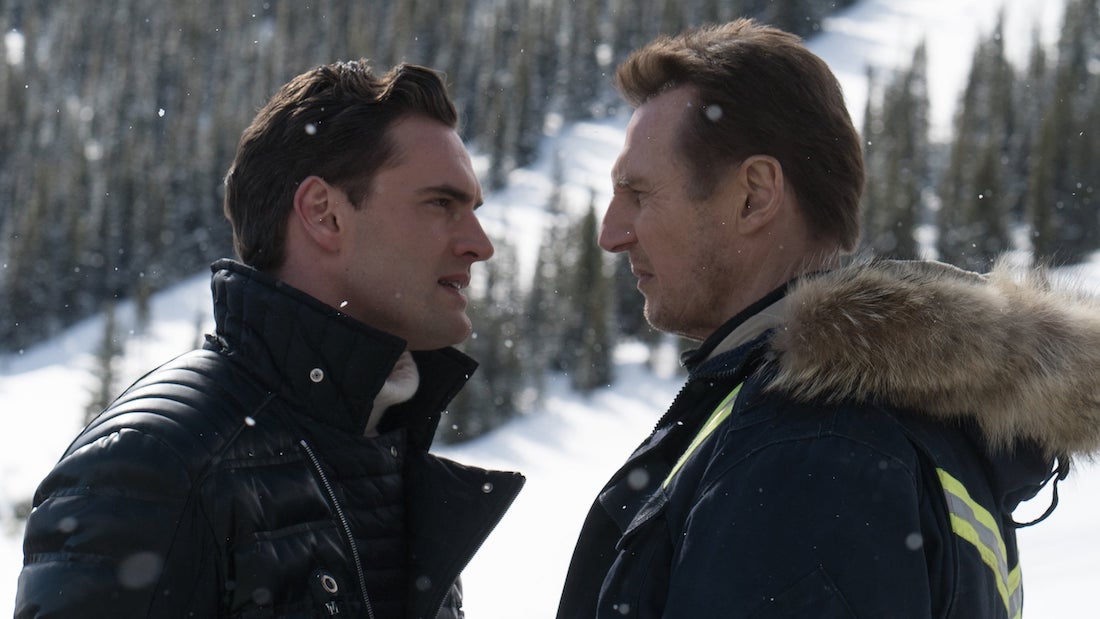 On the contrary, armed with his Irish charm that makes housewives swoon, Neeson is up for the challenge of the bloody action scenes, again portraying the ‘strong and silent type’ with his natural scowl and gravely voice. The last time the actor created any depth to a character was as John Ottway in Joe Carnahan’s The Grey (2011), which coincidentally was the last time we saw the actor in a snowy environment. There’s very little emotional gravitas given to Nels. Although he’s intimidating when wielding a sawed-off rifle and has an interesting way of disposing of dead bodies, thanks to reading crime novels, Neeson often looks tired and starved of new material.

In regards to supporting cast, the true highlight is Tom Bateman (Murder on the Orient Express) as vile kingpin Trevor ‘Viking’ Calcote. He creates a character one loathes the second he appears. Walking a fine line between menacing and intolerable, Viking’s aggressively misogynistic and pushes toxic masculinity on his son Ryan (Nicholas Holmes) as if it’s the norm. Suggesting William Golding’s novel Lord of the Flies contains the answers to life is highly amusing. Whenever he’s not beating his henchmen to a bloody pulp with his bare hands, Bateman’s performance is a mix of Jim Carrey’s Riddler from Batman Forever (1995) and Robert De Niro in Goodfellas (1990). 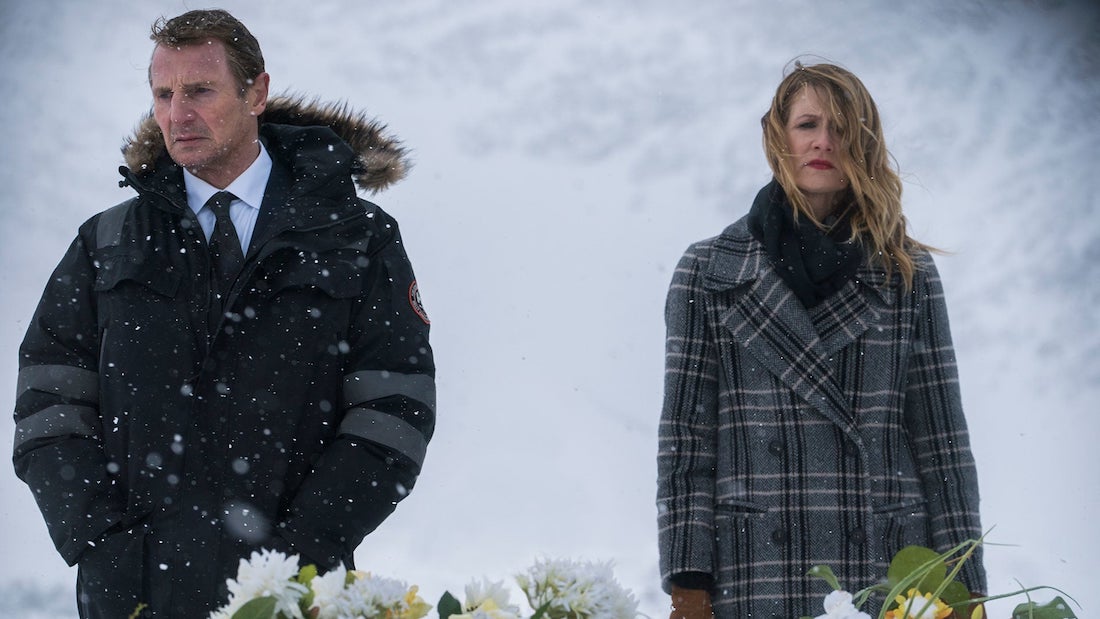 Due to being thrust straight into the narrative, much of the character development of the peripheral actors is none existent. There’s little dynamic between the Coxman family, failing to create any sympathy for the tragic murder of young Kyle. This has a negative impact on the film. Serving as the main plot device for the story, one barely gets to notice his existence as he only appears in one scene with his parents. There’s no time to connect with family, as both Laura Dern (Jurassic Park) and Neeson’s real-life son Richardson are reduced to minimal roles rather than fully-developed characters. Due to no hint of a relationship being formed on screen and the lack of depth to the Coxman family, it makes one question whether Nels’ actions are aimless.

Black comedy is a difficult mixture to do well, but Moland succeeds in giving Cold Pursuit its own personality fuelled by morbid humour. It’s obvious the director is wearing his Coen Brothers and Quentin Tarantino influences on his sleeve here. The feature plays out similar to Fargo (1996) with amusing dialogue and tongue-in-cheek humour. Moland has crafted a quirky revenge thriller that subverts expectations, but that’s not to say this isn’t violent and lacks a body count. The macabre punchline to each characters death is a title card memorialising the victim’s name, rather like a cinematic tombstone. The irony from the start is seeing Nels awarded ‘Citizen of the Year’ before going on a murderous rampage, or the eccentric way one of Viking’s henchmen tips a hotel maid. Much like Martin McDonagh’s Seven Psychopaths (2012), this movie follows its own rhythm. 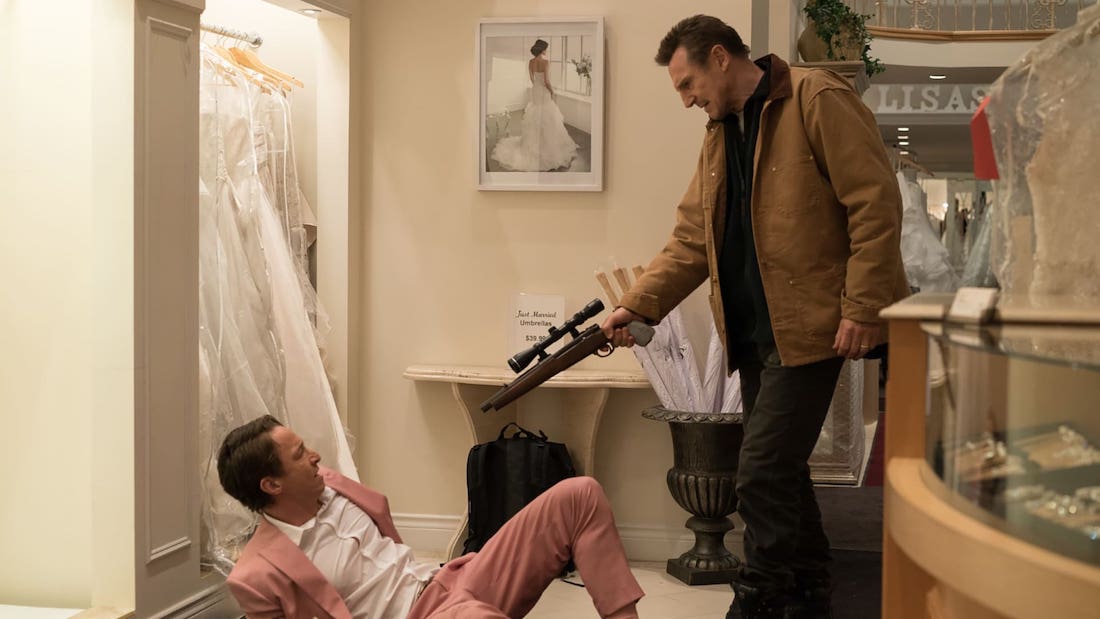 With such a large ensemble and a script packed with so many twists and turns, Cold Pursuit still lets its potential get pushed aside like snow by a snowplow. Dern is criminally underused as Grace; a simplistic and disposable ‘grieving wife’ character. She might have become the moral compass of the story during Neeson’s rampage, but instead gets haphazardly written out of the story halfway through. The incredible Emmy Rossum (Shameless) and John Doman (Gotham) portray two Kehoe town police officers trying to make sense of the mayhem, and both do their best and are rewarded with the odd good moment—one involving a bunch of teens smoking marijuana. However, they’re ultimately a pair of cardboard cutouts of the ‘straight rookie’ and the ‘condescending police chief’, forever one step behind cracking the case.

Cold Pursuit is similar to Moland’s original film, as both are funny and filled with gripping action. In Order of Disappearance is to Lock, Stock and Two Smoking Barrels (1998), what Cold Pursuit is to Grosse Point Blank (1997). Watching bad guys meet their comeuppance in such morbidly funny fashion creates several laughs, but it takes time to adjust and appreciate the black comedy. Unfortunately, I think Baldwin was scared Aakeson’s script would be lost in translation and overcompensates for that by overburdening the narrative. 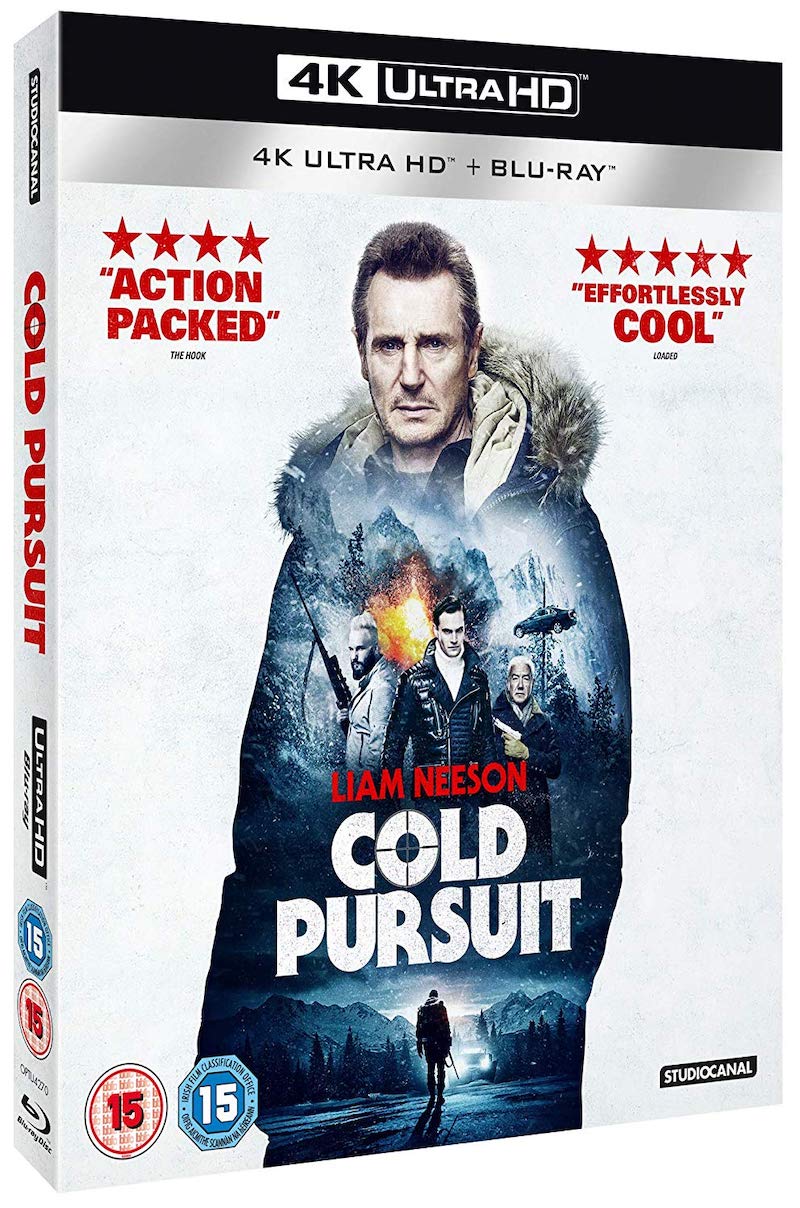 Revenge is a dish best served cold, so the proverb goes, and the delicious 1080p Blu-ray of Cold Pursuit from StudioCanal is unbelievably gorgeous. The snowy setting of the small Colorado town is beautifully crisp and the cool tones enhance the feeling of a frigid winter. Displaying brilliant whites throughout, it’s so clear one can see each snowflake glistening brightly under the sun.

Presented in the feature’s original 2:39:1 aspect ratio, this transfer is almost perfect. Exterior shots resembling the backs of postcards. Unfortunately the same can not be said for the interiors. Black levels and dirty-looking shadows fail to reach the same heights as the brightly lit outside sequences. Whether or not this is due to poor lighting on set, interior shots fail to highlight the finer details of objects. However, this can be easily forgiven as the fine details of clothing textures and facial complexions are distinct in exteriors, especially close-ups. Each crack of Neeson’s aged and weathered skin is visible.

Cold Pursuit’s audio track comes with a Dolby Atmos mix. As a largely a dialogue-driven film, vocals are clear but not spectacular. Placed above the vocals and filling the soundstage are the well implemented atmospheric effects. The tumultuous blizzard winds help establish the winter conditions and the atmosphere of the environment perfectly. George Fenton’s music is subtly mixed and adds natural depth without becoming distracting. Action sequences with gunfire also flow across channels, allowing one to hear every gunshot and ricochet during the final sequence.