James Gunn loves superheroes. Even before he directed Guardians of the Galaxy (2014), Gunn had already dipped his toe into the comic-book genre. His dark comedy Super (2010) was a satirical take on superheroes, and he’s also no stranger to horror with Slither (2006) and The Belko Experiment (2017) under his belt. It’s clear to anyone that horror and superheroes are engrained in Gunn’s DNA.

Before being fired from Disney in 2018, preventing him continuing to work with Marvel Studios, the future of the filmmaker’s new horror project, Brightburn, was suddenly uncertain. Written by Gunn’s brother Brian and his cousin Mark (Journey 2: The Mysterious Island), this twisted superhero movie was originally scheduled for a November ’18 release. After reconciling with Disney and confirmed to return for Guardians of the Galaxy Vol.3, the Gunn’s have finally released their unique re-interpretation of the Superman origin story.

Instead of fighting for “truth, justice and the American way”, director Richard Lester once teased the idea of an evil Superman with Christopher Reeve in Superman III (1983). Decades later, in 2003, Mark Millar wrote a story for DC Comics’ Elseworlds imprint, entitled Superman: Red Son. This played with the ‘what if?’ notion of Superman’s ship landing in the USSR during the Cold War, meaning he grew up to be an evil communist. So the idea of a bad Superman is nothing new, but here comes David Yarovesky’s (The Hive) bold version of the same idea. 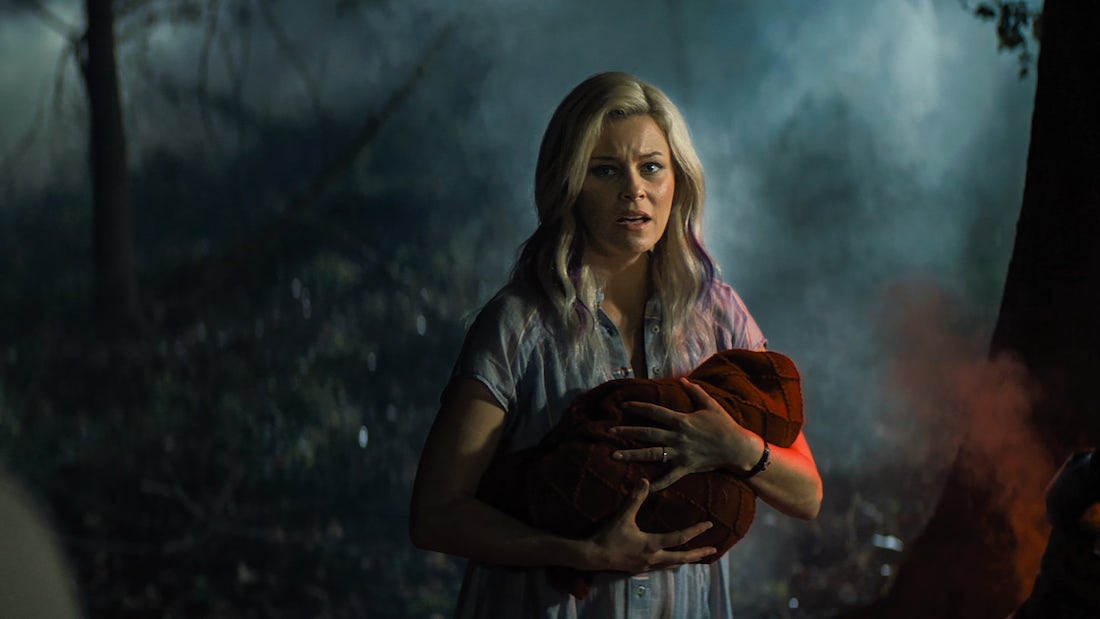 Set in 2006, Tori (Elizabeth Banks) and Kyle (David Denman) Breyer are a couple living on a farm in the titular Brightburn, Kansas, trying but failing to have a child because of infertility issues. However, one night, they experience a miracle: their farmland becomes the crash site for what they discover is a spaceship containing an infant. Much like John and Martha Kent from Superman, they decide to adopt the child and name him Brandon (Jackson A. Dunn). But after living together happily for 12 years, on the cusp of becoming a teenager, Brandon starts to hear voices and realises he’s a little different to everyone else.

Portrayed by Jackson A. Dunn (young Scott Lang in Avengers: Endgame), Brandon is an alien who’s understandably confused and disturbed by the human way of life. The unpredictability of his personality results ins several disturbing scenes—one involving pictures hidden under his bed, and another when he tries to make amends with classmate Caitlyn (Emmie Hunter). Dunn inhabits this character so well you genuinely feel uneasy for anyone he’s left alone with. However, the script never fleshes out Brandon’s personal journey enough…

I’d have liked to see additional scenes of Brandon being hurt or bullied at school. Not because he resembles Damien from The Omen (1976), but because it would help the audience understand why he’s so quick to start doing evil things. In a scene that’s a nice throwback to the director’s previous feature, The Hive, we see Brandon chose wasps over bees… but beyond that telling moment of choice, we only see Brandon being bullied the once. It makes his transformation into an evildoer difficult to comprehend. The kid has one bad day at school and decides to go on a violent rampage? Instead of giving Brandon any meaningful dimensions making his turn to the dark side interesting, he ends up becoming a boring villain fuelled by teen angst. 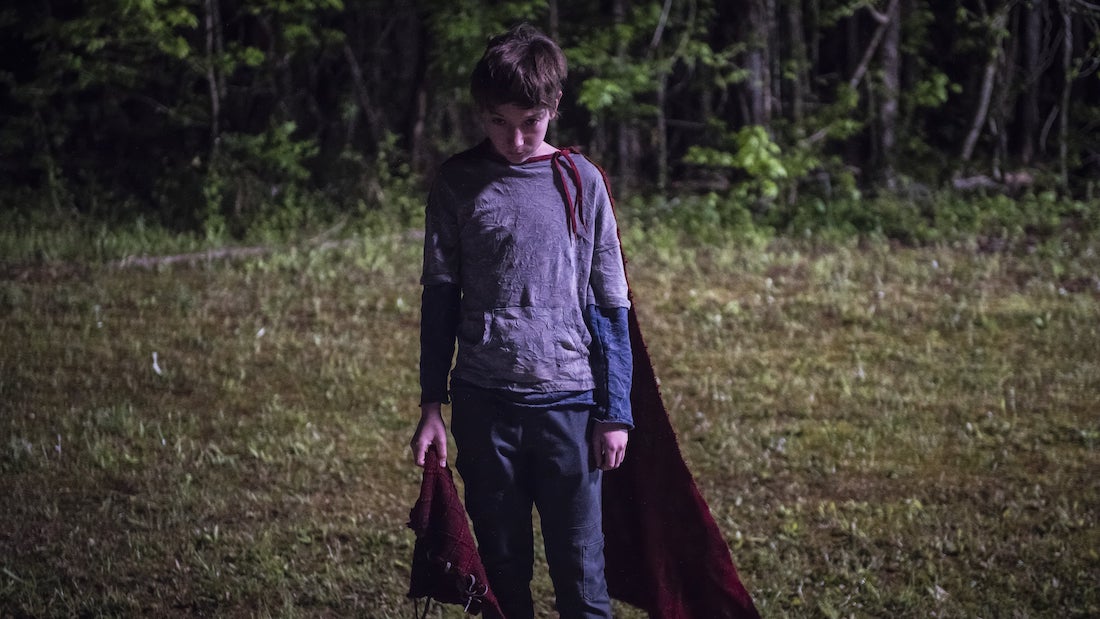 The performances from the supporting cast are solid. As the patriarch of the family, Denman plays Kyle with great charm as a regular guy stumbling through fatherhood. The ‘facts of life’ talk he has with Brandon is sincere and earnest. Unfortunately, his performance is better than the material as he’s the only parent open to the idea his adopted son’s capable of horrific actions, which causes conflict with his wife.

Gunn’s Slither star Elizabeth Banks (Hunger Games) is excellent playing a protective mother. Never giving up on her son, even when she knows something isn’t right about him, Tori’s the kind of mum every kid deserves. She balances the tenderness of her love with the reluctance of facing the terrifying truth about him. While Banks’ performance isn’t as impressive as Toni Collette’s in Hereditary (2018), who played a similar mother character, but she’s undoubtedly a highlight.

Where Brightburn is most effective is when Yarovesky leans into the horror elements, serving up thrills and genuinely disturbing graphic violence. Considering the feature was produced on a tiny budget of $6M, the production values achieved are impressive. The director takes full advantage of Brandon’s superpowers, making great use of VFX by having him hunt his victims in an exciting and dynamic fashion. It results in brutal and gory scenes, especially one involving the glass of a fluorescent light bulb. That should make even the sternest gore-hound wince! 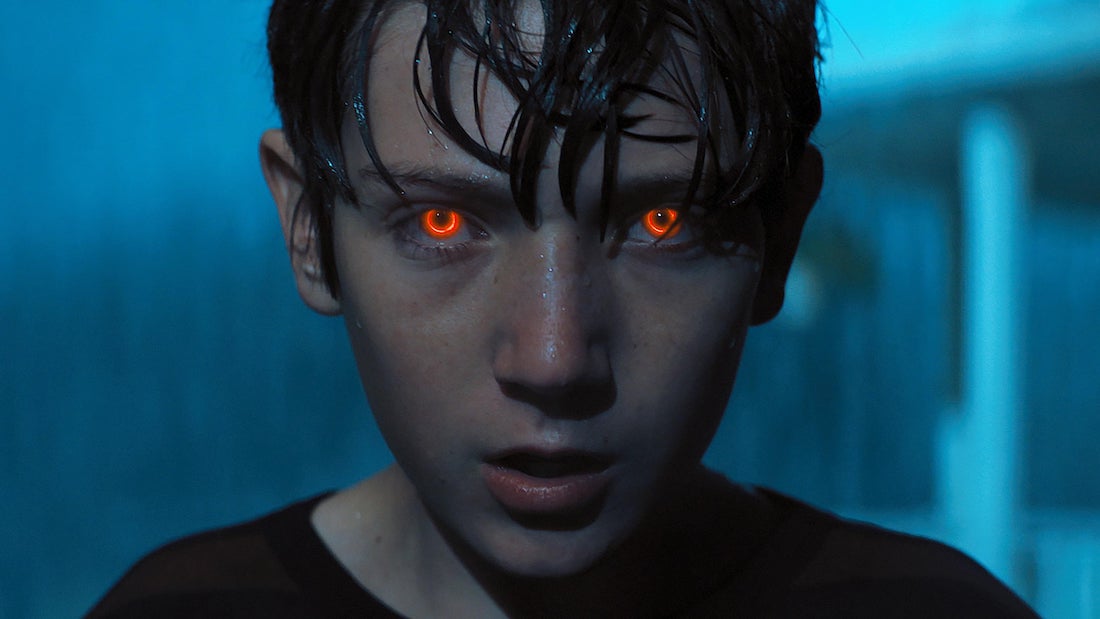 Blood and guts aside, Yarovesky also knows how to build tension. However, I’d argue he relies too heavily on jump-scares. But from Brandon’s creepy costume to the glow of his red eyes outside a window, there’s an unsettling feeling throughout that manages to get under your skin. Some scenes are lifted directly from Man of Steel (2013) but with a sinister tweak. That’s where Yarovesky’s direction excels. Sound is also used subversively, making the fluttering of a cape a warning of danger rather than a sign of hope. With the help of cinematographer Michael Dallatorre, the tight camera angles and careful framing, together with by composer Timothy Williams’ music, create some truly suspenseful sequences as Brandon slowly turns villainous.

Unfortunately, the screenplay is its own Kryptonite. Brian and Mark Gunn have crafted a barebones story. Much like M. Night Shyamalan’s recent Glass (2019), Brightburn is a clever twist on conventional superhero films, reimagining the concept as more of a slasher. But although this exercise in genre mashup is intriguing, it fails to explore some of the questions it raises. There’s not much depth to Brandon’s alienation and his descent into violent outrage. It’s easy to compare Brandon’s character to Dane DeHaan’s from Chronicle (2012), but Brightburn’s script doesn’t lay out the foundations of its antagonist to create sympathetic backstory audiences can relate to. It’s a missed opportunity considering how society is currently busy alienating subcultures, leading to radicalisation and extremism.

I’m a fan of both the superhero and horror genres, so my expectations for Brightburn were admittedly very high—particularly with Gunn’s name attached as a producer. Although it wasn’t as good as anticipated, it was still refreshing to see a different take on a superhero. The story just moved too quickly and, at only 90-minutes, there’s little meat on the bones… and sometimes you need more flesh to become emotionally invested. There’s plenty of suspense here but it lacks narrative depth and, without stronger characterisations, Brightburn ends up feeling underdeveloped.