Joe Cornish became the hot new thing with Attack the Block (2011), his directorial debut about a teenage gang defending their London tower block from aliens. Already a cult favourite in the UK as one half of the “Adam [Buxton] and Joe” comedy duo (who came to fame in the 1990s for their homespun film parodies with toys, before hosting a popular radio show), Cornish was poised to become “the next Edgar Wright”. Indeed, he co-wrote Ant-Man (2015) with Wright before that project changes creative direction (although both retained a story credit), and also fine-tuned Steven Moffat’s screenplay for The Adventures of Tintin (2011) with Wright’s help. Unfortunately, despite his star being in clear ascent, it’s taken a depressingly long time for Cornish to get back behind the camera… but, eight years after his promising debut, we have The Kid Who Would Be King.

There are conceptual similarities with The Kid Who Would Be King and Attack the Block, as both concern teenagers being confronted with a supernatural situation only they can resolve. The difference is that Attack the Block focused on delinquent teenagers, fighting savage sci-fi monsters. The Kid Who Would Be King revolves around younger middle-class teens, fighting more fantastical creatures from Arthurian legend. It’s fair to say the subject matter’s tamer and more family-friendly, but there’s still some spiciness in some of Cornish’s choices as writer-director. 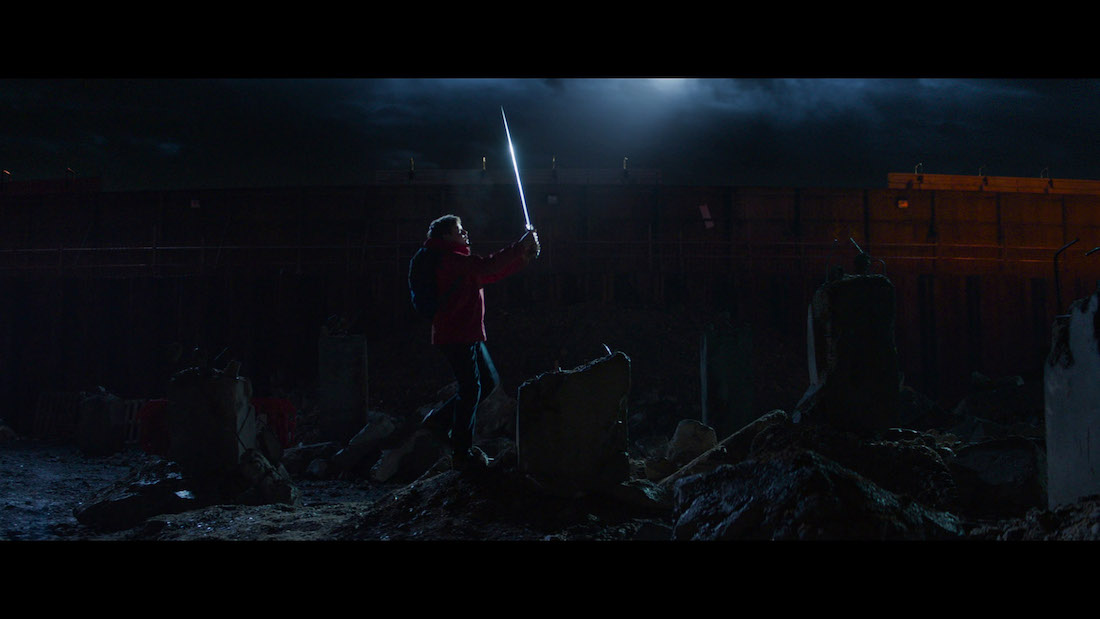 What we have is a modern version of the King Arthur legend with children in the key roles, but not in a ‘Ye Olde Bugsy Malone‘ way. A wonderful animated flashback retells the story of Arthur and his Knights of the Round Table, before jumping into contemporary English suburbia. There we find Alex Elliot (Louis Ashbourne Serkis, son of Andy) and his best-friend “Bedders” (Dean Chaumoo) dealing with school life, victimised by bullies Lance (The Dark Tower’s Tom Taylor) and Kaye (Rhianna Dorris). Alex’s father walked out on his mother when he was little to fight “his demons”, who’s nevertheless become a mythic figure to his son. Then, one day, Alex extracts a large sword from a concrete pillar on a building site and comes to realise this means he’s “The Once And Future King” destined to lead an army to defeat slumbering enchantress Morgana (Rebecca Ferguson).

Soon, an adolescent version of the wizard Merlin (Angus Imrie, son of Celia) arrives through a Stonehenge portal, going undercover as an oddball student at Alex’s school in order to prepare the boy for the coming battle against Morgana and her minions the ‘Mortes Milles’ (undead zombies on horseback with flaming swords). In four days a solar eclipse will appear over the skies of Britain, which will stop time for everyone except Alex and those he knights with Excalibur, giving them a chance to defeat Morgana as she rises from underground to enslave all of mankind. 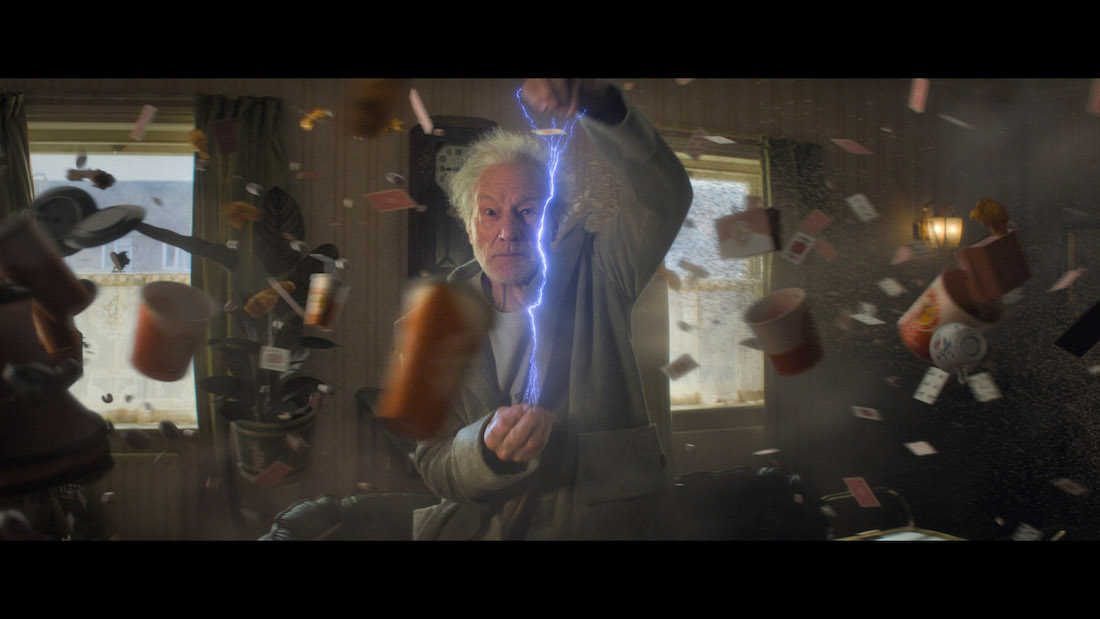 There was probably too much expectation built into The Kid Who Would Be King from those who saw Attack the Block, which has since been heralded as a notable British genre film and geek favourite, not to mention the star-making debut of John Boyega. Cornish, like his friend Edgar Wright, started out as a talented fan and proved his mettle (despite the $8M Attack the Block only making half its budget back), so he’s someone genre-fans are willing to succeed and prove himself further. And there’s no denying The Kid Who Would Be King is an enjoyable follow-up; the type of film we don’t usually get these days, with positive messages and imaginative flights of fancy. But it clearly wasn’t to many people’s taste, as it again only grossed half its production budget—only this time the studio spent $59M getting this made, so 20th Century Fox’s losses including marketing fees rise to an estimated $50M!

The lack of success is unfortunate because the film deserved better. I’ve heard it said the content was too extreme for the target audience, but that complaint doesn’t seem justified to me. Cornish grew up in the 1970s and into the ’80s when films for younger audiences were generally edgier, so he brings some of that old-school feel to bear, but there’s nothing here that’s particularly frightening—beyond a few Lord of the Rings-style villains. Harry Potter’s scarier. 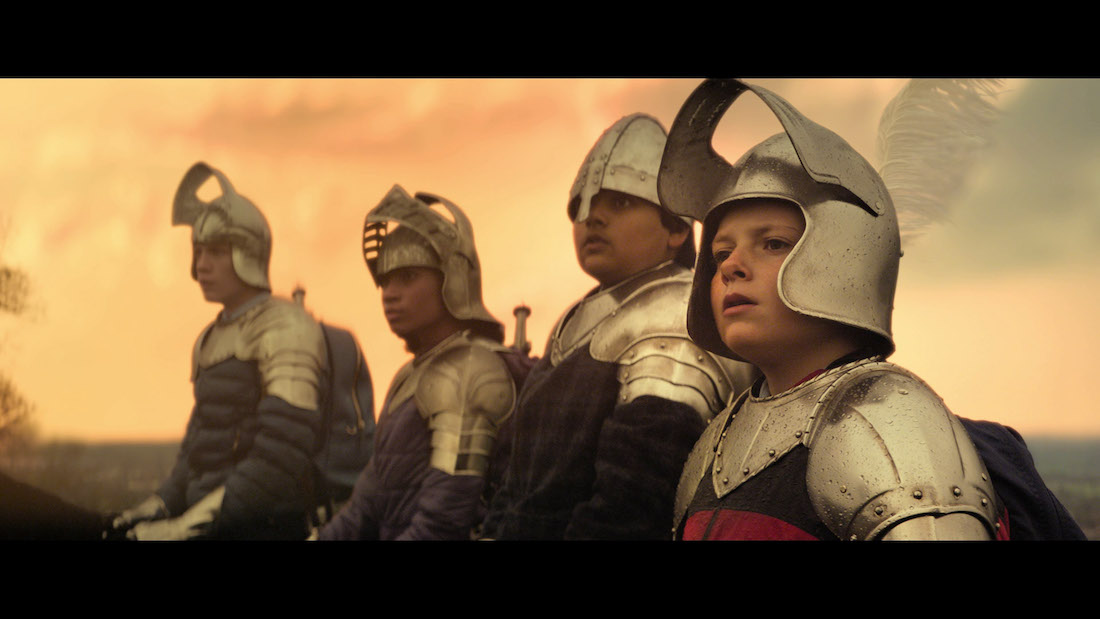 Others pointed to how kids aren’t enthralled by old standards like Robin Hood and King Arthur nowadays, in the age of Marvel superheroes and big-budget fantasy spectacles. That theory has some credence, given how other films based on those same myths and legends have also flopped recently, but again it’s hard to say for sure what happened. Maybe the idea of transplanting Arthurian tropes onto modern kids didn’t compel filmgoers to buy a ticket, pure and simple. There’s certainly the problem that The Kid Who Would Be King has an “obvious” concept where everyone can already imagine their own version of the film upon hearing it. Maybe people couldn’t summon enough enthusiasm for the prospect of kids brandishing swords and a goofy teen version of Merlin turning into an owl.

Cornish’s script does have its problems, too. It’s nowhere near as funny as I was hoping it would be. It sticks to a tone of likeable kids that say things to raise a giggle, but nothing leaps off the screen as being especially memorable or hilarious. It’s foremost an adventure film and gets that Goonies-style element right, with a cross-country mission for the kids and an enjoyable complication that two of Alex’s best knights, Lance and Kaye, start off as being enemies he has to earn the respect of and convince of their own innate decency as people. A lot of the film is about leadership and how it’s demonstrated as one’s ability to bring folk together to fight a common foe, which is a good moral to underscore in today’s divisive society. 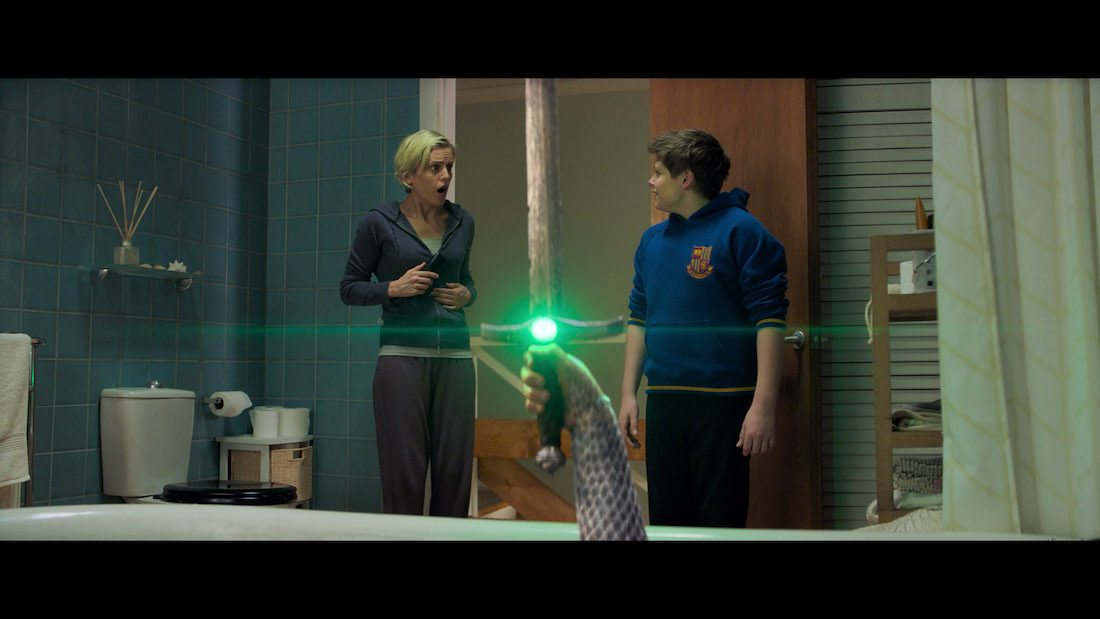 One concern with movies involving kids is how the younger actors perform on camera and, for the most part, The Kid Who Would Be King vaults that hurdle. Louis Ashbourne Serkis acquits himself well and is likeable as Alex the boy king at the heart of the story, although he lacks undeniable charisma that befits the character. I never quite bought into the idea he’s “Arthur” and all that entails. Some of that’s an intentional subversion, as the film’s most obvious “leader type” is Tom Taylor’s Lance, who fights with Alex and struggles to accept this unremarkable kid is “royal” and more important than him. Rhianna Dorris as Kaye is fine, ditto Dean Chaumoo as Bedders, although the latter is perhaps guilty of a few stilted line readings.

The standout performance comes from Angus Imrie, best-known for playing Josh Archer in BBC Radio 4’s long-running serial The Archers, but who’s also an accomplished young stage actor. He’s been in episodes of television (most recently Fleabag), but The Kid Who Would Be King marks his film debut and most mainstream role to date. He’s 24 years old but can play much younger, with his youthful Merlin having the appearance and feel of a boyish Benedict Cumberbatch. If the BBC ever made a prequel to Sherlock set in the 1990s, Imrie’s your man! He’s a lot of fun as Merlin and grabs the narrative by the scruff of the neck once he arrives on the scene, particularly thanks to his intricate gestures when conjuring spells. So much so that the story suffers in the second act when he’s off-screen to allow the other characters to bond without his magic to save them. 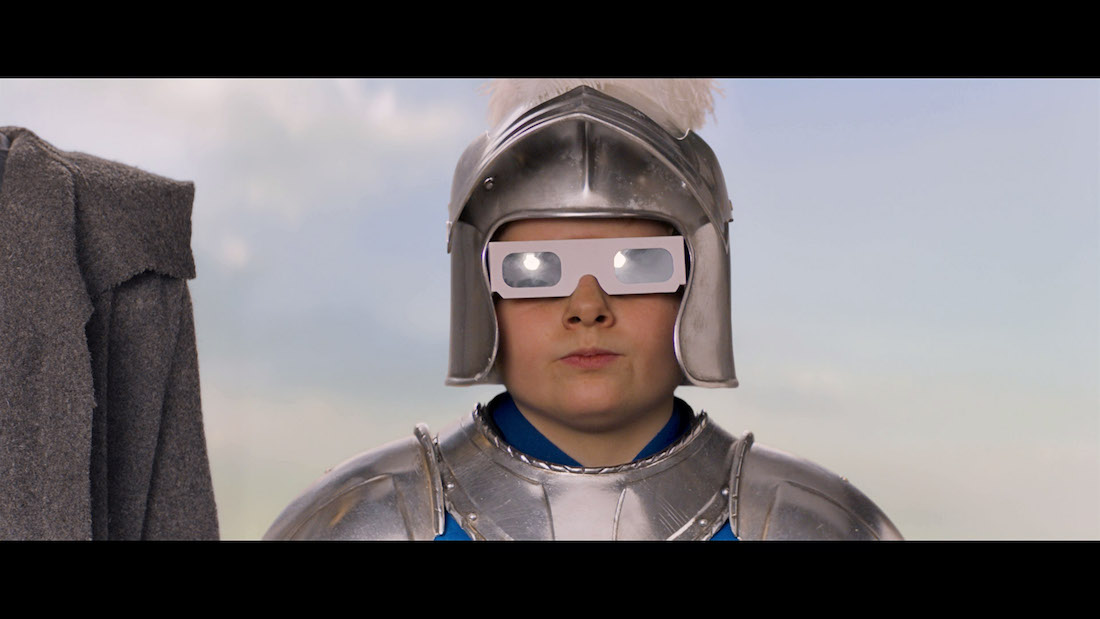 It’s a little insulting to Imrie that the story contorts to have Patrick Stewart occasionally play Merlin in an older form, with the Star Trek actor appearing in a handful of scenes whenever the younger Merlin wants to show a bit of gravitas only a balding head and wrinkles can deliver. It perhaps also a way to get a more recognisable star involved in the project, so it could be sold a little easier internationally. Otherwise, The Kid Who Would Be King is filled with total newcomers and rising stars, with even the old hands only being recognisable to fans of UK TV—like Misfits’ Nathan Stewart-Jarrett, Catastrophe’s Mark Bonnar, and Utopia’s Alexandra Roach. But we also have Hollywood up-and-comer Rebecca Ferguson (Mission: Impossible—Fallout) as Morgana, of course, who seems to relish the opportunity to play a Disney-style “Evil Witch” with a lot of whispering tones and graceful movements in a dress made of vines. However, similarly to what happens with Angus Imrie occasionally, Ferguson is quite often transformed into versions of a CGI alter-ego that sucks away her actual screentime.

It’s much too long at 120-minutes, sadly. The story fakes an ending much earlier, before transitioning into a more extended and rousing finale that covers some earlier sins. The best thing about The Kid Who Would Be King is how cleverly it weaves in Arthurian lore to modern times, then finds a way to get the kids all wearing armour and protecting their “castle” (school) from its enemies. The Lady of the Lake’s arm protruding from a full bath, a firebreathing “dragon” to slay, shields made from triangular street signs, gym benches attached to cars as battering rams… the action set-pieces that fill the last act of the movie are its saving grace.

I only wish Joe Cornish had found a way to tighten up the story and cut out maybe 15–20 minutes from the middle, where the story meanders for a little longer than feels necessary. It could also have been a lot funnier. But it’s still reliable fun and a great movie for kids around the age of 11, which might even make them think about how they treat other people and want to behave. If Cornish just wanted to update an ’80s-style kids film to the 21st-century, based on 5th-century material, The Kid Who Would Be King gets the job done. 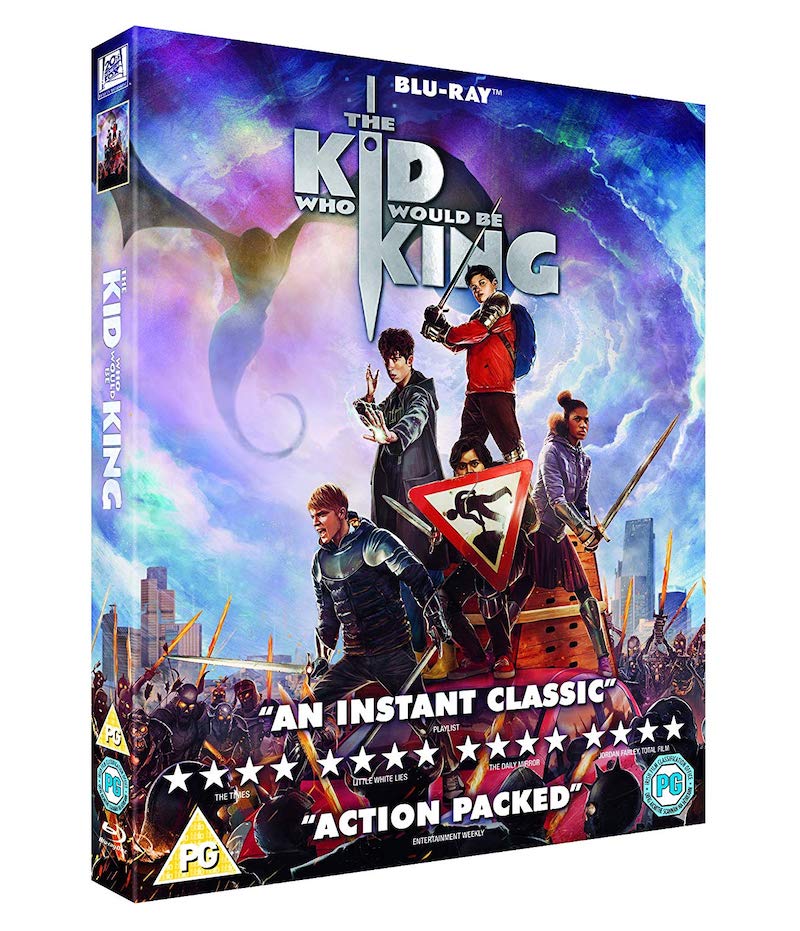