After a disappointing second series, which caused debates over whether creator Chris Chibnall would bring more credible crime and grief from the Wessex community of Broadchurch next time, rather than delve into private lives of the coastal town’s inhabitants, series 3 returned to the crime procedural formula that made it the best crime drama ever made. Chibnall deserves all the credit for Broadchurch bouncing back so strongly, which makes it seem like Doctor Who will be in safe hands.

David Tennant and Olivia Colman return as DI Alec Hardy and DS Ellie Miller, three years after series 2 ended. The time jump allows those who gave up on the show to not feel quite so out of the loop, which allowing the writers to leave Joe Miller’s trial in the past. 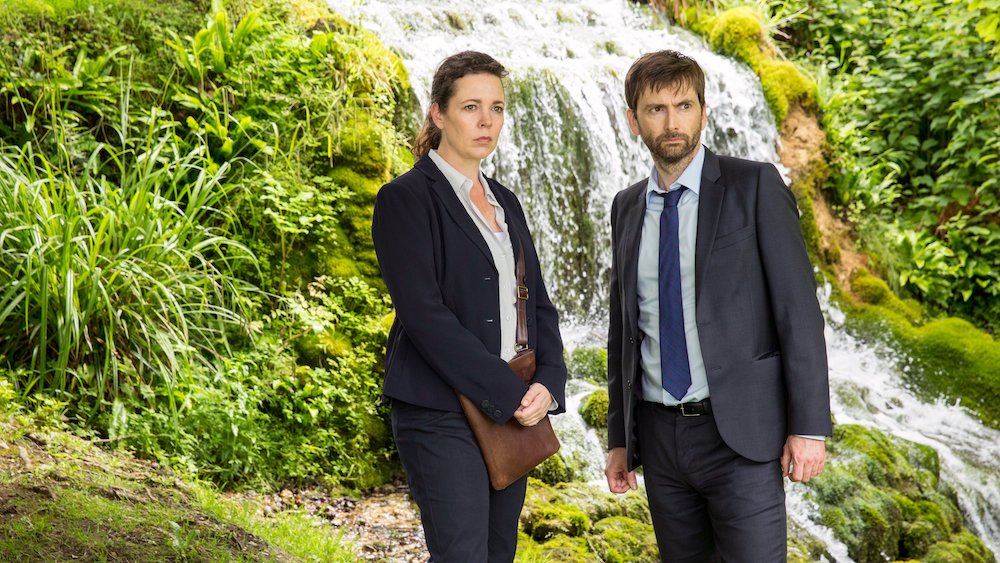 Julie Hesmondhalgh (Coronation Street’s Hayley Cropper) is mesmerising as Trish Winterman, a victim of a violent rape at her friend’s 50th birthday party. The first trick to series 3’s success is taking the action away from Broadchurch itself, moving it to a neighbouring village. Olivia Colman’s Miller gets to interact with suspects she doesn’t know, and who aren’t as involved in the Joe Miller case, making her a thousand times more interesting to watch. Lenny Henry and Sarah Parish are some of the new additions to the show, underused as a whole but engaging whenever they’re around.

Post-sexual assault police procedurals are often uncomfortable to watch, but Broadchurch turns it into both a public service broadcast and acting masterclass from the three leads. The show doesn’t wash over the bleak and degrading aftermath of the horrifying crime, either — from the soiled clothing to the dirty swabs. It also unflinchingly forces viewers to confront any prejudice they may have about the victims of sexual assault. Trish is a well-rounded middle-aged woman with a complicated past in terms of relationships, and thus a refreshing character to see in any drama. 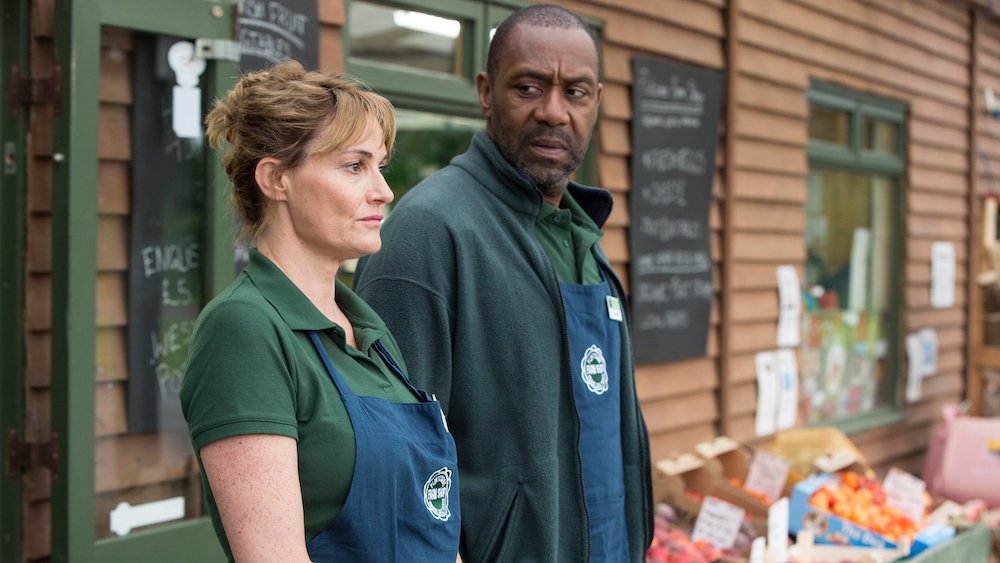 Other familiar faces are Beth Latimer (Jodie Whittaker), shoehorned into the new story because she now works in a sexual advice clinic. Her now ex-husband Mark has published a book about his experiences, while young vicar Paul (Arthur Darvill) plays peacekeeper between the couple. These leftover strands from series 2 are the least interesting part of the new story, feeling like unnecessary thread between two unconnected crimes. 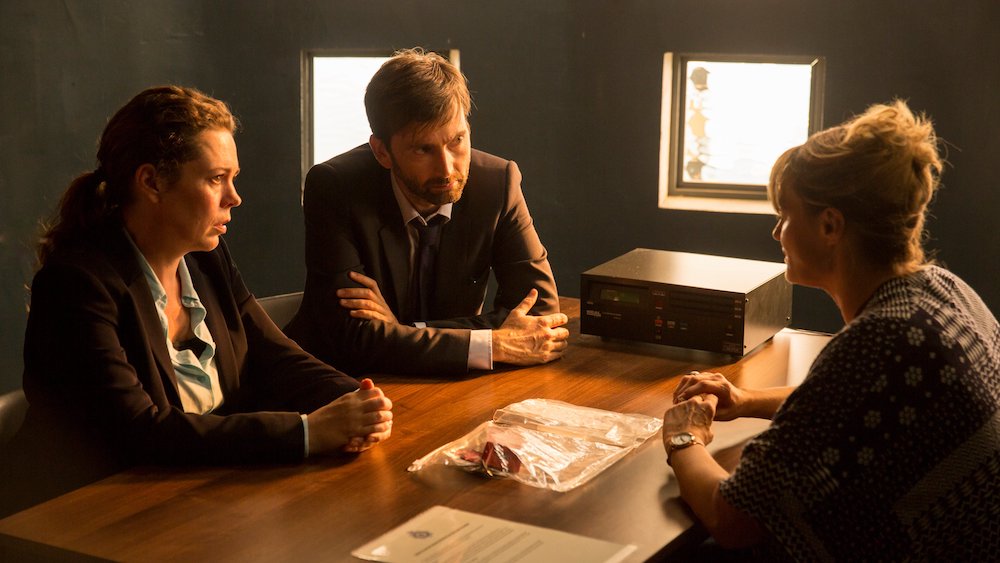 The plight of the newspaper editor (viciously played by Carolyn Pickles) is totally irrelevant to any of the plots, but the point being made about the decline of local print media is certainly important. As Trish’s case gets more and more interesting these characters become more and more whiny. In a show that’s often harsh to men, it becomes even harder to feel sympathy towards Mark, who’s still grieving the loss of his son at the expense of his relationship with his wife and daughter.

Hardy is still struggling as least empathetic person around, as he attempts to connect with his daughter and goes on the world’s most awkward date, but this series again belongs to Olivia Colman. Ellie Miller, now a single mother to a wayward teenager, regularly bursts into feminist rants regarding the fight to be respected as a female member of law enforcement, and lashes out at their seedy selection of male suspects regarding their brazen attitude to women and sex. There are threads about online porn, teenage sexting, and adultery, that forces viewers to really consider what sex has become in the 21st-century, even if it’s hard to watch at times. Never has an ITV crime show been as modern and as political as series 3 of Broadchurch. 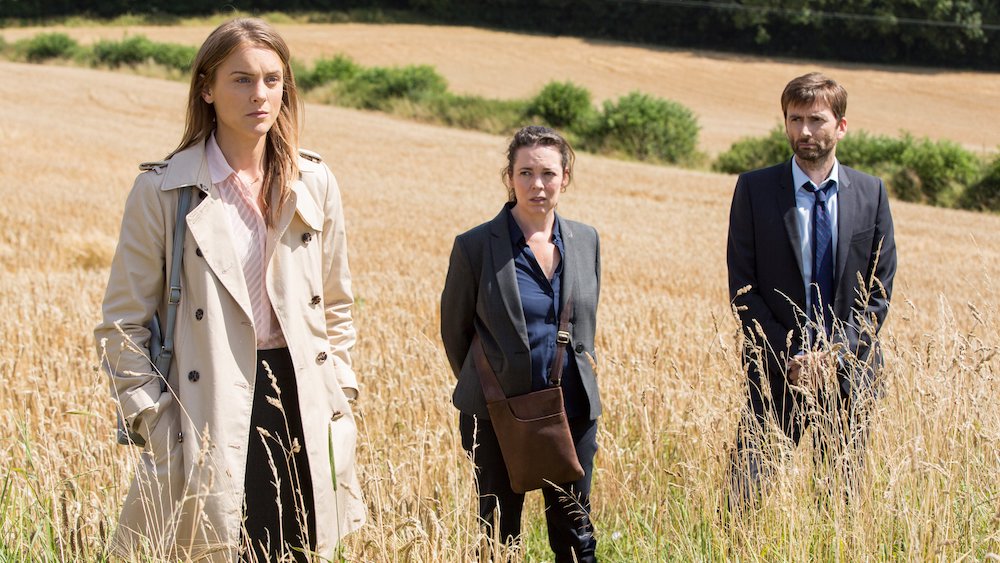 The third series was a welcome reminder of what hooked 10 million Brits during its debut. The narrative is full of suspects and red herrings, with clues carefully drip fed with plenty of misdirection. The suspicion subtly shifts from one person to another, held together by wonderful performances. The ride is probably better than the climactic destination, but that could be said for any police procedural. Unlike many other crime dramas, the audiences are made to care for both the detectives and the victim, while the suspects are three-dimensional people.

The ending packs less of a punch than the original finale, lacking any shocking twists or turns in the road, but it leaves the case tied up with a neat bow, as the sun sets over the Jurassic Coast. There wasn’t any narrative point to all the red herrings in the end, beyond keeping audiences gripped each week and eager for the next instalment, there wasn’t really any logical way armchair sleuths could determine the culprit’s motives… which means the big reveal ends up being a slight disappointment. But while the last ever episode of Broadchurch might not have been the most satisfying hour, it was one of the darkest. The third chapter of this ITV drama never stopped being unflinching in its portrayal of sex, desire, and the horrible crime of rape, as difficult to watch as it was gripping.