Given the title “Nailed”, you’d be forgiven for thinking the big climax of Better Call Saul’s penultimate hour would involve an exciting set-piece where Mike (Jonathan Banks) uses his homemade ‘spike strip’ on one of Hector Salamanca’s drug-carrying trucks. Instead, it came down to Chuck (Michael McKean) simply arguing with an employee of a xerox shop, and was all the better for it. This, ladies and gentlemen, is the genius of a character-based series like Better Call Saul.

Before we get to the final scene, the repercussions of Jimmy’s (Bob Odenkirk) sabotage of the Mesa Verde paperwork was the catalyst. Chuck braved venturing into the outside world to head up HHM’s appearance in the Banking Board with their new client present, but was humiliated when a discrepancy in the address of Mesa Verde’s proposed new branch (Jimmy had painstakingly switched the digits ‘116’ to ‘161’) resulted in a six-week delay. Understandably angered by HHM causing such a mess, so early in their new business relationship, Mesa Verde quickly re-signed their affairs back to Kim (Rhea Seehorn).

The great strength of this series is that Chuck isn’t an outright villain, just like his brother Jimmy, and seeing him defeated in such an underhanded way wasn’t very pleasant. We may have been annoyed he sweet-talked Mesa Verde out of signing with Kim last week, but he did so in a legitimate and professional way. And his reasoning was sound, as I still don’t quite understand why a huge company like Mesa Verde would think a one-woman operation like Kim’s best for such a huge workload. Instead, Jimmy’s victory over Chuck rang quite hollow for me. 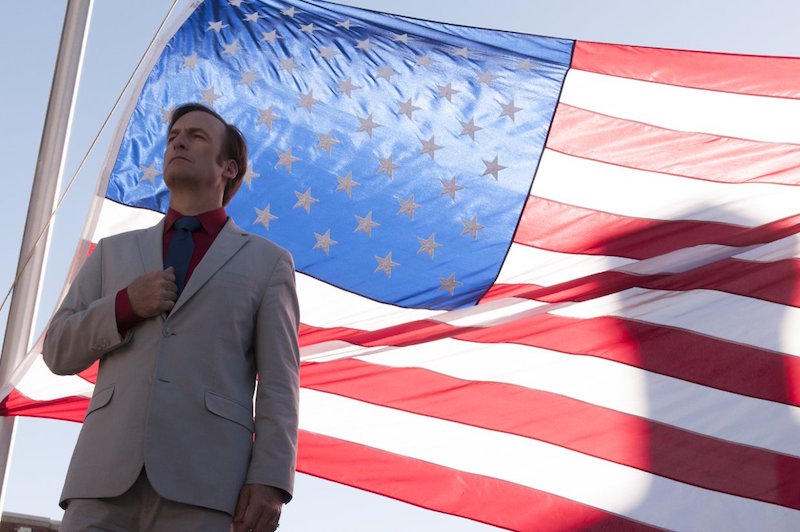 When Chuck later deduced how his brother managed to trick him into making such a schoolboy error, and called Kim around to grandiosely present his theory (in front of Jimmy, who maintained it was a lie), there was a beautiful and unexpected reaction from Kim. At first, it seemed like she was blind to understanding how far Jimmy might stoop to ‘help her’, as she surprised Chuck by giving him a few home truths about his unsupportive, jealous attitude towards Jimmy’s career. You also sense that Jimmy wasn’t entirely happy about seeing Kim stick up for him, when he doesn’t deserve. But afterwards, back in the car, Kim furiously punching Jimmy’s arm in silence spoke volumes: she may not want to even contemplate it, or accept the truth of what Chuck said, but deep down she knows Jimmy falsified legal documents. Trouble is, she can’t deny that his plan worked and she simply can’t bring herself to refuse Mesa Verde’s business by informing them of the deception.

It was also interesting to note Kim and Chuck’s bedroom scene later than night, which visually echoed Chuck and his wife Rebecca’s in terms of lighting and camera position. (A subtle nod that Jimmy’s life is slowly morphing into that of his brother’s, at his peak?) In this scene, it was undeniable that Kim knows what Jimmy did, as she asked him to ensure there’s no loose ends that Chuck could pull on to unravel his plot—but in a roundabout way, reminding me ever so slightly of latter-day Skyler White on Breaking Bad. Similarly, it seems that Kim is more aware than ever that her lover’s a bad man, but is wiling to overlook that if it benefits her.

As a side story, “Nailed” actually opened with the sequence I presumed would cap this episode, with Mike in a ski mask using his ‘spike strip’ to blow the tyres of a truck crossing into the US from Mexico with $250,000 hidden in said tyres. Mike’s plan went without a hitch; taking a sizeable chunk out of Hector Salamanca’s business as payback for being pressured to change his story to the cops, which will now make a good nest egg for his family. Mike was so pleased with himself (spying on Hector having a hissy fit in his restaurant, having to take some pills), that he even bought the house a round of drinks at a local bar. He smirked, too, which is essentially a huge cheesy grin for someone like Mike.

However, the small tragedy of Mike’s story is how doing bad things has a knock-on effect you can’t ever foretell. (The exact lesson Jimmy learned by the last scene, but we’ll come to that). For Mike, clever Nacho (Michael Mando) realised he was involved because the truck driver wasn’t harmed during the robbery—and the only person in town, with those set of skills, but a moral code not to kill, is Mr Mike Ehrmantraut. I was pleased Nacho didn’t demand Mike give the cash back, as he also hates his boss, and all he was worried about was Mike’s hope the cops would get involved and their investigation would take them to the Salamanca’s. Self-preservation. Unfortunately, that won’t happen, because the cops don’t know anything about the robbery because a passerby freed the driver, who called the Salamanca’s, and Nacho tied up this loose end by killing the “good samaritan”. Mike may have his quarter mill, but it’s tainted with blood. Even when you try and be good, bad things happen in bad situations. 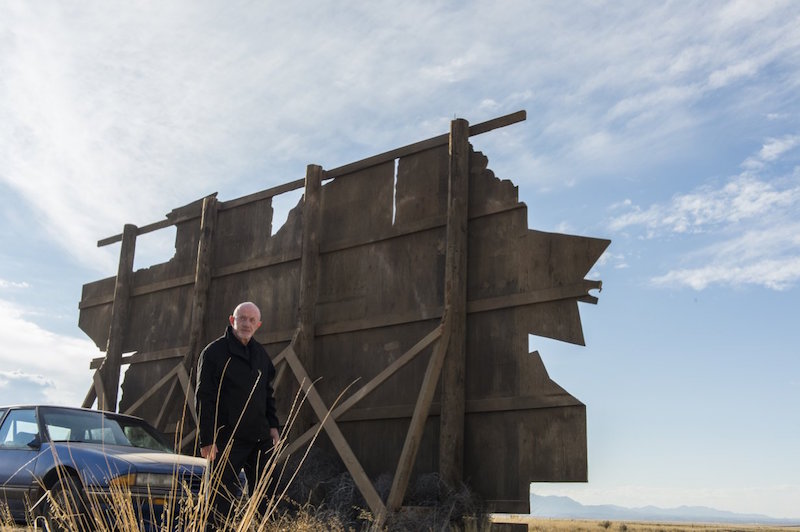 Finally, the scene everyone will be talking about. As Mike found with the ‘butterfly effect’ of robbing the Salamanca truck, you can never predict the consequences of your actions. They rippled outward in ways you can’t fully control. Concerned that a worker at the all-night xerox shop he used to falsify the Mesa Verde document will reveal his presence there to Chuck, who’s indeed sent his aide Ernesto (Brandon K. Hampton) to interrogate every xerox shop in town, Jimmy was forced to bribe the employee to say he was never there and erase the CCTV footage of his presence. So when Chuck arrived late at night, looking for a witness to the crime he suspects Jimmy of, he was instead confronted by a paid-off irritant who can’t corroborate anything. Increasingly exasperated, and with Jimmy secretly looking on from outside across the street, a combination of high emotions and Chuck’s electrical phobia led to him collapsing — and not before banging the side of his head on a counter, rather violently. And poor Jimmy, who loves his brother, for all his faults, could do nothing but watch from the darkness, pleading for someone to call 911—as appearing to help Chuck would be too much of a coincidence and give the game away.

So what happens next? Chuck is one of a handful of characters that Better Call Saul has some flexibility with, as he wasn’t a part of Breaking Bad. That’s not to say he’s dead in the future, or that we just never heard about Chuck because he was never pertinent to the storyline (or existed in the minds of the writers, let’s face it), but would they kill him this far into the show? Is there more to do with Chuck? Has the outstayed his welcome? If we do lose him, it will be a key factor in the development of Jimmy’s psyche, pushing him closer to becoming ‘Saul Goodman’. The absence of Chuck would mean he’s free to be the person he wants to be, without having to lie or tow the line. But is that a wise move for the show? Michael McKean’s a strong presence on the show, and I was rather hoping we’d see him overcome his phobia and become more of a force in the outside world. But there’s a chance season 3’s being tee’d up to move on from Chuck and HHM, focusing on Jimmy and Kim’s new legal practices.

I’d be surprised if Chuck will die as a result of his injury, but if you’re looking for a compelling way to end a season, a notable character’s death that will create a deep sense of guilt in his only living relative… well, that’s a tough one to refuse, dramatically speaking.