This year has delivered fantastic movies where a musician or band’s discography has served as a narrative focal point. We’ve already seen Taron Egerton’s Academy Award-worthy performance as Elton John in Rocketman (2019), before Danny Boyle’s Yesterday (2019) gave us the timeless classics of The Beatles. Now, standing as both a touching coming-of-age story and a jukebox musical, writer-director Gurinder Chadha delivers Blinded by the Light. A lively crowd-pleaser that’s a charming ode to teenage dreams and a loving tribute to Bruce ‘The Boss’ Springsteen.

It’s been nearly 20 years since Chadha broke out with Bend It Like Beckham (2002) and the British-Asian director has never been able to replicate that success. She always gives a unique and honest perspective of someone with Asian heritage growing up in a western culture. Adapting the memoir “Greetings from Bury Park: Race, Religion and Rock N’ Roll” by author Sarfraz Manzoor (who also co-wrote this script), Chadha injects the same humanising element she brought to her previous features. Blinded By the Light marks a return to form for her.

Taking place in 1987, 16-year-old Javed (Viveik Kalra) is a sweet and sensitive soul who craves something beyond the life-draining borders of Luton, England. His Pakistani parents insist he follows the family’s expectations of a career in law or medicine, instead of becoming a writer. Javed’s life is turned upside down when rebellious classmate Roops (Aaron Phagura) introduces him to the thumping music of Bruce Springsteen. The lyrics prove to be the exact escapism and uplifting motivation Javed needs and, as he finds his own self-confidence, he chases the girl of his dreams, Eliza (Nell Wiliams), whilst pursuing his own ambitions. 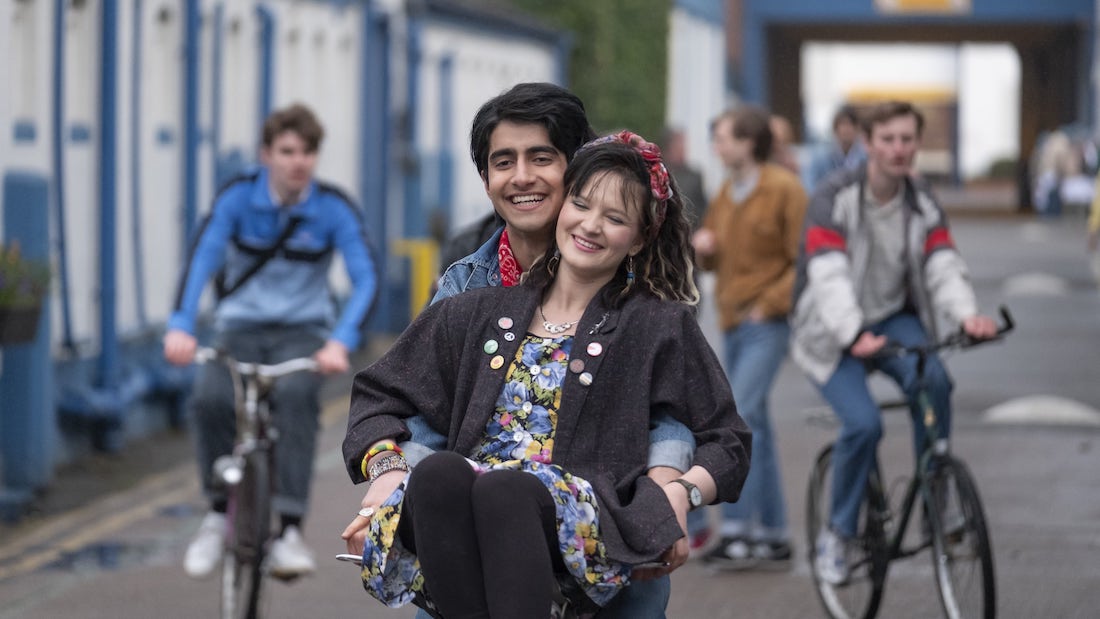 To quote ‘The Boss’, “You can’t start a fire without a spark”, and Viveik Karla is that spark. As a relative newcomer with only a few credits next to his name, the actor sustains off-the-charts likability with acting chops to match. His performance is endearing and he’s perfectly suited for the timid, ingenious Javed. In some scenes it’s obvious he lacks experience as he delivers his lines quite flat, but his sincerity and boldness propel his performance onward. Kalra captures Javed’s journey as he gains the confidence the more he listens to Springsteen. He wears the attitude like he wears sleeveless flannel shirts and denim jackets, but remains charming enough that he can remain a quiet outsider. Both Javed and Springsteen are the heart and soul of Blinded By the Light and it’s a testament to Karla’s ability and positive energy that he grabs the hearts of the audience as much as Springsteen lyrics.

The performances from the rest of the family are charming if a little forgettable. Javed’s mother Noor (Meera Ganatra) is patient and empathetic towards her son, whereas his older sister Shazia (Nikita Metha) is the typical sibling who isn’t afraid to give Javed much needed perspective when called for. The father (Kulvinder Ghie) is wonderfully written, despite filling many stereotypes of a conventional South Asian patriarch. His performance is both heartfelt and hilarious, humanising the character, and you feel the tension he adds to any scene he shares with his son. He never serves as a villain to Javed, merely as a roadblock, making sure his son chooses the right path. He also had a rough relationship with his father whilst he was a child. However, it would have been nice if Chadha dived into Ghie’s motivations deeper to explain his actions.

The supporting cast is spot on. Nell Williams (Game of Thrones) is as sweet as Eliza as she was playing a young Cersei Lannister. An activist and girlfriend of Javed, her character receives the most development out of the side characters and their relationship never feels disingenuous. Hayley Atwell (Agent Carter) as English teacher Ms Clay adds a required dose of the Dead Poets Society (1989) style inspiration Javed needs, recognising his talent and insisting he was “Born To Run”, encouraging him to pursue a career as a writer. Aaron Phangura (Doctor Who) as Roops, Javed’s friend that introduces him to Springsteen, is decent despite low screentime, so their friendship is largely unexplored. His character is never fully developed and it’s difficult to believe the two are best friends. The same goes for Javed’s other friend Matt (Dean-Charles Chapman). Both friendships could have been explored a little more in-depth as the characters serve an important role as they enter Jared’s life in various phases. 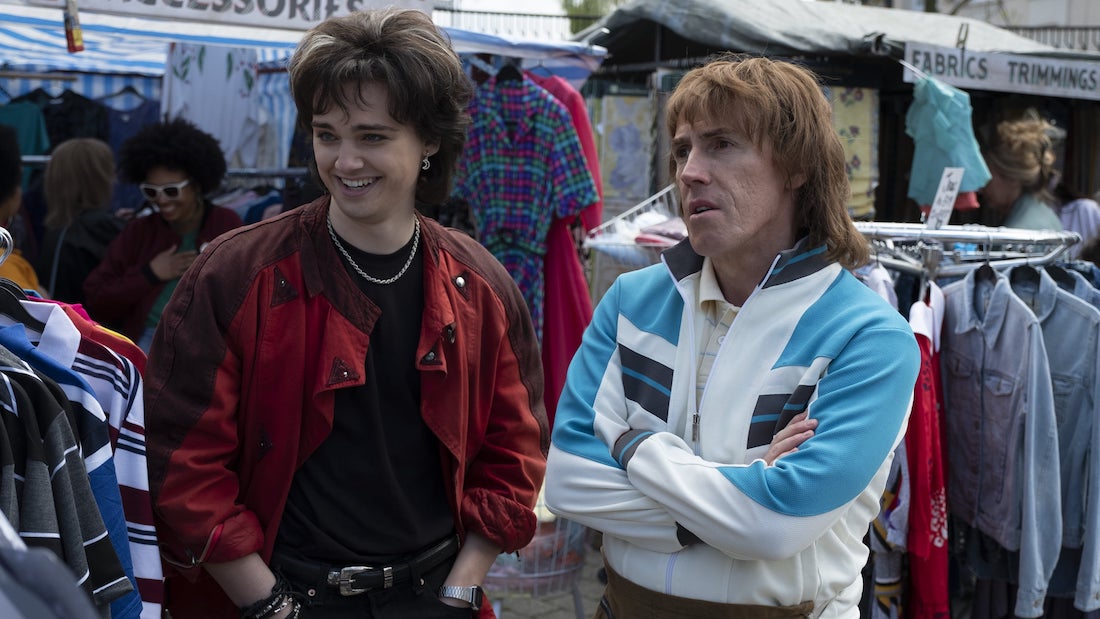 As Chadha unfolds the more standard aspects of her coming-of-age story (the mandatory teen romance, alienation, and self-discovery), she also places it amongst a realistic backdrop of 1980’s Britain. With a background similar to This is England (2006) the director doesn’t shy away from the gritty realism and economic recession of Thatcher’s Britain. For every Flock Of Seagulls hairstyle and flamboyant Boy George outfit, there’s Islamaphobic graffiti and the National Front looming in the shadows. Racial slurs are shouted and urinating through the letterbox of Javed’s friend’s house is a harsh reminder of what happened in Britain less than 40 years ago

I’d like to think, as a country, this behaviour has been left in the past. Although, in modern-day post-Brexit Britain, it doesn’t seem too dissimilar. However, in a similar vein as Bend It Like Beckham, Chadha knows how to effortlessly clash cultures amongst comedy. The racial tension is never a distraction. She’s always created internal perspectives of a Pakistani family within western society and Blinded By the Light is no different. The director eloquently integrates the racial issues within the narrative and Javed’s story arc. A standout scene of Javed and Roops howling the lyrics to a group of skinheads will make you smile with glee. Even with this dark cloud hovering over the story, Chadha’s usual optimism and magical feel-good style shines through like a ray of sunshine.

Just as much as Chadha successfully captures the atmosphere of a 1980’s Britain, the director also captures how music can act as a universal language and a form of escapism. As Javed plays his Springsteen cassette for the first time, the director focuses on the serenity that everyone feels when they hear lyrics they can relate to. The words to “Dancing in the Dark” are just about a singer in New Jersey, as much as they are about a teenage Muslim in Luton. It’s a language that has the power to speak to everyone’s hopes and frustrations. 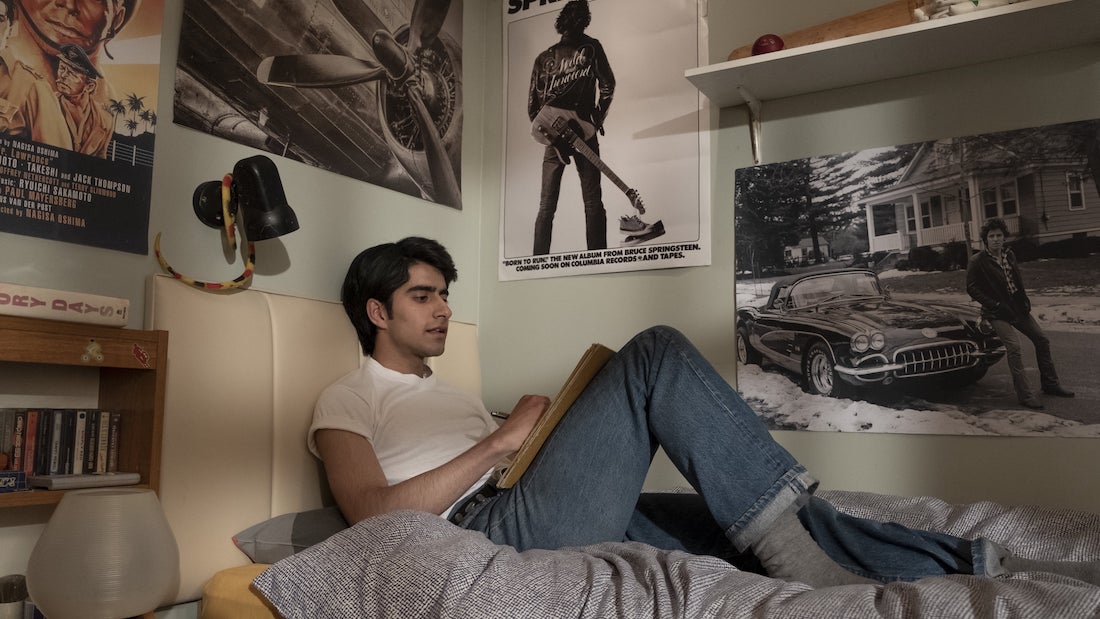 Everyone, including myself, can remember a song/band/artist they connected to on a first listen. Something that defines one’s life and emotions so specifically, you could’ve written it yourself. Like Javed you read every article in the (then) weekly NME idolising and studying their every move. Chadha takes the importance of music and sustains it for almost the entire two-hour runtime. Whether you like Springsteen or not, this is something that everyone can appreciate making Javed’s story even more relatable.

In total, 17 Springsteen tracks make an appearance and Chadha places each one skilfully with intent to help structure the narrative. There are several sequences that are incredibly cliche and so corny they’d give West Side Story (1961) a run for their money. A local flea market provides the setting for a romantic serenading of “Thunder Road”. Whereas another scene Javed and Roops hijack their college radio station to blast “Born to Run” over the speakers, creating a flurry of dance numbers and singing throughout the sixth form corridors.

Javed embraces the music to tackle prejudices in the college canteen, to work up the courage to kiss a girl and pursue his passion of becoming a writer. The characters sing and dance but not to the extent of High School Musical (2006), so it works more like John Carney’s Sing Street (2007). It’s a vibrant celebration of how powerful it can be when the right piece of music is paired with the right scene. As cliche as it may be seeing the town of Luton burst into song, you can’t help but shamefully adore it. 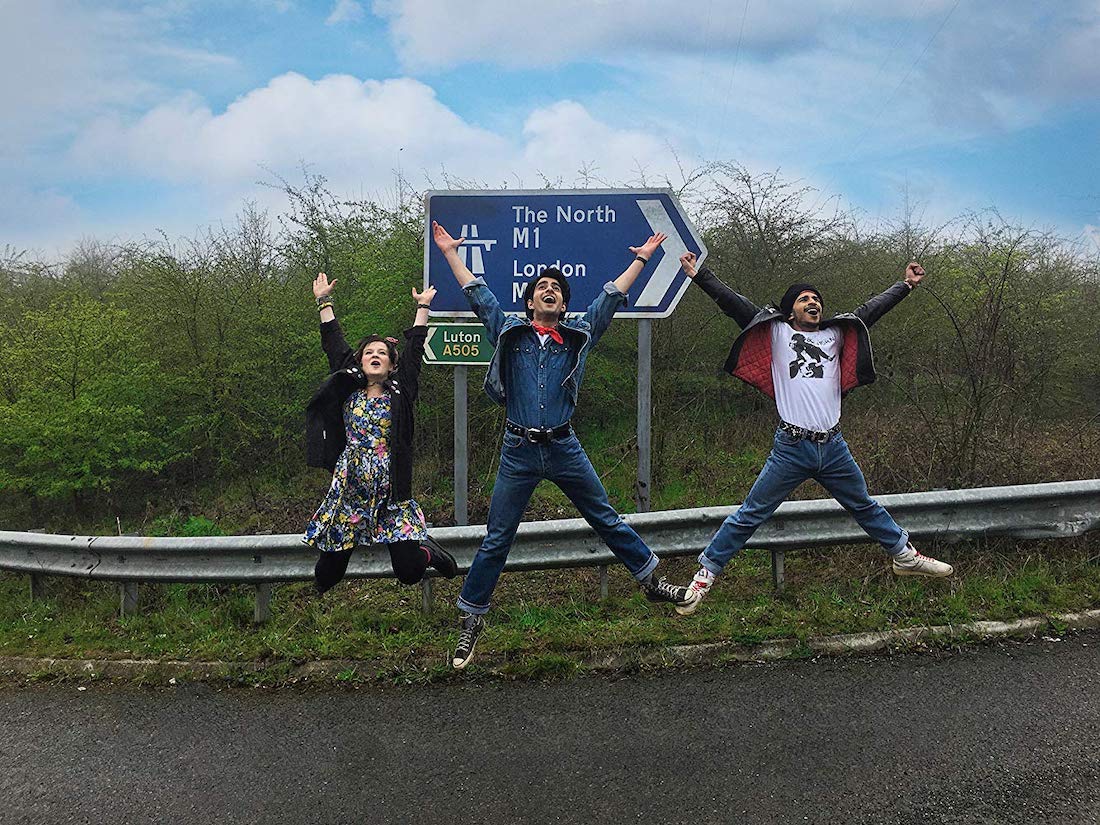 To capture the power and impact of the legendary musician’s lyrics, the director uses his words to literally dance on to the screen. Similarly to how Edgar Wright used the words to “Harlem Shuffle” in an early sequence of Baby Driver (2017), the lyrics act as subtitles and a fundamental part of the visual aesthetic. By delivering them in this way, Chadha demands her audience to pay attention. Read the raw emotion of the music and watch how Javed gets lost in his own world between each headphone. If you’re a fan of Springsteen, the music will most likely work on an entirely different level. However, if you’re a casual listener, it’s understandable how the visuals could work more as a distraction and a patronising exposition to the characters’ emotions. Whichever category you fall into, there’s no doubt you’ll be toe-tapping along to each song.

There are several moments throughout where I cringed at the cliches and some of the musical numbers. The familiar theme makes the narrative somewhat predictable, as it’s similar to directors previous work. However, Chadha has created a feature that celebrates creativity, pursuing your dreams, and the power of music. Javed’s story of becoming infatuated with a band/artist is something we all can relate to. It’s simple and inspirational with elements of Cameron Crowe’s Say Anything (1989) mixed with Nick Hornby’s novel High Fidelity. If you want to avoid the mind-numbing glut of Hollywood blockbusters this summer, then Blinded By the Light is just the lighthearted movie you need. 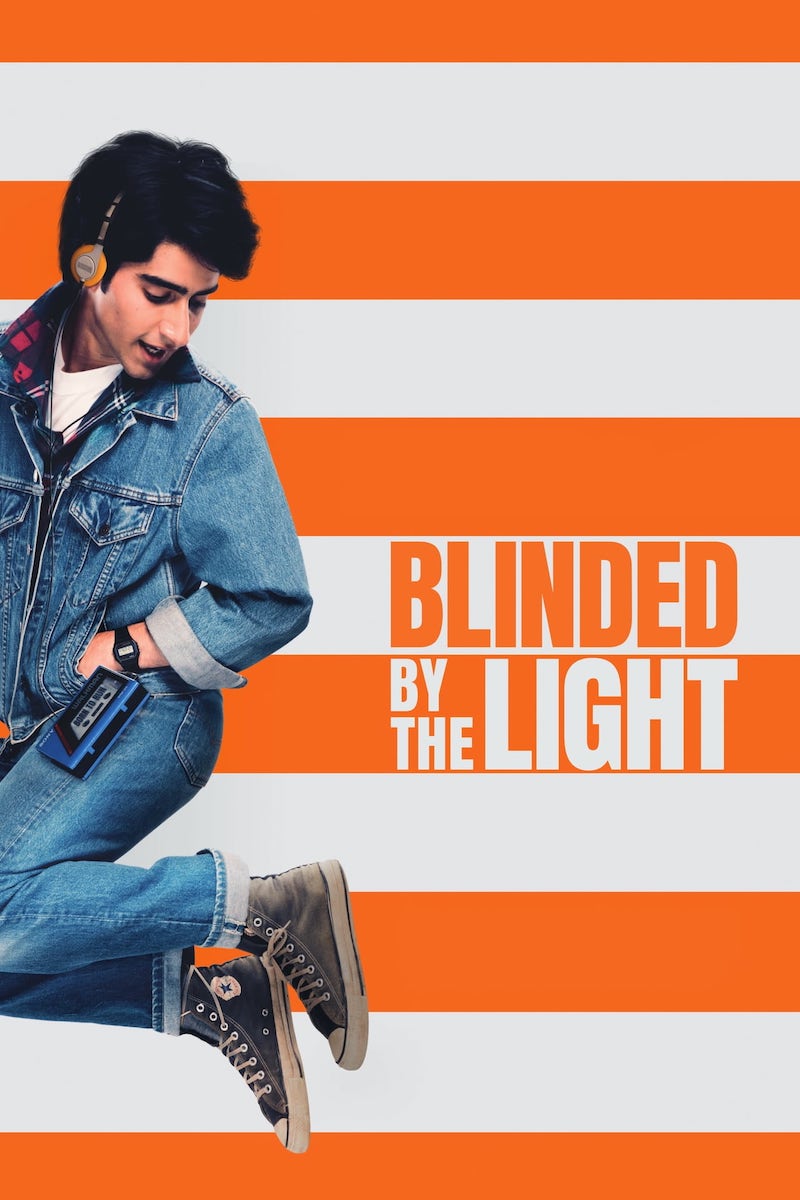