In the midst of heartbreak after splitting up from his girlfriend in Madrid, Jesse (Ethan Hawke) decides to travel by train to Vienna for his flight home to the US. It’s on this train journey he meets Céline (Julie Delpy), a French student on her way back to Paris after visiting her grandmother in Budapest. Ethan can’t afford to rent a room for the night before his morning flight and, after the two hit it off, he persuades Céline to join him for a night of wandering the streets of the Austrian capital.

Director Richard Linklater couldn’t have chosen a more stunning location to set the first of his ‘Before’ trilogy (followed by 2004’s Before Sunset and 2013’s Before Midnight). Vienna’s regarded as one of the most romantic European cities and this comes through with sweeping shots of the loved-up couple strolling through the famous Maria-Theresien-Platz just before dusk. 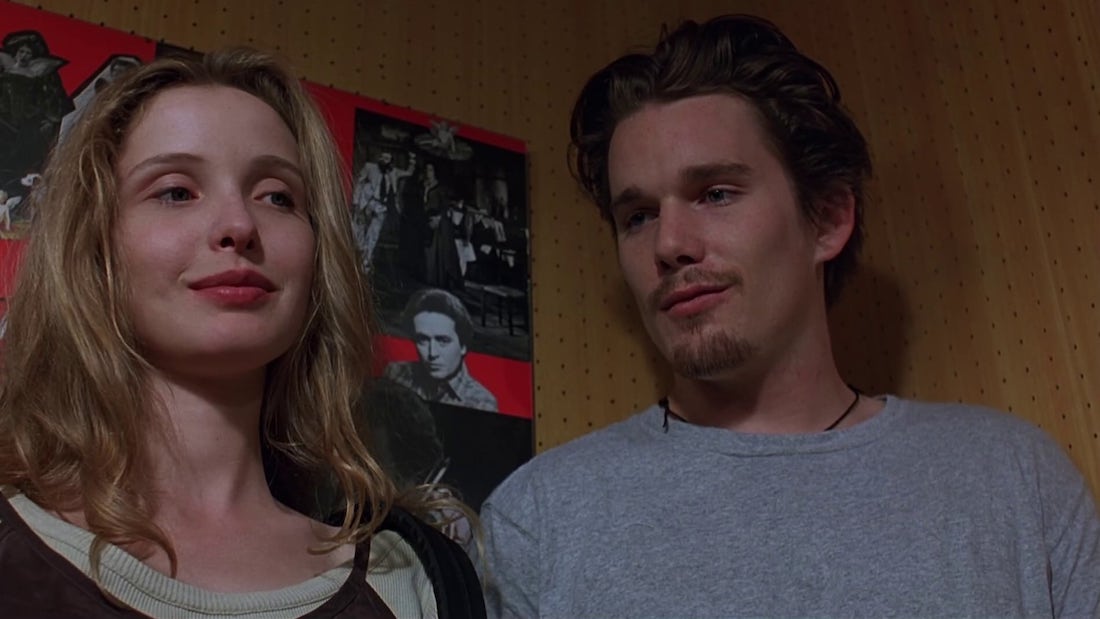 Watched now, Before Sunrise romanticises a time before the internet, social media, and dating apps. And despite being a somewhat hidden gem at the time of its release 25 years ago, it’s now regarded as one of the best romantic films; the sequels of which are also praiseworthy but don’t quite live up to the simpler magic of two strangers almost immediately falling in love over one dreamlike night.

Audiences at the time could be forgiven for scepticism toward this film before its release. After all, Linklater’s two previous movies were the iconic stoner comedy Dazed and Confused (1993) and the observational comedy-drama Slacker (1990). However, it’s with this picture that Linklater began to establish his realist and humanistic filmmaking style, arguably peaking with Boyhood (2014).

Linklater’s inspiration for Before Sunrise came from a chance meeting he had with a woman in Philadelphia, whom he spent the entire night with, talking and wandering around. As the film’s largely just two characters talking it required huge amounts of dialogue, so he made the important decision to bring Kim Krizan on board (who had minor roles in Slacker and Dazed) to get a female perspective and ensure authentic dialogue. This decision paid off. Although there are a couple of minor instances of dialogue that feels overly ‘romantic’, for the most part, it feels perfectly natural and flows from scene to scene smoothly. 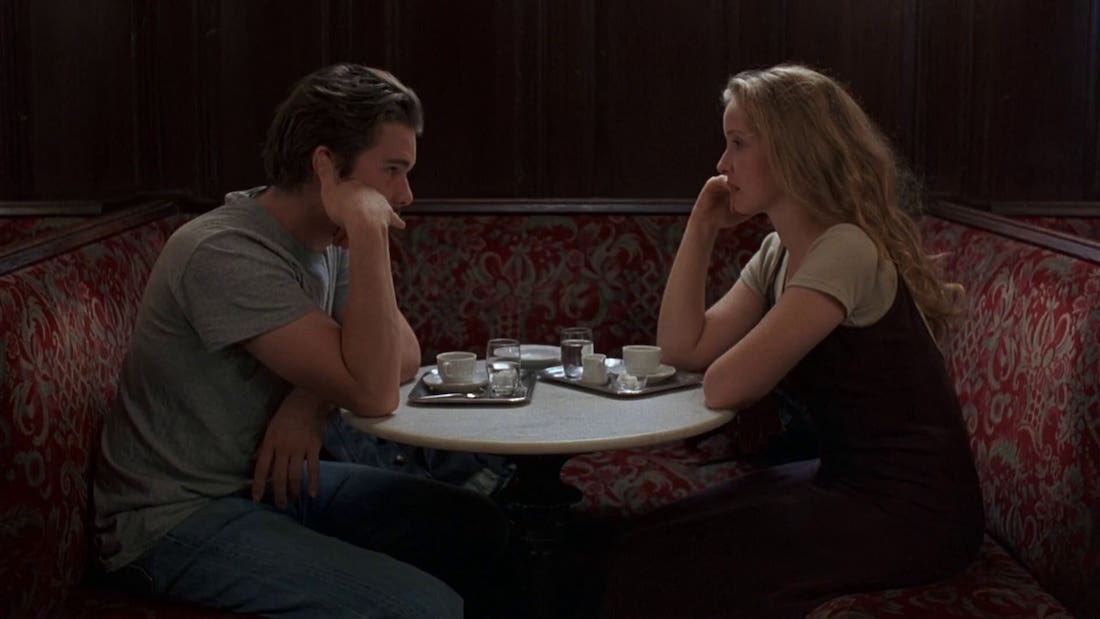 At first, the script’s location and characters were vague, but Linklater decided on a foreign city because people tend to be more adventurous and open when they’re travelling. He and Krizan finished writing it in 11 days, but casting the two main roles took as long as nine months.

Eventually, after an extensive casting process, Hawke and Delpy were chosen to play the lovers. Despite not being given any writing credits, the acting duo were heavily involved in redrafting the script. In fact, scenes were still being written once the film had begun shooting, which is when Delpy came up with the iconic scene where Jesse and Céline make pretend phone calls with their hands to a friend back home, describing how in love they are with who they’ve met. This collaborative writing effort between the actors and director continued into the sequels, where Hawke and Delpy became credited co-writers. 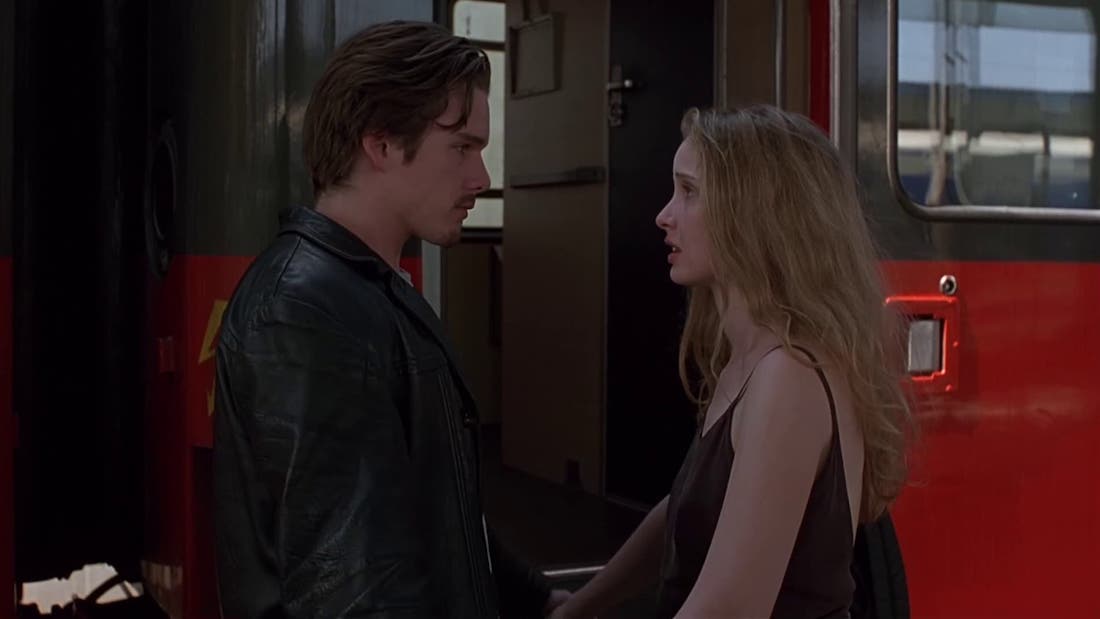 Despite Linklater’s two previous movies being wildly different, there are some similarities which shine through: like Slacker, Before Sunrise takes place over the course of a specific time period. However, this has different bearings on the respective films. With Slacker, it allowed us to follow the conversations of a wildly varied selection of Austin’s oddball residents who discuss everything from politics and terrorism to the brainwashing mass media and Madonna’s pap smear. With Before Sunrise, it acts as more of a deadline on the couples’ time together, driving home the idea of personal growth and fulfilment through falling in love and detaching one’s self from the real world.

Additionally, much like Slacker and Dazed, Before Sunrise introduces us to a number of secondary quirky and memorable characters. Not long after leaving the station, Jesse and Céline meet a couple of locals who invite them to a play (which they never see) about the search for a cow. They also meet a homeless man who writes them a poem and a fortune teller, both of whom have profound things to say, both about our two central characters as well as more philosophical musings on love and life.

And that may well be one of the things that mean Before Sunrise stands out as a romantic drama: its thought-provoking musings on the big questions about ‘life’. The conversations Céline and Jesse have often revolve around their previous experiences and what they mean to them, which often brings up their thoughts on everything from religion and death to dealing with pain and, most importantly, how our experiences shape who we are. Thus, Before Sunrise is about so much more than two people who fall in love; it deals with a number of deeply philosophical questions—something synonymous with some of Linklater’s other pictures such as Slacker and A Scanner Darkly (2006). 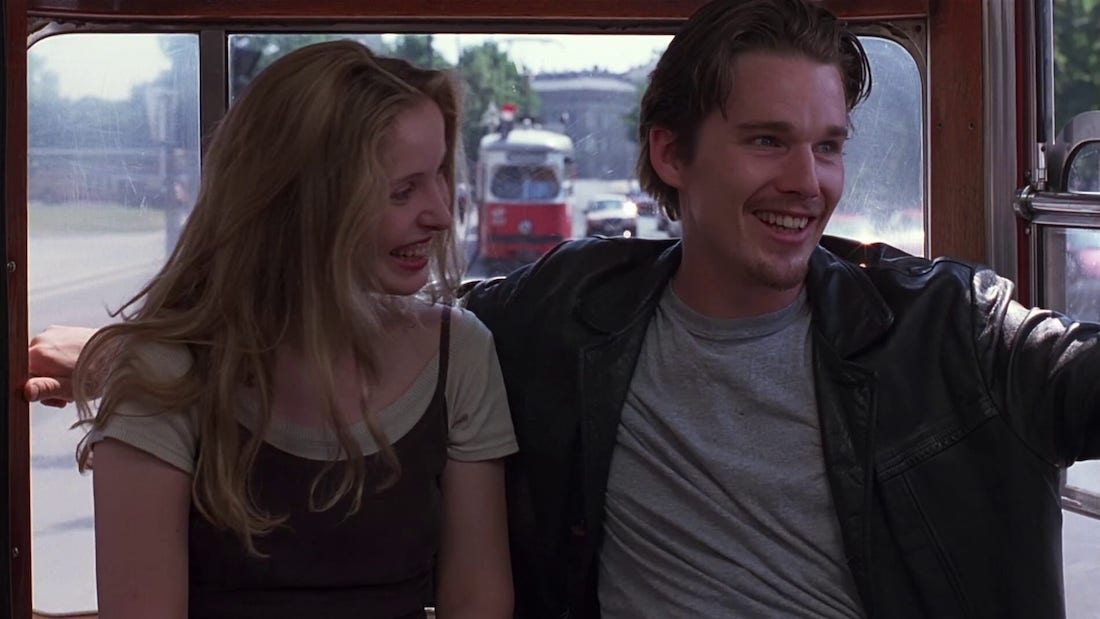 Despite all the dialogue, one of the most touching scenes is when there’s none at all. Whilst shopping in a record store, the duo step into a booth and listen to “Come Here” by Kath Bloom without exchanging a single word. They glance at each other, sometimes catching each other’s eye, sometimes as the other looks away. There’s a longing in each of their faces which captures the effects of two people falling in love.

Similarly, once the two have said their goodbyes, we’re left with various shots of the different places in Vienna they visited, only this time with the sun rising as the city awakens. No dialogue, no characters, just images of places like reminiscing a memory.

Now, 25 years after its release, Before Sunrise is without a doubt not just one of the most iconic romantic dramas, but a watershed moment and defining picture in Richard Linklater’s career. A timeless piece of cinema which modern audiences will find beckons to an era before the walls of social media began to separate us. 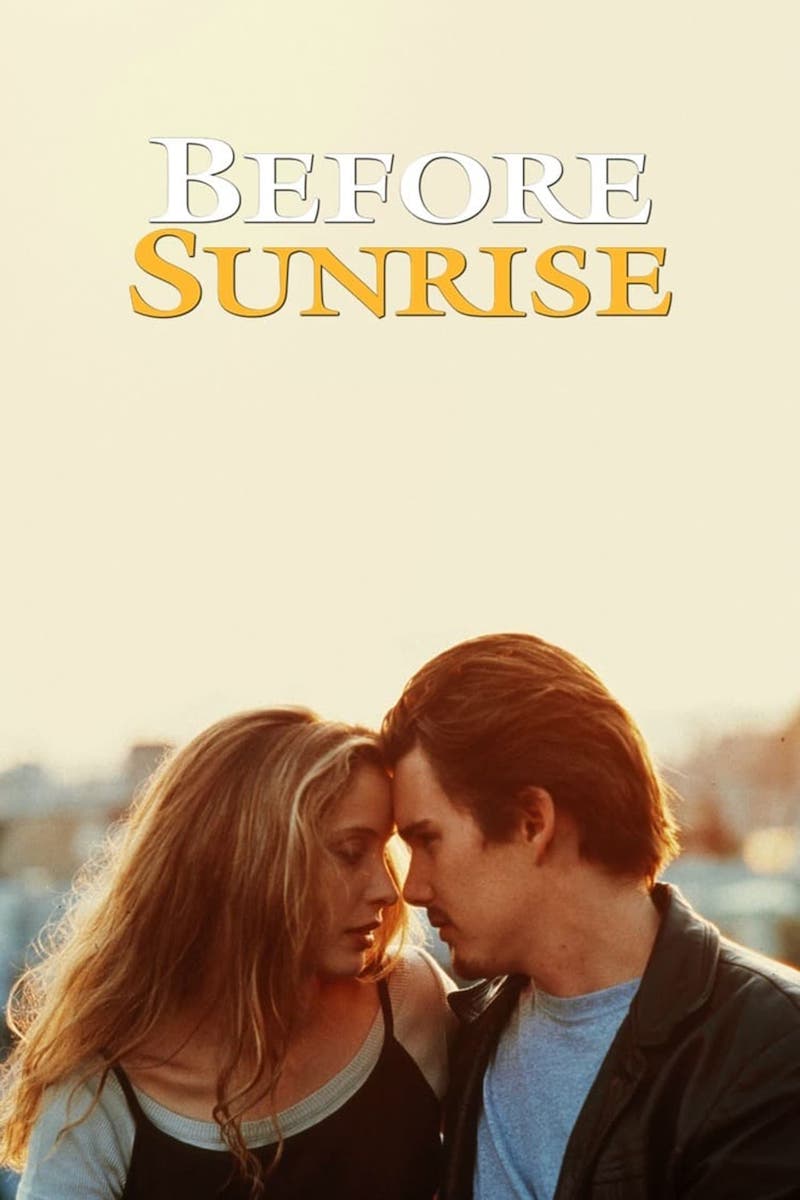