Shadow Moon (Ricky Whittle) is not having a good week. After narrowly surviving a lynching at the end of the first episode of American Gods, he now finds himself losing a high-stakes game of checkers and facing the prospect of a gruesome death at the conclusion of the second. He’s gone from hearing the shocking news of his wife’s demise to being sucked into a world of unexplained craziness, and it’s all happened in the space of a few days.

That’s before even considering the revelations about his wife’s infidelity, his bar fight with Mad Sweeney, and his introduction to both the bizarre Technical Boy and a reincarnated Lucille Ball (Gillian Anderson), who appears to him through various supermarket TV screens. Perhaps any other person wouldn’t be able to deal with all of this, but Shadow isn’t an average man. Still, Ricky Whittle is doing an excellent job of conveying just how disorienting and difficult this all is him to process. While he’s yet to have an outsized reaction to everything that’s going on, it seems the show’s making it clear he’s either hoping he might’ve gone mad or that, if he holds it together long enough, everything may reveal itself to be some kind of horrifying dream. 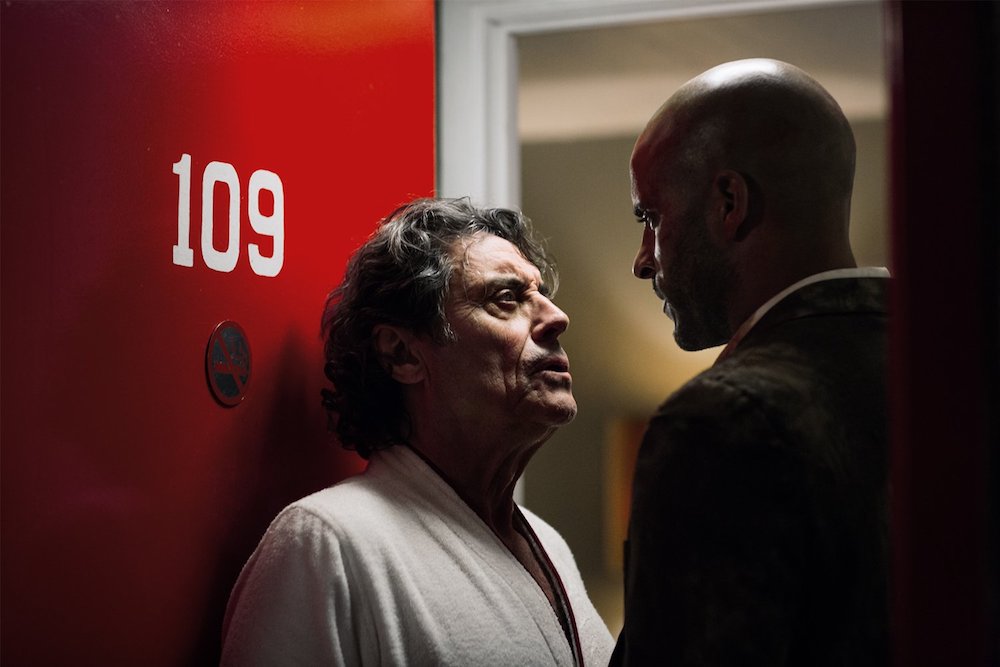 At the moment, American Gods is walking a delicate tightrope. The balance it’s aiming for is a difficult one to pull off, and it could easily slip and fall into preposterous pretentiousness if it’s not too careful. It’s easy to picture how this show could struggle to support its larger-than-life characters, and how Shadow’s reticence could eventually make him too much of a passive protagonist. The main character can only be left this much in the dark for so long, and the Gods on display will need to have more recognisably human traits to work as characters to root for or against. Thankfully, Shadow’s actions towards the end of this hour demonstrated how he can have a role in pushing the story forward, and a character like Czernobog (Peter Stormare) shows how a deity can also be more human; in this case full of regret, anger, and cruelty.

In “The Secret of Spoons”, Shadow and Mr. Wednesday (Ian McShane) hit the road, and we got more of a feel for how each instalment of this show is going to look and behave. Everything kicks off with another “coming to America”, vignette just like the Viking violence in the premiere. This time, though, it’s set aboard a 17th-century Dutch slave ship and shows the arrival of African spider god Anansi (Orlando Jones). It’s great to see American Gods being more  forthcoming about the real identities of the Gods this week. 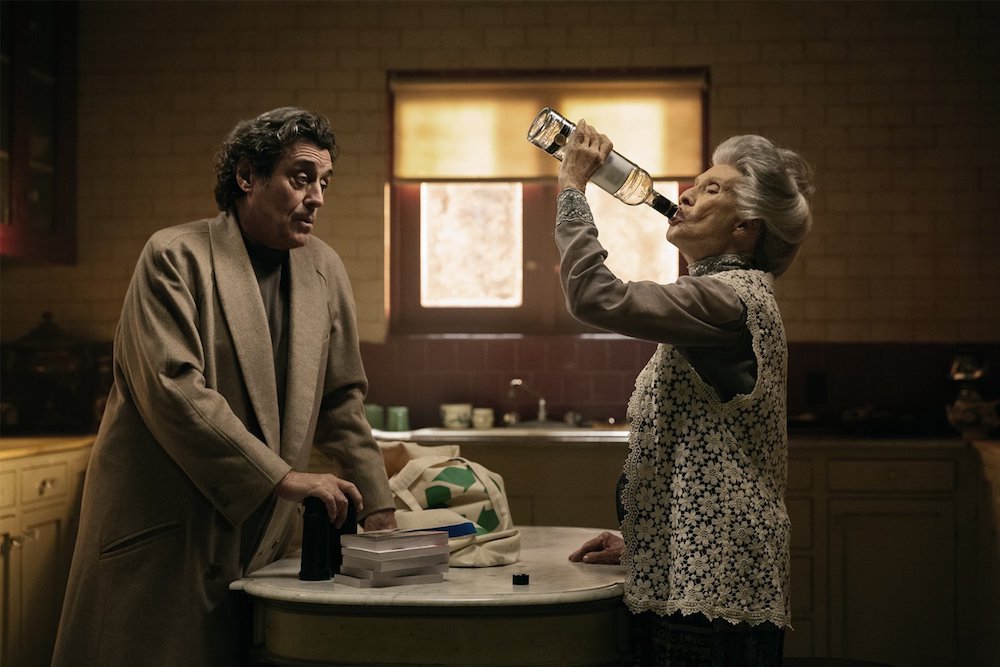 The premiere made it fairly evident that Wednesday is Odin, and while he’s still opaque he’s beginning to fill Shadow in on his plan. The more futuristic gods like the Technical Boy and Media’s (Gillian Anderson) brief appearance on TV screens are Wednesday’s contemporary enemies, and he’s amassing the Old Gods for a coming conflict. This is why he and Shadow end up in the home of the Slavic god of evil Czernobog and his relatives, the three Zorya sisters — Zorya Vechernayaya (Cloris Leachman), Zorya Utrennyaya (Martha Kelly), and their unseen third sibling.

Dinner with Czernobog is a tense affair, as befits a God who seems to revel in ushering in death and destruction. In the end he challenges Shadow to a simple game of checkers, eventually making things more interesting by putting a wager on it. If Shadow wins, Czernobog will agree to join Wednesday’s team. But, should he lose, Czernobog gets to smash Shadow’s skull in with a sledgehammer, because he just loves killing that much. It’s a pretty risky bet, and speaks to Shadow’s disorientation that he ends up going along with it simply because he feels like he’s got nothing to lose if the world’s as crazy as it’s beginning to seem. Unfortunately, the game doesn’t go his way. Like the premiere, this show knows how to keep viewers hooked, leaving the resolution of this plot dangling as poor Shadow’s left with just a few hours until sunrise to somehow avoid getting the hammer. 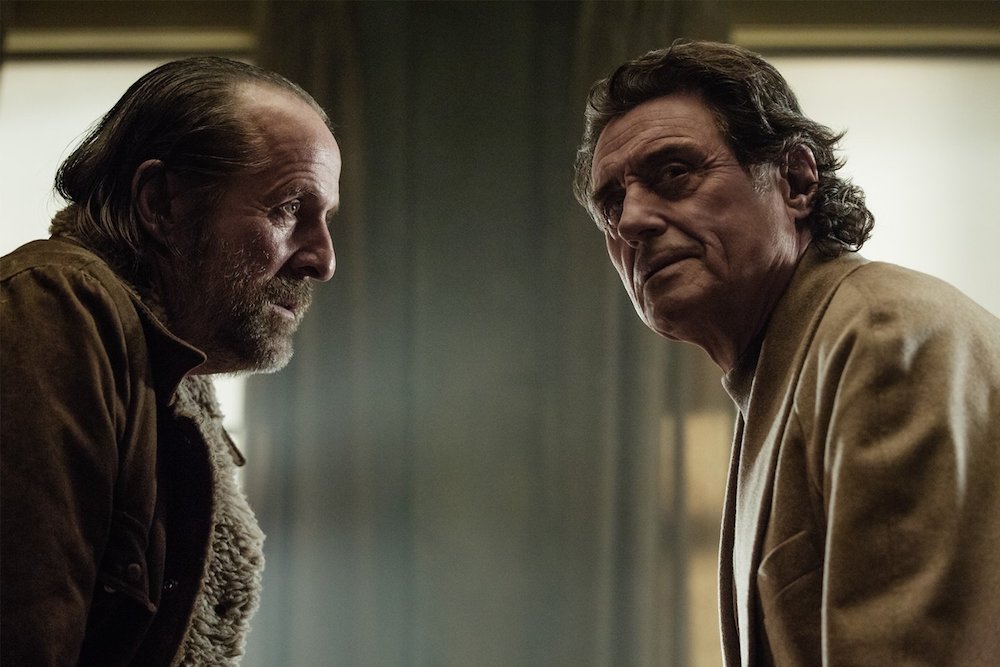 In all the ways that matter, “The Secret of Spoons” is a less confusing hour than the first episode. It’s still incredibly strange, of course, but it feels a bit more comprehensible. We’ve been eased into the world of American Gods and it’s interesting to see how everything is starting to fit together. But it still feels like you need a companion handbook on ancient mythology just to know who all the characters are, unfortunately, and the jarring scenes of Bilquis absorbing lovers are no less weird or any more comprehensible than they were first time around.

Questions about whether the show is going to be able to stand on its own as a narrative, for those less interested in the mythological minutiae, are still worth asking. It’s gorgeous and compelling right now, but there’s a chance American Gods could become too unwieldy, too inaccessible, and too lacking in coherence because it prioritises visual splendour above all else. But at this early point, it’s safe to say there’s enough substance to balance out the style, and the actors are so strong that it’s easy to get drawn into characters who actually haven’t done a great deal yet.