It’s an exciting time for anime and manga fans. Once regarded as a niche market, those Japanese art forms are now receiving a flurry of big-budget Hollywood adaptations. Rupert Sanders’ Ghost in the Shell (2017) proved there was a market for them, grossing almost $170M at the box office, and now we have Alita: Battle Angel from producer James Cameron (Avatar) and director Robert Rodriguez (Sin City).

The 1990 Japanese manga Gunnm by Yukito Kishiro was courted for Hollywood adaptation in the late-1990s when Guillermo Del Toro (Crimson Peak) was interested in tackling the project. However, after getting sucked into development hell for many years, Cameron announced plans to adapt Alita back in 2003, before the success of Avatar (2009) took him down a different path. 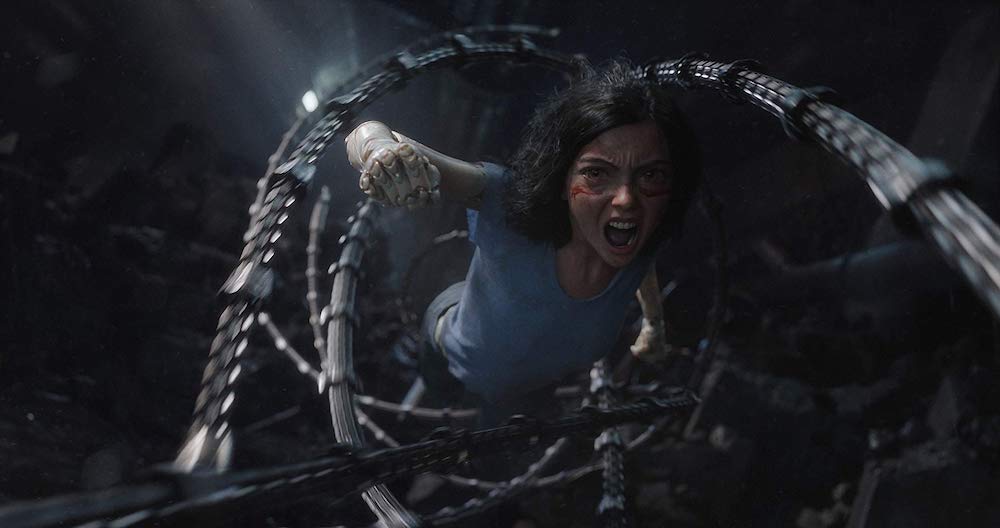 The movie then floated around in limbo for years until a suitable director was available to bring it to life: Robert Rodriguez. He was given Cameron’s script in 2015, co-written with Avatar‘s Laeta Kalogridis. Handed a massive $200M budget by 20th Century Fox, and the support of Peter Jackson’s VFX team behind The Lord of the Rings (2002), the kick-ass cyberpunk adventure finally arrives with the intention of replicating the success of recent Young Adult movies like The Hunger Games (2012).

Taking place in the year 2563, there have evolved two different societies: those who live in the floating paradise known as Zalem, and those who long to be there. The ramshackle metropolis known as Iron City resides below Zalem, where cyber-surgeon Dr Ito (Christoph Waltz) finds the remains of a cyborg called Alita (Rosa Salazar) in a junkyard. After successfully bringing her back to life, it’s revealed the beautifully sweet-natured teenager is suffering amnesia, but a series of flashbacks enable her to slowly piece together the life she once had as terrifying ‘Hunter-Warrior’. Now recalling her secret past, Alita has her way into Zalem by competing in the ultra-violent sport of Motorball, where she impresses CEO Vector (Mahershala Ali). 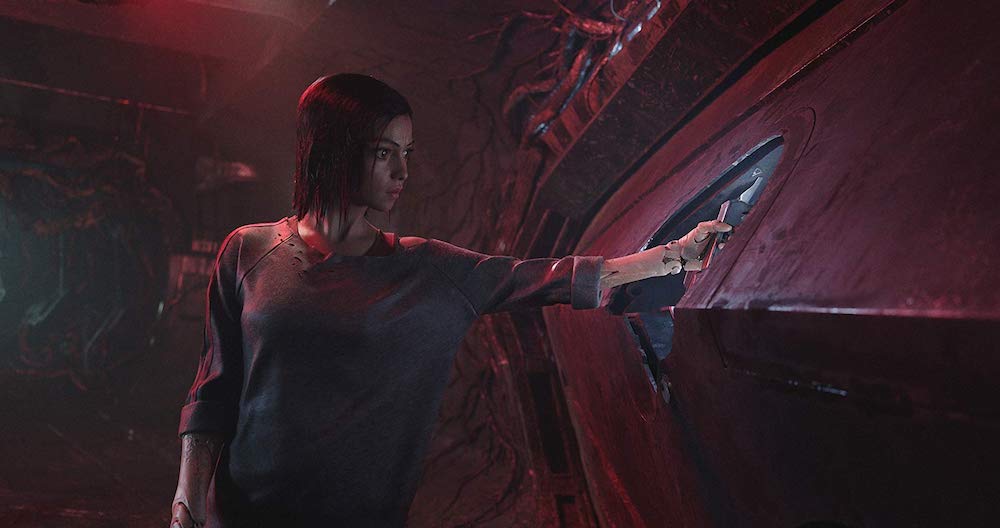 Alita is played by Rosa Salazar (Bird Box) beneath a performance-capture effect that looks like a Snapchat filter. Her large manga-inspired eyes ruffled feathers before the film’s release, but one quickly becomes accustomed to them. Cameron apparently requested the animators enlarge her irises to lessen the ‘uncanny valley’ response audiences had to the first trailer. Alita’s big eyes are windows to her soul, but also a subtle yet constant reminder she’s not human. Salazar characterises Alita with warmth as someone discovering a magical world for the first time. She’s easy to love thanks to her innocent, childish gasps after being introduced to the bustling city. Salazar’s performance is just as impressive as Andy Serkis’s was in Rise of the Planet of the Apes (2011), but each of Salazar’s emotional lines gets lost thanks to Alita’s blank expression not correctly captured by the VFX artists.

Christoph Waltz (Spectre) does a magnificent job portraying a paternal relationship as Dyson Ido. The kind-hearted cyber-surgeon reminds the audience where the heart of the story truly lies. His arc mirrors traces of Mary Shelley’s Frankenstein set against a dystopian backdrop, giving the audience a welcome break away from the action. His parental skills do become confusing during several key scenes, however; one moment he’s a protective father, the next he’s sending Alita into dangerous battle. But whenever Ido and Alita are together their chemistry feels authentic and nicely echoes Carlo Collodi’s Pinnochio. The sappy romance with love interest Hugo (Keean Johnson) sadly isn’t as believable, while Johnson (Nashville) has dashing good looks but his soppy lines are dreary and he lacks chemistry with Salazar. And it’s essential for the finale we feel a connection between so, unfortunately, it feels tacked on as an afterthought. 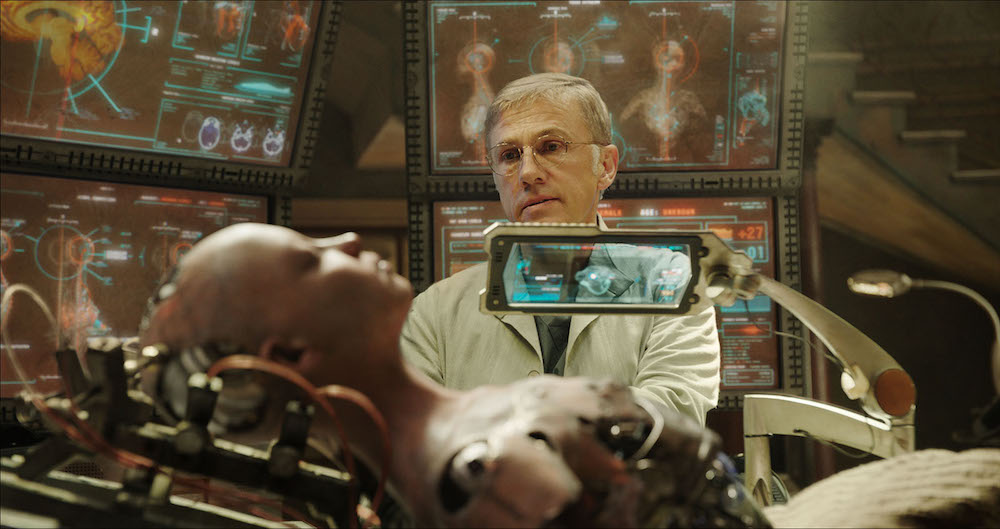 Recently nominated for an Academy Award for Green Book (2018), Mahershala Ali’s Vector is pulling the strings from above in the city of Zalem. Hidden in the background behind his large sunglasses, Vector is more a presence than a legitimate threat. This sophisticated villain compels in a role analogous to the Emperor in Star Wars: The Empire Strikes Back (1980), and he’s a reminder to Alita that there’s always a more powerful foe to challenge. Jennifer Connelly (Labyrinth) looks gorgeous as Chiren, a former resident of Zalem who succumbed to an unfortunate incident that resulted in her leaving the city, but as unique as her character is, she drifts from scene to scene waiting to be utilised properly.

Rodriguez has already proven himself a fast-paced, kinetic filmmaker. The shoestring budget El Mariachi (1992) gave Hong Kong-era John Woo a run for his money. It’s difficult to detect the director’s signature grindhouse style in Alita: Battle Angel, due to the grand scale of a 20th Century Fox production. However, once Alita’s challenged by a room full of weaponised robots to a massive brawl, Rodriguez reinterprets the bar room brawl from Desperado (1997) but with colourful robots. The subtle winks to his earlier work and the architectural nods to Latin America are treats for his older fans and serve as a reminder of his personal touch. Cameron’s artistic nuances also float around the film, as we see scrapheaps of robot body parts that could easily be Bishop’s from Aliens (1986). 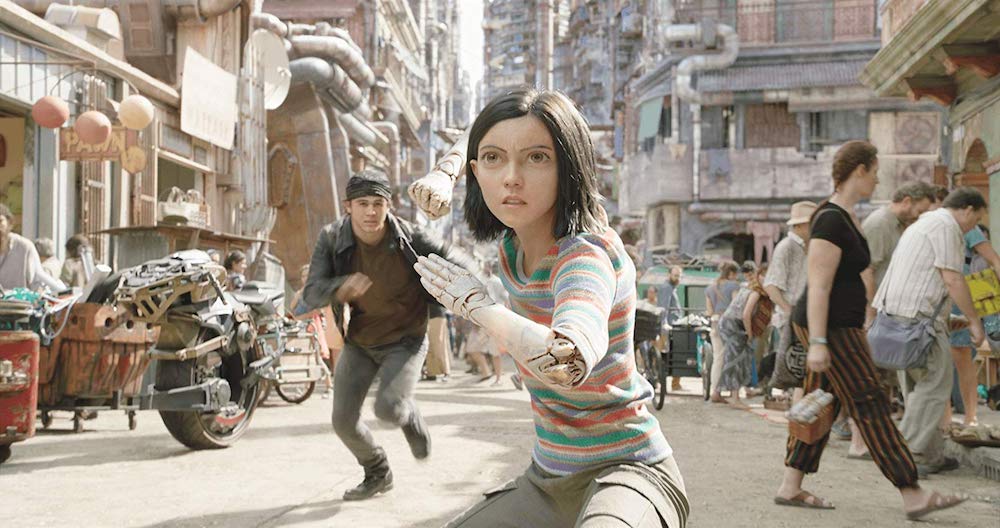 Alita’s fight sequences are dramatically staged and fluidly captured by Rodriguez and The Matrix (1999) cinematographer Bill Pope. The camerawork most comes to life during Alita’s fight against gigantic Grewishka (Jackie Earl Haley) and every Motorball sequence. The hyper-violent sport is a cross between gladiatorial combat and speed skating, where the goal is to carry a heavy motor ball across the finish line or be the last player standing. Juxtaposed with the steampunk backdrop of Iron City it’s a heavy metal orgy of digital effects. Personally, I’m not a fan of 3D presentations at the cinema, however, the set pieces are certainly an impressive spectacle. WETA Digital provide a sensory overload of warm colours and beautifully detailed cityscape, as Iron City could be in the same neighbourhood as Blade Runner 2049 (2017).

Unlike the manga, Motorball becomes central to the narrative and Alita’s own character. The sport is used to connect all the main characters story arcs, thus becoming the most thrilling element of the movie. In a similar vein to Rollerball (1975), the Motorball sequences are some of the best-animated sporting moments since Speed Racer (2008), albeit a lot darker and far more dangerous. Unfortunately, the extravagant cartoon violence of the extreme sport dominates the screen leaving a narrative lacking the charisma of Rodriguez’s Sin City (2005), and with this lack of depth the movie quickly becomes style over substance—rather like Spy Kids 3D: Game Over (2003), which may even explain its tame 12A rating from the BBFC.

Still, Rodriguez directs the action with enough grace that the film works as an exciting popcorn flick. The VFX is so intricate you can see every pour on Alita, and the action sequences are so intense they’ll make audiences feel like they’ve competed in a real game of Motorball. Time and patience have been put into adapting the source material for the big screen, visually, but the script piles up the manga’s highlights with little explanation… leaving us with plenty of dangling ends.