If you like Gothic romance (rites of passage tales where an innocent girl falls in love with a brooding hero, drawn into the secrets of his old dark house), you’ll enjoy this sumptuous film where the ghosts “are real”. Guillermo del Toro is a master of this genre and, in Crimson Peak, he creates an elaborate adult fairy tale which echoes folk stories such as Bluebeard and Beauty and the Beast. Del Toro has described Crimson Peak as his most beautiful film so far, returning to the territory of The Devil’s Backbone (2001) and Pan’s Labyrinth (2006) after concentrating on big-budget Hollywood movies like Hellboy (2008) and Pacific Rim (2013).

Set in 1901, Crimson Peak follows the journey of Edith Cushing (Mia Wasikowska), a bright young American who dreams of becoming an author. As a child she was visited by her mother’s ghost, who warned her to “beware of Crimson Peak”, and in adulthood is seduced by the charm of handsome English baronet Thomas Sharpe (Tom Hiddleston), who seeks funding from her father, Carter Cushing (Jim Beaver), for his inventions. Carter is suspicious of Thomas and his sophisticated yet restrained sister Lucille (Jessica Chastain), and when his doubts appear confirmed he seeks to end their relationship. However, following Carter’s brutal death, Edith draws comfort from Thomas as they fall further in love and marry, whereupon Edith is taken to Allerdale Hall and uncovers the many dark secrets that haunt this semi-derelict mansion. In the process, she discovers her own strength and the true meaning of love, and begins writing a story called ‘Crimson Peak’… 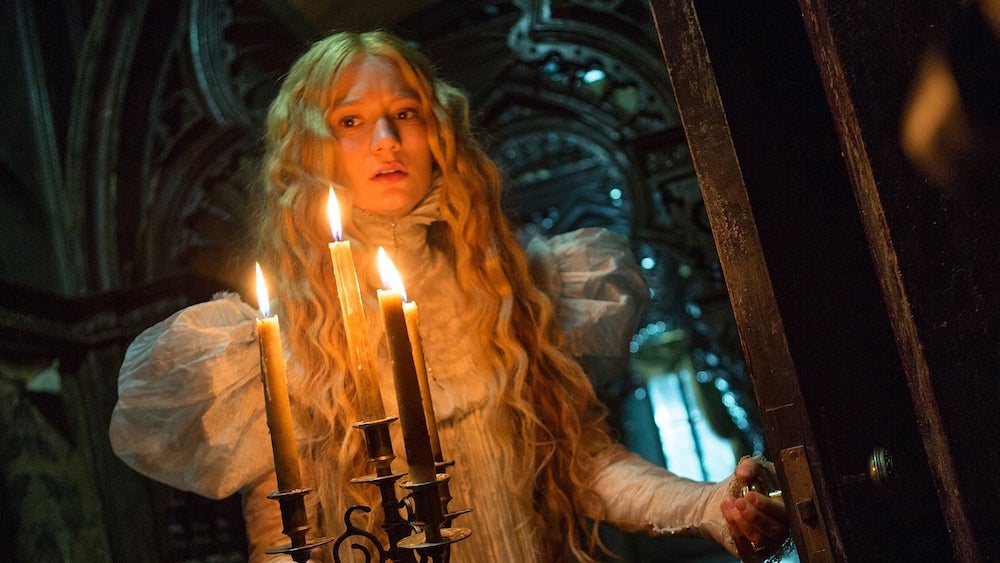 Del Toro draws upon the rich literary legacy of the Gothic genre, from Walpole’s original story The Castle of Otranto (1764) through to Charlotte Bronte’s Jane Eyre (1847)—where the heroine was forbidden to enter an attic she hears spooky sounds emanating from—to Daphne du Maurier’s Rebecca (1938), where a newlywed is oppressed by a sinister housekeeper. The film has a painterly feel and exhibits artistic influences such as Caspar David Friedrich’s famous 1818 work “Wanderer above a Sea of Fog” (compare that with a shot of Hiddleston standing in the doorway of Allerdale Hall looking out at a blizzard).

Of course, it also homages many classic films, such as The Uninvited (1944), which involved ghosts trying to influence the fate of a young girl; Hitchcock’s Notorious (1946); Roger Corman’s Poe films with their vivid use of colour, particularly The Fall of the House of Usher (1960); The Innocents (1961) which was based on a ghost story by Henry James; Kill Baby Kill (1966); The Shining (1980) where snow cuts off the haunted hotel; and Bram Stoker’s Dracula (1992). There’s particular resonance with Francis Ford Coppola’s Dracula adaptation, which is also a beautiful vision of colour, costume, and set designs intended to conjure an adult fairy tale. Its use of set-pieces to give tempo to each portion of the film is also similar (like turning the pages of a familiar storybook), and also the use of silent film techniques such as the iris shot (narrowing down to a blackout), as well as stunning sets, costumes, and the beautiful arthouse production.

Crimson Peak is a sensuous modern take on Gothic romance—the plot is faithful to the genre and yet subverts it in ways that’ll delight fans. Jim Beaver, Charlie Hunnam (as Edith’s childhood friend Dr Alan McMichael), and Hiddleston give fine sensitive performances as the drama plays out, but at its heart are the two strong female characters: Edith, the delicate yet resilient butterfly; and Lucille, the dark powerful moth. 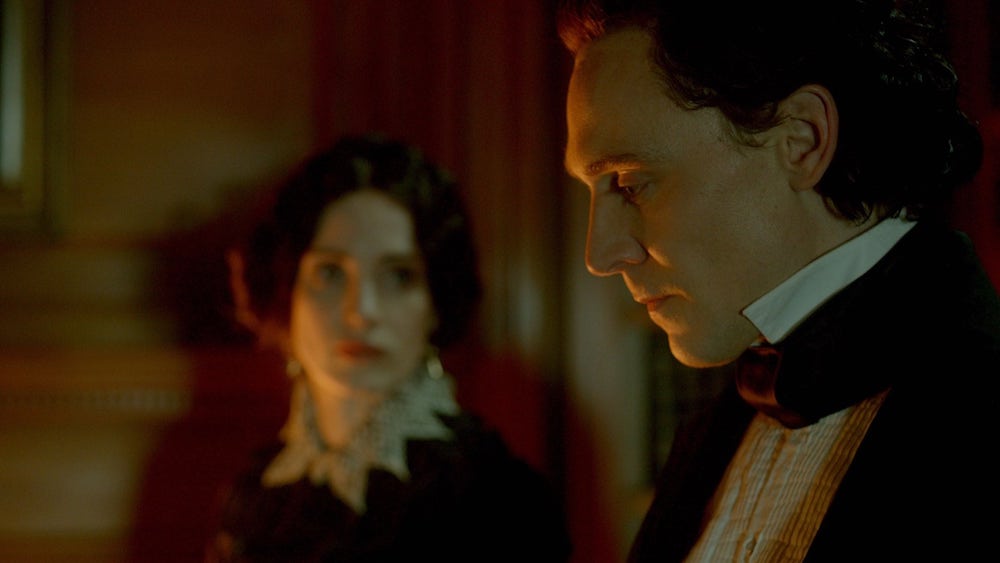 The film is one to rewatch on so many levels. The mutual attraction of Edith and Thomas is so romantic, and the interplay between Edith and Lucille incredibly gripping. Without the darkness of evils past, things could’ve been so different. If Edith is drawn to Thomas and his mystery, he’s drawn to her light. As del Toro says, the true threat is not from ghosts but from what the living humans are capable of.

At Crimson Peak’s core is a personal vision of ghosts, drawn from Mexican ‘Day of the Dead’ traditions and del Toro’s own family experiences (his mother was visited as a child by her grandmother’s ghost after the funeral). There are genuine chills and episodes of extreme violence in the tradition of Grand-Guignol or Italian filmmakers like Dario Argento. This equals the impact felt by Victorians reading Gothic romances in their gaslit parlours… it’s not postmodern but rather updated for contemporary audiences.

The film offers a rich dream of Victorian times to relish on a dark winter’s night. The colour palette of the first section is golds and tobaccos set in the city of Buffalo, burgeoning in commerce and progress (it was even the first US city to have electricity). The ballroom scene is beautiful, and the candle-lit dance is the epitome of gentle eroticism. In contrast, Allerdale Hall in Cumberland, England, has dark wood and teal tones to emphasise its age and, naturally, red is used to great effect as scarlet clay seeps through the floorboards and cracks of this rotting mansion. 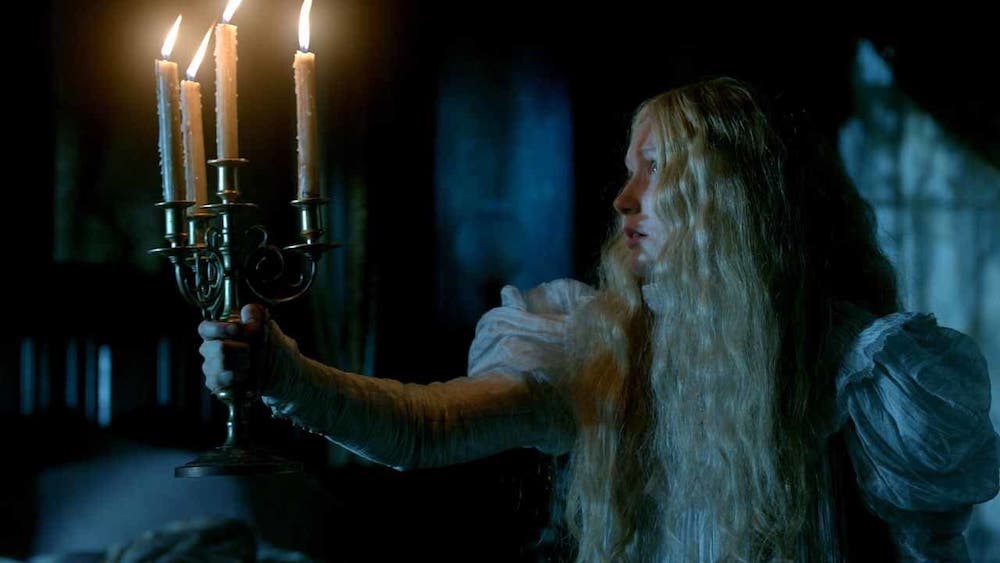 Del Toro keeps a bucket list of people he wants to work with and set designer Tom Sanders was on it. Sanders had worked on Bram Stoker’s Dracula (earning an Oscar nomination) and he clearly revelled in creating the haunted house set of Allerdale Hall for Crimson Peak. He worked on beautiful maquettes so that every shot, every foreshortened perspective, could be designed to best effect before the set was created in full size. The actors appreciated a real physical set, like those used in Hollywood’s heyday, to perform within. The scullery even had a working kitchen range! The corridors are shaped like the negative space of a human body to frame the actors and ghosts beautifully. This honours the idea that the House in a Gothic romance is a character in itself, and this is true of Allerdale Hall—its timbers are bones, rotting to expose clay as its oozing blood.

Del Toro says in this Blu-ray’s accompanying documentary “The House is Alive” that he wanted to “build the costumes and couture the sets” and the work of costume designer Kate Hawley (The Hobbit) reflects this. Edith has a wide butterfly silhouette in her many bright beautiful costumes (which also echoes a canary in a cage), while Lucille is tightly sheathed in rich velvets with hand embroidered oak and needle motifs that merge with the décor of the house itself. Incidentally, the brooch Lucille wears at her throat was a real heirloom which belonged to del Toro’s grandmother.

A butterfly motif also runs throughout the sets—on wallpaper, in Lucille’s collection, even in the shape of a chair. As Edith is more threatened by events and discovers more horrors, she seems to dwindle in stature like Alice down the rabbit hole – and indeed the butterfly chair and teacup was made in a size 30% larger to emphasise this effect! Del Toro even went so far as to secretly write the word “fear” in places around the set to add to the actors’ sense of unconscious foreboding. Jessica Chastain admits she was relieved to leave the set! 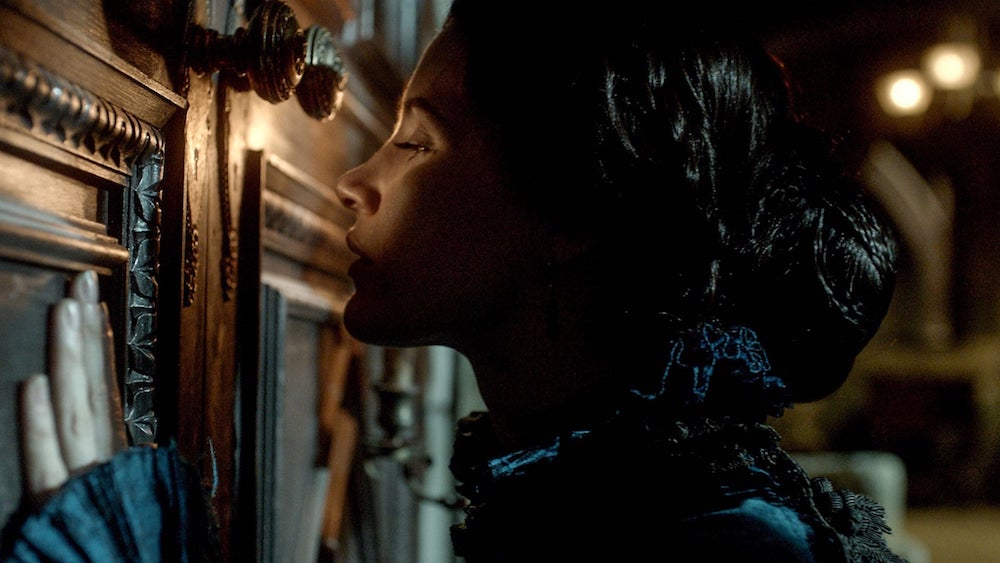 Trap doors were made so the ghosts could physically crawl out into corridors. Real actors, overlaid with digitised special effects, were used so Edith had a physical presence to react to. Xavi Bastida was head of make-up, having worked with del Toro on Pan’s Labyrinth, and the ghosts take on the colour of crimson clay, with their limbs and faces contorted like those of mummified bodies found in peat bogs.

The primary actors were given a 10-page biography of their characters before filming with del Toro, and the depth of their performances can be further appreciated on a re-watch. Del Toro wanted us to understand even the villains of the story; how they’re trapped by the past and the secrets of the house. The cast had good ‘Goth’ pedigree: Mia Wasikowska had already played Tim Burton’s Alice in Wonderland (2010) and Jane Eyre (2011); Jessica Chastain had played Salome (2014); while Tom Hiddleston had played Shakespeare’s Prince Hal in the BBC TV series The Hollow Crown (2012). Also, Hiddleston and Wasikowska had previously acted together in Jim Jarmusch’s Only Lovers Left Alive (2013).

Crimson Peak was not a runaway box office success in 2015, as it grossed a total of $74.7M against a budget of $55M. However, it was well received critically and earned praise from the great horror author Stephen King himself. It’s a classic Gothic romance for fans of the genre to treasure. This new Arrow Video Limited Edition Blu-ray release provides a stunning clarity to its colourful beauty and contains many great extras listed below.