In his 2002 review of Solaris (1972), Roger Ebert distinguished between it and 2001: A Space Odyssey (1968)—which it was accused of ripping off at the time—suggesting Stanley Kubrick’s film looked outward at humankind’s place in the universe, while Andrei Tarkovsky’s looked inward at what makes us human. All space dramas, from Forbidden Planet (1956) to Gravity (2013), can be divided roughly along these lines of external and internal exploration. The speculative vs. the personal.

David Gray’s sci-fi epic Ad Astra takes the Solaris route, using the vastness of outer space as a framing device for a deceptively simple story about a fraught father-son relationship. Meditative and introspective, it’s the most understated blockbuster of 2019 and a visionary, if sometimes derivative, journey into an interstellar heart of darkness. 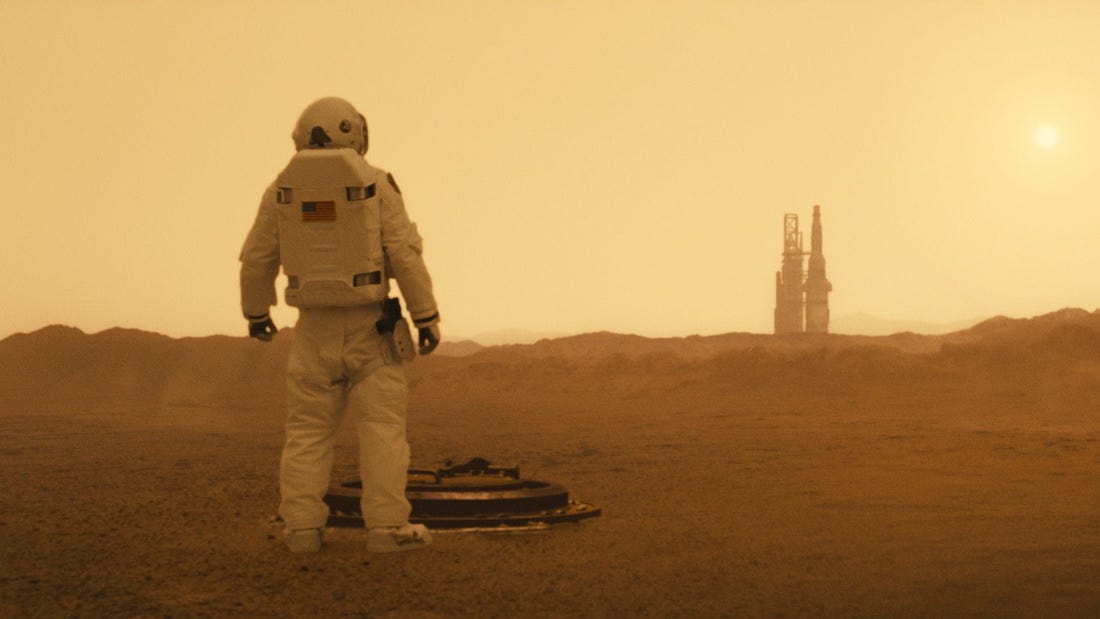 We’re introduced to astronaut Roy McBride (Brad Pitt) on a space antenna about to explode due to a sudden and unexpected power surge. And explode it does, but McBride stays almost unreasonably calm during the disaster, even during his inevitable freefall towards Earth. Months later, when called into a meeting to talk about a new assignment, McBride’s superiors inform him that at no point during the antenna crisis did his heart rate exceed 80 bpm. In other words, he had the pulse rate of someone on a brisk walk while he was tumbling through the planet’s atmosphere.

McBride’s ability to remain composed under stress is rewarded with SpaceCom’s most dangerous mission yet: to reconnect with his absent father, legendary astronaut H. Clifford McBride (Tommy Lee Jones), who was heading a pivotal space exploration mission decades ago that lost contact with Earth upon approaching Neptune. Roy’s bosses believe a recent wave of dangerous power surges—which they attribute, in a speech that may or may not hold water under scientific scrutiny, to cosmic rays—can be traced back to Clifford’s AWOL spaceship. And they need Roy to travel across the solar system in order to track it down. Roy agrees to help, partly because the fate of humanity depends on it (those cosmic rays bode extremely poorly for the inhabitants of Earth), but mostly because his dad’s been assumed dead for 16 years and this is his first and only chance at reconciliation. 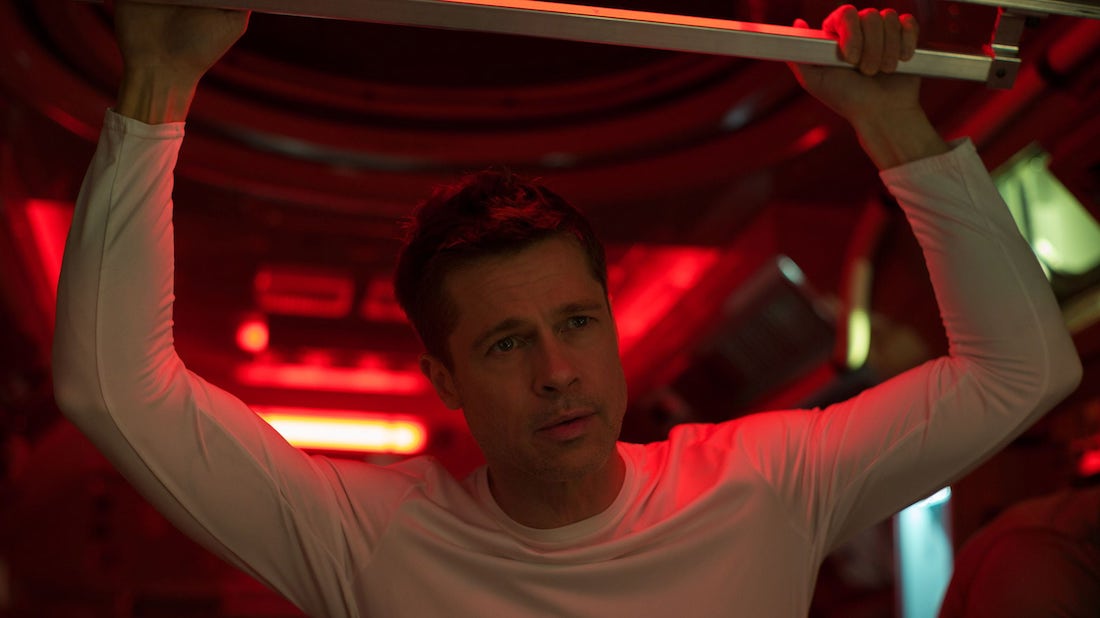 For a story this big (and we’re talking one-man-traversing-the-entire-solar-system big), Ad Astra is deeply claustrophobic from the first shot to its last. Rather than tell the story through an omniscient POV, director Gray filters the entire story through McBride himself. This is a movie that takes place largely in his character’s head, never leaving his perspective and prominently featuring a Terence Malick-style internal monologue to guide us through his emotional journey.

This kind of intense focus requires a charismatic lead performance and Brad Pitt certainly delivers. It’s been a spectacular comeback year for him, as his performance in Once Upon a Time… in Hollywood (2019) was one of the highlights of Tarantino’s latest, and here he gives another memorable turn.

Other familiar faces appear, too: Natasha Lyonne (Russian Doll) and Liv Tyler (Armageddon) get notable cameos, while Ruth Negga (Preacher), Donald Sutherland (Don’t Look Now), and Tommy Lee Jones (Natural Born Killers) drift in and out of the story in fairly significant roles. All are fantastic to be sure—Jones hasn’t given a performance this quietly devastating since No Country for Old Men (2007)—but none are quite on par with what Pitt achieves. In his hands, Roy McBride becomes a heartbreakingly tragic man. His character has a definite Shakespearean slant, stopping at absolutely nothing and nearly sacrificing everything in a determined quest to reunite with his father and get some answers. It’s stunning work that signals a second career renaissance for Pitt after a slow four years. 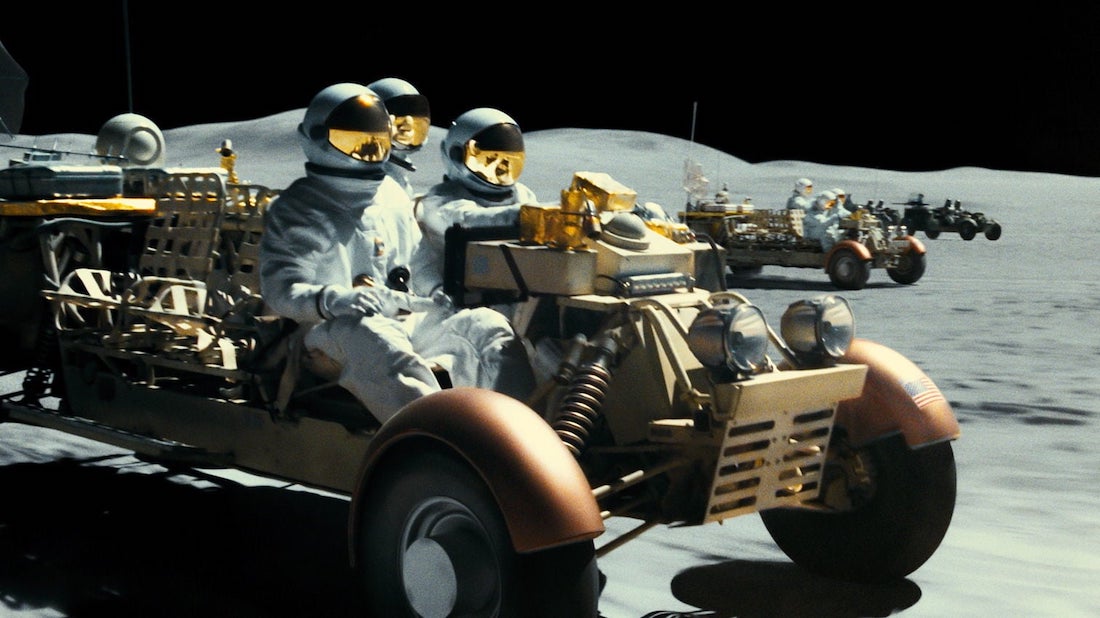 As much as I’m eager to heap lazy descriptors like “visionary”, “brilliant”, and “like-nothing-else-you’ll-see-this-year” onto Ad Astra, similarities to other artistic blockbusters are to be expected. The film only feels fresh insofar as how well it blends all of its influences into such one cohesive package, but there are certainly a lot of influences in its DNA. Apocalypse Now (1979) comparisons are particularly appropriate, as the plot structure is virtually identical, with Brad Pitt subbing for Martin Sheen and Tommy Lee Jones for Marlon Brando. The parallels are so extreme at certain points it’s genuinely a surprise Joseph Conrad wasn’t given a writing credit in this film, as it’s essentially Heart of Darkness in space.

Interstellar (2014) is another movie it’s hard not to think about while watching Ad Astra. Whereas Christopher Nolan’s grandiose vision was more impressive than his convoluted and sometimes sloppy execution, James Gray never oversteps his bounds. Interstellar was a personal story with an impersonal touch, but the similarly monumental scope of Ad Astra is genuinely in service of a smaller and more straightforward human story. This is a movie about the bond between a son and his father he feels left him behind, and all the sci-fi spectacle that surrounds that core narrative is ultimately only a backdrop. 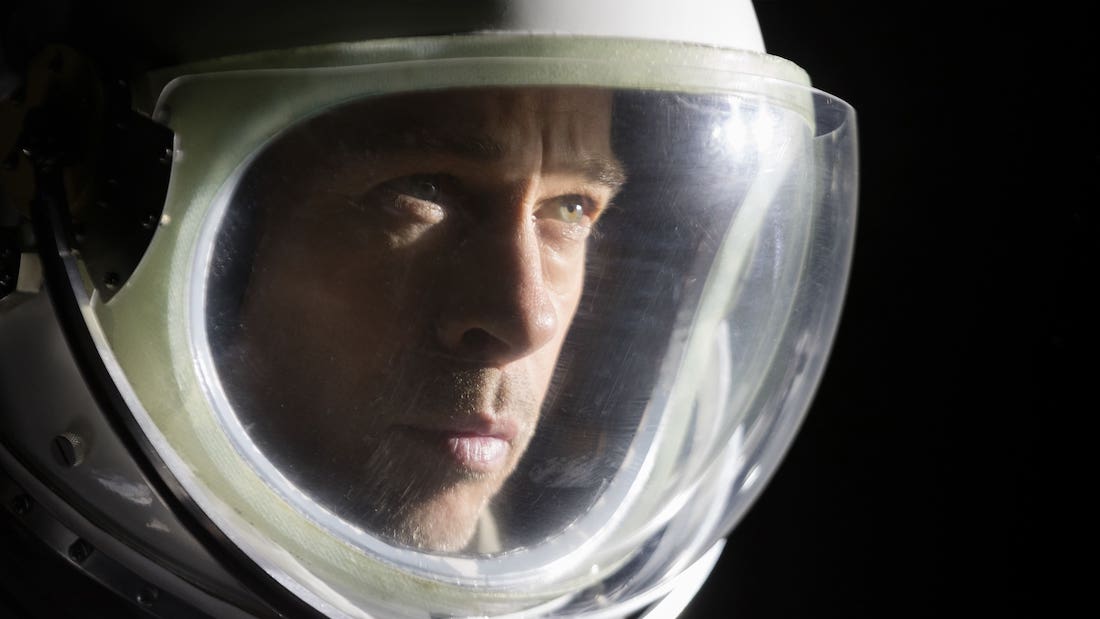 The only times Ad Astra doesn’t quite work is when it leans into its hokier tendencies and overcomplicates the sci-fi that surrounds the father-son tale. The life-or-death stakes at play with its cosmic rays aren’t clear at any point, either, which leads to some difficulties when they come into play later on. Still, a science fiction film that has you scratching your head at times is hardly a new phenomenon, and the movie as a whole barely suffers from its lapses. In fact, there isn’t a moment from Ad Astra that’s anything less than stunning. This is, clichés be damned, visionary, brilliant, and like-nothing-else-you’ll-see-this-year.

Ad Astra is everything Interstellar and Gravity promised but couldn’t deliver as completely; an awe-inspiring $100M sci-fi drama that borders on poetry in the way it gracefully reveals truths about human relationships. In another summer crammed with big-budget, long-running blockbusters, Ad Astra is both the biggest and the smallest among them. A sweeping yet intimate epic and another landmark film for intelligent, character-driven science fiction. 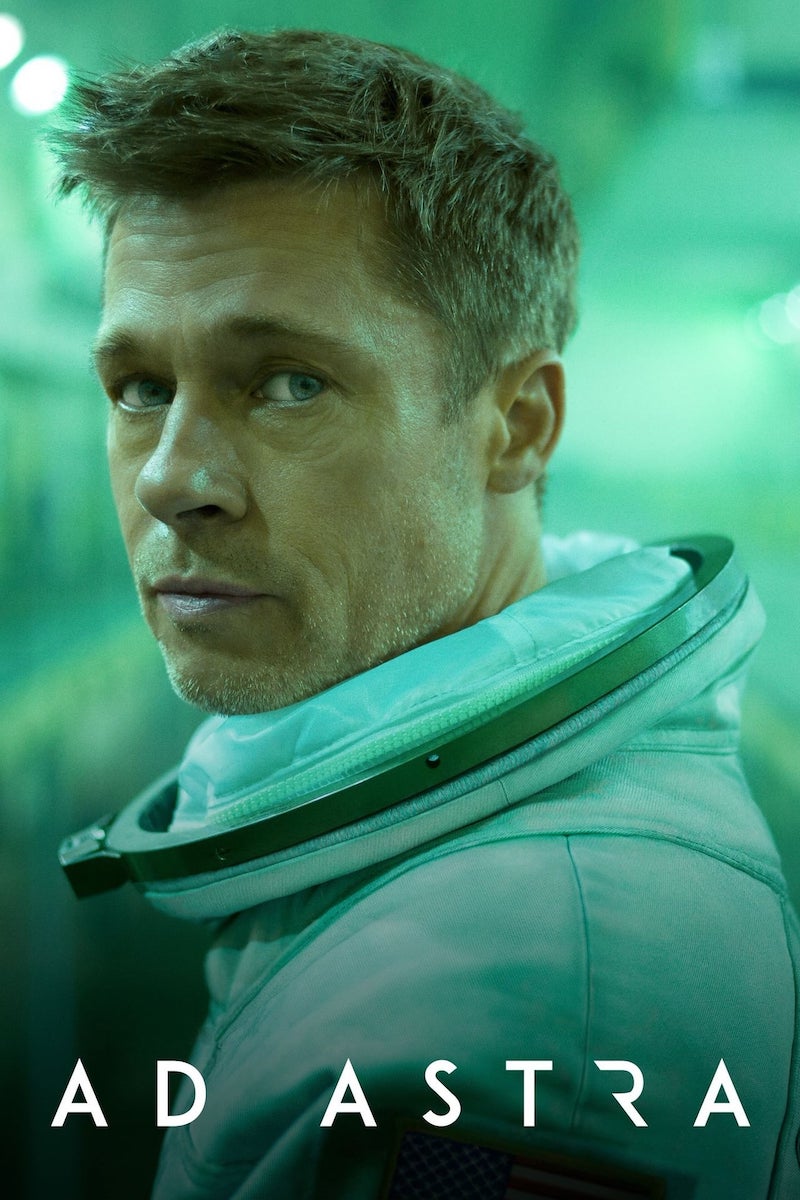