It’s a little miracle that Better Call Saul can deliver such a fantastic season finale, without the need for anything particularly earth-shattering to happen. Events are just allowed to unfold in a very plausible way, and we’re now so invested in the core relationships that the tiniest of things can cause a great deal of tension, pain, and sorrow.

Naturally, “Klick” was weighted towards the fascinating love-hate relationship between Jimmy (Bob Odenkirk) and Chuck (Michael McKean), which continues to deepen. I loved the opening scene — with Jimmy sitting at someone’s hospital bedside, which subverted expectations that it was Chuck, set some time after he fell unconscious at the copy shop. Instead, Chuck was in attendance himself (brilliantly revealed in-camera, with the simple movement of a nurse obscuring our view), and it was their mother who lay in the bed. I’m not sure exactly when this was taking place, but presumably before Chuck married Rebecca—or else she’d have been in attendance too, right? 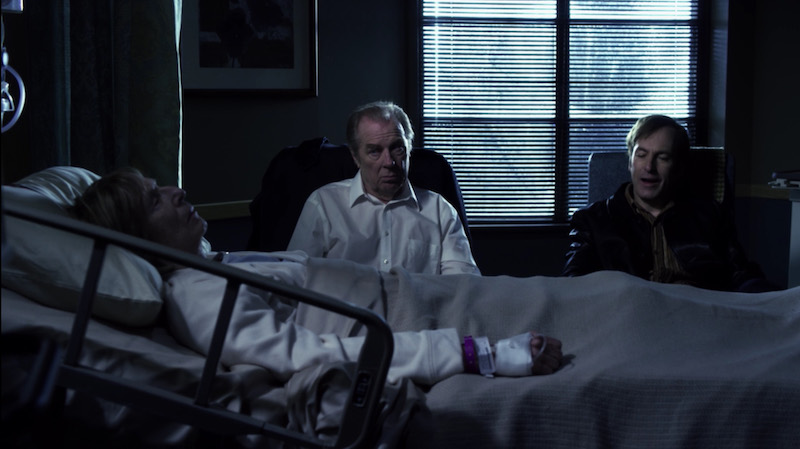 Whatever the year, we’ve never met Mrs McGill before, so this opens up another area of Chuck and Jimmy’s shared history. What made her sick? The main reason behind this scene was to further underline Chuck’s deep-rotted jealousy of his little brother—who left the room for a sandwich, and missed his mother’s final seconds of awareness before she died. A moment that saw her ignoring loyal Chuck and instead asking for “Jimmy… Jimmy…”—presumably her favourite son, although no mother would admit this openly. You had to feel sympathy for poor Chuck, having to hear that, and live with that knowledge, although it’s debatable whether deciding to pretend their mother died without saying any last words was the right thing to do. Would it really have helped anyone, even Jimmy, to know she was so dismissive of Chuck’s presence on her death bed?

The majority of “Klick” took place in the show’s present, however, with Jimmy once again involved in a hospital drama—only this time with his brother, the only remaining McGill. It was admirable that Jimmy decided to march into the copy shop to help Chuck, too—taking charge of the situation and certainly helping his brother’s chances, by getting him to a hospital all the quicker. A part of me thought the finale would revolve around Chuck having died because of Jimmy’s refusal to sabotage his own plans, but on second thought that was never really going to happen. Whatever the situation with his brother, Jimmy loves him and would never do anything to hurt him. I’m just not sure that feeling is mutual, given what happens in the very last scene. 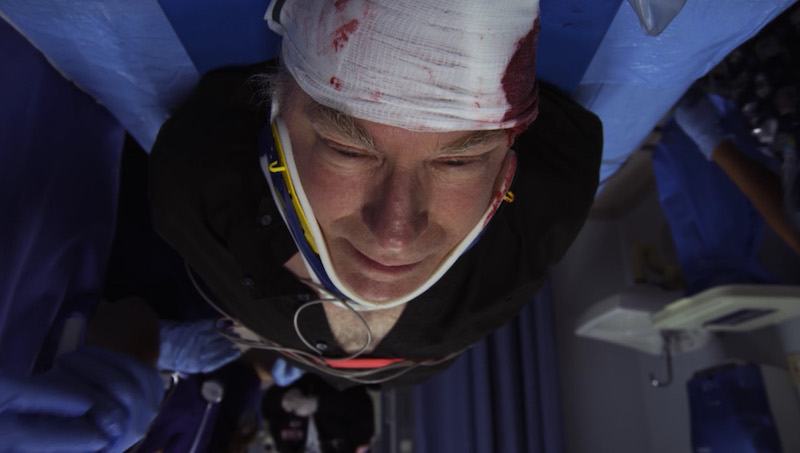 But before we get to that, it’s worth mentioning Michael McKean’s amazing performance throughout this hour. It’s always very easy to put focus on Odenkirk and Jonathan Banks, who get the majority of the season’s big moments, but in many ways McKean has the best character. When ‘hypersensitive’ Chuck was being examined by hospital staff under bright lights, and had to face experiencing things like an EKG and CAT scan, it really did feel like a hellish experience he was going through. A lot of that was communicated by the unusual, tight camera angles, but a great deal also came from McKean’s facial expressions and reactions.

And how surprising that Ernesto (Brandon K. Hampton) would lie for Jimmy, by pretending to have called Chuck before he bumped his head, which threw Chuck’s (correct) theory about Jimmy loitering close by out the window. I hadn’t considered that Ernesto would feel some loyalty towards Jimmy, and a desire to help him, but it makes sense. On some level it felt like Ernesto just wanted to see two brothers stop arguing, or that he realised it’s doing Chuck no favours being so obstinate in his belief that Jimmy is doing him wrong. I’m also not sure Ernesto even knows the full details of the situation, so it felt plausible he’d do this and save Jimmy’s relationship with Chuck—for the time being. Things were, of course, headed in an uglier direction.

Mike (Banks) didn’t get a lot to do in the finale, which was a surprise. The season’s spent a fair amount of time on Mike’s feud with Hector Salamanca (Mark Margolis), but Better Call Saul’s writers are apparently going to keep us waiting for a true climax. It makes sense, but I was still disappointed “Klick” didn’t hit a crescendo for Mike’s storyline. Still, it was great to see his weapons expert friend Lawson (Jim Beaver) again, helping him select a rifle for a long-range shot he’s planning. And the sequence where Mike was secreted atop a hill, overlooking a shack the Salamanca’s use to torture, kill and bury their enemies, looking for a clear shot on Hector, was expertly put together for maximum tension. Just seeing Mike’s ‘scope survey the scene, drifting from the parked cars, to the shack, to the Salamanca family dealing with some poor unfortunate, was enough to have you holding your breath. One pull of that trigger and who knows what might have happened. Would Mike have managed to kill Hector at that distance? Would he have been able to escape, unseen and unfollowed, before the others realise where the shot came from? 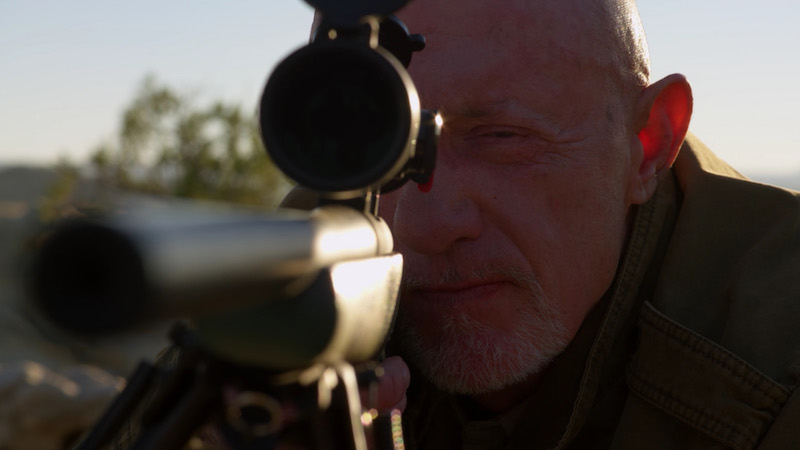 We’ll never know, because Mike didn’t fire. In an interesting development, it seems there’s someone one step ahead of Mike. Someone who knows everything about what he’s been doing, and could stop him with little more than a car horn and a note with ‘DON’T’ written on it. So who is the mystery presence who’s managed to stay in Mike’s blindspot all this time? There are very limited options, if we assume it’s someone we’ve met before on the show, so my theory is Mike’s follower is a new character working for a Breaking Bad favourite: Gus Fring. Of course, the introduction of Gus is something fans always expect to happen, and he’s the go-to option for anything mysterious happening. But does it make sense? The little message/warning is something that feels exactly like Gus’s m.o., but why would he want the Salamanca’s alive? Maybe they’re working for him during this time period, and aren’t competitors? Could be. I guess we’ll find out. I have no doubt Gus will appear on the show eventually, and the third season does seem like the best time — presuming the show will last five seasons, at least.

The only other major scene to discuss was the last one. Jimmy received word from HHM that his brother’s quit the firm, so went round Chuck’s house and discovered he’s now lining the interior with foil sheets. It seems Chuck has accepted that he was mistaken about Jimmy forging legal documents to make him look a fool, and for lurking around near the copy shop after paying an employee off, but has started to believe it’s the electromagnetism that’s affecting his mind. Of course, none of that was really true. Chuck’s no fool. He knows the lengths that Jimmy would go to, and how his brother’s mind operates. The whole scene was a setup, to make Jimmy feel guilty that his underhanded ways have ended his illustrious brother’s career and turned him even more crazy. Jimmy confessed to his sins (which again showed him in a very positive light), but the matter won’t be laid to rest. Chuck had secretly recorded their conversation, and will presumably use the tape to get Jimmy disbarred. The fact Jimmy’s still a lawyer on Breaking Bad suggests things won’t get that far, but some kind of punishment is definitely on the cards. Maybe Chuck will use it as leverage instead? To get the Mesa Verde client back from Kim (Rhea Seehorn)? 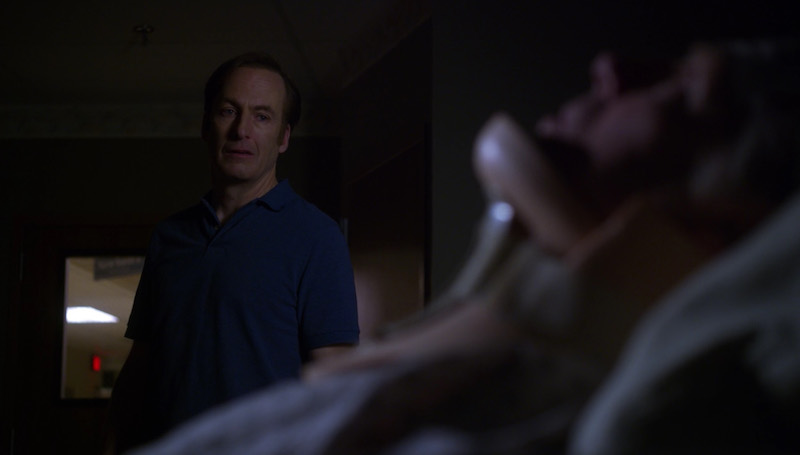 It says something about this show that the finale was, largely, a variety of scenes between two brothers, focusing on their bizarre relationship and opposing personalities. Jimmy’s a garrulous rule-breaker, driven in his career because he idolises his big brother. Chuck’s a stickler for the rules, can’t cope with the idea his little brother’s involved in his noble profession, and does what he can to tear Jimmy down at every opportunity. The genius of the show is that, seriously, I can never quite bring myself to hate Chuck. He’s a bastard, but in broad terms he has a point. Jimmy does illegal things and shouldn’t be practising law. It just hurts because, well, brothers shouldn’t behave like this. But there’s no easy answer to their grievances, because even if Chuck supported Jimmy and helped him, Jimmy only really succeeds as a lawyer because of the more nefarious skills he brings to the table — skills Chuck couldn’t ever tolerate, quite rightly.

“Klick” was a great episode, but not the best finale. I preferred it over season 1’s, just about, but only really because we know the characters better now and stuff hits harder. My main issues were the lack of resolution to Mike’s storyline, which was otherwise building very nicely, and how the final twist with Chuck’s tape recorder was too obvious. Overall, as a season I think this was an improvement on the first, but I hope the writers started to draw everything together now. I’d particularly like to see Jimmy and Mike working together more, as otherwise their storylines feel like two halves of different shows at times.