Hap and Leonard, the latest US crime series to find its way to Amazon Video in the UK, is something of an odd beast. Adapted from Joe R. Lansdale’s best-selling novels, by Nick Damici and Jim Mickle, who also worked on the excellent Lansdale adaptation Cold in July, and with a top-notch cast headed up by James Purefoy and Michael K Williams, this isn’t quite an A-list series, but if you relax into its rhythms and go with the laid-back flow it proves a hugely enjoyable ride.

Purefoy is Hap Collins, a Texan good ol’ boy with a dislike of killing, whose idealism has lapsed as he drifts through life coasting on his charm; Williams plays his best-friend, Leonard Pine, a gay Vietnam vet with considerably fewer qualms about violence, and all the best lines (“I tell you boy, I let you talk me into some dumb shit, but this here takes the dumb shit cake”).

The year is 1988, and our two heroes are simply trying to get by, scrabbling around the margins of their Texan town and doing the odd rose picking job here, the odd pick-up there—all cash in hand, of course. If they have low expectations of life its because Texas in the ’80s is a places of extremes—where the oil rich are getting richer and everyone else is just trying to survive. In those conditions it makes sense to keep your head down, ask no questions, crack open a beer at the end of each day, and celebrate the fact that you might be broke but at least you’re alive. 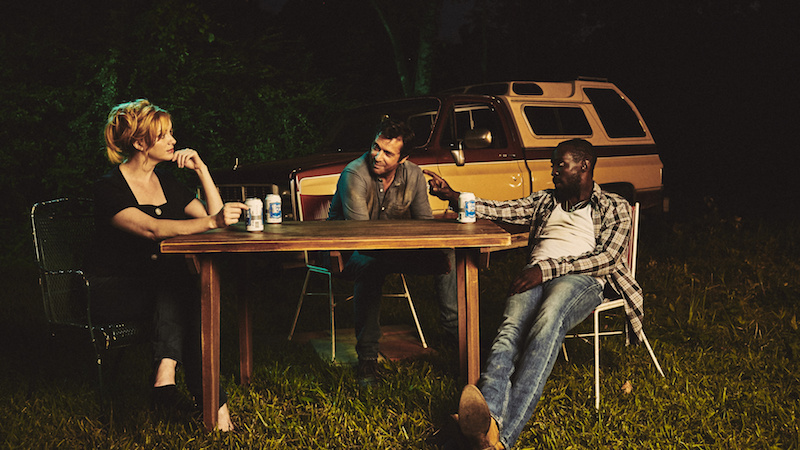 Unfortunately for our heroes, their peaceful existence is swiftly shattered when Hap’s ex-wife Trudy (Christina Hendricks) rocks up. Trouble with a capital T, the wayward Trudy has a plan that’s apparently going to make them all rich. It involves her most recent ex-husband Howard, an idealistic hippy newly released from jail—where he apparently learnt of the location of a large sum of money. The only problem? He doesn’t know the area very well (especially its swampy waterways) and can’t track down that cash.

Against their better judgment, Hap and Leonard are dragged into this ‘get rich quick’ plan and that’s where things start to go seriously awry. Not only does Howard already have a small crew, including the fearsome Paco (Neil Sandilands), but it turns out that there are two other interested in this money: the hyped-up, one-liner wielding Soldier (Jimmi Simpson) and his near-monosyllabic but not to be messed with punk girlfriend Angel (Pollyanna McIntosh). What follows is a classic ‘heist gone wrong’ tale, with endless backstabbing, betrayal, and a growing sense that our heroes should trust no one, least of all those who claim to be trying to help. 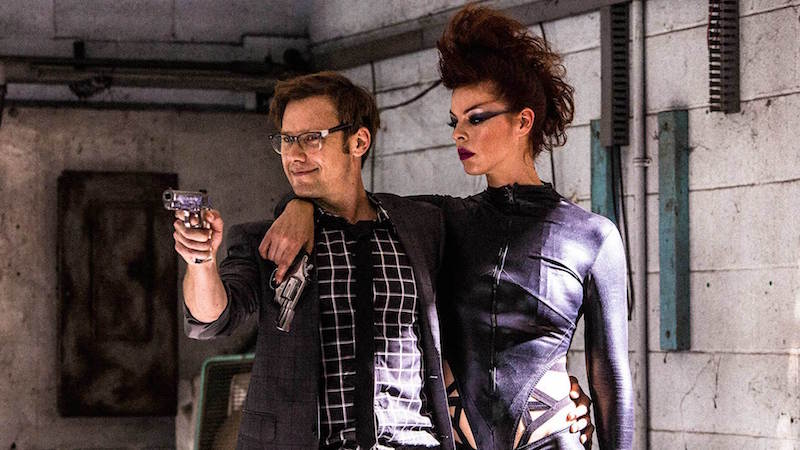 Hap and Leonard is a curious mix of the easygoing charm of The Rockford Files and the hyper-stylised violence of a Quentin Tarantino movie. Some of that violence—otably a scene in the fifth episode where Soldier tries to convince an intransigent Trudy to confess where she’s hidden the money with the help of a set of nails—are almost impossible to watch in their gruesome graphicness, yet at the same time there’s a playfulness that recalls Tarantino’s earliest work (a connection only heightened by Simpson’s uncanny resemblance to a True Romance-era Christian Slater).

Yet, while the central story is gripping, the show’s real appeal lies in the friendship between the two leads. Hap and Leonard clearly wants to tap into that sweet spot where Justified hung out; a world where half the enjoyment comes from simply spending time with these characters in an America we don’t often see on television. There are hints, too, of the brilliant and prematurely cancelled Terriers, which had a similarly laconic feel and sense its story was never quite as important as the time spent chilling with the cast. 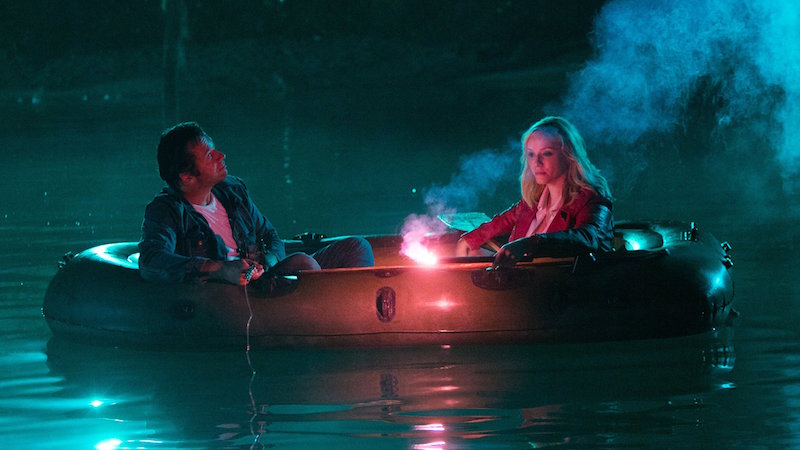 Purefoy and, in particular, Williams, make for engaging company, and its easy to believe that these men have been friends since childhood and that the more truculent Leonard has always despaired about the good-natured Hap’s inability to walk away from minxy Trudy. The period setting is beautifully evoked—with more than a hint of The Coen Brothers’ Big Lebowski in the way it tackles the curdling of Sixties idealism into Eighties capitalism, while Leonard’s struggles with everyday racism are subtly and honestly drawn. The dialogue is sharp and atmosphere suitably relaxed, ensuring it’s easy to imagine spending more than one season with Hap and Leonard as they do what they to do to get by.

That said, it’s by no means perfect. A red-faced, out-of-shape Purefoy is excellent at capturing Hap’s genial gone-to-seed appeal and his drifter’s charm, but his Texan accent meanders all over the US and it’s hard not to picture any number of American actors (Josh Holloway, Timothy Olyphant, Dennis Quaid?) who would’ve been equally as strongly, if not better, in the role. There are occasional issues with tone and pace as well; a sense that Damici and Mickle are almost a little too relaxed about getting to the crux of their tale, and the odd lurch between subtle character-driven drama and less interesting by-the-numbers storytelling. This is particularly true of the finale, which is both a warm-hearted look at Hap and Leonard’s long-standing friendship, and how and why it was formed, and a tonal misfire that attempts to trick the audience with obvious red herrings and ludicrous back-from-the-dead moments. 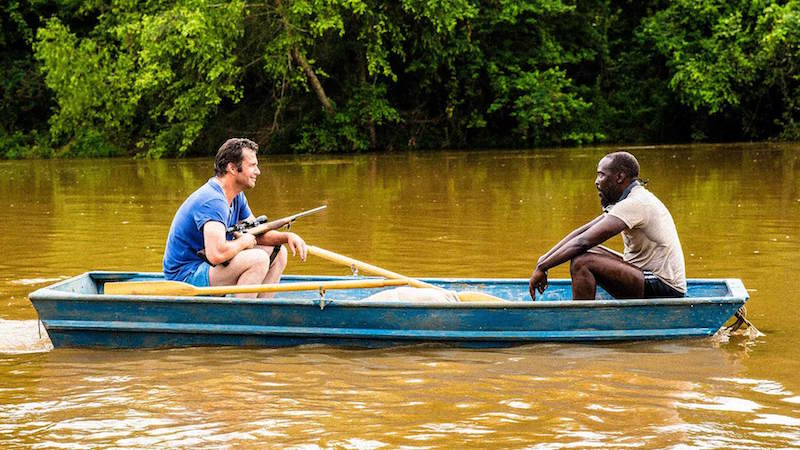 They just about get away with it, because Hap and Leonard’s easy camaraderie makes the more outlandish parts of their tale slip down. Mad Men’s Hendricks excels as the indomitable Trudy, a woman who’s spent most of her life running and just wants to carve out a place in the world that’s truly her own; while Simpson makes for an enjoyably off-kilter villain, and McIntosh has a great deal of fun as an unstoppable killing machine. There’s also entertainment value in watching how everyone’s personality changes as the pressure mounts, with Trudy doubling down even as Bill Sage’s Howard turns out not to be quite the amenable hippy he’d have everyone believe.

Ultimately, though, this is a diverting and atmospheric new series that slips down as nicely as the chilled beers our heroes share on their porch. Anyone looking for a gentle diversion of an evening could do worse than check it out.