Early on in the first episode of This is England ’90, Gadget (Andrew Ellis)—who might as well have been looking straight down the lens at the home viewers—commented to friends Shaun (Thomas Turgoose) and Milky (Andrew Shim) that the reason they all wanted to still eat school dinners still was “… about the nostalgia, innit. That’s why we come here”. Wink wink.

Since its inception in 2006 as the traumatic, terrific feature film This Is England, writer-director Shane Meadows has used this small-screen continuation to reflect on the politics and pop-culture of Britain since Thatcher’s 1980s. The reason it’s managed to gather such critical and popular acclaim is, well, “about the nostalgia, innit”—but also, more importantly, he successfully developed a simple tale of a bored boy and his mad mates into a truly engrossing ensemble drama—the likes of which arrive once in a generation. 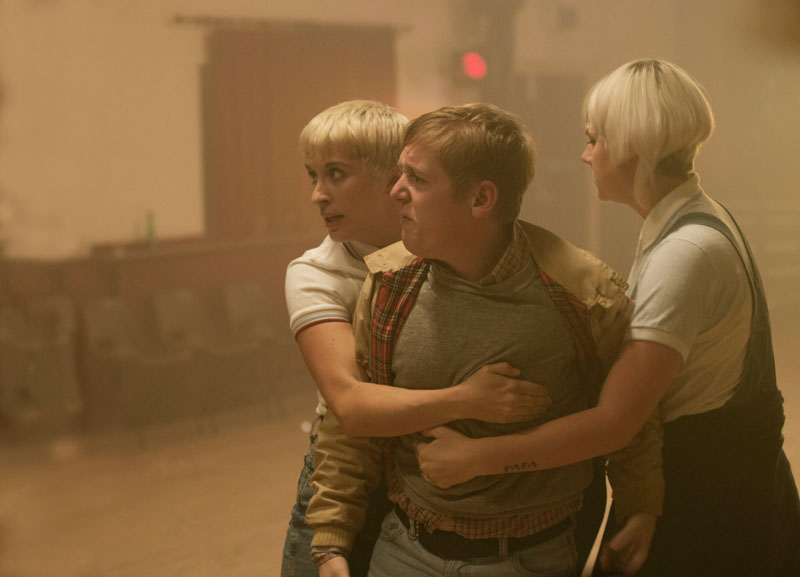 We come here for the throwback haircuts, sure. And the mention of coffee whip, the sight of winklepickers, and the sounds of The Stone Roses satisfy our wistful craving for bygone days. But we care about these people now—we don’t just want the school dinners… we want our mates. We want the gang. We’re all Shaun, caught in a frenzied friendship that we can’t seem to shake off—even though we know it makes us cry as much as it makes us laugh.

Shane Meadows knows this by now. In a highly and unusually stylised scene in which Woody (Joe Gilgun) and his parents attempt to resolve a dispute over the phone; a dispute that rested on his parent’s mistaking his new beard for a kind of spiritual ambivalence, it is writ large that Meadows knows it. Woody half-listens to their apology whilst keeping his stoned eyes on the television. The show he’s watching is a dry documentary about a tribe in the Amazon jungle. He watches, perplexed by their practices and traditions, himself surrounded by spliffs and baby paraphenalia, but he admires this tribe’s way of life. He wants to watch it to conclusion in peace. This scene is a meta move by Meadows (and co-writer Jack Thorne) to acknowledge how This is England has became a world for us to get lost in from our sofas, too. And this opening episode is the start of its very own conclusion.

TIE90 opens as both previous series, covering ’86 and ’88, have: with japes and jokes and sordid set-pieces. I’ll never look at a pool triangle the same way again! It seems like a light-hearted skip into a brave new era, but is importantly accompanied by a throbbing coda of foreboding that lingers beneath the giggles. 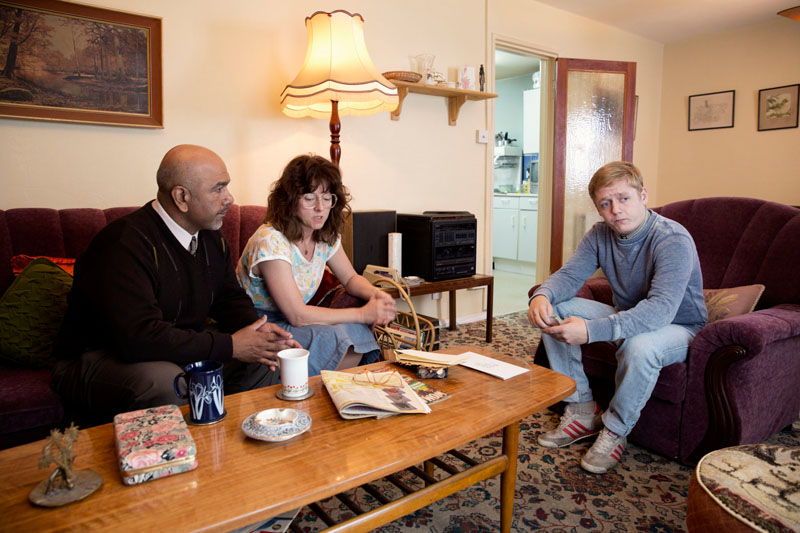 The business of what the gang have been up to do is dealt with swiftly. It’s quickly established that Lol (the extraordinary Vicky McClure) and Woody have taken a back seat in the group’s shenanigans because they’ve slipped into long-term love, parenting, and bill-balancing. All whilst the younger generation—Shaun, Gadget, Trev (Danielle Watson), Kelly (Chanel Cresswell), and Harvey (Michael Socha)—favour bucket hats, video games, and pill popping.

This split plays out beautifully, with Lol joining the gang for a spaced-out ‘Madchester’ night in a sticky-floored town hall. Shot in slow-motion and soaked in soft, cheap disco lights, it’s a trippy vision of a simpler past. As Kelly’s eyes roll back and Gadget and Harvey’s hands wave (and deal drugs) to the bass lines of Mani and Paul Ryder, and as Shaun gets into a kerfuffle with Smell’s (Rosamund Hanson) new new fella, Lol looks visibly shocked and lost but—conversely, finally—content. She finally knows that where she belongs is back on the sofa with Woody—not chasing youth in dismal venues. After the emotional pummelling that Lol has been dealt throughout the This is England series, this opening episode suggests her conclusion may be watching dull documentaries with her adorable husband; holding hands and listening to the baby monitor.