And so, rather like The Wizard of Oz’s Dorothy, Outlander’s Claire (Caitriona Balfe) and Jamie Fraser (Sam Heughan) find themselves over the English Channel, acclimatising to the profoundly different world of 18th-century France. However, while the cultivation of several vivid social connections dominates Ira Steven Behr’s “Not in Scotland Anymore”, the episode also spends some time addressing Jamie’s recuperation from the abuse received at the hands of ‘Black Jack’ Randall (Tobias Menzies).

It dominates the episode’s opening nightmare, as Jamie’s dreamed of desire for Claire is transformed into terror when Randall’s face stares back at him. Ending in Jamie’s violent emergence from the dream, the scene provides, with the later sympathetic attempt by Claire to normalise their sexual relations and the revelation the long thought dead Randall is alive, an appropriate exploration of post-traumatic anxiety and fear. Randall’s snapping open of his eyes symbolically indicates the reports of his death have been greatly exaggerated, but Gabaldon’s readers would have been aware of his survival. The series keeps this news back to provide a darker, intimate subtext to a predominantly lighter and funnier episode. 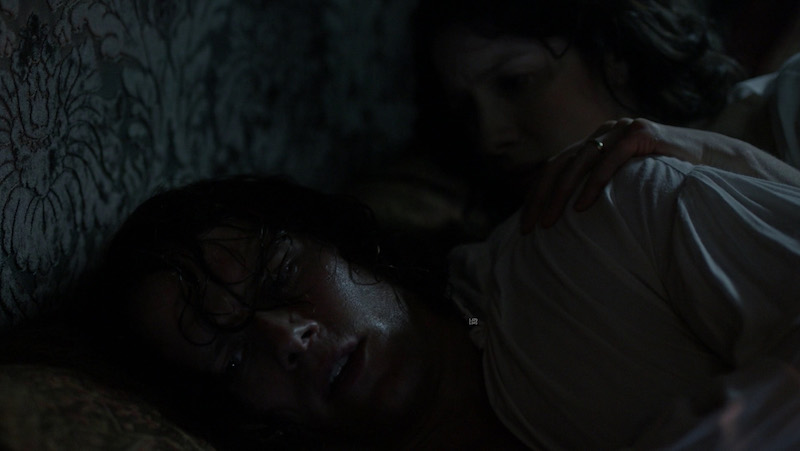 Their mission to inveigle themselves into the milieu of Charles Stuart, and attempt to dissuade him from supporting the Jacobite uprising, takes place in a pre-revolution Paris, as Claire acknowledges in her voice-over. This is a society still dominated by the nobility and the bourgeoisie. The power relations between them, the state, the church, and Louis XV’s divine right to rule, would shift as the Enlightenment’s ideas and values altered the theatrical and courtly foundations of the previous monarch. What we see at Versailles in this episode are the dying embers of royal absolutism.

However, before Claire and Jamie put on their glad rags to hook the interest of the Finance Minister Monsieur Joseph Duverney (Marc Duret), we get to meet some rather colourful characters. To try and ease Jamie’s nightmares, Claire consults apothecary Master Raymond (Dominique Piñon, a familiar face from French cinema, including Diva, Betty Blue, Delicatessen, and Amélie) and discovers she has, through her antagonism of the Comte St. Germain, made an instant friend.

We learn something of the etiquette of dueling in France, too, as Jamie and Murtagh (Duncan Lacroix) practice their sword skills in public, in an attempt to strengthen Jamie’s injured hand. It also gives us Murtagh’s rather insightful opinion of France compared to the green vistas of Scotland, as “a misery of a country” where the air stinks of “arses and armpits” and “reeks of the chamber pot.” 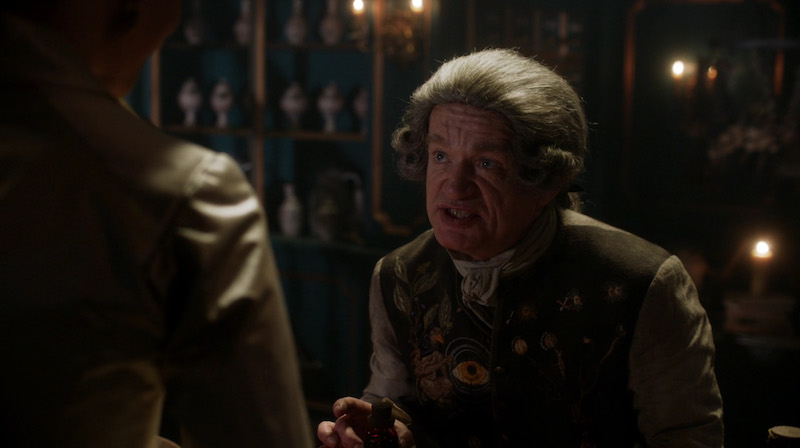 It’s a fairly accurate view of the personal hygiene of the times. Bathing was rare and soap did not feature in French culture until the 1790s. Head lice were prevalent. As there were no toilet facilities, houses would stink of chamber pots and this even extended to vast palaces such as Versailles. So, when you see the glory of Versailles later in the episode you’re looking at people who didn’t wash, wore wigs infested with lice, and stood around gossiping about each other in rooms that stank of human waste. Mind you, I doubt 18th-century Scotland was any improvement on that.

After arguing to the contrary, Jamie and Murtagh decide it’s best to continue currying favour with Charles, despite his misplaced religious fervour, and remain on the man’s best side. Clearly, the Bonnie Prince will take some delicate handling, but the meeting does at least open doors to the French court, where they may able to sabotage any fundraising for the uprising at its source—the aforementioned Minister of Finance Duverney. 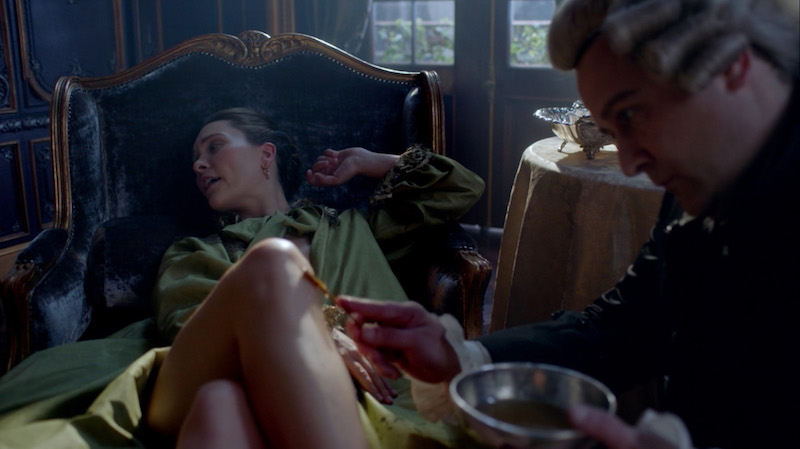 In perhaps the episode’s funniest scene, Claire also cultivates the friendship of Louise de la Tour de Rohan (Claire Sermonne, revelling in a provocative character designed to amuse). Her connections at the royal court and chaperoning of Mary Hawkins (Rosie Day) towards an arranged marriage with an elderly aristocrat ensure that Claire and Jamie have an invite to Versailles. Mary is going to become a central character and it’s no accident that Claire seems to recognise her name.

However, I suspect some artistic license is employed in depicting Rohan’s beauty treatments. It was not common for European women to remove their body hair, and indeed the Perret razor wasn’t introduced until the 1760s, so Rohan’s waxing of her legs and pubic hair is far ahead of its time. Beeswax was certainly a treatment introduced by the Greeks and the Egyptians, but for European women the application of vinegar and cat’s poo was the order of the day. With their use as a depilatory, I doubt Jamie would’ve been as keen to explore Claire’s ‘honeypot’ later that night. 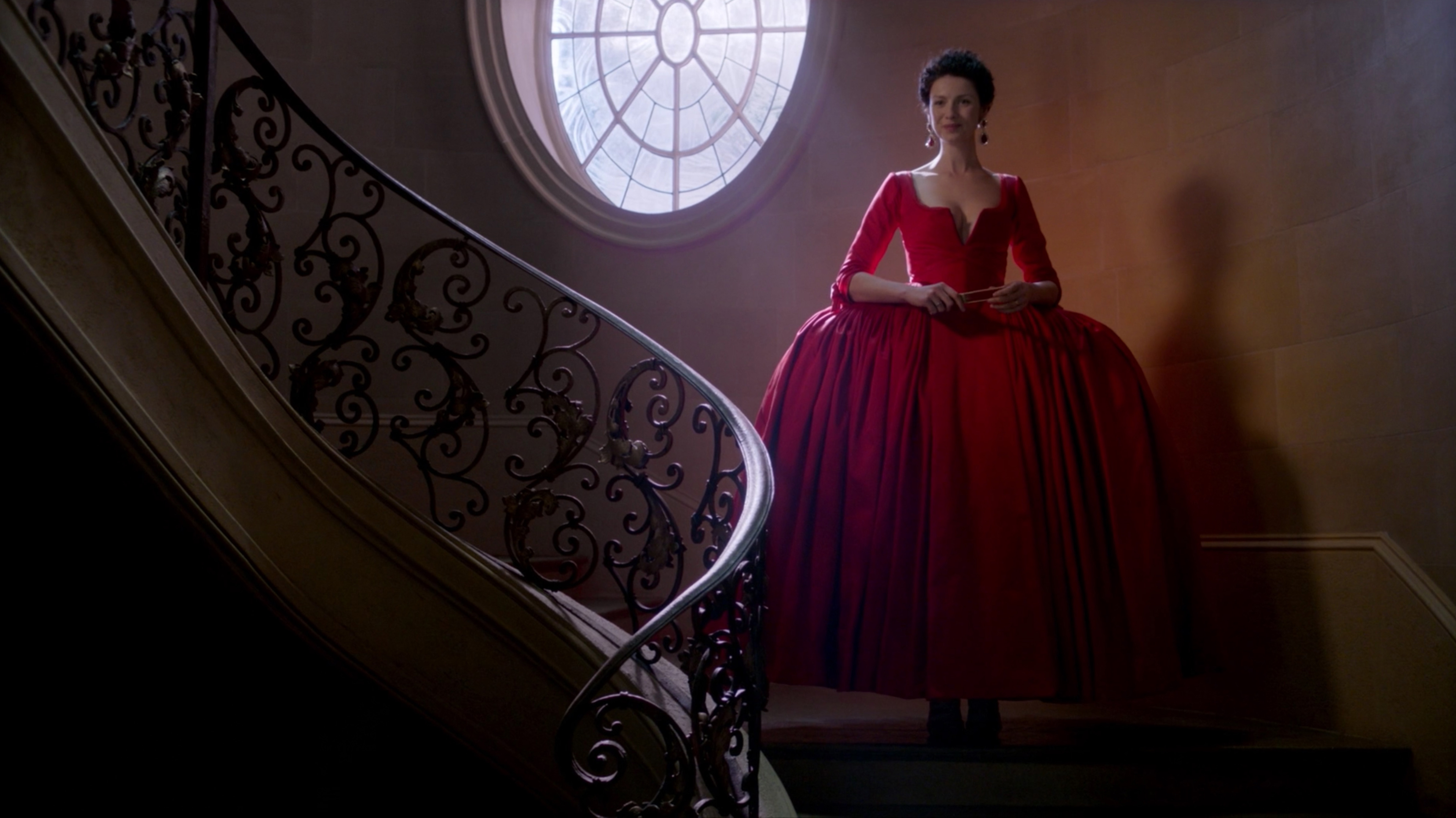 The setting of Versailles allows the production team to really impress. Stephen McNutt’s beautiful cinematography, Terry Dresbach’s stunning costumes, and the mixture of Prague and UK locations and sets, turn the episode into a sumptuous, decadent vision of court intrigue and politicking. As Claire wows Versailles with her provocative red dress, Jamie’s audience with Louis XV (Lionel Lingelser) plays against this bourgeois extravagance. Blackly comic the ‘dressing of the king’ ritual may be, but it is quite accurate to depict the king conducting business with the court while doing his business into a throne-shaped chamber pot. Obviously the Church’s issues with heretics have constipated his majesty and Jamie wastes no time in suggesting a good bowl of porridge as a remedy for his uncooperative bowels.

Meanwhile, after a discussion about English terminology for male genitalia with a group of society women, Claire encounters foot fetishist financier Monsieur Joseph Duverney. Despite a misunderstanding that sees Jamie hurling him into a lake, they secure his friendship with an apology and the promise of a game of chess. Claire and King Louis also exchange a very knowing look that suggests he’s already aware of her reputation. No doubt, that’s a connection we will revisit. 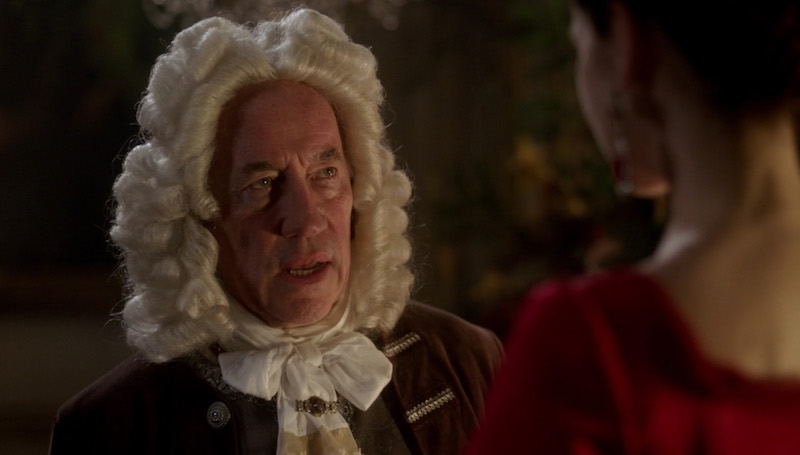 However, a connection of a different kind becomes the focus of the episode’s denouement. Murtagh spots the oily Duke of Sandringham (Simon Callow)—who hasn’t been seen since “By the Pricking of My Thumbs”— after failing to deliver Jamie’s Petition of Complaint to the court, and instead handed him and the document over to the sadistic Randall. Claire doesn’t believe for a minute the Duke’s claim he was forced to do this and, after Jamie and Murtagh make their excuses from his company, we see him in his true colours. He turns on her and makes matters worse by introducing her to his secretary Alex Randall (Laurence Dobiesz), younger brother of ‘Black Jack’ and the bearer of the news that his evil kin is alive and well in England.

Callow may only appear briefly among the episode’s exciting line up of new characters, but he certainly makes his impact felt as the Duke walks away, clearly revelling in her anguish. The episode culminates with fireworks both literal and metaphorical, as Claire tries to deal with the news and wonders how she will tell Jamie, as the court of Versailles is beguiled by explosions filling the night sky.