Ant-Man, the newest film in Marvel’s Cinematic Universe (MCU) is a little rougher around the edges than some of the studio’s recent offerings, but it makes up for that by telling a great little story with heart and humour. And, of course, it helps that it’s anchored by charismatic and charming performances from those involved, especially comic actor Paul Rudd.

At this point, Marvel Studios is running a highly efficient production line. It’s been that way for awhile, so it’s safe to assume most new entries into the MCU will be a polished and entertaining strand of their grand tapestry. Many were expecting the behind-the-scenes drama of Ant-Man’s long production history—in which director Edgar Wright (Shaun of the Dead, Hot Fuzz) left the project over “creative differences”, leading to Peyton Reed (Bring It On, Yes Man) replacing him—to negatively impact the final film. If it did, it’s barely noticeable. This doesn’t feel as idiosyncratic and unique as a full-blooded Wright movie, but it has a similarly lively atmosphere, and a great sense of how to deliver crowd-pleasing laughs through visual comedy. 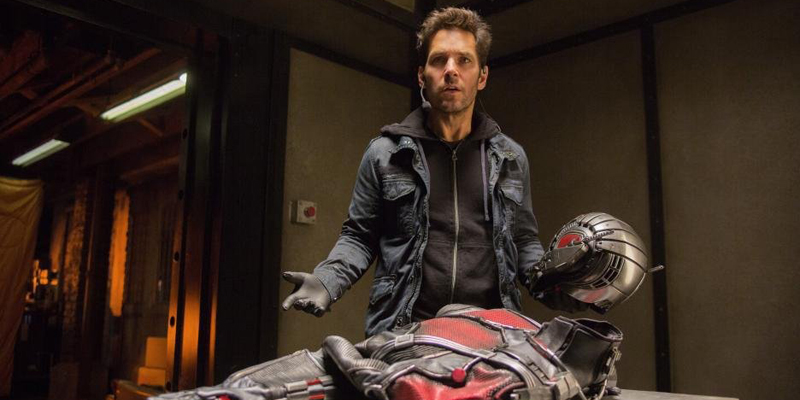 The story takes place within the familiar heist genre. Rudd plays Scott Lang, an expert thief fresh out of prison, who meets Dr Hank Pym (Michael Douglas) and learns the history of his Ant-Man suit—a piece of cutting-edge technology that allows its wearer to shrink in size whilst growing in strength. Pym and his daughter Hope van Dyne (Evangeline Lilly) need Lang to help them steal a version of the suit from Pym’s spiteful former protégé Darren Cross (Corey Stoll), who’s recreated the tech and is attempting to sell it to the highest bidder.

Ironically, Ant-Man takes place on a considerably smaller scale than something like Avengers: Age of Ultron. This film’s more concerned with human responsibility and whether certain technology can ever be safely utilised in the real world. While Tony Stark recently created artificial intelligence and won’t hear about limiting scientific progress, Pym is all about drawing a line beyond which he won’t cross. To him, seeing his miniaturising suit used as a weapon to wreak havoc would be something he couldn’t live with, so this film’s about preventative measures. 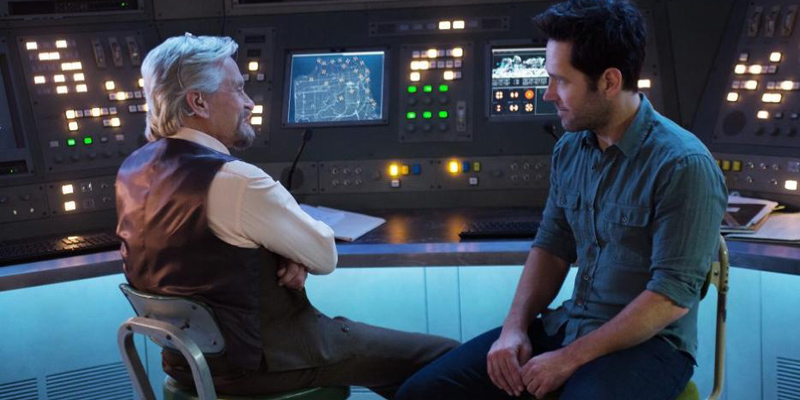 There’s a lot going on in Ant-Man, but it’s more streamlined than you might expect. The influence of Wright can be seen in the way the film cleverly handles its visuals, as the story is stuffed with sight gags and has a fun rhythm to its editing and use of montage. It’s very self-referential, too—acknowledging the idea that Ant-Man as a superhero might be difficult for audiences to accept, but still able to press forward with a wry smile and a willingness to go to some crazy places. It’s able to have action scenes fuelled not only by Scott’s control over the suit, but his ability to mentally manipulate ants to aide his daring robbery. And the big Marvel action climax that would usually involve thousands of civilians in jeopardy? This time it’s a one-on-one fight taking place on a toy train set—heavily featuring Thomas the Tank Engine. In every way, Ant-Man takes the hugeness of the MCU and shrinks it down to something more recognisably human and emotionally honest.

Unsurprisingly, it’s not without flaws too. Its eagerness to hint at, or directly discuss, its position within Marvel’s wider milieu is sometimes to its detriment. There’s uneasy integration of a second tier Avengers character, and you always get the sense there’s more story to tell than the film has time for. The opening is a flashback to the era of a younger Pym (who once wore the suit and was a superhero in his own right), working with his S.H.I.E.L.D colleagues Howard Stark (John Slattery) and Peggy Carter (Hayley Atwell) in the 1960s. It’s a strong opening, but such a scene inevitably asks so many questions the film just doesn’t have the space to provide the answers to. 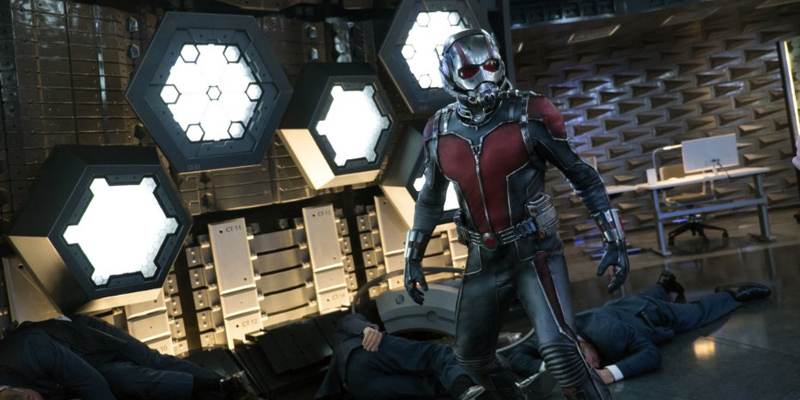 As you watch, though, it’s hard not to think that Ant-Man’s imperfections are a key part of its charm. It’s an underdog in the world of the big-name Marvel superheroes, and it challenges Guardians of the Galaxy for the honour of being the studio’s weirdest, quirkiest film yet. There’s a freedom to everything because it knows it’s connected to the ongoing Marvel story (together with Thanos and his Infinity Stones), but it also knows that it doesn’t have to indulge that right now. It’s actusally more concerned about having fun with its own quirks and foibles; the mobilising of an army of ants in a heist, or just showing how Ant-Man can really use his opponents size against them. (There’s something very different about the action here, too, because the suit has no Iron Man-style weaponry, which makes it clear we’re dealing with a different kind of hero.)

Sadly, there’s little that’s truly original about this redemptive tale, outside of how bizarre its background and circumstances are. You’ll have seen these ingredients countless times before, and how much you like them will depend on whether you’re entertained by the humour and convinced by Rudd’s laconic star appeal. The rest of the cast is great—Douglas brings Hollywood gravitas, Lilly excels in the training montages (her character’s best days are to come), and Michael Peña (as Lang’s former cellmate Luis) delivers a scene-stealing turn—but it all rests on Rudd’s capable shoulders.

Ant-Man adds up to a worthy addition to the Marvel pantheon, and registers as a sign this studio are prepared to do things unconventionally. All their films adhere to formula, but Peyton Reed’s manages to be a little looser, a bit faster, and a touch more lighthearted. If nothing else, Ant-Man’s not your typical superhero movie, which can only be a good thing.