If you were a teenager in the 1990s, there’s a big possibility you still use lines from Clueless in your everyday life. Between “As if!” and “You’re a virgin who can’t drive”, the trend-setting 1995 teen flick was like the best earworm ever, wriggling its way into the lives and minds of young adults everywhere. Better yet, with its timely exploration of a new breed of cosmopolitan teen, it guaranteed that even non-American viewers felt like they’d lived through (or at the very least survived) U.S high school.

That was 20 years ago. It’s almost impossible to believe that two decades have passed since Cher Horowitz (Alicia Silverstone) cat-walked onto our screens; dolled up to the nines and blissfully unaware of just how ridiculous she seemed. Despite her surface-level absurdity (she uses a computer to select her outfits and frets about her designer frock when held at gunpoint), she quickly became the Hollywood prototype for attractive young women with hidden depths—see also 2001’s even-perkier bombshell, Elle Woods, in Legally Blonde. 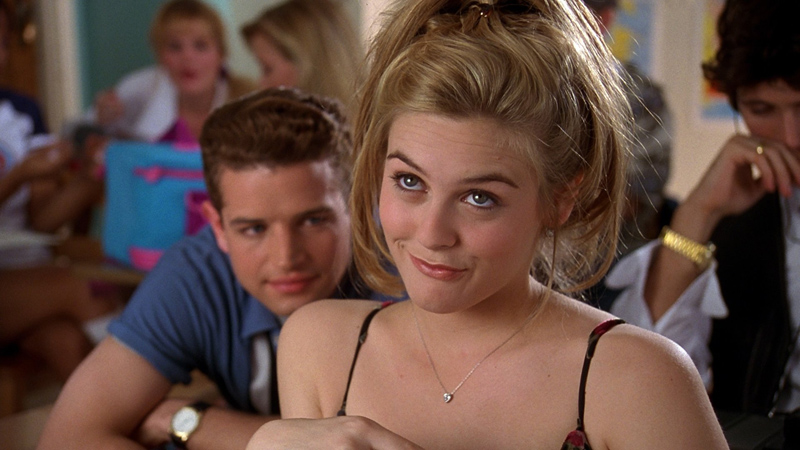 Off screen, Silverstone became the go-to girl whenever a ’90s director was looking to cast the role of a smart-mouthed, self-aware youngster in their movie. Described by her Clueless director, Amy Heckerling, as having “that Marilyn Monroe thing”, Silverstone blitzed the 1996 MTV Movie Awards and, aged just 19, signed an $8-10m multiple movie deal with Columbia TriStar. Meanwhile, her production company, First Kiss Productions, was given a first-look option on the studio’s projects. The decade was hers for the taking.

Perhaps more impressively, Clueless represents a huge leap in the evolution of the teen flick. Seizing on the yuppie dramas of the 1980s (headlined by male stars like Tom Cruise and Michael J. Fox), it dared to do something different to the films of John Hughes, the Brat Pack, and their imitators. Though a dash of Hughes’ kids vs. adults formula is evident in Cher’s battle through teendom (not least in her somewhat misguided attempt to help her lawyer father), director-writer Amy Heckerling’s priorities lay elsewhere.

Heckerling made a significant contribution to the ’80s teen flick scene with the gritty Fast Times at Ridgemont High (1982), proving she had an impressive grasp on how youngsters think and—most crucially—what they think is cool. Though Clueless is a very different film to Ridgemont, it retains that self-awareness. Inspired by Jane Austen’s 1815 novel Emma, Clueless transfers the plight of its unlucky-in-love protagonist (renamed Cher) to present day Beverly Hills. As she and her friends navigate high school, love, and the challenges of transforming a “tragically unhip” girl (Brittany Murphy) into the next hot thing, they drop quotable one-liners like nobody’s business, and resolve to worry about growing up tomorrow. 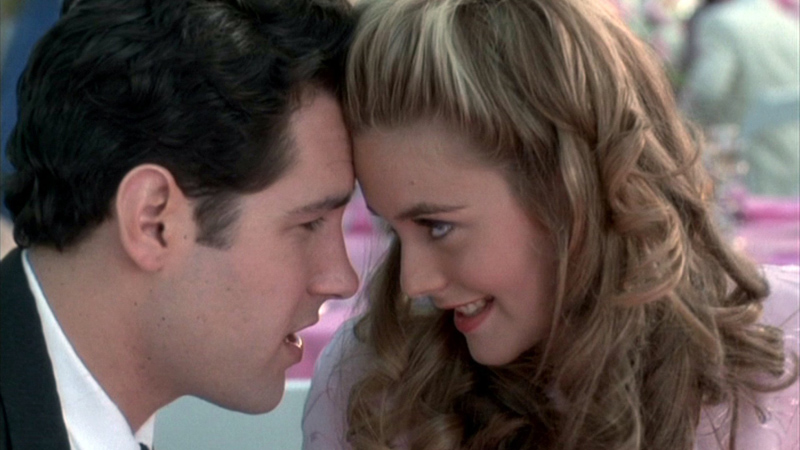 With its zeitgeist-y soundtrack, OTT fashions, and knowing sense of humour, Clueless became the sleeper hit of ’95, transforming its modest $12m budget into a U.S box office haul of $56m. It was a critical darling, too, and rightfully so. Heckerling’s zingers-packed script packs satire in by the closet-load; but there’s heart, too—Cher’s matchmaking marks her out as surprisingly selfless, while her burgeoning romance with step-brother Josh (Paul Rudd) is just the right side of sweet. And Heckerling never idolises her affluent young protagonists; instead portraying them as borderline alien, revelling in passed-on wealth, and possessing bubblegum priorities. If the ’80s belonged to the yuppies, the ’90s belonged to their overprivileged kids. Times, they were a-changing, and Clueless effortlessly tapped into that—both making fun of and celebrating its wacky heroes and heroines.

It helped that the early ’90s were a wasteland for movie teens, with only Boyz N The Hood (1991), Don’t Tell Mom the Babysitter’s Death (1991) and Dazed & Confused (1993) offering movie-going youngsters something to spend their money on. We have Clueless to thank for the youth-boom that followed. There was 10 Things I Hate About You (1999), which took the Clueless route by reinterpreting literature with The Taming of the Shrew; while Cruel Intentions (1999) went edgy, adapting Les Liaisons dangereuses for teens. The steamy result saw Sarah Michelle Gellar shattering her good-girl Buffy image (purring: “You can put it anywhere”) and Ryan Phillippe establishing himself as hunk du jour. We can probably even thank Clueless for The Craft (1996), with its far darker visions of American teendom, and perhaps even the ensuing slasher movie revival with Scream (1996). 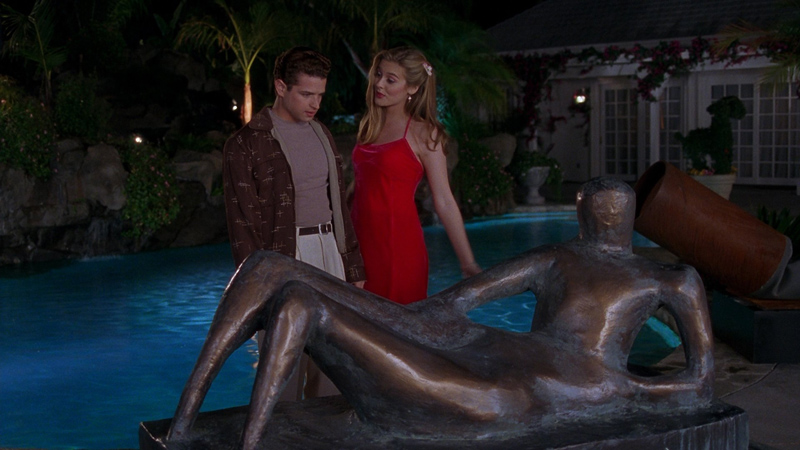 Unlike, say, Jennifer Lawrence, whose smart movie choices have helped her avoid pigeon-holing, Silverstone has become forever synonymous with Clueless—so much so that her most successful post-’95 endeavour was short-lived 2003 TV series Miss Match, in which her divorce attorney was basically Cher grown up. Co-star Brittany Murphy enjoyed success in a series of rom-coms before her tragic death in 2009, but perhaps the biggest star to emerge from Clueless was Paul Rudd. He bumbled around a couple of rom-coms in the mid-to-late ’90s, before finding a home as a lovable man-child in Judd Apatow’s comedy barn. And, of course, he’s shaken his image up once again by joining Marvel Studios: transforming himself into a scarily credible hero in Ant-Man, replete with six-pack and designer stubble.

Its outrageous fashion and outmoded tech should date Clueless horrendously, but there’s charm in its pre-internet naivety. If Clueless were made today, you can bet Cher would have a Twitter following in the millions, and her own reality TV crew dutifully following her every move. In retrospect, there’s something twee and singularly compelling about her mid-’90s one-woman crusades. In 2012, Heckerling and Silverstone reunited for horror comedy Vamps, about a couple of socialite vampires (un)living in New York City, but they failed to re-capture the same lightning-in-the-bottle chemistry that made Clueless such a huge hit. That, perhaps, is sign enough that Clueless really is something special.

writer & director: Amy Heckerling (based on 'Emma' by Jane Austen)