Perhaps I was expecting too much? Then again, titling a thriller Strange but True is asking for trouble. Without giving too much away, it’s supposed to take viewers on a twisty ride that builds towards a shocking reveal and a nerve-shredding finale… and it almost fits the bill, but not quite. It walks a thin line between working brilliantly (if you don’t see the twists coming) or failing dismally if you do. There’s no middle ground and each viewer is bound to fall off that line to one side or the other.

I haven’t read the bestselling novel by New York essayist and critic John Searles. Perhaps the fault was inherent in that source material, but it seems the main problem lies with Eric Garcia’s screenplay. He’s streamlined the story by shedding anything he thought would be superfluous. That’s fair enough, but in so doing he’s left us only the scenes and dialogue that are essential to the narrative. Which means that almost every line and detail is a clue and we clearly see that the whole plot rests on a set of unlikely coincidences…

It really doesn’t take a Sherlock to figure things out as they happen. Instead of maintaining its mystery, we see the plot progress step-by-step and any enigma evaporates instantly. Key plot points are deliberately kept from us and saved for a crescendo of flashbacks at the finale. Even so, it’s essentially a join-the-dots plot with no surprises. Which defeats the whole object of the game. It suffers from ‘The Sixth Sense syndrome’, where too much about the story hinges on one major reveal, and if you see it coming in the first act the rest of the film’s wasting your time. The whole thing comes across as clumsily contrived rather than meticulously planned, relying on the stupidity of the characters and assuming its audience to be similarly stupid.

As a thriller, Strange but True isn’t well-engineered and plays out more like an episode of a TV crime drama. Which isn’t saying it’s terrible and it does have some saving graces. It’s the sophomore feature from Rowan Athale after his assured, self-penned, Britsih crime indie The Rise (2012), a.k.a. Wasteland. His strength may lie in handling actors because the cast is the redemption of Strange but True, even when they’re working with lacklustre or painfully clichéd dialogue.

The film looks good and I particularly appreciated the almost naturalistic cinematography of Stuart Bentley. He also shot The Rise for Athale but mainly works in television, most notably as director of photography on SS-GB (2017) and the fourth series Black Mirror episode “Hang the DJ“. Here he’s not afraid of shooting in low light or into high-contrast brightness, lending the film a more European arthouse feel.

I think Mark Jaworski and his art department also deserve a shout-out. The sets provide believable ‘portraits’ of each character and we’d have a fair idea of their past and current situations, even if the actors weren’t present. The environments also comment on the insular nature of their lives. Architecture and technology don’t seem to offer comfort or convenience, it’s cold, clinical, and divisive. The personal isolation is reinforced when many of the conversations, to begin with, take place over mobile phones, creating a strong physical metaphor for the emotional disjoint felt by the characters. Quite literally, there’s a distance between them.

There are some interesting subtexts running through the movie, too. The central one being a discussion of the methods we use to investigate and validate our own beliefs. Each character chooses a different path toward revealing ‘the truth’, be that scientific, academic, emotional, theological, or simply a discussion with friends and partners. Perhaps it would’ve been a better film if these subtexts had been brought to the fore? It certainly would’ve been a more interesting one. As it is, they’re merely hinted at.

Strange but True didn’t grab me from the outset. I was expecting a thriller and instead found myself watching a small examination of a dysfunctional mother-son relationship between Charlene (Amy Ryan) and Philip (Nick Robinson). Neither character is immediately likeable and they certainly don’t seem to like each other!

Amy Ryan (who’s been never shied away from difficult roles) puts in a brave portrayal of parental grief in all its bitter ugliness. Every phrase she utters is sour and calculated to hurt, to make others feel at least a small portion of her own pain. Nick Robinson, a familiar teen ‘heartthrob’ and cult favourite after appearing in Jurassic World (2015), easily holds his own opposite Ryan and both manage to give their parts enough soul that we do come round to their side as the story unfolds and the trauma they go through brings them closer.

They’re both dealing with the repercussions of an event five years earlier when Philip’s older brother, Ronnie (Conor Jessup from the upcoming Locke & Key), died tragically on his Prom Night. These wounds are reopened when Melissa (Margaret Qualley), Ronnie’s date that fateful night, turns up at their door pregnant with Ronnie’s child. Of course, she’s initially dismissed as delusional, but nobody asks the obvious questions, then or later, when she admits to having periodic blackouts. Perhaps that’s significant?

Now, the film really does take its time fleshing out its three key players and, to begin with, they all come across a bit vacuous. So, when we meet Melissa’s guardians, Gail (Blythe Danner) and Bill (Brian Cox), and we get a highly compressed portrait of them—a sweet old married couple doing up an idyllic smallholding—it’s instantly flagged up as just too good to be true! Their introduction really does save the movie, though, and things start to pick up. As one might expect, both actors turn in fine performances, adding a human complexity to what could easily have become stock characters.

I’d watch Cox in anything, and anything with Cox involved is usually worth a watch. Remember him as Hannibal Lecktor in Michael Mann’s Manhunter (1986), or from The Long Kiss Goodnight (1996), or as Inspector McDunn in Complicity (2000) and, more recently, in The Autopsy of Jane Doe (2016) which was produced by Strange but True’s writer Eric Garcia.

About 40-minutes in, things take an interesting detour. Philip goes to see a psychic called Chantrel (Allegra Fulton), whom Melissa had consulted when trying to contact Ronnie’s spirit. The scene is beautifully played, and Fulton really pulls the viewer in with a cleverly nuanced delivery, using her eyes to tell a deeper truth than the dialogue reveals. Unfortunately, this is her only scene and, much to my chagrin, the intriguing supernatural thread is pretty much jettisoned straight away.

Apart from this scene, which all too briefly seems to be taking the story in a new direction, the plot is resolutely by-the-numbers’ and, at the end of act two, we get the expected reversal and the narrative begins unravelling in a series of entangled events and flashbacks. Technically, it’s slick enough, but also predictable. The final scenes are well put-together and showcase Athale’s directorial flair for shovelling on the suspense. One saving grace is that, although I won’t say who survives, the denouement is ultimately positive.

Perhaps I’m being a little harsh here because I’d recently re-watched Nic Roeg’s classic Don’t Look Now (1973), a highly effective and affecting thriller that also dealt with grief in the aftermath of a couple losing a child. Although Strange but True skirts around similar themes (even hinting at a supernatural element), I’m afraid any comparison ends there. If you don’t second-guess the twist too early, I’m sure the ride is terrific fun, but without that shock revelation, there’s not much else left except watching a high-calibre cast going through the motions. 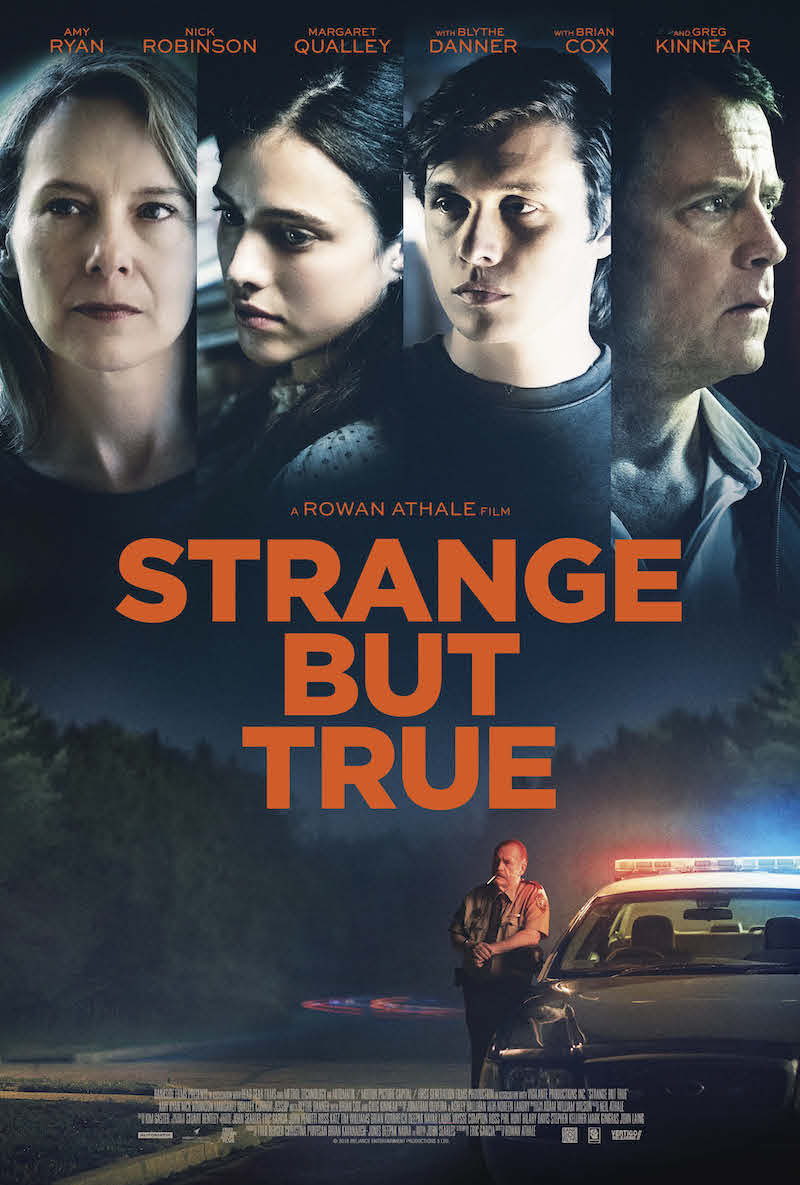