After an initial entanglement with Evelyn’s coven of witches, Sembene (Danny Sapani), Sir Malcolm’s personal bodyguard, responds to Vanessa’s query “do you believe the past can return?” with “more than that, it never leaves us.” The past has terrible consequences in season two of Penny Dreadful and previous misdemeanours and indiscretions, sins and betrayals, return to haunt them all.

Logan explores Vanessa’s occult origins in “The Nightcomers”, a superbly played two-hander between Green and guest star Patti LuPone as young Vanessa’s mentor in the dark arts, Evelyn’s sister (nicknamed the Cut-Wife by local villagers). This retelling of her initiation as the ‘little scorpion’ redefines Vanessa. She is representative of a Christian-Judeo female consciousness struggling to regain “paradise” from a cast out demon Master determined to possess her. By the showdown of “Memento Mori” she is no longer a victim possessed by demons and is strong enough to enter Evelyn’s mansion and fight for her very soul.

Logan also continues to weave detective fiction within his reworking of the Gothic genre. The scattering of table-top clues our characters use to decode this series’ Milton-esque medieval curse in “Verbis Diablo” and “Evil Spirits in Heavenly Places” replaces last season’s deconstruction of the hieroglyph-tattooed vampire. 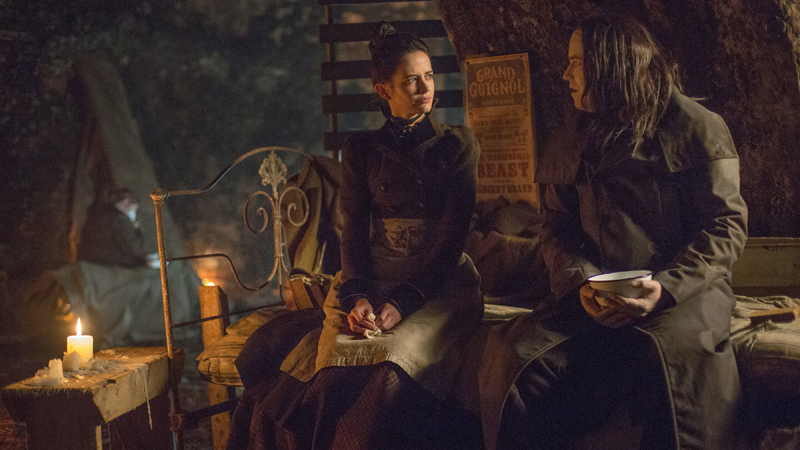 Mr. Clare, there is around me a shroud that brings only pain. I won’t allow you to suffer, not you. I think you are the most human man I have ever known.

Similarly, Ethan’s lycanthrope curse (and true identity as Ethan Lawrence Talbot acknowledging Lon Chaney’s character in the classic 1941 film The Wolf Man) finds him in the sights of the Pinkertons and of new character, Scotland Yard’s Inspector Bartholomew Rusk (the stoic Douglas Hodge). Exposed as a werewolf in last year’s dramatic climax, Ethan’s immersed further into Ripper’s London, that mythical late nineteenth-century fog-bound metropolis haunted by Sherlock Holmes, Dracula, Jekyll and Hyde and Dorian Gray. The city as character is underlined in Rusk’s investigation of the slaughter at the Mariner’s Inn and in the phantasmagoric crime scenes on display in another new location, Putney’s Family Waxworks.

Sir Malcolm Murray’s past—his disastrous African expedition resulting in the death of his son Peter, followed by his mercy killing of vampire victim and daughter Mina—also informs the present. As a way of ensnaring Vanessa, Evelyn exploits his guilt over the death of his children and estrangement from wife Gladys. The return of the repressed is his Achilles heel and, although his warm memories of Mina, Peter and wife Gladys do free him briefly from Evelyn’s influence in “Memento Mori”, she uses their deaths to trap and torment him.

In counterpoint, the sins of the father revisit Victor Frankenstein (Harry Treadaway). After constructing a female mate for his lonely “son” Caliban/John Clare (an outstanding Rory Kinnear), Victor’s desire for new creation Lily (Billie Piper) embraces abashed romance, sexual abuse, and crushing rejection. Fashioned from the corpse of consumptive prostitute Brona Croft, whose death Victor assisted, Lily is another visitor from the grave come to haunt the mortal world.

Lily evolves from Victor’s puppet (mirroring Evelyn’s control over her voodoo dolls) into a being empowered by Brona’s subconscious sexual drive. Piper confidently plays her transformation from innocent ingénue and proto-Eliza Doolittle into a scheming monster, and it allows her to ditch the unconvincing Irish accent she used for Brona last year. Lily also reinforces the Gothic’s connection with the Proustian idea of memory when a reacquaintance with Dorian Gray (Reeve Carney) triggers recollections of her sordid past. Brona’s soul lives on and, as Lily assimilates into Victorian society, she cultivates revenge for the abuse and exploitation both have suffered in the past and the present.

“Above the Vaulted Sky” concludes with a lurid ten-minute sequence where our main characters are seduced and possessed for a variety of purposes. Sir Malcolm is drugged and sexually overpowered by Evelyn after watching an opera. “I don’t know what got into me,” says Malcolm. “Must be the Wagner,” responds Evelyn (one of many great lines McCrory has this season). Simultaneously, Dorian sexually initiates transvestite partner Angelique (Jonny Beauchamp) in his vast hall of portraits, and Victor clumsily beds his creation, the cousin-daughter-whore Lily. Ethan and Vanessa’s friendship, here confined to unspoken sexual tension, becomes a relationship proper in the following episode “Little Scorpion” after they retreat from London to the isolated cottage of “The Nightcomers”. 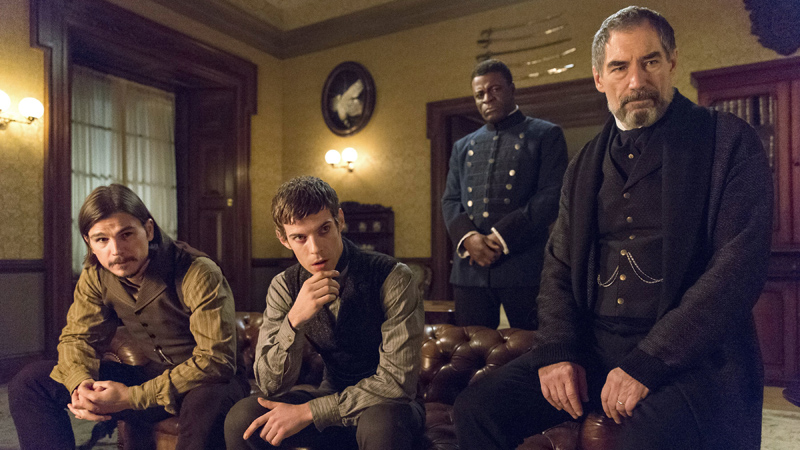 Sleep tight dear, you’re going to have a challenging day.

As a storm rages during this montage of sexual congress poor Gladys, now separated from husband Sir Malcolm, is cursed by Evelyn with visions of her dead children rising from their graves. Culminating with her suicide, the sequence is typical of Penny Dreadful’s ostentatious marriage between sexual pleasure and bloody, untimely death.

Continually trying to outdo itself, the series reflects the taboo-busting narratives of early Gothic works by Matthew Lewis, Charles Maturin, and Ann Radcliffe. In these texts, identity, power, and sexuality are subverted as social order loses its stability. Penny Dreadful connects this to monstrosity (Caliban and the waxworks, the werewolf and his victims), masculine crisis (Sir Malcolm and Victor’s failure as fathers), homosexual panic (Dorian and Angelique outraging polite society and Ferdinand Lyle’s blackmail) and the female monster-hero (Vanessa, Evelyn, Lily and the Cut-Wife).

The major theme of the Gothic double—symbolising the nature of difference, of being outside the norm, and the polarity of good and evil within a single character—also occurs throughout the series. As Ethan points out to Vanessa they battle against the forces of darkness on two fronts. They fight the demons let loose on the world but they are also in conflict with the demons lodging within them. Ethan harbours a bestial inner self, Victor’s creature is both the violent Caliban and the poetic John Clare, Dorian Gray is the immortal shade of the sinful horror trapped in a painting and Lily is the evil doppelgänger of Brona.

Evelyn and Vanessa’s magic and occultism emerge from the strange duality of Victorian England’s imperialist technological progress, and its spiritual yearning from a growing awareness of other religions, ancient civilisations, and cultures. Explorer Sir Malcolm Murray and Egyptologist Ferdinand Lyle are also analogues of exotic colonialists such as Sir Richard Burton and the young Howard Carter. 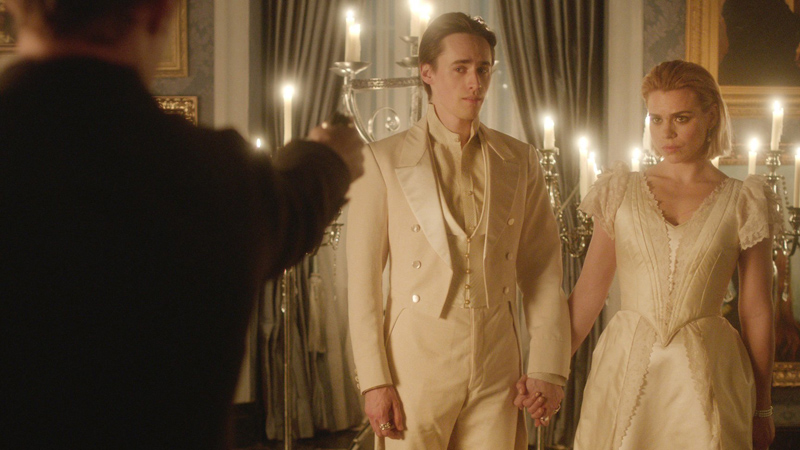 I have the strangest sense we’ve met before. Do you think that’s possible? In some other life time?

Evelyn’s voodoo doll doubles of Sir Malcolm, Gladys and Vanessa evoke an uncanny uncertainty about whether they’re dead or alive. Similarly, the mannequins in Putney’s Family Waxworks reproduce the effect of an undead past threatening reanimation. It’s ironic that Caliban is employed there. The owner, Oscar (David Haig), also aims to recreate the Mariner’s Inn crime scene as an extreme tableau vivant of “crimes plucked from the headlines”. This reflects the Victorian fascination with the spectacle of difference, grotesqueries and body doubles in freak shows, menageries and curiosities. It is a chamber of “ballyhoos” emblematic of the social and cultural extremes the characters inhabit and, unwittingly, Caliban becomes one of the very exhibits he hides amongst, the ultimate freak in Oscar’s collection by the conclusion of “And Hell Itself My Only Foe”.

Caliban’s relationship with Oscar’s blind daughter Octavia overturns several iconic scenes in Universal’s Frankenstein (1931) and Bride of Frankenstein (1935). In the former the creature mistakenly kills a young girl and in the latter he befriends a blind old man. The seemingly sympathetic Octavia (Ruth Gemmell) is the real monster, exposing Caliban’s human vulnerability beneath his immortal flesh.

Talking of the bride of Frankenstein herself, Penny Dreadful also reconfigures the camp, hissing, fright-wigged harpy of James Whale’s horror comedy. Like her predecessor, Lily rejects her husband but at the end of “And Hell Itself My Only Foe” she shares with Caliban her desire to usurp mortal society with a new race of immortal offspring. It is Caliban who rejects her.

Immortality, transgression, revenge, redemption and the psychic costs visited upon Victor and Sir Malcolm in particular, those guilty fathers harangued by their undead next of kin in Evelyn’s mansion, dominate the finale “And They Were Enemies”. However, its hurried, anti-climactic confrontation between Vanessa, Evelyn and the demon Master claiming her soul, where the werewolf Ethan fulfils the season’s ‘lupus dei’ prophecy, is supplanted by the break up the Penny Dreadful “family”. 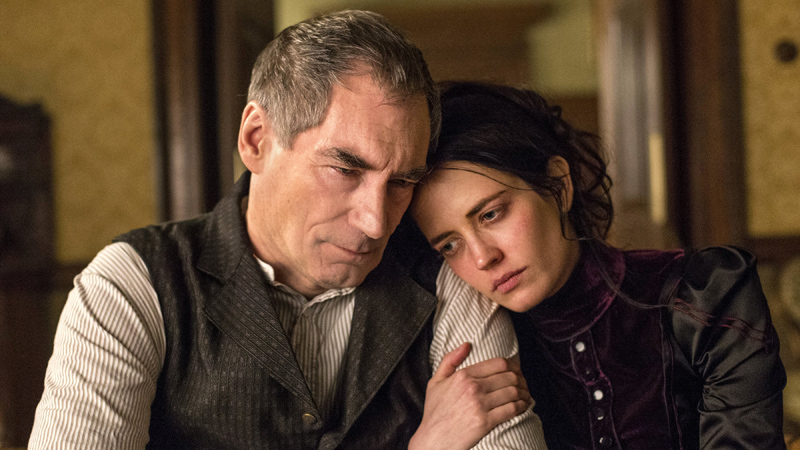 So we walk alone.

Sir Malcolm escorts the deceased Sembene to his African grave. Caliban destroys the Putneys and their plans for him as “king of the freaks”. He atones by heading to the icy wastes of his desolate shore (shades of the framing narrative in Mary Shelley’s novel). Lyle guns down Evelyn’s witches with the best quip of the series (“Never underestimate the power of a queen with lovely hair, my dear”), comforts Victor and then returns to his closet, concealing “that tribe into which I was born”. After he fails to shoot the scheming immortals Lily and Dorian, touting for position as next season’s adversaries, Victor is reduced to being a junkie in his empty laboratory.

Ethan Talbot confesses to Inspector Rusk and is extradited to America, leaving Vanessa alone in Sir Malcolm’s mansion. Again, Logan underlines the cost of the battle to Vanessa. After absorbing the scorpion in Evelyn’s mansion, Vanessa burns her crucifix in her fireplace, suggesting that good and evil still grapple for reconciliation within her.

Logan bookends the close of the season with another quietly powerful scene between Vanessa and Caliban/John Clare. Back in “Verbis Diablo” he defined for Vanessa the amoral universe of the pagan as apposed to the moral one of the Christian and, in the finale, reassures her that God is still waiting for her. Penny Dreadful still asserts there is faith in virtue as Vanessa claims of the monstrous Caliban, “I think you are the most human man I have ever known.”

Penny Dreadful supplements its rich themes and martyr-complex characters with production design and photography dripping with Gothic decadence. It’s probably one of the best-looking shows on television, and composer Abel Korzeniowski matches the spectacle and intimacy with an evocative set of musical motifs and themes.

John Logan effectively builds upon the first season’s foundations, developing characters such as Ethan and Ferdinand, while providing a good antagonist in the form of insidious Evelyn Poole. He even manages to bring immortal Dorian into the centre of the narrative by teaming him up with undead Lily. Even if the queue stretches from here to Hackney, I can’t wait to witness more of Penny Dreadful’s ballyhoos.