When The X-Files returned to TV in 2016 (eight years after X-Files: I Want to Believe, fourteen years since it was cancelled on Fox), the world was a very different place and the adventures of a middle-aged Mulder (David Duchovny) and Scully (Gillian Anderson) felt outmoded. It was certainly fun to see these characters again, and there was mild interest in seeing how the show would adapt to the modern age, but those six episodes were mostly a washout.

It didn’t help that creator Chris Carter bookended season 10 with ‘mythology’ stories that were often impenetrable to the majority of viewers who stopped watching The X-Files after Duchovny left, and Carter made the insulting decision to reveal the alien conspiracy fans had dutifully followed since 1993 was itself a cover story for a different conspiracy.

There’s finding new depths to a rabbit hole, and there’s just being jerked around… 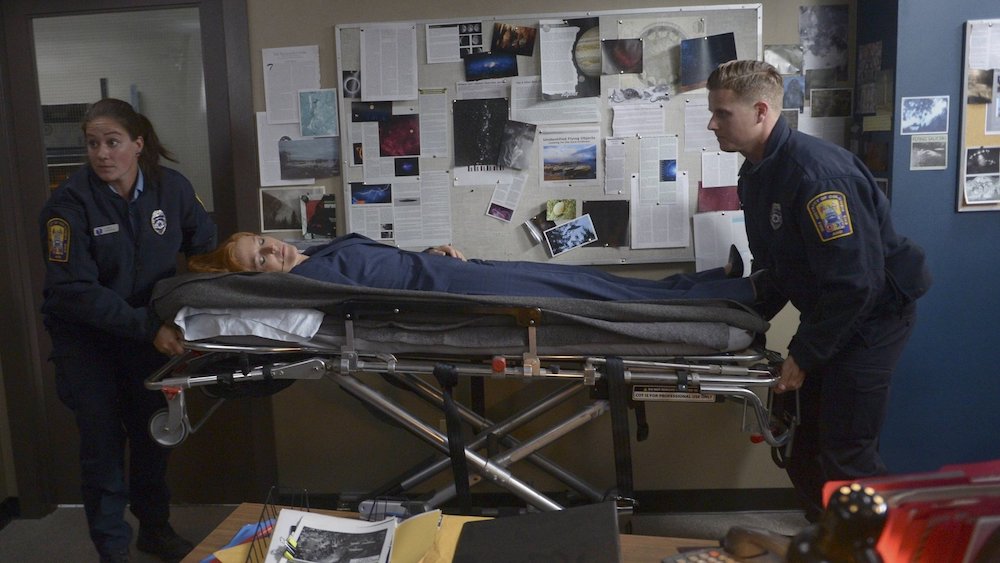 Season 10 was heavily criticised by all but the most committed of X-Philes, with only Darin Morgan’s “Mulder and Scully Meet the Were-Monster” capturing some of the old magic — which was itself an unproduced script for a different show, that Morgan adapted to fit the characters.

The finale, “My Struggle II” appears to jump the shark with a doomsday scenario being played out on a relatively small budget, with the arch nemesis Cigarette Smoking Man (William B. Davis) removing his cheek and nose, Mulder contracting a deadly disease, the human race poised for extinction by alien plague, and Scully witnessing an alien craft hovering above her in downtown Washington D.C. In 1995, maybe this would have elevated my heartbeat, but it just felt like desperation to inject some drama into a show where, frankly, there’s a vague sense Anderson and Duchovny are phoning it in.

“My Struggle III” continues the story, opening with a narrated flashback to explain the Smoking Man’s backstory and point of view on the world, mirroring Mulder’s narration from last season. The struggle clearly has two sides, with a fun reveal that CSM helped fake the Moon Landing of 1969, just one of many ways he shaped the course of the human history. The episode itself was clearer than the previous two “Struggle” instalments, and my early misgivings gave way to acceptance that Carter used this hour to try and rectify what went wrong last time. 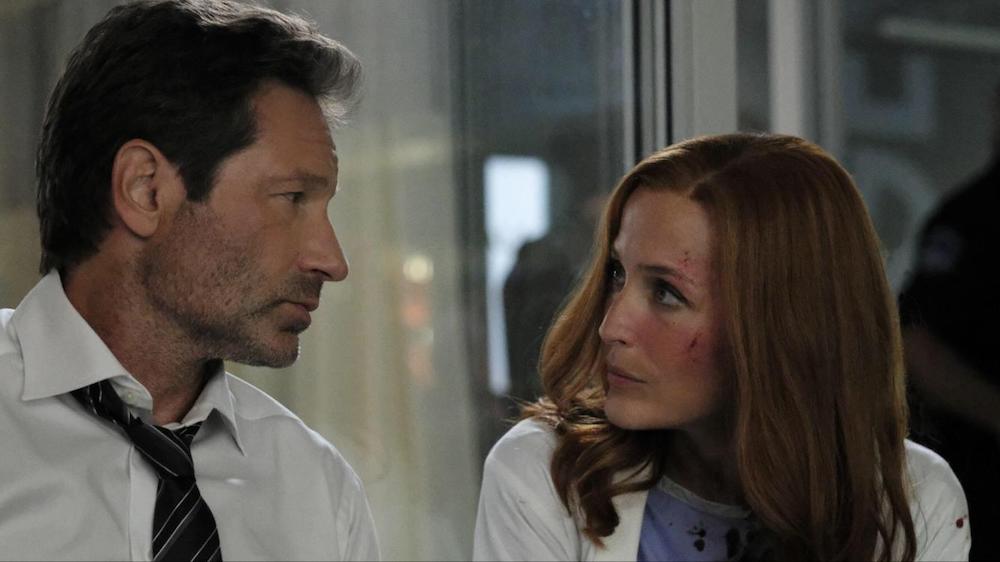 It was a terrible start, however, with the events of “My Struggle” hand-waved away as Dana’s hallucinations, as she was introduced being rushed to hospital with anomalous brain readings (flashing Morse Code, bizarrely). Mulder was therefore in rude health, the Smoking Man’s features were intact, there was no sign of any deadly contagion on the streets of the capital, and Scully hadn’t been abducted by aliens… again. It made a mockery of the apocalyptic events “My Struggle II” treated very seriously, but considering that hour was a terrible waste of everyone’s time, I was very relieved.

“My Struggle III” was a better hour of TV, but still not anywhere near as sharp and intoxicating as The X-Files used to be in its day. I just can’t get excited by its mythology now, and it’s a pity Chris Carter seems to believe that arc was the backbone of the show. While that was arguably true for awhile in the mid-1990s, everyone knows the standalone episodes where Mulder and Scully investigated the paranormal is where audience affections lies. Sadly, the FBI’s finest aren’t being allowed to spend their retirement as consultants, travelling around the country scrutinising urban myths and UFO sightings from rednecks. 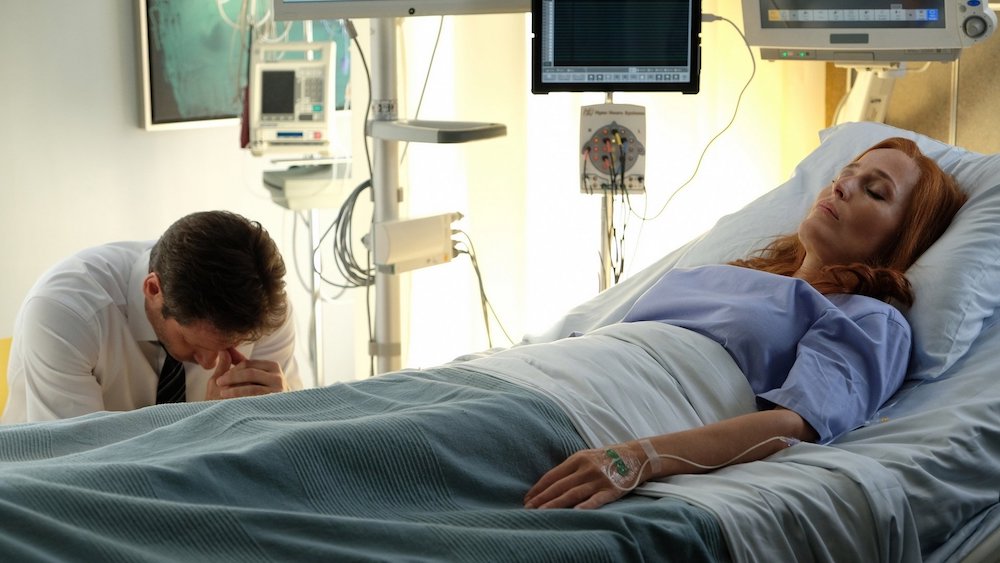 Still, while this hour was clogged with monologues and irritating voiceovers, it ultimately found some focus and a direction I’m more interested in than anything last season presented. Smoking Man does intend to release a deadly plague on the population of the world, which he engineered using alien DNA, and Mulder and Scully’s son William holds the key to stopping it with his otherworldly stem cells, but the story wisely steps back from the brink…

It was more about setting up how the forces of good and evil are aligned, once we realise Monica Reyes (Annabeth Gish) is in cahoots with CSM, and Skinner (Mitch Pileggi) may be tempted to turn his back on his friends and the human race to be granted immunity from the pathogen. There’s even a rival faction to CMS, in the mysterious ‘Mr. Y’ (A.C Peterson) and his associate Erika Price (Barbara Hershey). And while I don’t want to give away the episode’s big twist regarding William, let’s just say I heartily approve of that direction and how it makes sense of some scenes in season 7’s “En Ami”. 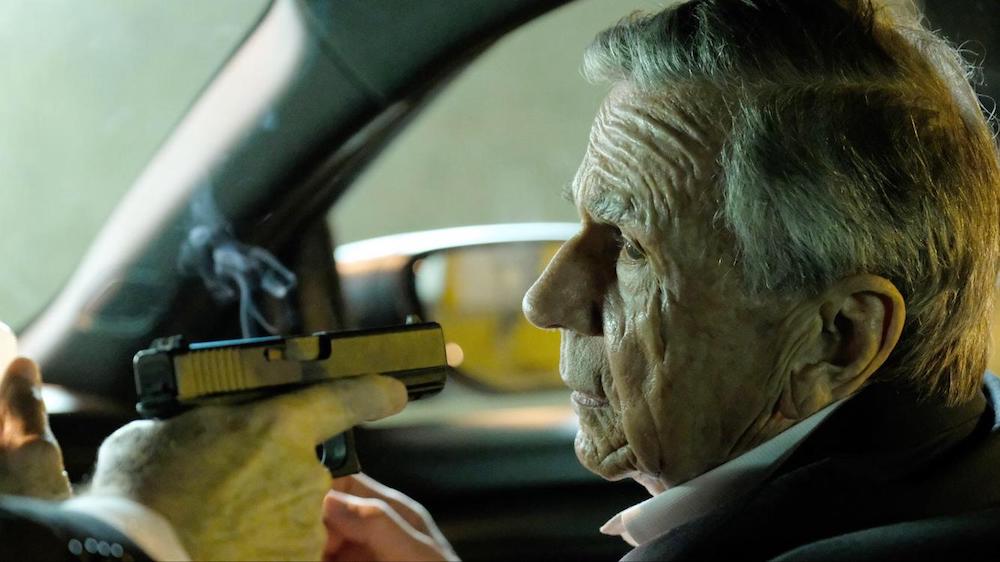 Season 11 will contain less mythology episodes than before, which is wonderful news, but there’s at least a feeling from “My Struggle III” that Chris Carter’s listened to criticism and is doing what he can to undo some of season 10’s biggest problems. The X-Files was a product of its time and it’ll never recapture its youthful spark, when it had mainstream success and inspired countless knockoffs, but the least we can hope for is a worthwhile send-off.

The news this week that Gillian Anderson is definitely leaving the series that made her name suggests The X-Files is about to be put to rest. Nobody wants to see the iconic Mulder and Scully partnership go lopsided again, but we’ll see. Those  younger Federal gents, Einstein (Lauren Ambrose) and Miller (Robbie Amell), are still floating around the periphery of scenes, looking for all the world like Anderson and Duchovny’s understudies just waiting to get their stage call…