Darin Morgan may not be a household name, but he’s a writer every X-Phile knows. The younger brother of writer-producer Glen Morgan, Darin got his start on The X-Files hidden behind layers of latex, playing the sewer-dwelling ‘Flukeman’ creature from season 2’s “The Host”. He then helped develop the episode “Blood” with his brother, which led to him writing his own instalment of the show: fan-favourite “Humbug” about a community of circus freaks, which stood out because of its dark, tongue-in-cheek sense of humour. His next assignment was season 3’s “Clyde Bruckman’s Final Repose”, an instant classic that earned Darin an Emmy award.

The rest is history, as Darin turned in two more offbeat gems (“War of the Coprophages”, “Jose Chung’s ‘From Outer Space'”) that cemented his reputation. But just as his popularity was at its peak, he left after the third season along with his brother—only returning to play shape-shifter Eddie Van Blundht in Vince Gilligan’s “Small Potatoes”, an amusing hour very attuned to Darin’s legacy. 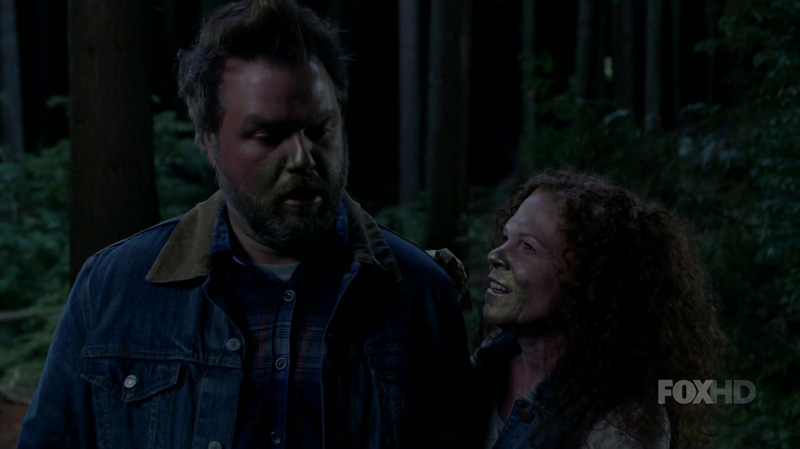 Since we’ve been away, much of the unexplained has been explained.—Mulder

I can’t overlook the two episodes Darin wrote for Chris Carter’s other ’90s series, Millennium (“Jose Chung’s ‘Doomsday Defence'”, “Somehow, Satan Got Behind Me”), but since then it’s safe to say he’s practically disappeared from most people’s thoughts. Notoriously self-critical, it seems he can only be persuaded by his brother to sit down and write something—preferring to instead make a living as a consulting/supervising producer (Fringe, Bionic Woman, his brother’s cancelled 2014 series Intruders).

However, there was a moment during production of 2005’s The Night Stalker (ABC’s remake of the 70’s supernatural drama and X-Files antecedent), when Darin Morgan wrote a script called “The ‘M’ Word”—which was very much in the style of his award-winning X-Files hits. Unfortunately, the show was swiftly cancelled and Darin’s screenplay was one of two left unproduced—although it was made available as bonus material on the Night Stalker DVD. 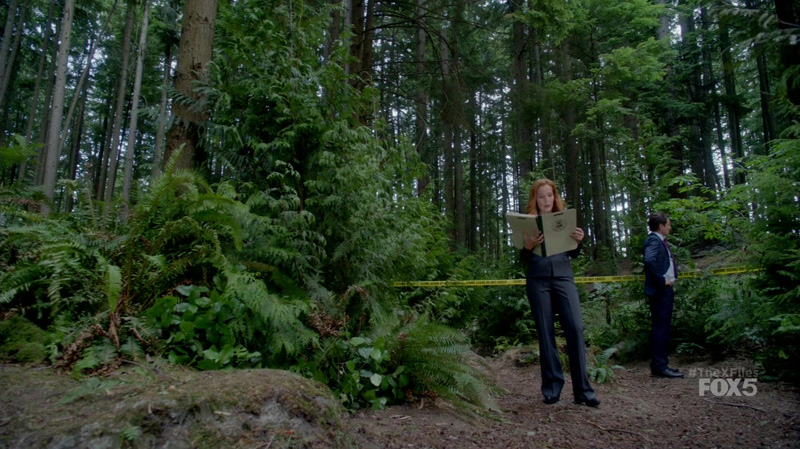 Notice they didn’t get a picture of it, which is odd, since everyone has a camera on them these days.—Scully

The reason I bring this up? Well, having now seen “Mulder and Scully Meet the Were-Monster”, and having previously read “The ‘M’ Word” back in 2006, it’s clear Darin has recycled his unmade Night Stalker script a decade later. I don’t mean that as a criticism—it just tickles me that Darin’s infamously languid output hasn’t resulted in a wholly fresh idea for so very long. Luckily, The Night Stalker and The X-Files were very similar, and “Mulder & Scully Meet the Were-Monster” is possibly the closest thing we’ll get to a ‘lost episode’ from the mid-’90s. And if a keen sense of nostalgia is why you’re watching X-Files right now (along with the surprise millions on Fox), it’s hard to imagine anyone being disappointed by a new Darin Morgan story.

We’re on very familiar ground with this hour, which only betrayed its Night Stalker origins in the sense it was clearly written for a solo investigator—a position taken by Mulder (David Duchovny), meaning Scully (Gillian Anderson) was kept to the edge of matters. I didn’t mind that, because it’s surely not the first time this has happened in one of Darin’s X-Files scripts (their ratio of screen time was similar to “War of the Coprophages”), and he clearly finds Mulder the more amusing of the two, although Scully had a memorable fantasy sequence where she played seductress. 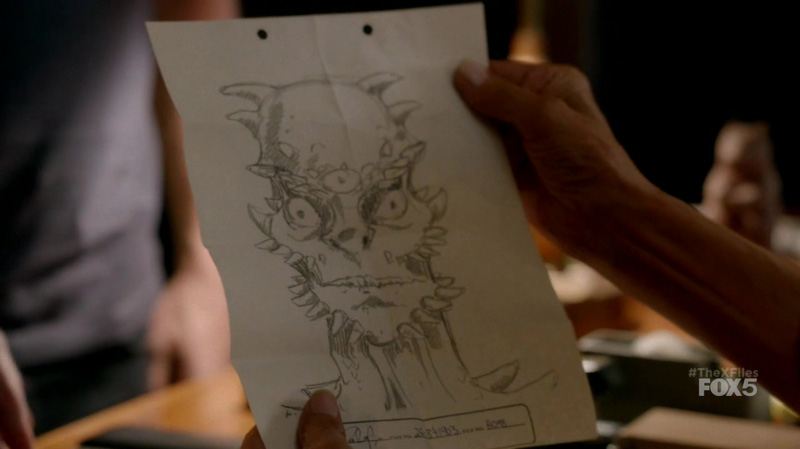 Mulder and Scully were called in to investigate a dead body found in a forest, which two eyewitnesses (untrustworthy stoners) claim is the handiwork of a three-eyed, horned beast that screamed at them before fleeing into the trees. Mulder, in a welcome tweak to his character for today’s audience, is healthily dubious about claims the murderer is a literal monster, while Scully’s less arch about her skeptical nature, and at one point admits she’s having fun trying to piece together what actually happened.

Warning: spoilers for the episode contained below. 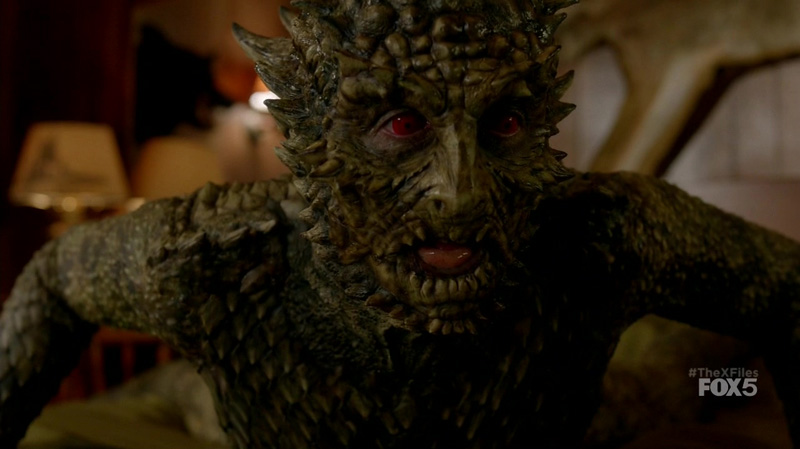 Of course, a monster is to blame for the crime. (Well, a monster was involved…) It’s impossible to properly review “M&SMTWM” without giving away its big twist, but it turns out the “Were-Monster” is a creative reversal of werewolf lore. In this instance, a genuine horned creature that squirts blood from its eyes was the victim of a human attack, receiving a nasty bite from a man that caused it to transform into… an ordinary middle-aged schlub, who named himself ‘Guy Mann’ (Rhys Darby) and set about trying to satiate his primordial desire: to get a job as a smartphone salesman.

A great deal hung on this reveal of the unbelievable truth of the monster’s identity, which Guy Mann himself explained to Mulder using extensive flashbacks and narration that put a weird angle on preceding events. 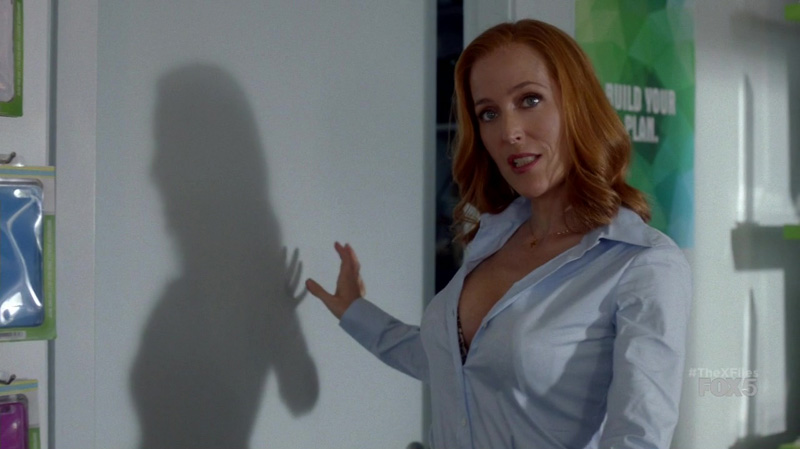 The twist was certainly amusing and cleverly handled (although it didn’t surprise me, having read the original Night Stalker screenplay), and this hour was overall a fine throwback to the oddball flavour of Darin Morgan at his best. I particularly loved the episode’s slightly kooky cinematography by Joel Ransom, who gave everything the feel of a larger-than-life horror comic from the 1970s.

“M&SMTWM” didn’t feel as fresh and exciting to me as it might’ve done in 1995—because a lot’s happened in 20-years, and many other TV shows have since done ‘offbeat’ hours in Darin’s spirit—but it was a welcome return to form for an event series struggling to justify its return. Duchovny, in particular, seemed more engaged by the inherent charm of this story—presumably eager not to deflate the whole endeavour, aware of Darin’s glistening reputation in fan circles. 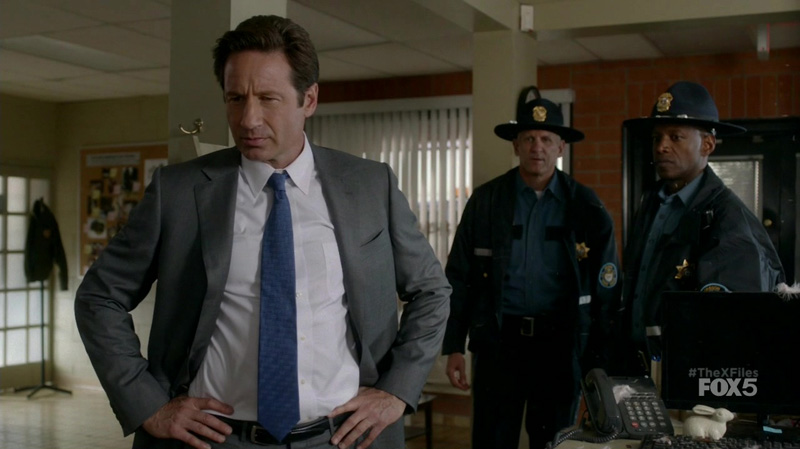 Rhys Darby (Flight of the Conchords) was also the perfect choice for the role of likeable Guy Mann, bringing just enough pathos and ludicrousness to the part of a forest-dwelling lizard creature blessed/cursed with human form and consciousness. And there was also a fun role for comedian Kumail Nanjiani (a self-confessed X-Phile and host of a popular podcast on the series, now starring alongside his TV heroes). The story’s theme of transformation was also nicely echoed by the appearance of transgender comedian/drag queen D.J ‘Shangella’ Pierce as a woman assaulted by the were-monster, and the weird visual of Fox Mulder sticking his face into a taxidermied fox’s eyeholes to peer into a motel room.

It remains to be seen if we’ll ultimately think fondly of The X-Files’s six-part revival, but at the very least it’s given us another effortlessly witty Darin Morgan tale to laugh along with, which I’m more than happy about.