James Wan’s Insidious (2010) left an indelible mark on modern horror. Its style, aesthetic, and camerawork has influenced many filmmakers, together with Wan’s own The Conjuring (2013). This unfortunately makes it difficult to differentiate between many haunted house movies of the past decade, but particularly those two franchises Wan helped launch.

It also doesn’t help that Patrick Wilson appears in two instalments of both Insidious and The Conjuring. One can be forgiven for starting Insidious: The Last Key and forgetting which movie’s universe we’re in. Hint: it’s the one where Lin Shaye’s the connective tissue between movies, not Vera Farmiga, and there are psychic trips into a limbo realm.

Just don’t ask me to remember what happened in Insidious: Chapter 3 without consulting Wikipedia, sorry. But this fourth Insidious works as the second prequel for parapsychologist Elise Rainier (Lin Shaye), following the first two instalments focusing on the Lambert family and their possessed son Dalton.

I appreciate how these last few Insidious’s have enabled a 71-year-old veteran ‘scream queen’ to take the lead of a modern mainstream horror franchise. The Last Key even became the most profitable of them all, grossing $167 million worldwide, despite having no big stars involved to draw a crowd. If you thought Dermot Mulroney was a step down from Patrick Wilson last time, here we get straight-to-video ‘that guys’ Josh Stewart and Kirk Acevedo. Oh, and Bruce Davison.

However, while the The Last Key’s profits guaranteed a fifth instalment, creatively this saga’s ability to chill appears spent…

The opening sequence, set in New Mexico, 1954, reveals the childhood history of Elise. She grew up with her little brother Christian (Pierce Pope), both subjected to physical abuse from their alcoholic prison executioner father Gerald (Stewart). Their mother Audrey (Tessa Ferrer) was unable to protect them from her mean-spirited husband, and matters were complicated because psychic Elise is a beacon for otherworldly entities her dad doesn’t believe in. It all ends rather badly for the Rainier family, without spoiling things, and in 2010 a now-elderly Elise is drawn back to her family home when the current occupant requests her help exorcising a ghost…

The Last Key is, literally, a story about Elise confronting the ghosts of her past that still haunt her nightmares. And that includes an entity representing the fear and guilt Elise felt towards her father as a girl, credited as “Keyface” (who has five fingers resembling keys, confusingly).

There’s a solid story to flesh out some distinctly average scares, but you have to wait over an hour before the emotional arc starts to connect. For the most part, The Last Key is just another jump-scare delivery system, replicating the look and feel of what James Wan started. A few well-timed armchair jolts can be fun to experience in the dark, but they’re only memorable when there’s enough anticipation and engagement in the characters and their predicaments.

That’s not often the case in this sequel, unfortunately. It feels like reheated ideas writer-actor Leigh Whannell had while brainstorming the other movies. Whannell directed the previous sequel himself (having written all four), but now he’s stepped aside and only appears as his ghost-hunting character Specs. Maybe he realised there’s not much here to get excited about directing.

Instead, Adam Robitel steps behind the camera. He wrote the abysmal Paranormal Activity: The Ghost Dimension (2015) after his promising directorial debut with found footage horror The Taking of Deborah Logan (2014). This movie’s certainly in Robitel’s wheelhouse, but he doesn’t do much to push the franchise anywhere fresh or exciting.

Robitel shouldn’t shoulder too much of the blame, however, because the overarching feeling of The Last Key is how we’ve seen it all before. The idea of a haunted house movie becoming a ‘haunted person’ movie, with the twist of mediums entering a creepy astral plane to communicate with ghosts was an engaging twist three movies ago. Now it just offers tedious scenes of characters walking around half-empty rooms, ankle high in dry ice.

The jump-scares do work occasionally, but when doesn’t a loud noise provoke a reaction in a quiet room? Genuine scares that unsettle your soul are harder to construct and execute. The Last Key is happy to rake over old ground for its frights, like the go-to of having a demon suddenly appear behind someone’s shoulder once the camera cuts back to them during an exchange of dialogue. The Conjuring 2 and Annabelle: Creation (2017) may have faced some criticism, but at least both contained memorable set-pieces that had you gripping your seat.

The Last Key has ‘Chekov’s whistle’ and a boogieman who looks like a Walking Dead cosplayer who got lost in the woods for a year. 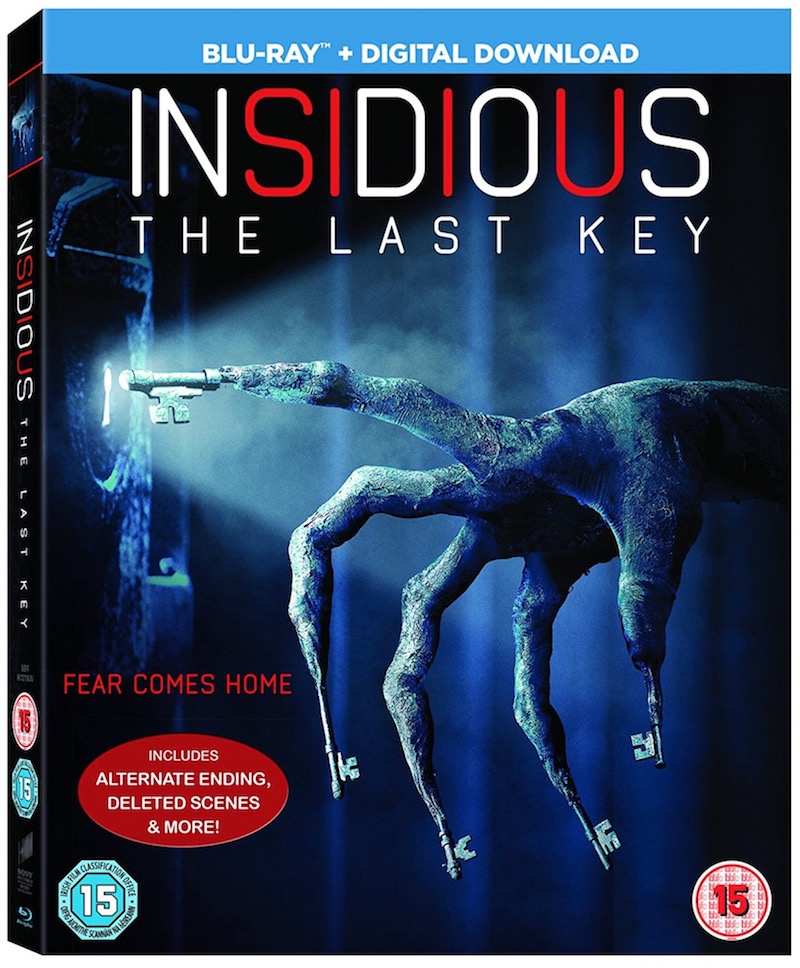 A digitally shot movie, Insidious: The Last Key boasts a good transfer on 1080p Blu-ray, but there are noticeable issues with banding in some of the darker scenes. Colours and whites are vibrant enough, with good detailing in the image, but considering the majority of this movie takes place in the dark… things tend to look washed out. The DTS-HD Master Audio 5.1 mix is more impressive, presenting some good sound design and meaty bass to sell the jump-scares. It’s not exactly demo material, but the sound is responsible for most of what works about the movie’s scares and atmospherics.