Having been teased during season 1’s finale, in “Akane no Mai” we finally enter Shogun World, with far greater emphasis on story and characterisation than usual. A different location and fresh faces gave this episode a renewed sense of discovery, although I couldn’t shake a concern Westworld has opened up a new frontier when it should be focusing on the one we’ve invested the most time in.

The flashbacks haven’t always been easy to follow this year, but there was less flitting around in the timeline during this hour. The present day only featured in the opening with Bernard (Jeffrey Wright) inside the Delos control centre, watching Karl Strand’s (Gustaf Skarsgård) security team retrieve drowned host bodies from the flooded reservoir they’re draining.

It’s the aftermath of a terrible massacre Bernard feels uncomfortable being around (as we know he blames himself for whatever happened), but the puzzle piece of most interest was Strand being informed that a third of the hosts pulled out of the water didn’t have any programming. How could those hosts function without any coding? Were they being controlled by a more powerful entity elsewhere, essentially under a kind of remote control? 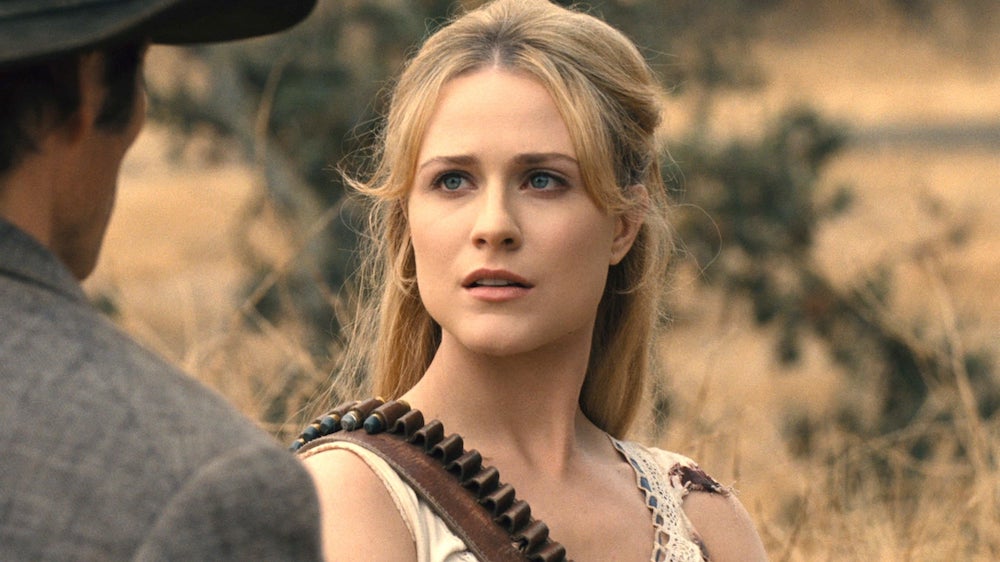 Where we go, we go eyes open. Together.—Teddy.

In flashback to before the reservoir massacre, Dolores (Evan Rachel Wood) and Teddy (James Marsden) returned to their hometown of Sweetwater… only to find a scene of mass slaughter themselves. Then Dolores ordered the town’s broken locomotive be repaired, as it’s the best way for them to travel directly to the park’s control centre.

The fact Teddy spared Craddock’s life a few episodes ago is also returned to, as Dolores decides his sense of decency is a liability. After recounting a story about how her father dealt with the outbreak of an infection in their herd (he burned the weakest animals to spare the rest), it became clear that Dolores thinks Teddy lacks the balls to do bad for the greater good. And so, against his will, Teddy has his personality changed to better suit what Dolores needs in a lieutenant. Next week’s episode should be interesting if sweet Teddy’s suddenly going to behaving like a ‘black hat’, and knowing he ends up drowned in the reservoir suggests his new personality could be a hindrance to his survival… 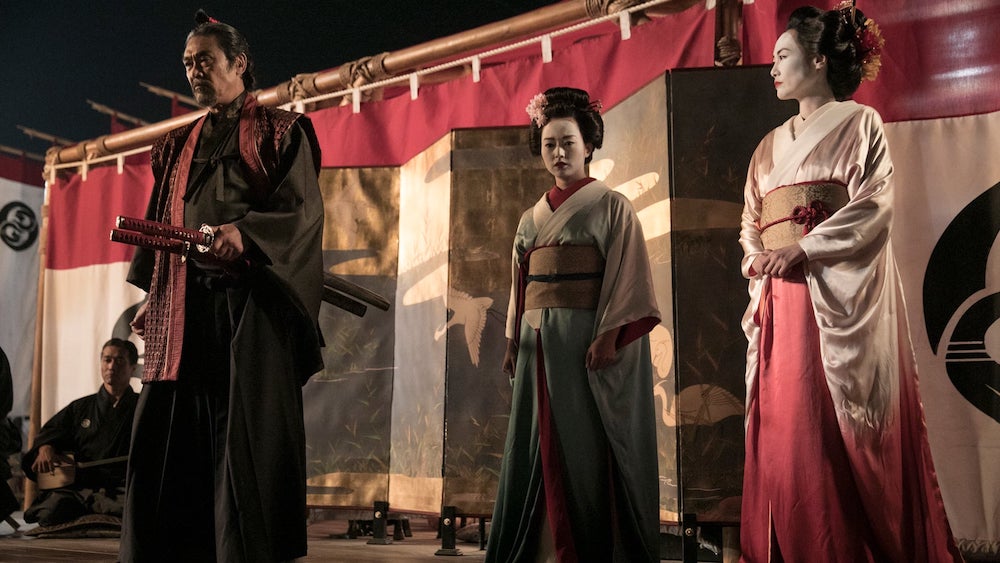 I told you, I found a new voice. Now we use it.—Maeve.

The majority of “Akane no Mai” (Japanese for “Akane’s dance”) was dedicated to Maeve’s (Thandie Newton) storyline; a character who’s been somewhat overshadowed this season. Maeve, Hector (Rodrigo Santoro), and Lee Sizemore (Simon Quarterman) were captured by a ronin named Misashi (Hiroyuki Sanada) and his men, then escorted to a village to meet other people they soon realise are their “duplicates”.

Sizemore’s laziness resulted in him taking shortcuts in his work, so many of Shogun World’s characters are just variations on Westworld personas transposed onto Japan’s Edo period. And they’re even following recycled narratives, as an action sequence echoing the choreography of Hector’s Mariposa heist demonstrated. Also, I loved the cover of The Rolling Stones’ “Paint it Black”, which continued this season’s tendency for composer Ramin Djawadi to give pop classics a thematic twist. It was also used for last season’s Mariposa sequence.

This twist gave the episode some emotional heft by the end, as Maeve forged a close bond with geisha Akane (Rinko Kikuchi), recognising they’re essentially the same person. Although Akane’s daughter, Sakura (Kiki Sukezane), isn’t missing like Maeve’s. Ultimately, Maeve’s posse become participants in the village’s narrative, after Akane murders an emissary of a local shogun (Masaru Shinozuka) and this triggers a ninja attack. Maeve, Akane and Sizemore then had to disguise themselves as Chinese diplomats to get closer to the bloodthirsty shogun (whom it’s revealed is malfunctioning), after Sakura is kidnapped. 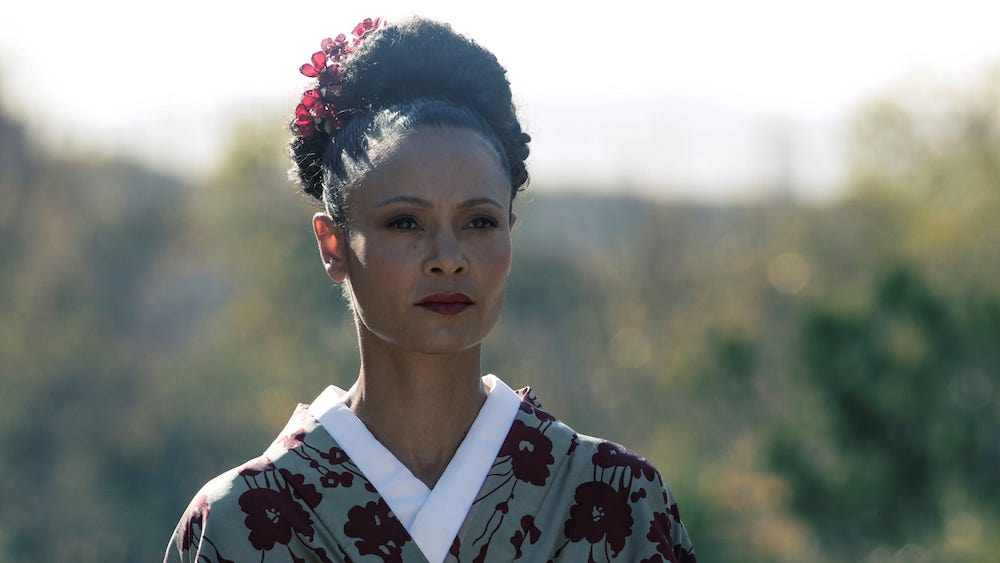 I wasn’t entirely sold on “Akane no Mai” for awhile, as it seemed too unrelated to the core story we’ve been following. I’m still in two-minds about Westworld having other themed parks to visit, even if there’s a precedent for that in Michael Crichton’s original film. It just feels like something that might happen in later seasons, when things are getting stale.

However, things did come together by the end, as the storyline furthered the idea Maeve is special and developing unexpected abilities as her consciousness evolves. How is another mystery! We’ve already seen her issue verbal command for others hosts to do her bidding, but now it seems she can impose her will simply on hosts by thinking. It’s something Sizemore certainly can’t explain (a kind of wireless host-to-host connection that rewrites code?), and makes Maeve a very powerful presence. The episode ends with the murdered shogun’s troops rushing the camp, but the suggestion is Maeve can now tell them to stand down and could perhaps recruit them to her own cause.

This is certainly very interesting stuff, but I hope it’s not going to make things too easy for Maeve. She’s almost becoming a version of Neo from The Matrix, and we all know how that film’s sequels struggled to present challenges for a character whose powers are so extensive. If Maeve can telepathically control hosts, I have big concerns. Surely the writers need to set some boundaries? Like, maybe it takes considerably effort and can’t be done en masse? Or it only works when she’s under great emotional stress? Maeve was about to be killed both times she managed to pull off this trick, so perhaps that’s the case… 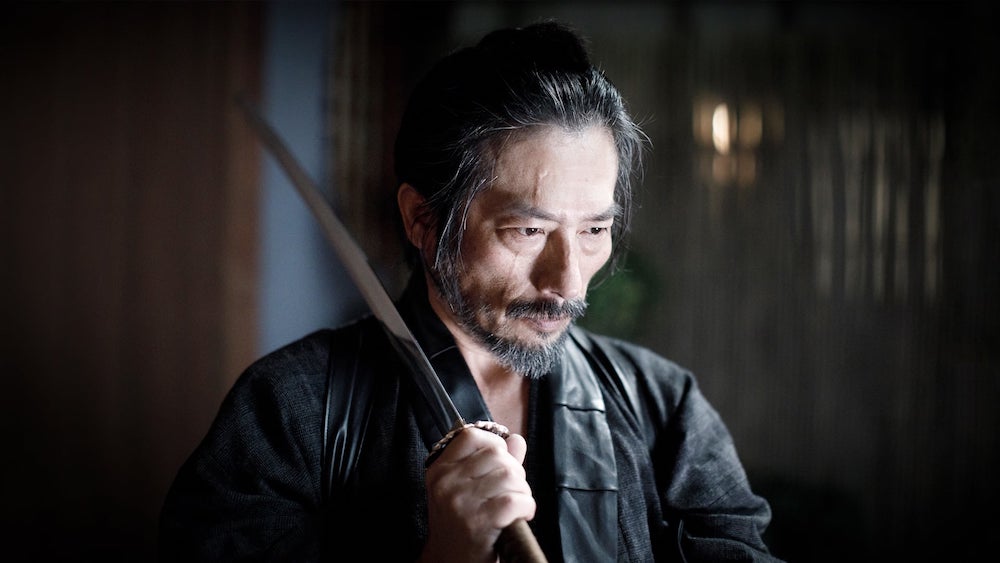 Having a whole episode telling the story of Akane wasn’t a big waste of time, or a mid-season distraction. It did a good job making us note the differences between Maeve and Dolores in terms of how they’re orchestrating their differing mutinies.

There’s a moment when Maeve tries to “awaken” Arkane using her new powers, only to face unexpected resistance from Arkane herself, who appears to send what’s happening to her mind but stops her enlightenment.… and Maeve sees the positive of ignorance. Dolores, however, has no patience or understanding for other people, even those she professes to love like Teddy. He’s already awakened and shares the same free will, but Dolores is happy to adapt Teddy’s personality in order to get what she wants. Or what she thinks she needs him to be. And that almost makes her as bad as her human creators, doesn’t it?

If Maeve and Dolores are on a violent collision course this season, right now I’m backing Maeve to win. The former brothel madam seems to be evolving and learning with every passing moment, but also shows empathy and respect to others. Her treatment of Sizemore even seems to have gone from outright hostile to almost playful ear-bending at times. Dolores, on the other hand, is perhaps just playing her bad-ass “Wyatt” persona, and maybe isn’t as advanced as we’re being led to believe? 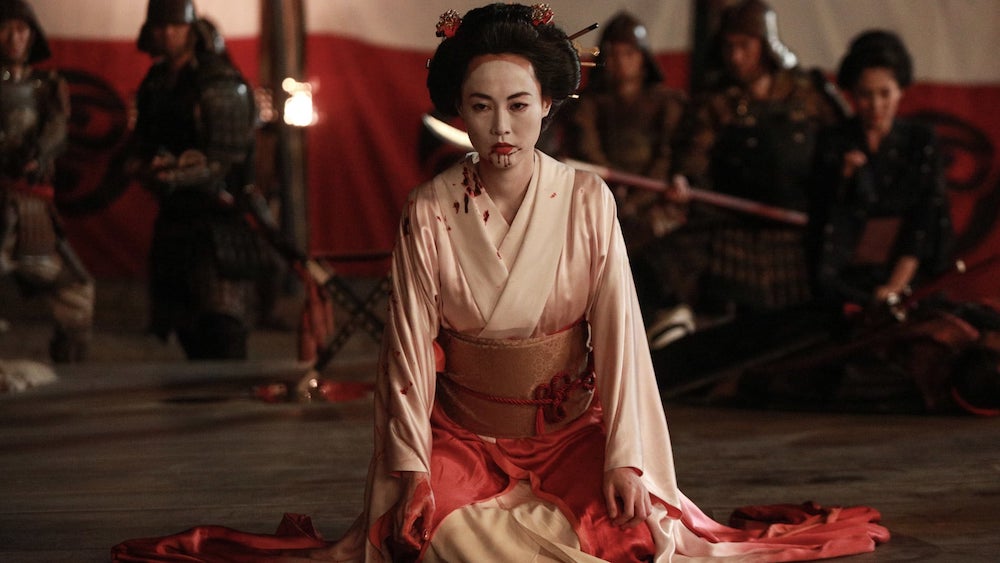 An episode spending most of its time outside the Westworld locale, with characters we’ve never met before, who might not even be important going forward, was always going to cause conflicting thoughts. I can’t say I’m thrilled we’ve been taken such a big step into Shogun World (as it dilutes the importance of Westworld in some respects), but “Akane no Mai” managed to make the change of scenery work. One could imagine Maeve simply took a boat across the Pacific, and seeing her interact with an alternate version of herself was intriguing. It also meant the writers had some meta-fun with the show, calling to attention how characters and storylines are often borrowed from other sources. This series itself is based on an old movie, of course.

They also assembled an impressive cast of supporting players, even if some of them are very overused on US TV. Hiroyuki Sanada seems to be Hollywood’s first choice if you need a wise/solemn/intelligent Japanese man, having performed a similar function in Lost, Helix, Extant, Life, etc. I didn’t immediately recognise the other actors because of the geisha makeup and costumes, but Rinko Kikuchi is known for playing Mako Mori in Pacific Rim (2013), you might remember Kiki Sukezane as Miko Otomo in the Heroes Reborn miniseries (2015–16), Tao Okamoto starred in The Wolverine (2013), and did you spot “New Clementine” was played by Lili Simmons from Banshee (2013–16)?

It was nice to get a rare self-contained story, as this almost put you in the position of being a “guest” in the park… following the twists and turns along with Maeve, Hector, and Sizemore. And with enough of the episode focused on their unexpected trip to Shogun World (a park created for hardcore guests who think Westworld is too tame), it resulted in a climax one felt emotionally invested in because of the time spent with Akane, Maeve, and Sakura. The moment Akane avenged her daughter’s brutal death was graphic and unpleasant, but in a very cathartic way.

I’m suddenly interested in what Maeve’s up to again, for the first time this year.