As Hannibal has always been at its best when it walks a fine line between high art and pulp, any episode that references both Francis Bacon’s ‘Study after Velázquez’s Portrait of Pope Innocent X’ and John Woo’s Face/Off is bound to be a good one. “Digestivo” didn’t disappoint. Anyone who has read the book Hannibal (which the first half of season 3 has followed quite faithfully, in a chronologically roundabout way) knew that this episode, which begins with Hannibal Lecter (Mads Mikkelsen) and Will Graham (Hugh Dancy) captured by corrupt Italian police working for Mason Verger (Joe Anderson), was going to be a crazy one. Writers Steve Lightfoot and Bryan Fuller lived up to the grislier bits of Harris’ novel while even coming up with a few new ones. At the same time, they brought the story arc of the first season to an emotionally satisfying resolution, because if there’s one thing Hannibal has plenty of, it’s heart.

As expected, the episode begins by filling us in on the details of Hannibal and Will’s capture, allowing for the Bacon-inspired shot of a screaming Jack Crawford (Laurence Fishbone) and Hannibal-as-stag from Will’s broken-mirror point of view—an image I’m sure is now safely tucked away in my unconscious, waiting to play a cameo role in one of my nightmares. After Jack is saved from a grisly fate by Chiyoh (Tao Okamoto)—who, I must admit, mostly exists as a convenient plot device when needed at this point—we join Will and Hannibal at Muskrat Farm, where they’re invited to dinner with a gleeful Mason, who prattles on like a Bond villain (only much creepier) about his plans to eat the doctor while wearing Will’s face. I must say, Anderson particularly nailed the bit where he’s assuring Hannibal that he won’t overcook his penis.

Mikkelsen and Dancy are both great here, expressing a great deal with their faces and body language in an episode where they have little dialogue for much of the first half. It feels like exactly the right choice for the character to have Hannibal silently, calmly absorbing what must be excruciating pain as he’s branded and tortured by Cordell (Glenn Fleshler). When Cordell describes how he’ll prepare and cook Hannibal’s various body parts, the doctor exclaims, “You’ve thought of everything!”—the two men are like chefs swapping notes, and Hannibal seems genuinely impressed by, say, the simple, elegant way that Cordell is going to prepare his tongue. And when Will takes a bite out of Cordell’s cheek, the look of genuine pride on Hannibal’s face is priceless.

As events escalate in the second half of “Digestivo”, the slow burn of the season’s first gave way to an episode that’s as grotesque and strangely kinky as the show’s ever been. The image of a shirtless Hannibal bound in a stall was unmistakably sensual, and the shot that dollied in on Lecter, after freeing himself (with Alana Bloom’s help), rising like an avenging angel… well, it should keep Tumblr busy for a while. Bryan Fuller has often cited David Lynch as an influence on the show’s aesthetic, and at its best, Hannibal has some of Lynch’s talent for framing the horrific in a way that makes it oddly beautiful. That was apparent in what was, for me, the most disturbing moment in the show’s history, when Margot (Katharine Isabelle) discovers the “surrogate”—a sow from the Verger farm—that Mason’s used to incubate the now-stillborn baby still inside the pig when Alana (Caroline Dhavernas) and Margot discover it. The sequence juxtaposing Alana removing the baby from the sow, with Hannibal carefully peeling off Mason’s face, was at once repulsive and shot so artfully that I couldn’t look away even as I wanted to. 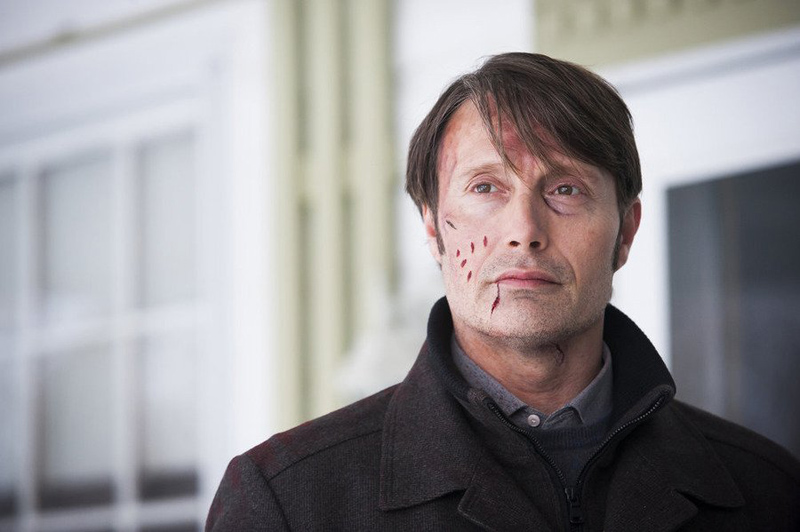 The character of Margot might be the biggest improvement over Harris’ novels. In the book, she’s a bodybuilder who, Harris unsubtly implies, might have become a butch lesbian and, possibly, a trans man as a reaction to her brother’s sexual abuse. Harris is a gifted writer in many ways, but his understanding of the LGBT community leaves a lot to be desired. Fuller has smartly taken the core idea of Margot having been born into the living hell of having Mason as a brother and, largely thanks to Isabelle’s great, moving interpretation of the character, has turned Margot’s revenge subplot into something much more credible. The episode belongs to Margot and Alana as much as Hannibal and Will, and their grisly final scene with Mason is undeniably satisfying.

(Sidenote: This episode featured face removal, a Caesarian section involving a human baby and a pig surrogate, a close-up of a vial of semen, a discussion of how said semen was procured via cattle prod, and an eel swimming into Mason Verger’s mouth and eating him from within… but a nude painting was blurred out, because NBC’s Standards and Practices department is more sinister and depraved than we can possibly comprehend.)

After being safely returned to his home—and boy, did I love the image of Hannibal carrying Will like a groom taking his new bride across the threshold—Will is finally able to look Hannibal in the eyes and say that he’s getting over him. The scene is perfectly played by both actors, and it’s gratifying to see Will asserting his independence, and Hannibal as the vulnerable one for once. It’s Will’s insistence that he’s ready to let go that motivates Hannibal to surrender to Jack Crawford at the episode’s end. This may seem an odd choice, given that Hannibal was prepared to eat Will’s brains a few days earlier…. but it makes perfect sense given the dynamic of their relationship—Will tells Hannibal he doesn’t want to know where to find him, and so Hannibal makes sure that he’ll always know exactly where he is. Exes, am I right?