Writer-director David Schmoeller’s career got off to a great start when he interned with Peter Hyams on classic conspiracy thriller Capricorn One (1977). His own feature film debut, Tourist Trap (1979), drew positive comments from Stephen King and, with its animated murderous mannequins, prefigures many aspects of his best-known and most successful film to date, Puppet Master (1989), which spawned a ten-film franchise. Between his debut and the first of the Puppet Master films, Schmoeller made the two most interesting films of his career: Crawlspace (1986), a twisted psycho-thriller starring Klaus Kinski as the murderously perverted son of a Nazi scientist, and Catacombs (1988)…

The first 10-minutes deliver everything you could possibly want from an exorcism: a 16th-century monastery, a possessed monk (perfectly played by Bret Porter and one of my favourite cinematic demons), a cross that burns the lips when kissed, a blessed cross-shaped dagger, another cross turned into serpents, medieval dungeons, searing holy water… 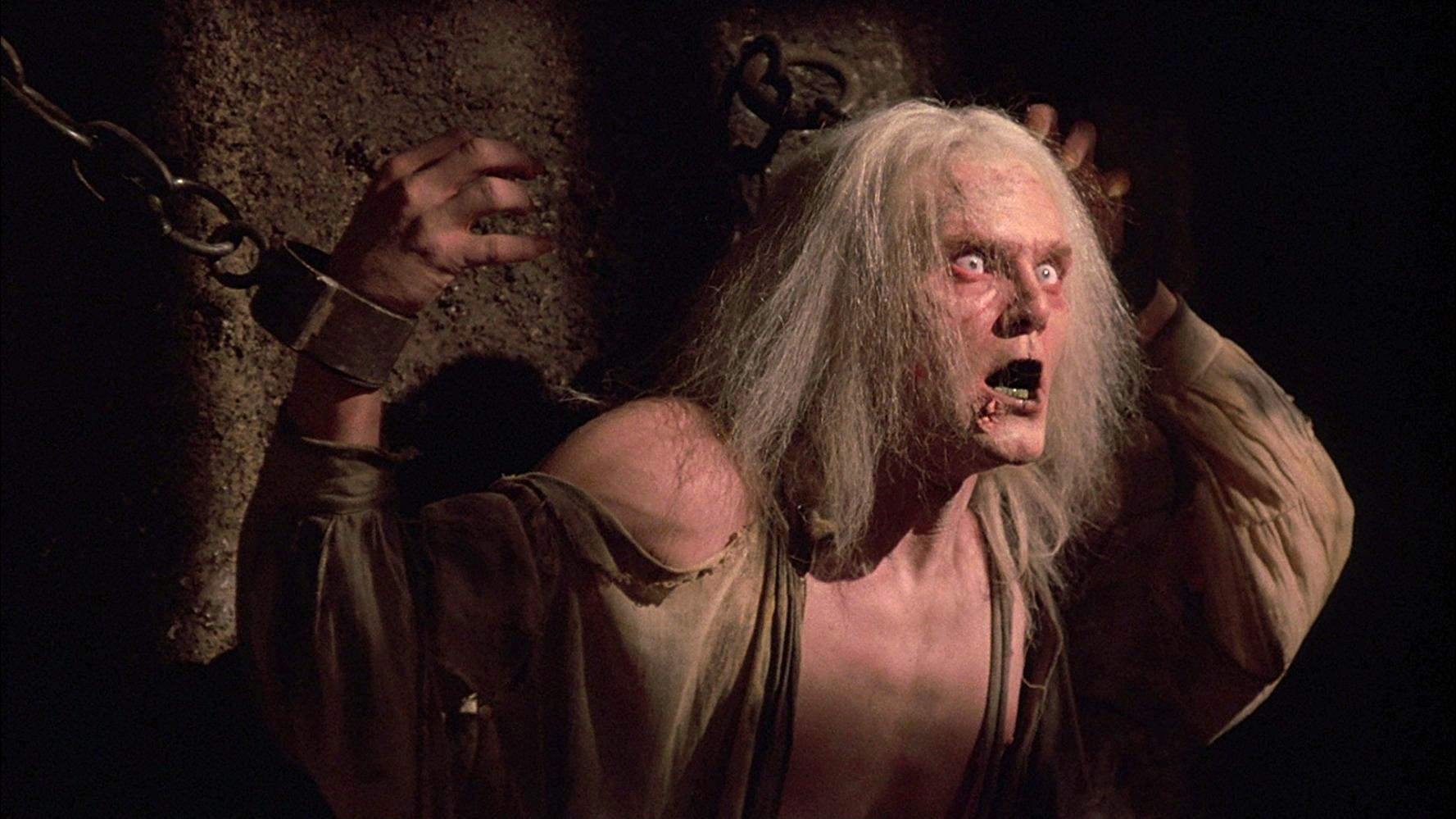 There’s much moaning and screaming but also gleeful chuckles from the demon, as it easily gains the upper hand over the Inquisitor (Nicola Morelli) who has no choice but to entomb the evil with the aid of a big holy seal. It’s a sort of ‘out-of-sight, out-of-mind’ solution, and as the story jumps forward nearly five centuries to ‘Present Day’, we’re obviously in for an encore.

Catacombs promises everything one expects from classic Italian Horror in the style of Bava, Fulci, and Argento. Perhaps one of the reasons Catacombs is so often overlooked, underrated, or simply ignored, is because the rest of the film doesn’t deliver what one expects. Whilst completely missing the point, many reviewers dismiss it as a cheesy 1980s B Movie, comparing it to the stalk-and-slash coda of its contemporaries, and bemoaning its lack of visceral gore and restrained body count. Instead, what we have is an intelligent and surprisingly sensitive story with a beautifully crafted script. But don’t worry, the horror elements are equally well-handled—some subtle and psychological, some superbly startling. It has more in common with The Name of The Rose (1986), than it does with Demons (1985), but the themes and overlapping iconography make it a great double-bill with The Church (1989), although it has a very different approach. 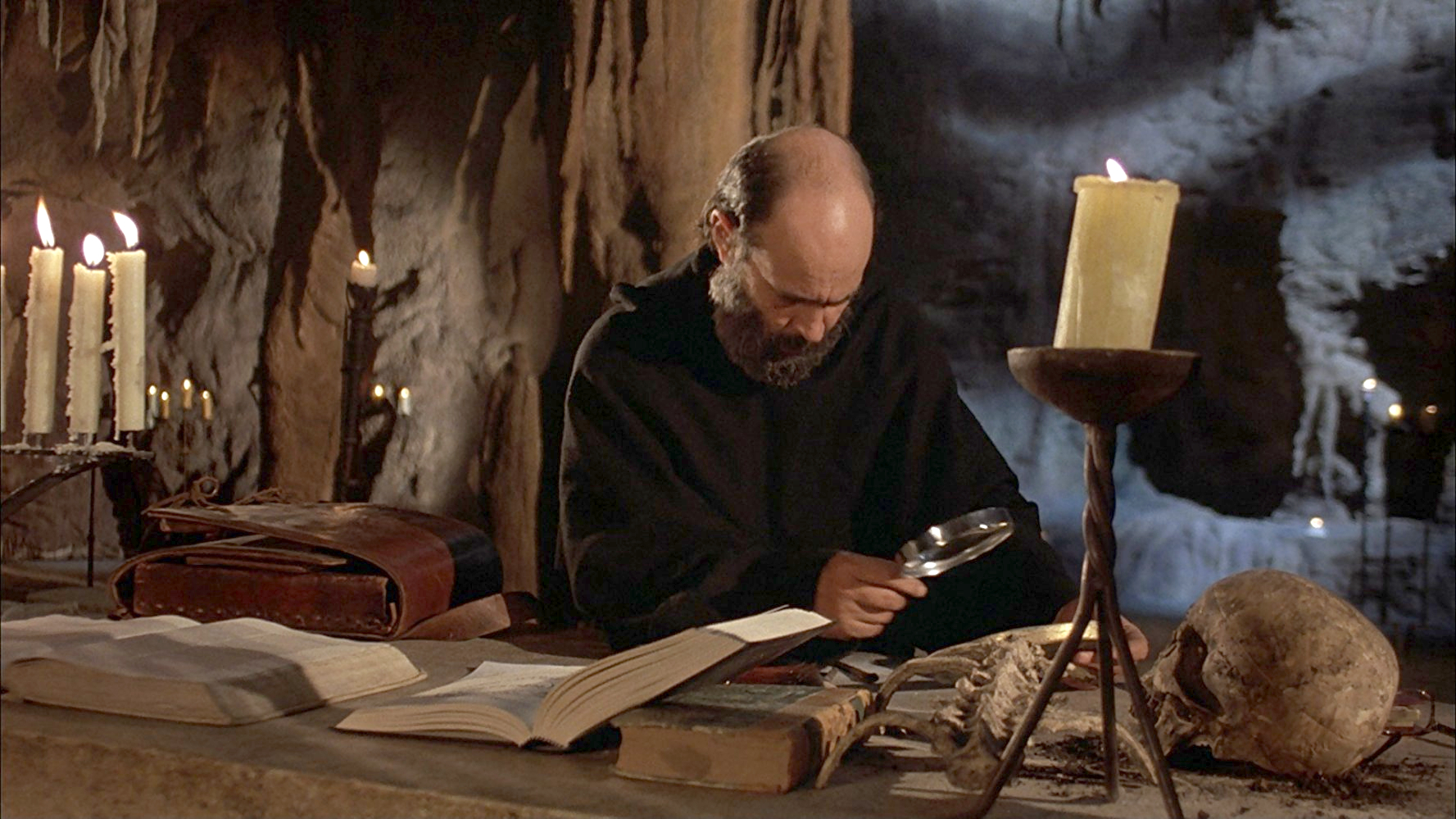 The arrival of Elizabeth (Laura Schaefer), a young, beautiful—and what’s more, female—American teacher on a research visit, reminded me of Barbara Stanwyck’s arrival at the residence of several bachelor professors in Ball of Fire (1942). And she has a similar enchanting effect over the monks. It seems the mere presence of a woman within monastery walls is enough to reawaken the curse. Her appearance is marked by a seismic shift that splits the masonry deep in the catacombs to reveal an ancient seal. At the same moment, Elizabeth is afflicted with a nosebleed… oh yes, there’s Freudian symbolism a-plenty!

The only other notable female character in this necessarily masculine cast is Antonia (Mapi Galán), a young ‘innocent’ with powers of premonition. This an early role in a long career that has oscillated between schlock horror, derided exploitation and respected art films. Here she’s fresh from Ruggero Deodato’s giallo Phantom of Death (1988). 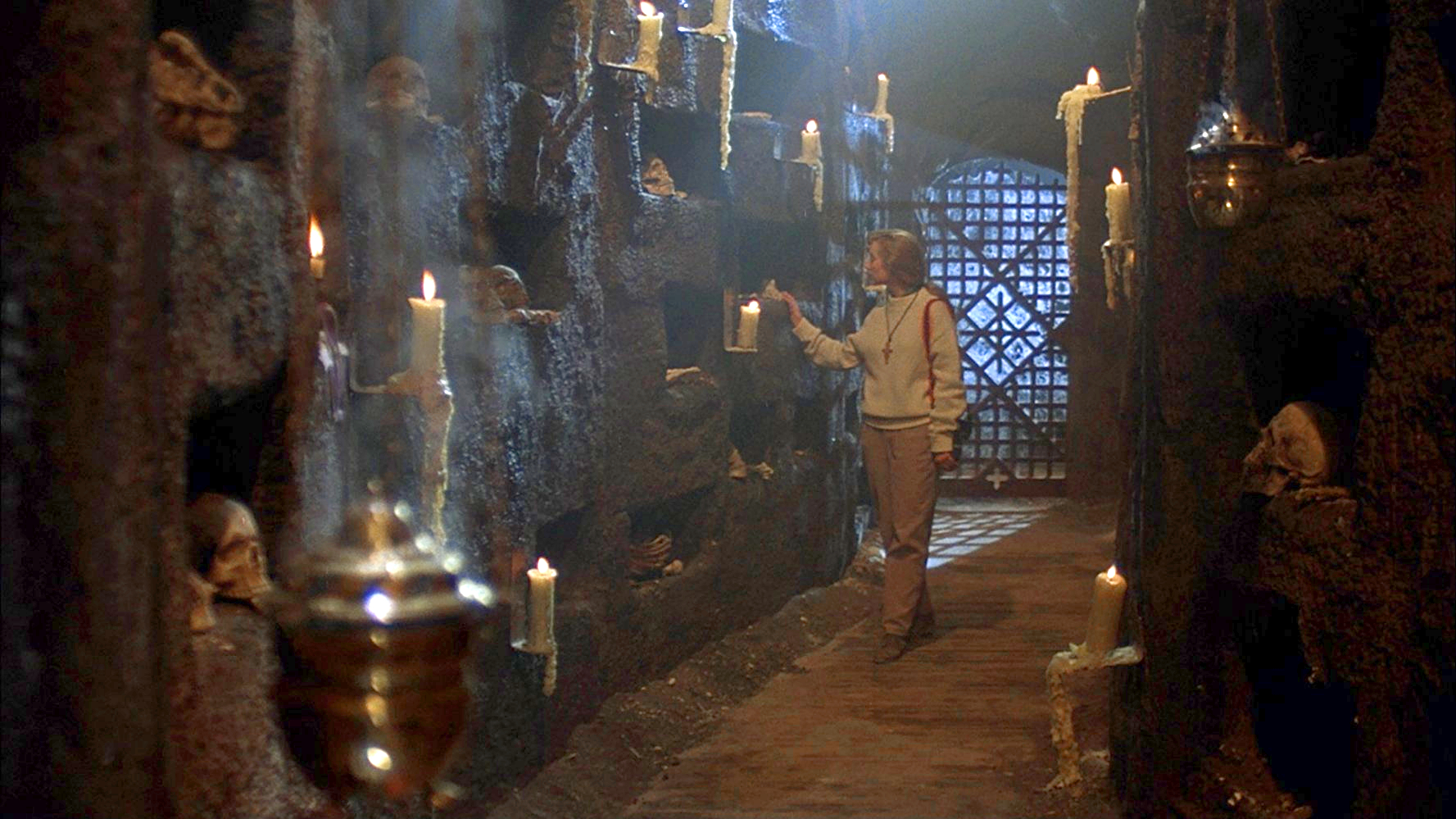 Like the house in Robert Wise’s The Haunting (1963), the crumbling abbey itself is symbolic of the body. Its walls representing the physicality of flesh and bone, the rooms within are its mind, the various emotions personified by the cast of characters that inhabit them, and underlying all this are the catacombs of the subconscious where powerful desires lie deeply buried. This metaphor is particularly well-suited here as the biological term ‘cell’ was coined by Robert Hooke who, in 1665, first observed the body’s biological ‘building-blocks’ and named them after the small rooms in a monastery.

There’s a fine balance between gentle humour and serious philosophical debate, and a definite subtext concerned with examining the animal instincts that drive the human condition—their potential to delight if embraced or destroy when denied. It’s this struggle that causes Father John Durham (Timothy Van Patten) to question his faith. Van Patten is well cast as the fresh-faced, thoughtful young priest, though shortly after Catacombs he concentrated on his career as a director which has gone from strength-to-strength and includes the first two episodes of Game of Thrones, 18 episodes of Boardwalk Empire, and more recently Black Mirror’s “Hang the DJ” instalment. To help Father Durham with his crisis of faith, the Brother Superior, Orsini (Ian Abercrombie) has assigned him to be a ‘carer’ to the order’s oldest and perhaps wisest member, Brother Terrel (Feodor Chaliapin Jr). 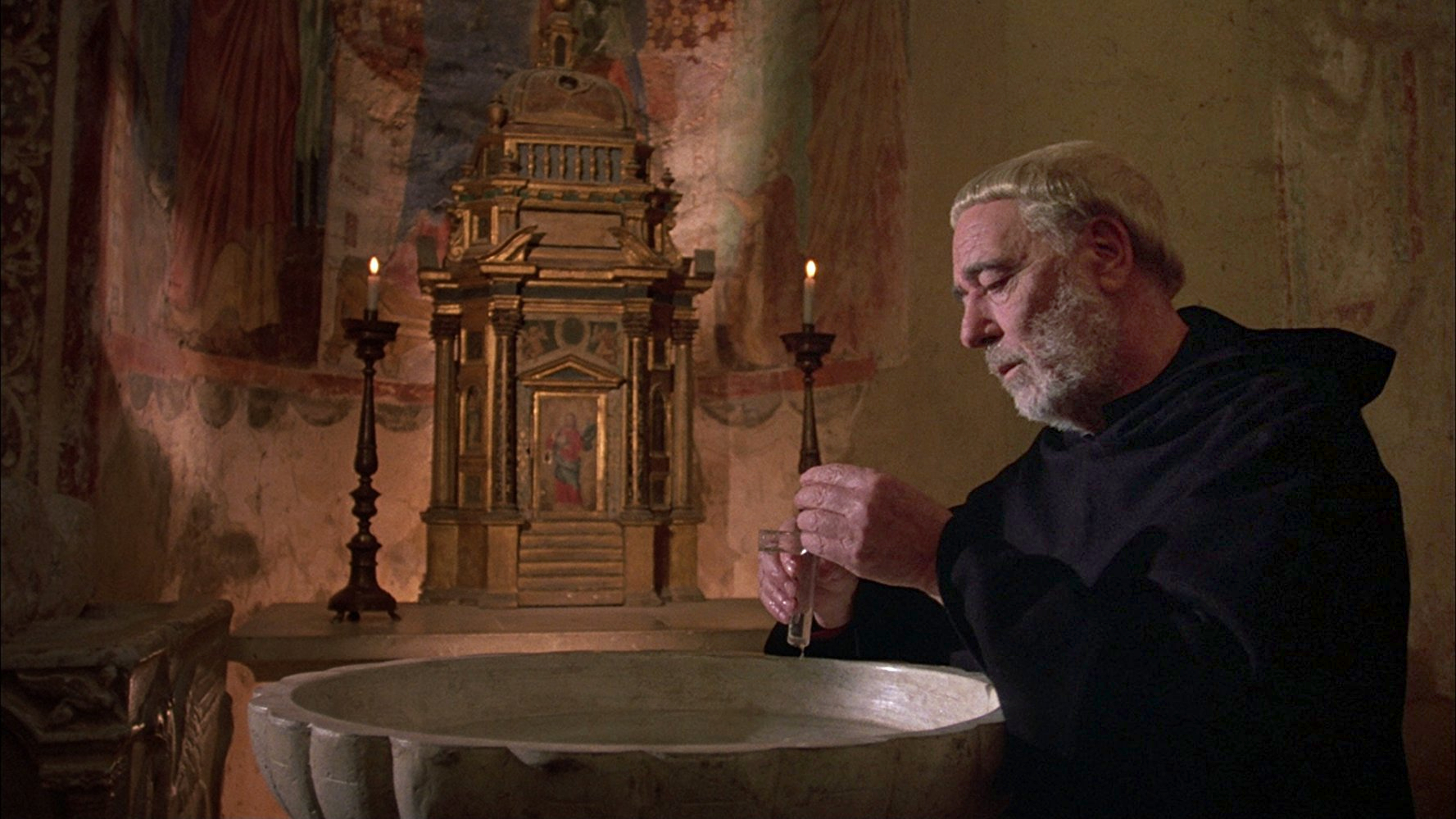 There was a time when it seemed that every old man in European films was played by Feodor Chaliapin Jr.—the ‘junior’ becoming increasingly ironic. He started acting back in the mid-1920s, with his first role of note in For Whom the Bell Tolls (1943). That same year, he also began a string of roles that would make him a genre fan-favourite with a small part in the film The Seventh Victim (1943), a noir-horror involving satanic shenanigans in Greenwich Village. Later in his career he can be spotted as the occult architect Varelli in Dario Argento’s Inferno (1980), and the accursed Bishop in The Church (1989), a collaboration between Dario Argento and director Michele Soavi. Probably his most memorable part was the dour monk who hates laughter in The Name of The Rose (1986).

Although still an aging monk, his Catacombs character, Brother Terrel, couldn’t be more different. On his deathbed throughout the film, he’s gentle and loveable. His measured speech about young love and the pleasures of the flesh he has denied himself is sensitive, poignant, laced with humane humour and very memorable. Just one example of how Schmoeller’s solid script really ties everything together and inspires some brilliant performances of a subtlety all too rare in horror. 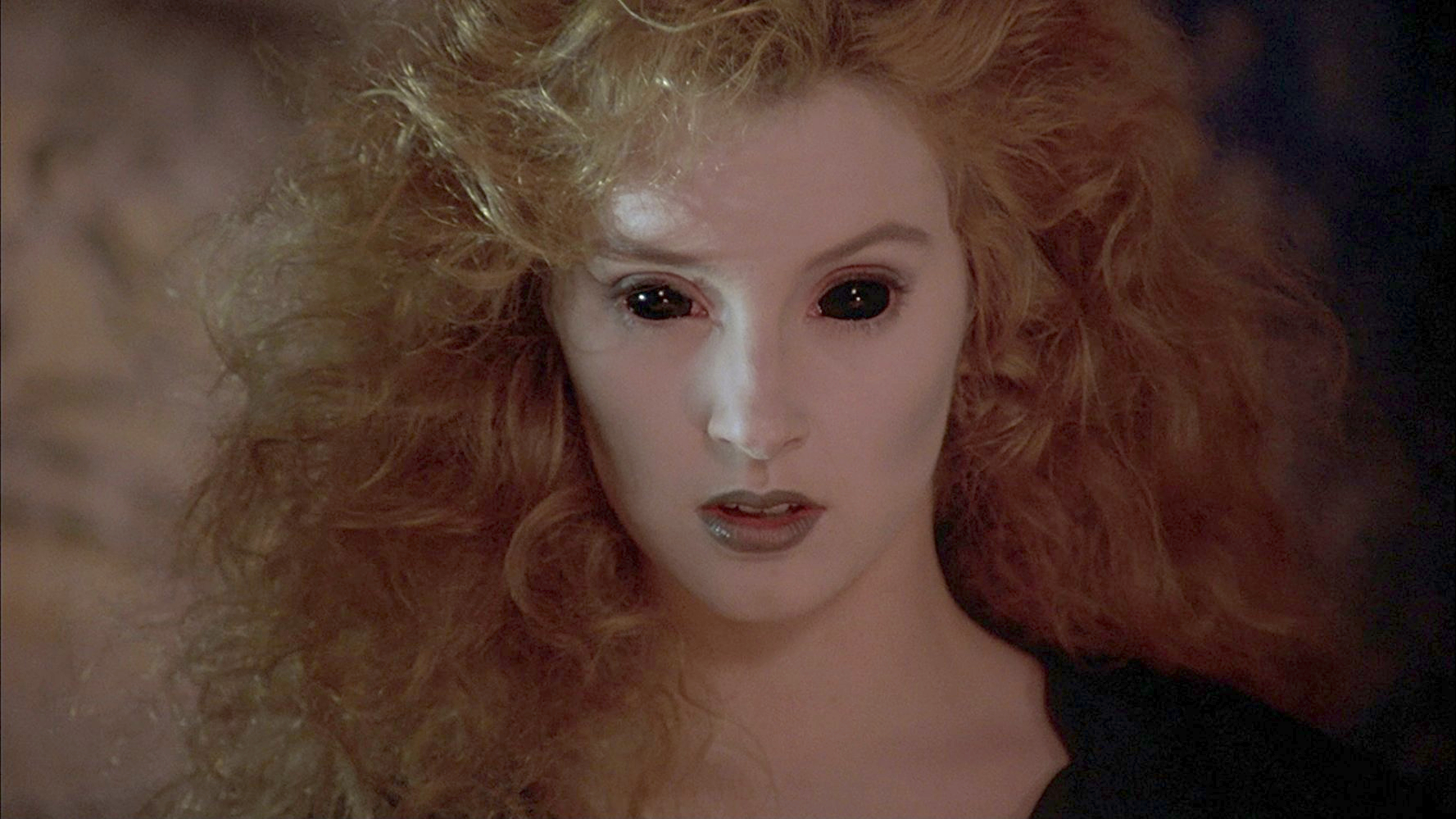 The rest of the monastic cast are just as good and also manage to humanise their roles, avoiding them becoming mere cyphers or stereotypes of monks. Having said that, Brother Marinus (Jeremy West) is a typically dour, fire-and-brimstone brother who hates laughter and wholeheartedly embraces the concept of fearing God. It’s a brilliantly pinched and picante study in severity by West, which sometimes skirts self-parody. He had started out in comedy, albeit as a funeral home attendant, in ’70s sitcom Mork and Mindy, but his ‘medieval’ looks have repeatedly landed him priestly parts and he himself wrote and starred in the short film, The Grand Inquisitor (2017).

The sharp-witted Brother Timothy is cleverly played by Vernon Dobtcheff, a prolific TV actor with a familiar face one may recognise from his appearances in Blake’s 7 (1979) or The Return of Sherlock Holmes (1987). He also played a monk in The Name of The Rose and later played Cardinal Versucci in Showtime’s The Borgias. He must just have that look of tainted piety! Most recently he has been seen in Jonathan Strange and Mr Norrell (2015) and as Kralefsky in The Durrells in Corfu (2017 -2018). 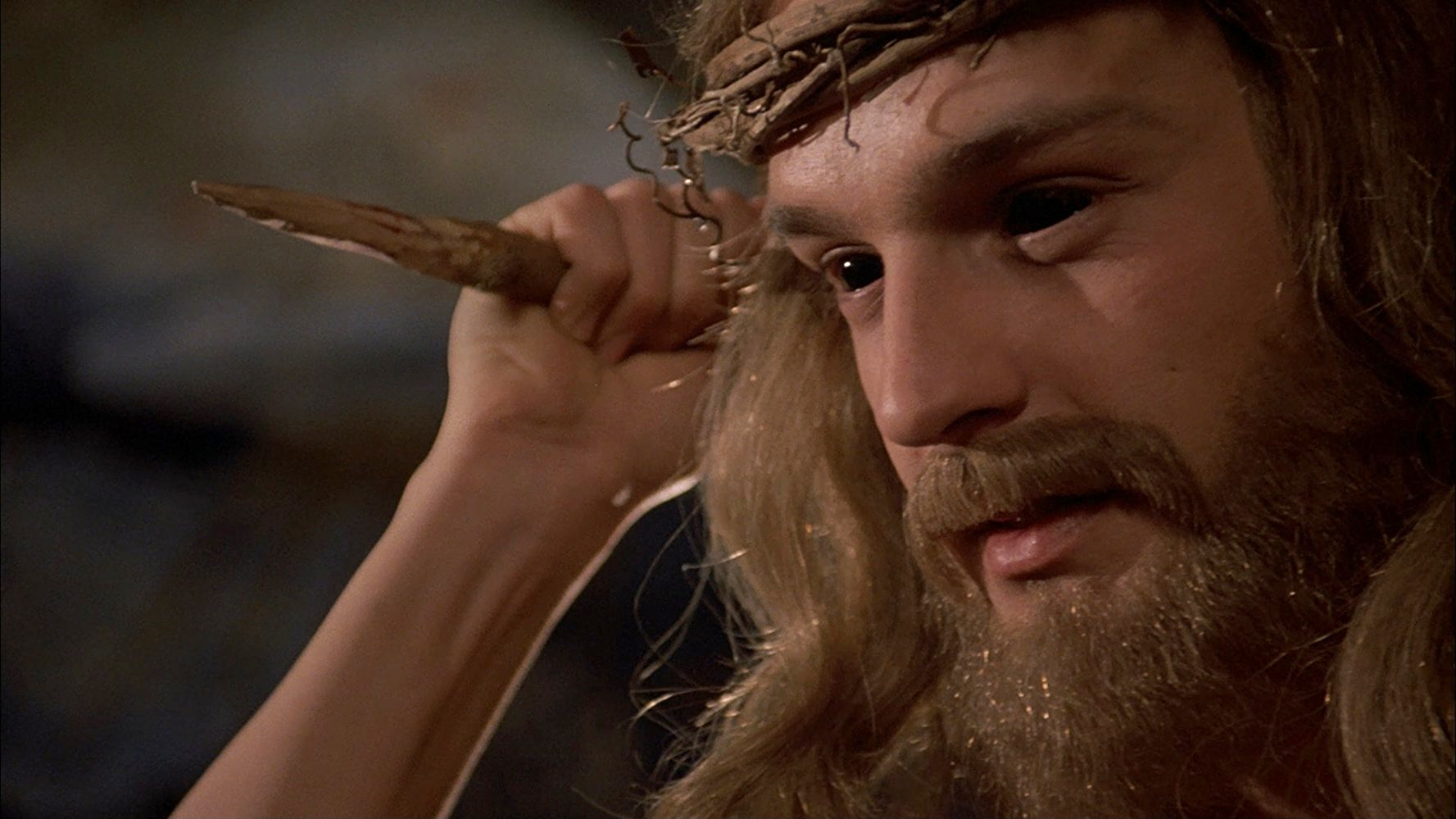 It’s no surprise that the cinematography, in the capable hands of Sergio Salvati, is beautiful. He contrasts the subtle colours in the hazy bright landscape of Umbria, Italy, with the baroque interplay of light and dark for the interior sets designed by Giovanni Natalucci, who’d previously worked with him and Schmoeller on Crawlspace. The way some details are barely revealed as they emerge from shadow, or move gradually into focus from a fuzzy background, provide some of the film’s more unsettling moments. He doesn’t miss the opportunity to use the visual grammar of religious paintings, where illumination that shines down from a 45-degree angle represents the light of God, giving form to the world and revealing its meaning.

Early in his career, Salvati has been assistant cameraman on a couple of proto-gialli, The Possessed (1965) and The Love Witch (1966), and most notably worked with Sergio Leone on The Good, the Bad and the Ugly (1966). He’d been the cinematographer on a number of significant Lucio Fulci films, including the consecutive quartet of City of the Living Dead (1980), The Black Cat (1981), The Beyond (1981) and The House by the Cemetery (1981)—ah, so that’s why the opening exorcism scene in Catacombs had that distinctive Italian horror vibe! 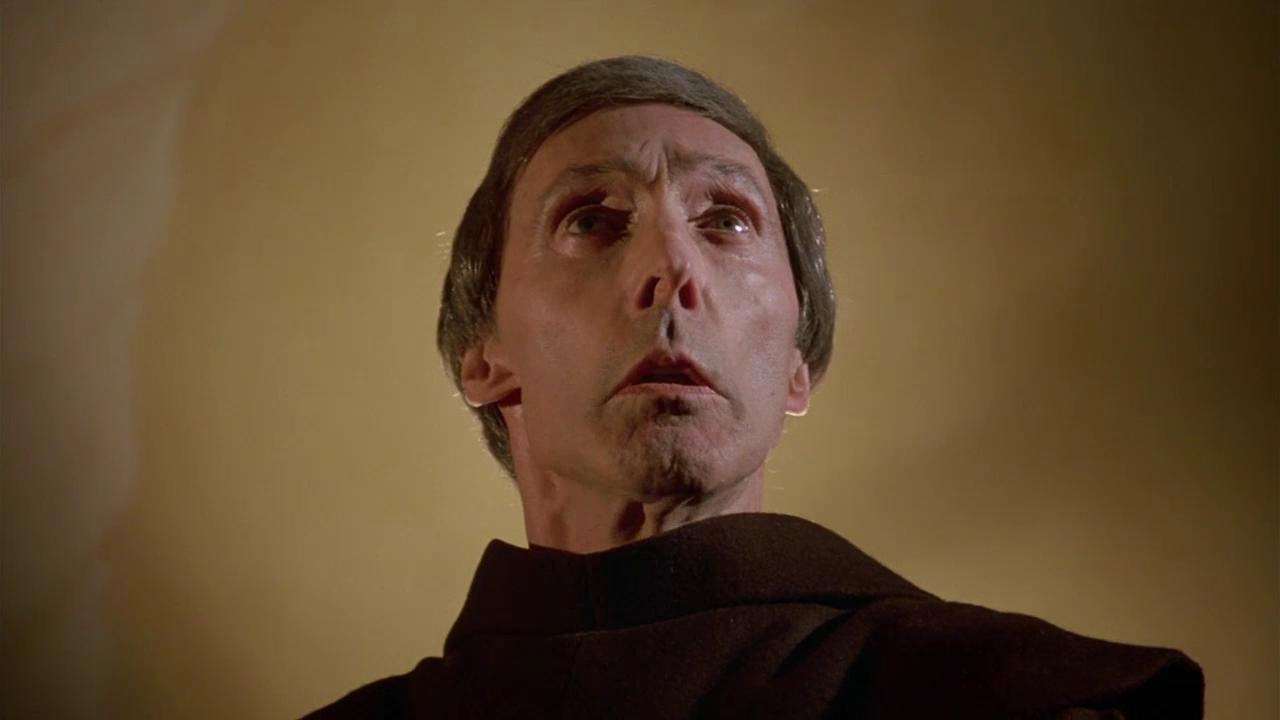 This film was made as part of a last-ditch effort by Charles Band to rescue his company, Empire International Pictures, from impending bankruptcy. He’d upped its output by relocating the production side to studios in Rome and was unashamedly churning-outing movies destined for the hungry home video market. Unfortunately, it was too much too late, and Catacombs was still in production as the company wound-up. Despite the ensuing bureaucratic chaos, and dwindling funds, Schmoeller managed to complete his film, just in time…

It was submitted for certification in the UK by Entertainment in Video distributors and, after 12 seconds were cut, the BBFC granted it an 18 certificate. A VHS rental release of Catacombs followed in 1989. There was little or no marketing fanfare, but it did become regular ‘fan-fare’ and gradually accrued a bit of cult status. This was short-lived and, soon after release, the rights entered into a legal limbo that lasted five years. Eventually, in a massive mis-marketing debacle, it was re-named and re-released in 1993 as Curse IV: The Ultimate Sacrifice, its curse theme being the only thing to link it to the floundering franchise. Recently, it was released on Blu-ray in the USA on Shout Factory’s Scream label, as a double feature with Cellar Dweller (1988), and as a result has picked up a handful of positive new reviews. Alas, there’s no news of a UK Blu-ray yet. 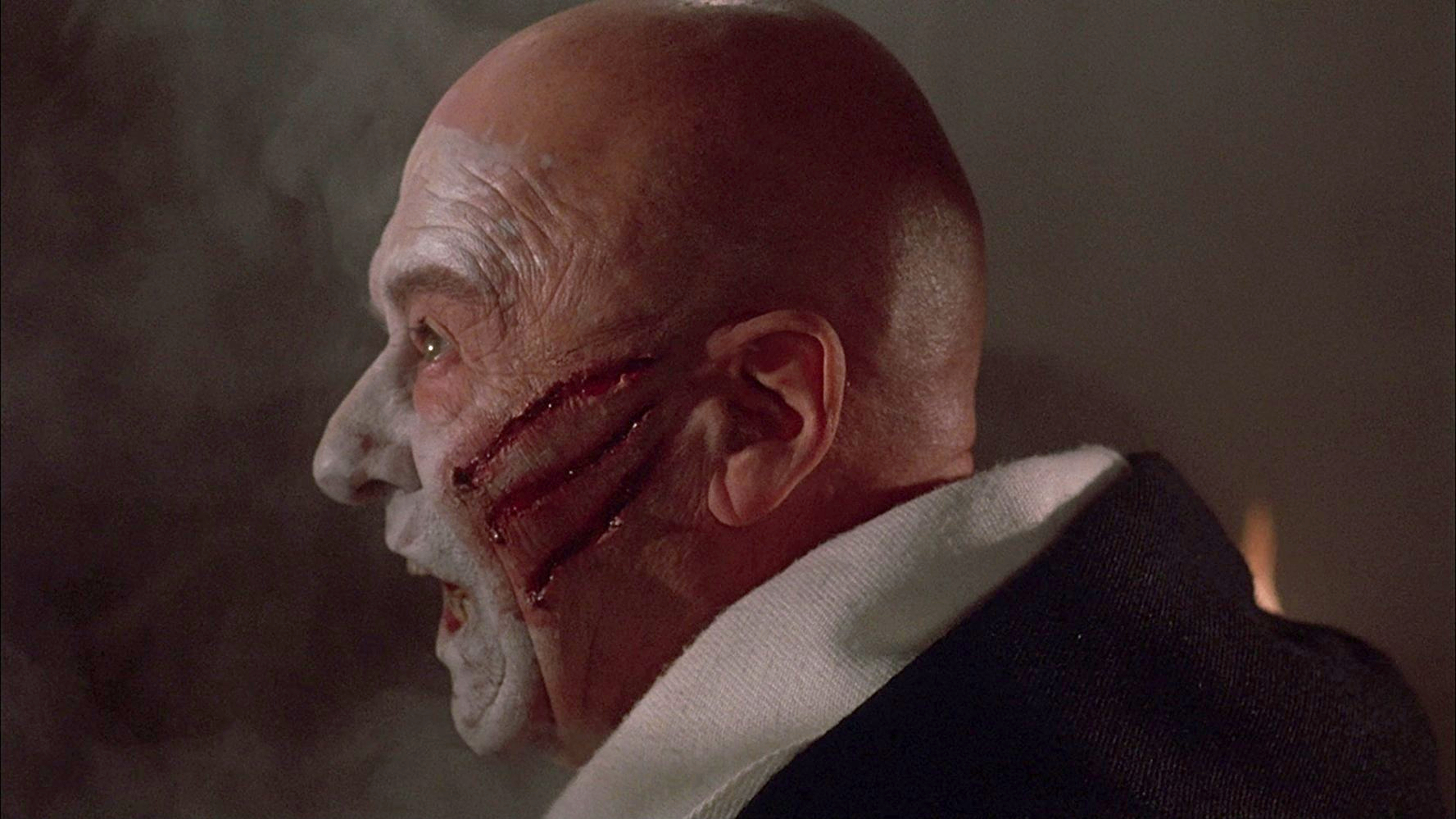 Catacombs is a genre classic that remains widely ignored and, sadly, never earned the respect it deserves. 30 years after it was made, a reappraisal is long overdue. It remains one of my favourites because everything about it works really well, but historically it’s been all-too-often dismissed by those who haven’t seen it, or by reviewers who misunderstood its subtleties…

For example, the rats roaming the catacombs aren’t white because they couldn’t source wild-looking brown ones, they’re the embodiment of the possessed monk from 1506 who, as the more observant viewers would have noticed, was an albino…