The penultimate hour of Westworld confirmed yet another of the three most persuasive fan theories, which in some ways is a shame if you’ve been aware of them for awhile. I have a feeling the writers suspected the reveal that Bernard (Jeffrey Wright) isn’t human was relatively obvious (and expected in a show with lifelike robots), so hoped it would throw people off the scent about him also being the park’s mysterious co-founder Arnold.

Of course, the vast majority of people watching Westworld don’t spend hours theorising about each episode, or visiting online forums, so I’m sure the writers take solace in that fact. It gets harder and harder to outsmart diehard TV fans, so the main thing is to ensure the story’s being told well and has the emotional heft simple ideas would be nothing without. And to that end, “The Well-Tempered Clavier” was another strong outing. Although I think there’s been too much emphasis on the show’s mysteries, with the characters and plot suffering as a result. 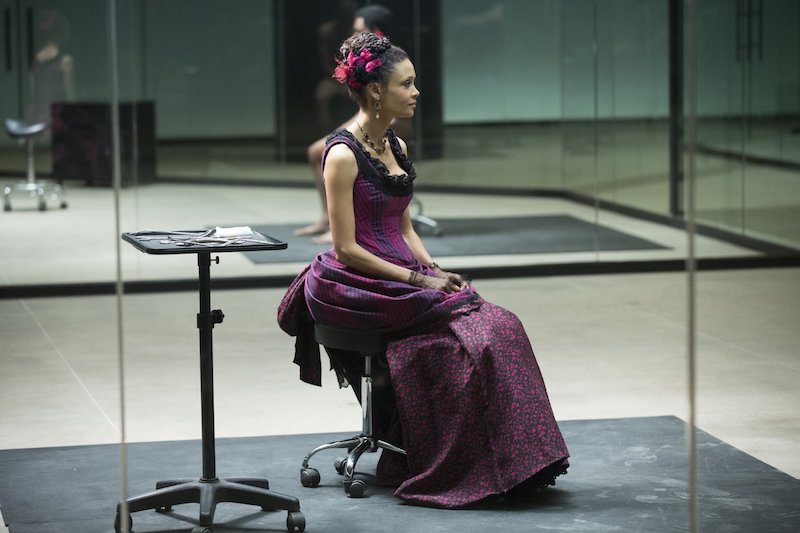 One thing I didn’t expect was Maeve (Thandie Newton) knowing Bernard is a fellow Host, because they’ve both reached this mutual understanding during a previous ‘loop’. The scene where she revealed everything to him was fantastic, as it seemed like a key tactical movement for Maeve to have someone like Bernard on the outside. Together with the two nerdy technicians, it was fun to see she’s amassing an army of sorts — particularly after she re-entered the park and managed to convince Hector (Rodrigo Santoro) that she’s essentially a divine being. If she does manage to wake Hector while he’s being patched up offsite, having been burned to death alongside her inside a tent she intentionally razed to the ground in the throws of fiery passion and talk of Hell, I wonder how that’s going to play out. Can two renegade Hosts cause much damage against the might of the Westworld infrastructure and its failsafes, such as the spinal explosives that were pointedly mentioned last week?

But while Maeve wants to desperately leave her “prison” of the park, for whatever truth lies beyond its confines, it’s interesting that Dolores (Evan Rachel Wood) has completely the opposite goal. She’s similarly aware she’s not “a real girl”, but wants nothing more than to follow the so-called Maze and find her elusive co-creator Arnold — a literal ghost in the machine, as his vestigial coding draws her repeatedly back to the same revelation: that Arnold (revealed to be the man Bernard was built to emulate) was killed by Dolores herself. Why did she do this? We’ll probably find out in next week’s finale, but one presumes the first time Dolores discovered her true nature she just didn’t take kindly to the whole idea and looking for bloody vengeance (much like Maeve). But maybe it’s not as simple as that. And how could a Host like Dolores so easily kill a human like Arnold, as that’s been a prime directive the show’s at pains to remind us. 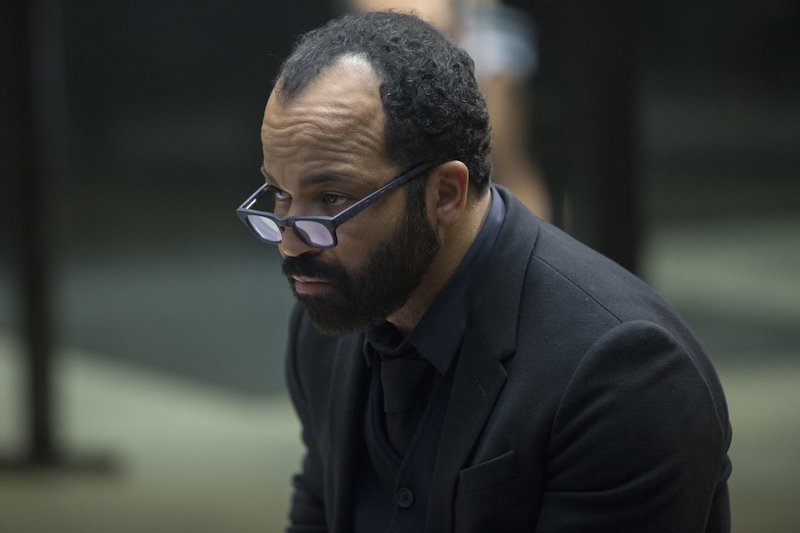 Indeed, the “no killing humans” golden rule was nicely avoided by Bernard when he lured Ford down into the basement for another frank discussion. This scene echoed the earlier one in “Trompe L’Oeil”, but ultimately went a lot further because Bernard (seemingly) outwitted Ford by having a freshly configured Clementine (Angela Sarafyan) hold him at gunpoint, forcing his creator to unlock all of his past memories.

I was poised for a clever twist regarding why Bernard was given a tragic ‘cornerstone’ memory of losing his son, Charlie, but it actually turns out this was just a backstory — albeit of the kind Arnold favoured as emotional anchors for the Hosts. There was even a second when I thought Arnold was going to be revealed to be Charlie, somehow, but no. It might have been amusing if the illustrious Arnold was revealed to be a child prodigy! Sadly for Bernard, while his devious plan seemed to be working brilliantly, meaning he got all his memories back about murdering Theresa and strangling Elsie (Shannon Woodward) — another fan theory proven true — wily old Ford was still one step ahead. He’d written a backdoor code that ultimately meant he was never in danger, with Clementine still unable to cause him harm, and Bernard ultimately ordered to commit suicide by blowing his own brains out. It was a crushing blow, not least because it presumably scuppers a lot of whatever Maeve has planned for Bernard as her ‘inside man’, and you just have to feel desperately sorry for Bernard’s fruitless attempts (maybe over many, many years) to finally escape his programming and outsmart Ford.

With so many big events taking place outside of Westworld, it was good to also get some big developments with William (Jimmi Simpson) and Dolores inside the park. They’d been captured by William’s “friend” Logan (Ben Barnes) and the Confederados he’d been put in charge of since they parted ways. When we last saw Logan in the town of Pariah, he was being left behind by his future brother-in-law, to be viciously tortured, so it was fair to say they weren’t on great terms this week. And despite William imploring Logan to notice that Dolores is more “aware” than the other Hosts they’ve been dealing with, stupid Logan still can’t see beyond what he hopes is true about Westworld: that it’s just a big game, full of expendable robots you’re allowed to rape and murder. In some ways, Logan just doesn’t want to know any different, because it’s easier to buy into the whole fantasy. How he chose to try and convince William of the world’s “unreality” was very uncomfortable, however, as he stuck a knife into Dolores’s belly and revealed her metal innards. This moment subtly confirming that the William/Logan storyline is taking place decades ago, when the Hosts were less sophisticated than the modern type (which are indistinguishable from humans, even beneath the skin). 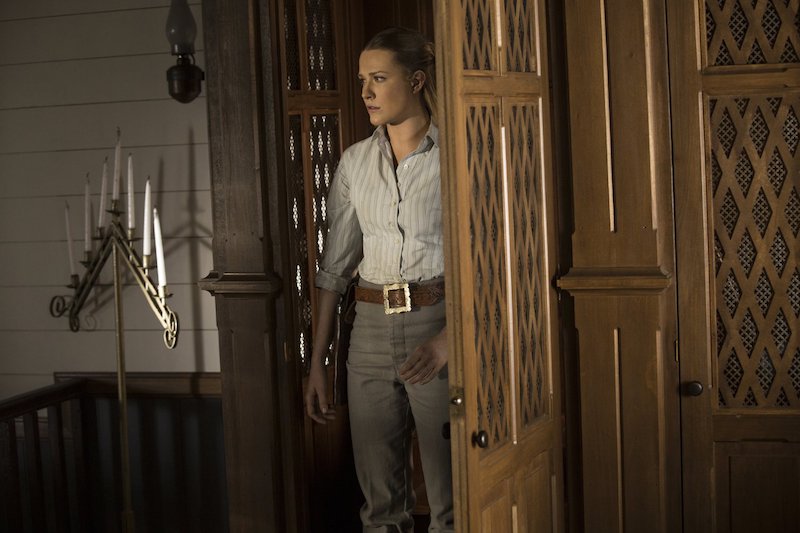 Regardless, Dolores didn’t adhere to programming and die from her wound (as one would expect a Host to), and managed to escape from Logan’s men and flee on foot. Arriving at the so-called ‘City Swallowed by Sand’, Dolores’s memories of the place once again started to skip across time, as she entered a church confessional and discovered it was an elevator to an underground room where Arnold/Bernard greeted her. Only, Arnold wasn’t alive, as some have speculated, but instead one of Dolores’s vivid memories. Indeed, it now seems that the William/Logan adventure has been a memory Dolores is having, as she retraces her steps around the park from an earlier loop — triggered by the Man in Black (Ed Harris) assaulting her in the present day. That hangs together, sort of, although one has to wonder why the park technicians aren’t concerned they have a Host wandering around talking to ghosts from the past. Maybe there’s something I’m missing, or it’s another example of the show’s logic not quite working.

As penultimate episodes go, “The Well-Tempered Clavier” certainly delivered lots of answers and set things up very nicely for a big and eventful finale. However, it’s become clearer since mid-season that too much of the show relies on the withholding of information and the audience being asked to accept some lapses in logic. I’ve enjoyed the Maeve storyline the most, as it’s the most linear and closest to what the Westworld concept was originally all about. The rest has been very interesting and undeniably thought-provoking, but also increasingly difficult to hold steady in your head. Dolores was my favourite character earlier in the season, but it’s since become impossible to really attach yourself to her story because it’s so wilfully confusing. And I’m not sure revealing we’ve been watching things non-linearly is going to justify the approach the writers have taken. 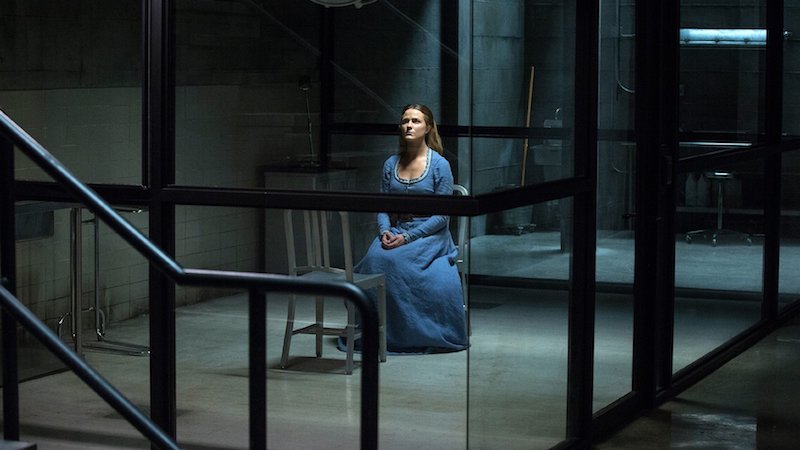