Disney’s Moana feels like a strange choice for a winter/Christmas release, given that it’s one of the brightest and most summery feeling films of the year. But if it doesn’t quite fit with the seasonal weather (at least not in this hemisphere), it is the sort of beautiful, inspiring, and good-natured filmmaking that feels perfectly timed to counter the torrent of terrible world events the past few months has wrought.

The story is set in some undefined South Pacific past, using Polynesian myths and legends as its principal inspiration.

Moana (Auli’I Cravalho) is the daughter of the chief of a small island tribe and is being prepared to one day lead her people. While the tribe is superstitious about ever leaving the comfort of their island, Moana feels the call of the sea. When life on the island becomes compromised, Moana realises  she’s been chosen by mysterious forces to help put things right, and sets out on a great adventure across the oceans in search of the legendary demigod Maui (Dwayne Johnson), who might just hold the key to saving the island… 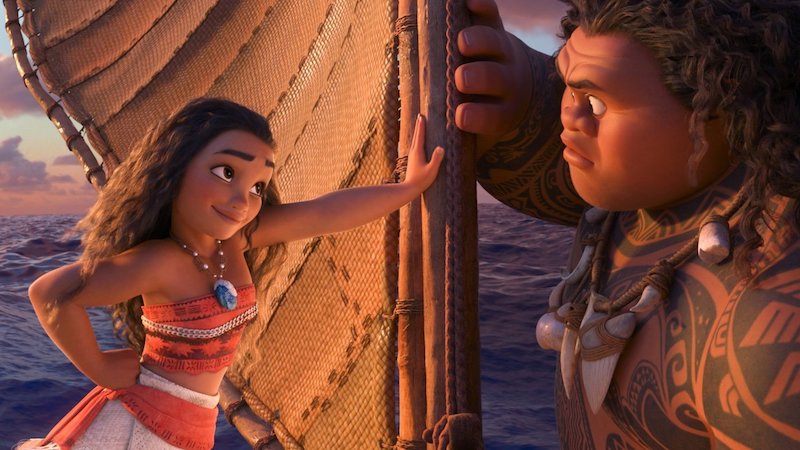 Much has been made of Moana being the first Polynesian Disney Princess, although she’s no such thing, spending the entire film adamant she not be referred to as such. While this is obviously the writers getting a little bit meta for a knowing audience, it’s also indicative of a new breed of Disney hero. Moana cannot be reduced to “a princess”, she’s a fully rounded character; as headstrong and independent as any Disney hero has ever been. She sets out for adventure on her own, and there’s never even a hint of a romantic interest. Moana is a hero worth aspiring to.

Of course, she doesn’t spend the entire film on her own. Moana is joined by Dwayne ‘The Rock’ Johnson’s Maui, a cocky demigod who flits between ally and antagonist, as well as a dim-witted chicken that provides slapstick moments for younger audiences.

Johnson is a perfect fit for the arrogant, irrepressible Maui, even taking his big song gamely. But it’s in Moana herself that the film’s casting is so impeccable. Newcomer Auli’I Cravalho is wonderful in the lead role; so good in fact that much of the character’s personality and traits were styled on her own. In a very real sense, Cravalho is Moana. Jermaine Clement, meanwhile, pops up with a fun cameo halfway through, playing a kleptomaniac crab. A very reliable scene-stealer, it’s just a shame the Kiwi actor didn’t get more to do. 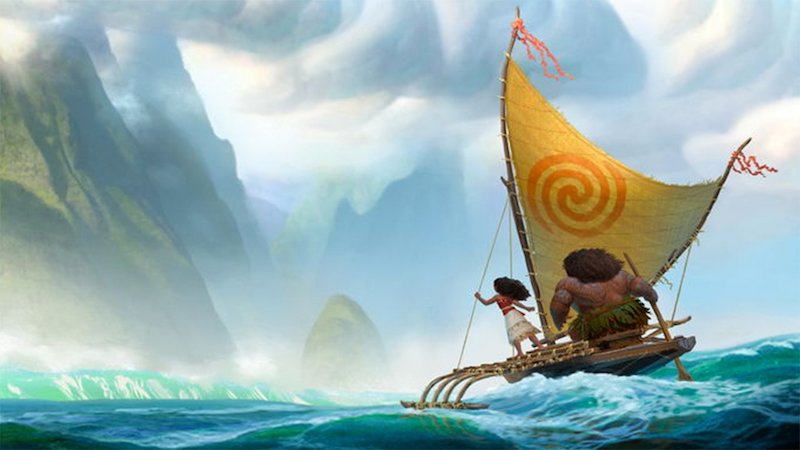 And of course, the whole film looks fantastic. The computer generated animation is beautiful throughout, and with the colour palette all lush greens and bright blues, this is clearly a film that revels in the beauty of nature. Even the final enemy (a stunningly rendered lava demon) is more a primal force of nature than the Mouse House’s traditional scheming villain. And it’s not just visually that the film has the natural world at its heart, as the entire plot is as much about respecting nature and protecting the planet as it is about Moana finding her own place in the world.

If there’s a glaring issue it’s that, for a Disney film, it’s not especially funny. What humour there is appears to be pitched at the younger audience, but even so there’s a dearth of big laughs. That doesn’t detract from the great character work or the strong narrative, but it’s noticeable in comparison to, say, Zootropolis. The songs, while not as catchy as some in Disney’s oeuvre, are utilised well, serving as a way of advancing the narrative and character development, with certain numbers recurring and evolving throughout the film. Ultimately, the songs that washed over you early on might well have you punching the air in delight by their final reprise. 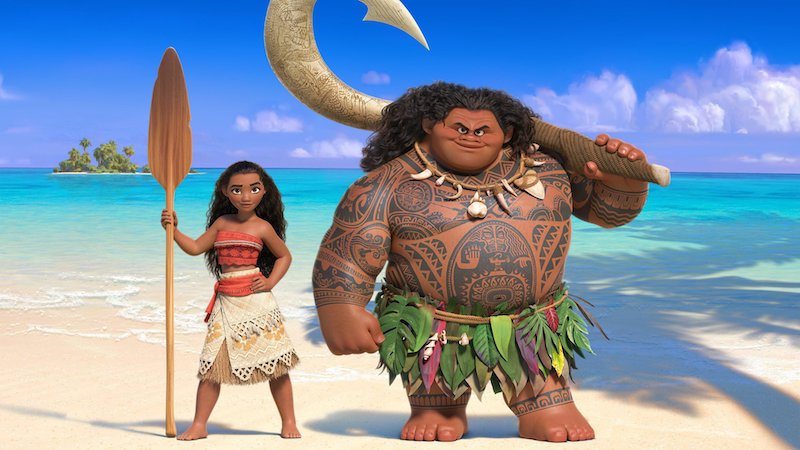 Balancing out the lack of laughs and catchy choruses is a commitment to accurately portraying a culture we very seldom see at the cinema. The number of writers (seven!) is indicative of how many consultants were on board to ensure that this was a culturally sensitive and true depiction of Polynesian history and legends. The attention to detail shines through in the finished product.

There are several wonderful flourishes that make Moana feel like a uniquely Polynesian prospect. Occasional forays away from computer animation and into traditional art feel perfectly welcome, while Maui’s living, moving tribal tattoos are a delightful innovation. The script, too, has surprising depth, particularly when it comes to revealing Maui’s backstory.

Moana doesn’t break Disney’s successful formula, but it is one that subtly tweaks it for modern audiences. The bright and vivid world is brought to life with well-thought-out and varied animation, and the exploration of a lesser-seen culture make Moana feel fresh. It won’t change the world but it is a warm, satisfying and distinctly modern Disney animation with a distinctly modern central character. Just don’t go calling her “Princess”.