Let’s start with the most unmistakably meta moment in “The Great Red Dragon,” which occurs when Dr. Chilton (Raúl Esparza) visits the now-incarcerated Dr. Lecter (Mads Mikkelsen). When Chilton, comparing Hannibal to serial killer at large ‘the Tooth Fairy’, tells the doctor that “You, with your fancy allusions, your fussy aesthetics, you’ll always have niche appeal,” its impossible not to read the line as showrunner Bryan Fuller (who co-wrote the episode with Nick Antosca and Steve Lightfoot) admitting and proudly owning the fact that Hannibal is an acquired taste. Whereas the Tooth Fairy, as Chilton puts it, is a “four-quadrant killer”—his modus operandi of murdering entire idyllic suburban families would fit comfortably in any of the killer-of-the-week procedurals that Thomas Harris’ Red Dragon helped inspire. I’ve seen it suggested in more than one place that Hannibal’s fate might have been different if it kicked off the season with this arc—a familiar story that’s easier for new viewers to jump into than Hannibal and Will’s odd, cerebral, giallo-influenced European vacation. But Fuller has stuck to telling the story he intended to tell, and whether or not Hannibal continues in some form, I admire the hell out of his integrity.

In any case, we’ve arrived at last at Hannibal’s take on Red Dragon, the strongest of Harris’ books featuring Lecter (in more of a supporting role than the subsequent ones). A tightly-plotted, riveting novel featuring a killer who’s at once monstrous and oddly sympathetic, Red Dragon has already been the basis for Michael Mann’s excellent Manhunter and Brett Ratner’s so-so Red Dragon, which I mostly remember as a waste of one of the best casts ever assembled. As Fuller and Hannibal’s writers have frequently added, changed and rearranged the details of Harris’ books into their own chronology, I’ve wondered how faithful an adaptation of Red Dragon his would prove to be. As it turns out, it’s a surprisingly faithful one at its start, though it’s still early, and I’d be surprised and a bit disappointed if the show doesn’t end up subverting a few of our expectations. 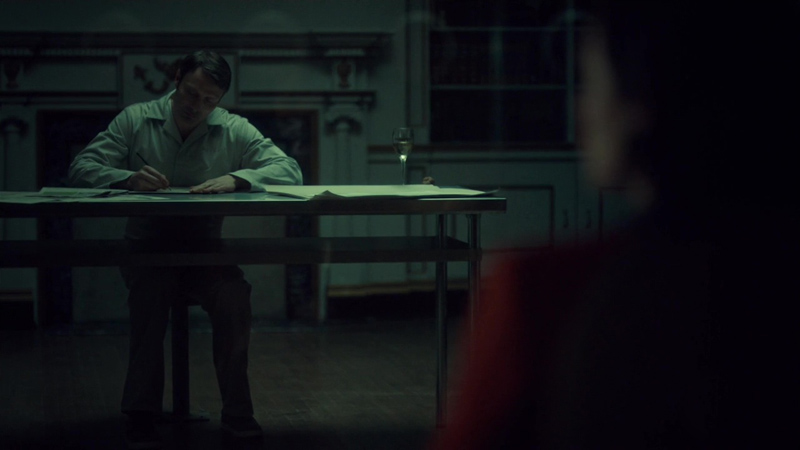 First, however, there’s the matter of reintroducing us to its title character after his surrender on the last week’s episode. As the show jumps ahead three years, we’re reintroduced to Dr. Lecter quite ingeniously, seeing how he uses his “memory palace” to envision himself talking to Dr. Alana Bloom (Caroline Dhavernas)—who’s replaced Chilton as the director of the institution where Lecter now resides—outside of the confines of his (still remarkably spacious) cell. I wondered a few weeks ago if, after his capture, this Lecter would deliberately play the boogeyman for his own amusement as his movie counterpart did—as it turns out, this Lecter’s sense of humoir is drier, but he still takes a perverse pride in reminding people of the details of his crimes (“The blood was from a cow, only in a derogatory sense”). Later in the episode, continuing with the seasons theme of breakups, Hannibal writes a letter to Will (Hugh Dancy), urging him not to help Jack Crawford (Laurence Fishburne) with the Tooth Fairy case; as the doctor writes, “We have all found a new life, but our old life hovers in the shadows.” If the season’s first half was all about exes that are hard to shake, it appears that the Red Dragon will, at least in part, be about what happens when we need to revisit the past to make sense of the present.

Judging by this episode, it also looks to be a worthy adaptation of Harris’ novel in whatever direction the show takes it. Directed by Neil Marshall, the episode featured two sequences that rank among the show’s best. The first is the opening introduction to the Tooth Fairy, Francis Dolarhyde (Richard Armitage). It begins with the Dolarhyde’s revelation upon seeing William Blake’s The Great Red Dragon paintings for the first time (oh, to live in a world where Time magazine features a Blake retrospective as its cover story) and ends, after he’s murdered the Leeds family, with Dolarhyde illustrating one of the most chilling lines from Harris’ book: “Have you ever seen blood in the moonlight, Will? It appears quite black.” Armitage is immediately compelling in what is, in this sequence and most of the episode, a nearly dialogue-free performance, and Marshall does a great job, within the show’s unique aesthetic, of establishing a tighter pace that signals that the show has shifted gears. Few shows share Hannibal’s boldness in periodically shaking up its storytelling formula, even within a season, and this may have been its boldest move yet.

The other great sequence came near the episode’s end, as Will went by himself to investigate the bloody crime scene at the Leeds’ residence. It’s a familiar scene from the book and films, and while Hannibal’s version doesn’t quite shake the memory of Manhunter, it works brilliantly on its own. Dancy’s performance is crucial here, particularly as we’ve just been reintroduced to Will as a genuinely happy, healthy guy with a wife and stepson. Interestingly, it’s Will’s wife, Molly (Nina Arianda) who convinces him that he should accept Jack’s request for help, a welcome change from the books, where Molly pleaded with Will to stay—it’s not only a nice reversal of gender stereotypes, it gives this version of Will a more persuasive reason to risk his happy new life by having his wife reminding him that the perfect families being murdered aren’t too different from his own. What Michael Mann implied in Manhunter with the business involving the turtles (seriously, see Manhunter if you haven’t), Hannibal makes explicit from the outset.

Will’s walk through the Leeds home is a showcase for Dancy; whose character began, first and foremost, as a guy whose extraordinary capacity for empathy is as much a burden for him as it is a benefit to society. I particularly loved the moment where the camera pushes in as we see Will go through a range of emotions when confronted with the bloody scene in Mr. and Mrs. Leeds’ bedroom, fighting to stick to the police report, and a more detached analysis of the scene before finally succumbing to his gift/curse. As we watch Will envision himself in the role of the Tooth Fairy, narrating as he murders the married couple and their two sons, it’s both heartbreaking to see Will back in this position and exhilarating to see him put the pieces together before arriving at a moment of epiphany. By the time he concludes with the now-familiar mantra “This is my design,” it’s clear that Will is exactly where he needs to be, even if we wish it were otherwise for the poor guy.

It’s this necessity that reunites him with Dr. Lecter in the closing moments of the episode, which succeeded in conveying the weight of an overdue reunion even though we saw these guys together last week. It remains to be seen where this Red Dragon goes from here, with the episode demonstrating both reverence for Harris’ book and, especially during Dolarhyde’s creepy celluloid hallucination, a commitment to the moments of disturbing visual poetry that the show does so well. It was gratifying to see Will back in crime-solving mode—especially as we finally saw the return of forensic experts Price and Zeller (Scott Thompson and Aaron Abrams)—but it remains to be seen if his journey ends with the resolution of the movies, the darker fate of Harris’ book or something else altogether. Whatever the case may be, I’m glad the show is sticking to its niche.