UNIT, eh? What are they like? Considering they’re one of Doctor Who’s last defences against all manner of alien incursions, they always seem to miss the obvious and disregard their training when alien blobs pretend to be their mothers. You just can’t get the staff. Writer Peter Harness, whose “Kill the Moon” split the jury last year, tackles the Earth-based alien invasion tropes, has a fine old time rifling through the SF back catalogue, and puts the Zygon-human peace treaty established in “The Day of the Doctor” into the current context of the migration debate and the ongoing ideological war with ISIS.

It’s not particularly subtle, what with all the talk about radicalisation, but science-fiction and horror have always reflected the culture in which they’re made. “The Zygon Invasion” therefore gives a tip of the hat to many eloquent predecessors: the cosy catastrophe of Wyndham’s “The Midwich Cuckoos”, with Zygon leaders disguised as children; the pod replacement of loved ones at the core of Jack Finney’s “Invasion of the Body Snatchers”, the organic, oozing Zygon technology and the orange, suckered blobs mirroring the body horror of Alien; and the Zygons living among us a reflection of the influx of immigrants depicted in Alien Nation and the apartheid metaphor of District 9. 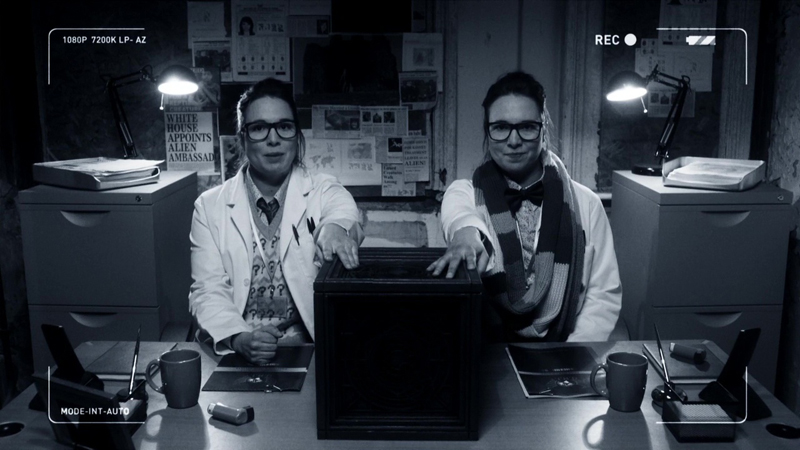 Here, the discourses of immigration and radicalisation are filtered through a war where the enemy becomes indistinguishable from an ordinary citizen. The socio-cultural media artifacts of that war are included too: cyber and drone warfare, hostage execution videos, terrorist attacks, and cultural separatism. It’s this The Doctor (Peter Capaldi) alerts the two schoolgirls Jemima and Claudette (an amusing representation of the Zygon High Command) to during the opening scene in a children’s playground. “These are our children and we will deal with them,” is the response to The Doctor’s request when he realises the fragile peace is breaking down. An uneasy situation is not helped when The Doctor comes across like Eric Pickles sending out patronising letters to Muslims asking them to deal with radicalisation in their own back yards as the Zygons face “a revolution in their younger brood”.

In the meantime, the surviving cosplaying Osgood (Ingrid Oliver)—one of the Osgood twins had the misfortune of a fatal encounter with Missy in “Death in Heaven”—is kidnapped, the secret location of 20 million Zygon immigrants is about to be revealed, and a faction threatens to destroy all UNIT troops around the world. “The war is about to be begin,” intones Osgood from her hostage video, and “there will be truth or there will be consequences.” We learn that the twins were responsible for holding the peace together but since Missy killed one of them the situation has deteriorated. It’s interesting that The Doctor once again refers to this Zygon-human interface as a hybrid, reminding us of one of the ongoing themes so far this year. 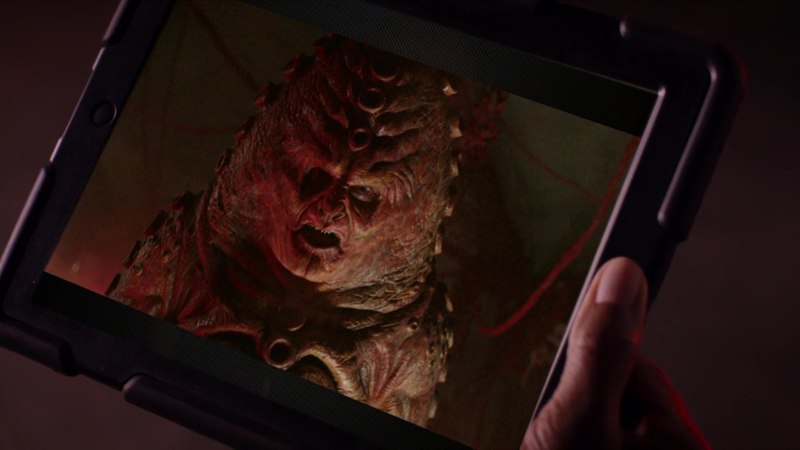 The Zygon faction demands the freedom to live as themselves and social acceptance of their true otherness. The gradual possession of key characters personifies how the infiltration affects the elite representatives of government, intelligence services, the army, and, in the sequence at Clara’s block of flats, a frightened little boy afraid his parents aren’t what they seem. The latter is perhaps the most disturbing scene in the episode. It baits the child audience with the fear that aliens may have taken over their parents and, if you were paying attention, its also shows the Clara (Jenna Coleman) that leaves their flat and joins The Doctor is certainly not the Clara that went inside. That the little boy ends up in a sack dumped underneath London in a Zygon cave adds a further grim edge to the episode.

127 missed calls later and with her Trivial Pursuit knowledge suspiciously coming in handy, Clara meets The Doctor, Kate Stewart (Jemma Redgrave), and UNIT operative Jac (Jaye Griffiths) at a Zygon base hidden away inside a school. After warning Kate that bombing the insurgents is no solution because “if you do that, it will radicalise the others”, The Doctor determines that she should negotiate for Osgood’s return in the New Mexico town of Truth or Consequences. Clara and Jac remain to monitor the UK while he ponces about on a big plane to the fictional Afghanistan-inspired principality of Turmezistan. The moral panic subtext of the scene lies in a final demand to Clara and Jac, “This is your country. Protect it from the scary monsters. And also from the Zygons.” The slight problem here is the narrative then splits three ways and the combined twist takes a while to gather steam. 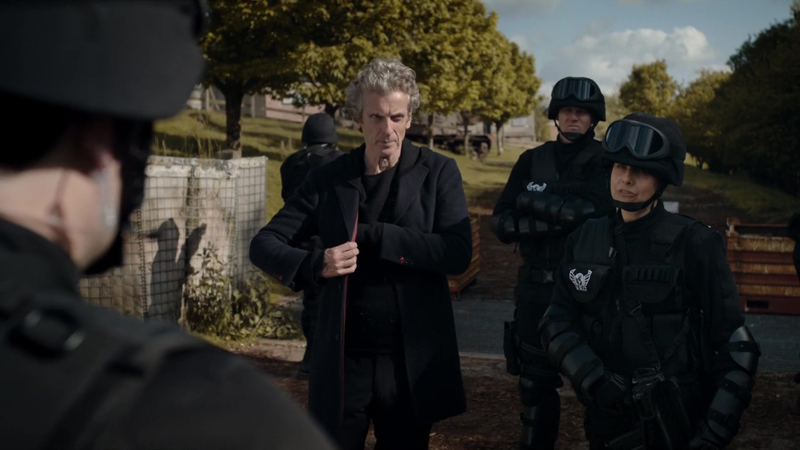 Die-hard fans will no doubt be amused by Kate Stewart’s mention of the previous Zygon invasion “in the 1970s or ’80s” as a nod to the ongoing thorny question of dating the UNIT stories of the classic series and her report of a certain naval surgeon who worked on Z-67, a DNA scrambling nerve gas effective on the Zygons. My guess is this is what Osgood is referring to in the pre-titles sequence as the ‘Osgood Box’ (the formula and gas were confiscated by The Doctor) and in true Chekovian style the mere mention of it should ensure it gets used in “The Zygon Inversion” next week, unless Harness is being perverse.

The ‘aliens among us’ discourse culminates in Turmezistan with scenes where a strike is aborted by a UNIT operative when she sees her own child waving back at her on screen from the strike zone and troop leader Hitchley (Todd Kramer) is ordered to shoot a Zygon masquerading as his mother. Even though he has been warned that these aliens are shape shifters, his UNIT training is all for nothing it seems and the Doctor and UNIT Colonel Walsh (Rebecca Front) realise how difficult it is for a son to shoot a mother who doesn’t remember the name of his favourite teddy bear.

In what proves to be Jac’s massive understatement “there is something very wrong happening underneath London” (no, not Yetis or Cybermen this time), she and Clara investigate what lies at the bottom of several lift shafts. Meanwhile the Doctor tries to determine whether the Osgood he’s rescued is human or Zygon only to be told “I don’t answer that question” because she believes she and her twin where the embodiment of the peace and she is human and Zygon. The old rules have been deferred she states and the Zygons can now “pluck loved ones from your memory and wear their faces”. This neatly takes us back to the cave under London and Kate’s encounter with police officer Norlander (Gretchen Egolf) in New Mexico. 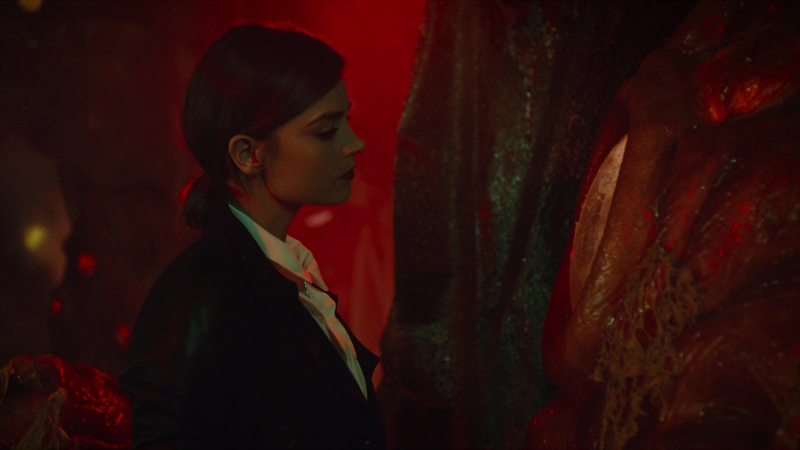 Truth and consequences indeed. Norlander and Clara are members of the Zygon faction and the episode twists on this double revelation with poor Jac and Kate realising the invasion is already in full swing. However, note that Clara orders the destruction of the “traitors”. Do we see the death of the human Jac or her Zygon double? And is Kate dead again? This nail-biting conclusion wouldn’t be anything without the Bonnie-Clara Zygon then launching a missile at The Doctor’s plane as it nears the coast in a cracking cliffhanger to the episode.

“The Zygon Invasion” is a welcome change from recent episodes, offering a grittier real-world approach to a familiar Doctor Who format with a sense of scale and mounting tension as the episode draws to a close. Coleman expertly turns Clara into evil Bonnie Zygon and Capaldi remains effective despite The Doctor being somewhat sidelined by the various sub-plots. It’s great to see him reunited with Front too and she’s good as the no-nonsense Walsh. The Zygons, a classic Doctor Who design thankfully left intact by the production for once, provide an interesting perspective within the somewhat hamfisted approach to the socio-political themes of the day.