“Four seconds into the film and I’m already vexed”, I told the unfortunate person watching Rogue One: A Star Wars Story with me, as soon as I realised Gareth Edwards wasn’t treating me to a new opening crawl. I had also noticed there was no John Williams fanfare, either. Then, from “a vast sea of stars” (as George Lucas wrote for his original Star Wars script), a planet emerged. I recognised the familiar element and stopped panicking until — horror! — a sacrilegious white caption appeared on screen telling me the planet’s name. This is no Star Wars, this is a travesty! My beloved sci-fi never before felt the need to point out, so obviously, we were on Tatooine. I was ready to pick up my coat and go, outraged by the lack of deference the British director was showing to the canon. Instead, I gave it a chance, I remained on my seat, and I’m glad I did because Rogue One turned out to be the Star Wars movie we’ve been hoping to see for years. It’s an intriguing space adventure, a blazing war film, and a slick crescendo of emotions. Yes, for fans too: once the uncompromising, nitpicking attitude is set aside, you’ll realise that Rogue One is closer to the spirit of the Original Trilogy than one might initially think.

Anyone vaguely familiar with Star Wars will probably already know how Rogue One fits into the chronology, closely preceding what’s now called Episode IV: A New Hope. It works as a one-of-a-kind standalone entry, albeit still part of the franchise Disney bought from Lucasfilm in 2012. The story of Rogue One concerns the group of rebels who stole the blueprints of the Death Star (the invincible battleship the Empire created to finally extend its overwhelming reach over the galaxy). Its destruction was Luke Skywalker’s mission in the original 1977 movie, so we already know where events are leading, so why bother watching Rogue One at all? With the same spirit we all watched Episode III: Revenge of the Sith (2005), when we were all dying to see the final transformation of Anakin Skywalker into Darth Vader, we can now appreciate that what matters is not the destination, but the journey. 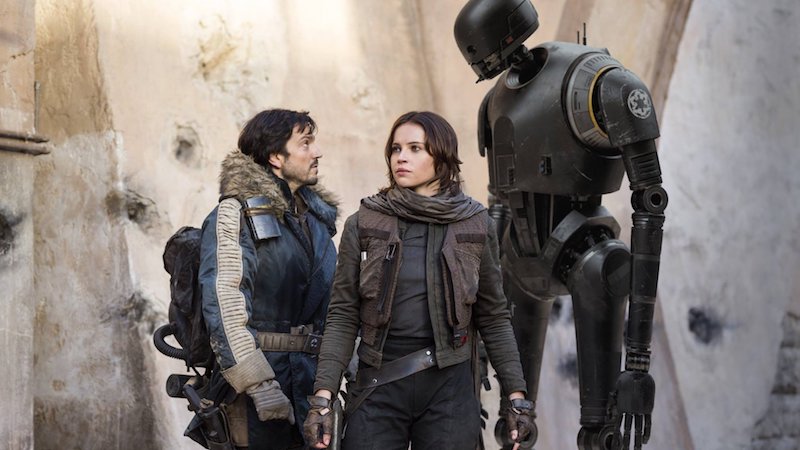 How did the rebels obtain the information they needed to launch their attack, then? It was all thanks to a handful of soldiers led by Jyn Erso (Felicity Jones) and Cassian Endor (Diego Luna), with the help of radical Saw Gerrera (Forest Whitaker), blind monk Chirrut (Donnie Yen), his sidekick Baze Malbus (Wen Jiang), and the traditional comic relief droid (a motion-captured Alan Tudyk). Joining the cast are a myriad of other high-profile actors, including Riz Ahmed, an oddly under-utilised Mads Mikkelsen, Alistair Petrie, and Ben Mendelsohn. As if they weren’t enough, other famous faces have been included with computer graphic (to mixed success), allowing us to see the return of old ’70s favourites.

At 2 hours 15 minutes, there’s space for everybody; but still, juggling all of them was no easy task for Edwards, but everyone’s given a chance to shine, and a few of them steal the spotlight, such Whitaker and Mendelsohn. I wasn’t entirely sold on Jones, sadly: her screen presence and delivery of some lines occasionally felt odd and uncertain. Considering the heat Daisy Ridley got last year for a far more convincing performance, I wouldn’t be surprised if the internet trolls were to make a comeback. 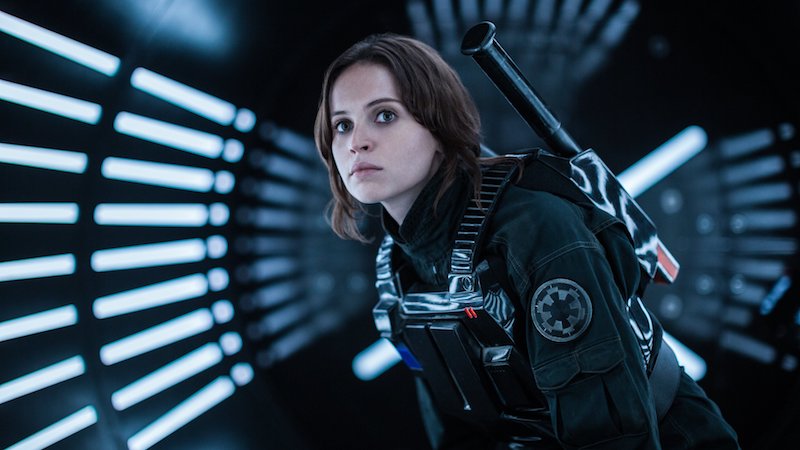 On a similar note, the first half of Rogue One struggles considerably to build some pace. The introduction of characters and the transition into the second act are confusing, erratic, and badly structured. Too many jumps, too little heart. More often than not, Michael Giacchino’s score also feels like a clumsy reinterpretation of the insuperable John Williams music, absent from a live-action Star Wars movie for the very first time. But as soon as the story gets going, and Edwards finds a good rhythm, the ride gets really fun, becoming exponentially more entertaining until a sensational finale. On his side, the director has the considerable advantage of not needing to push so much on the nostalgia effect that dampened JJ Abrams’s Episode VII: The Force Awakens (2015).

Ironically, the trick to making a great Star Wars film was to forget about Star Wars: with no need to incessantly mirror themes, subjects, places, phrases, character motives, and actions from the previous movies. Edwards is free to direct this spin-off as he pleases, and he does so by keeping the fan service subtle but marvelously effective. This allows him to tell a story that’s meaningful and full of things to say; that feels like Star Wars but reminds you more of The Dirty Dozen. A notable difference, when compared to the pointless, self-serving mysteries of The Force Awakens, or the embarrassing fluff that made the prequels so notorious. One more thing I appreciated: almost no lightsabers. I can hear your inner child crying, but just remember how little the Jedi’s signature weapon was used in the Original Trilogy? The result is that, when a lightsaber finally appears in Rogue One, it looks spectacular, and your heart skips a beat.

As usual with his movies, Edwards raises all sorts of deep, relevant questions. What does it mean to be a rebel? How violently can you respond to the violence of the powers-that-be? Does the end justify the means? It would be so easy to turn these into rhetorical questions and focus on making bigger explosions: maybe that’s the only thing most of the audience would really care about. Or maybe not, and the real reason why Star Wars became such a phenomenon is that it was never just a silly space adventure in the first place.