The voyages of the U.S.S Enterprise reach the silver screen once again, and the timing couldn’t have been better in the franchise’s 50th year. Since its debut in 1966, Star Trek has now spawned thirteen movies and six television series, with another due next year from Hannibal’s Bryan Fuller. It’s an impressive pedigree for a franchise whose humanistic science fiction (which retains more of a niche appeal than mainstream Star Wars), manages to keep entertaining and surprising us after half a century.

Star Trek Beyond is the third instalment of the rebooted movies, masterminded by J.J. Abrams, who now steps aside for Justin Lin (Fast Five) to direct, but remains as producer to guaranteed Beyond’s continuity with the previous two movies. 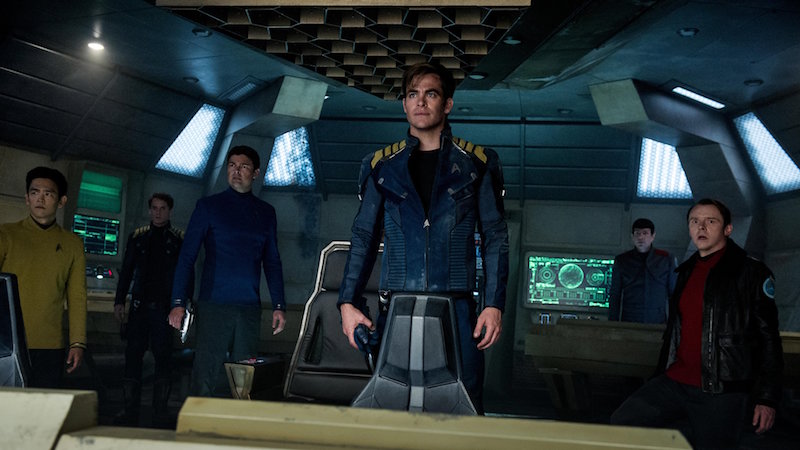 I’ve never been a Trekkie, but I’ve managed to catch some of the TV episodes and a few of the movies with the Star Trek: The Next Generation crew. What’s always felt great about Trek is its delicate balance between humanism and stirring adventure. Star Wars brings familial tragedy and classic mythology into a space milieu, while Trek is a pioneering journey through the universe that can be both campy fun and surprisingly philosophical.

This new movie finds the Enterprise three years into a five-year exploratory mission the crew embarked upon at the end of Star Trek Into Darkness. The long time spent travelling through space is starting to weigh heavy on crew morale, however. Commander Spock (Zachary Quinto) and Uhura (Zoe Saldana) have split up, Sulu (John Cho) misses his husband and their daughter, but it’s Captain Kirk (Chris Pine) who’s seriously considering quitting his role and handing the ship over to Spock. 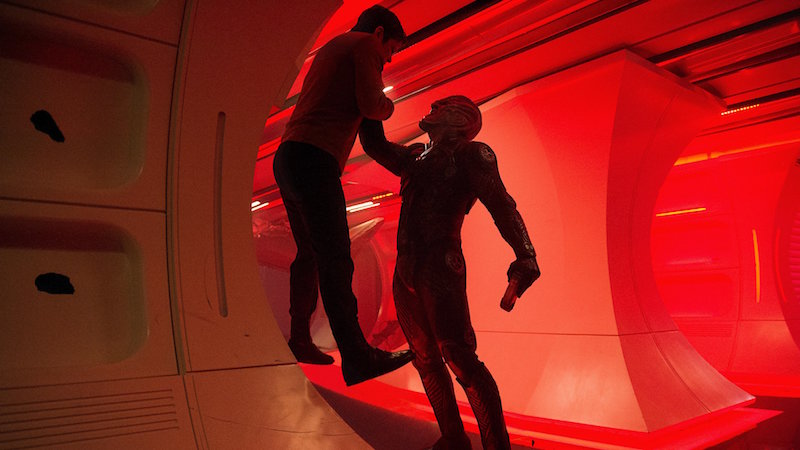 When the Enterprise crew take a momentary break from their voyage at Starbase Yorktown, to replenish supplies and allow the crew a short break, Kirk applies for a Vice Admiral position, but his career crisis is quickly put on hold. An alien woman in an escape pod seeks asylum in Yorktown and asks for help saving her crew, claiming her ship is stranded in a nearby nebula. Kirk’s crew come to her aide, but after approaching the nebula they’re attacked by a swarm of miniature vessels that fatally damage the Enterprise.

The attack is led by Krall (Idris Elba), an alien warlord keen to get his hands on an artifact the Enterprise recovered during one of its recent missions. The Starfleet crew is split and dispersed across the nebula, so they have to figure out what Krall’s agenda is and stop him, while also finding a way to escape the nebula without the Enterprise. The mission is tough, but help is provided by Jaylah (Kingsman‘s Sofia Boutella), an intrepid young alien who suffered the same fate and lost her family in the process. 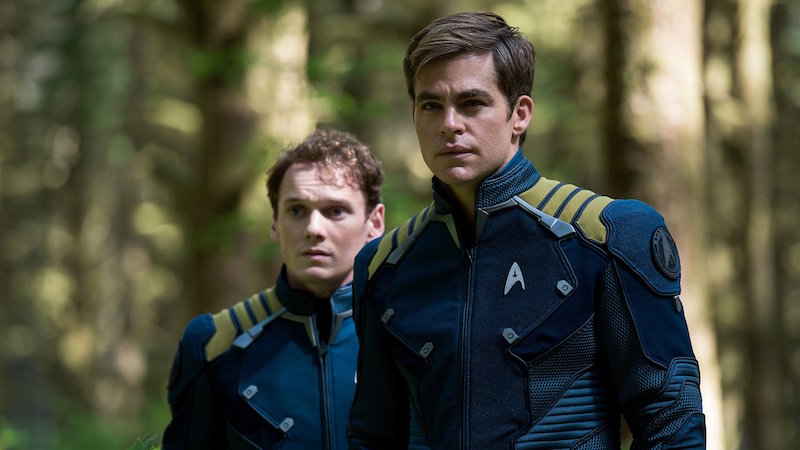 Predictably, with Justin Lin in the captain’s chair, the action is ramped up for Beyond, but to everyone who complained about the first trailer’s ‘Fast and Furious in space’ vibe, you can relax. The bombastic action is never gratuitous but instead organic to the story. Plus, given the huge changes that occurred in the writing department, it’s clear the studio wanted to deliver something with mass-market appeal, and they chose the right director for the job.

Abrams’ legacy is not lost, however, as his cast are as dependable as ever; delivering great chemistry, camaraderie, and comedic wit. Thematically, the film is thinner than the previous instalments, but Simon Pegg (returning as Scotty, but also co-writing with Doug Jung) is clearly aiming to recapture the feel of the original 1960s series and combine it with a modern tempo.

Star Trek Beyond doesn’t bring anything new to the table, but it’s a welcome blast of old-fashioned summer fun—a swashbuckling romp filled with heart-pounding action and a perfect cast. It’s hard to watch the film and not feel a lump in your throat every time Anton Yelchin appears, especially if you’re also a fan of the extremely talented young actor outside of his role as Chekov. Tragically killed in a freak accident at his home, mere weeks before Beyond’s premiere, Yelchin is able to put a smile on your face in every scene. As, indeed, the film does as a whole.