Lynne Ramsay’s You Were Never Really Here is a film designed to be felt more than fully understood. This is the definition of a mood piece, and it’s an intense and affecting one. It’s a brutal kidnap thriller that challenges expectations and rarely gives clear answers. It boasts an incredible performance from Joaquin Phoenix, a bracing and discordant soundtrack, and stunning cinematography by Thomas Townend. It’s a film many will have missed during its brief theatrical release, but it’s well worth your time.

The plot follows Joe (Phoenix), an ex-Marine who’s since become a brutal enforcer. He takes jobs retrieving kidnap victims all around the US, and is clearly carrying a lot of trauma, depression, and pain around with him. Flashbacks to Joe’s past reveal haunting memories that make it apparent he’s a damaged person. In the beginning, Joe returns home to New York where he takes care of his ageing mother, but is soon hired to rescue a Senator’s daughter from a child sex trafficking ring in the city. It’s dark stuff. 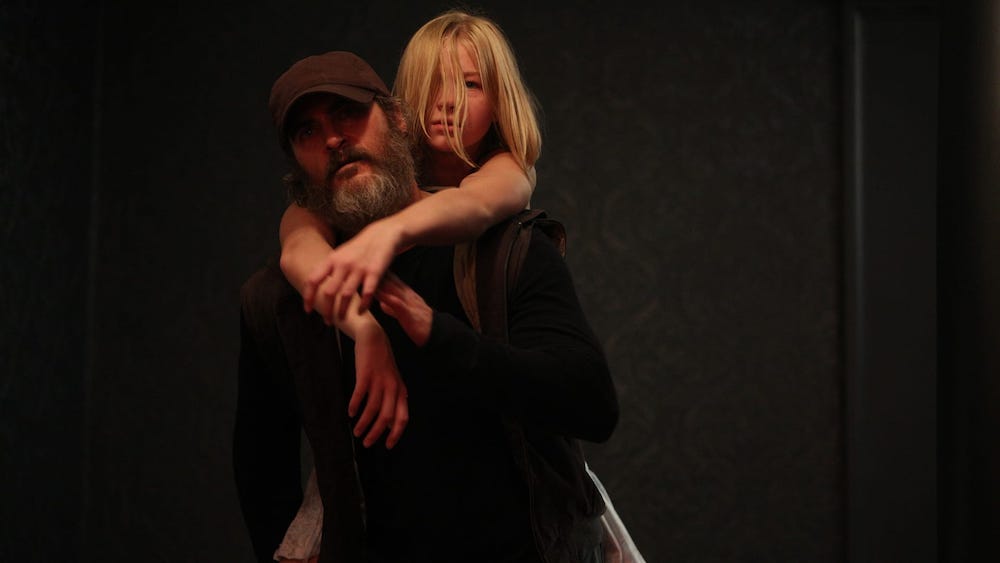 The action takes place over a taut and well-paced 90-minutes. The story pushes Joe to the edge, to see sees how he reacts when his situation spirals out of control, revealing a shocking conspiracy behind what he’s been hired to do. Joe’s an unforgiving hired gun, who seriously hurts those who get in his way. His weapon of choice is a hammer, and watching him wield it’s just as vicious and bloody as one would expect.

You Were Never Really Here is a violent film, but that’s unsurprising for a story during which we know we’ll see multiple assailants conked over the head with a hammer, along with shootings and knifings. What’s fascinating, though, is how Ramsay demonstrates restraint and how often she’ll show the moments before or after the acts of violence. This forces us to picture what’s happened in our minds…. and what your mind imagines is often more terrifying and traumatising than anything the film could show. 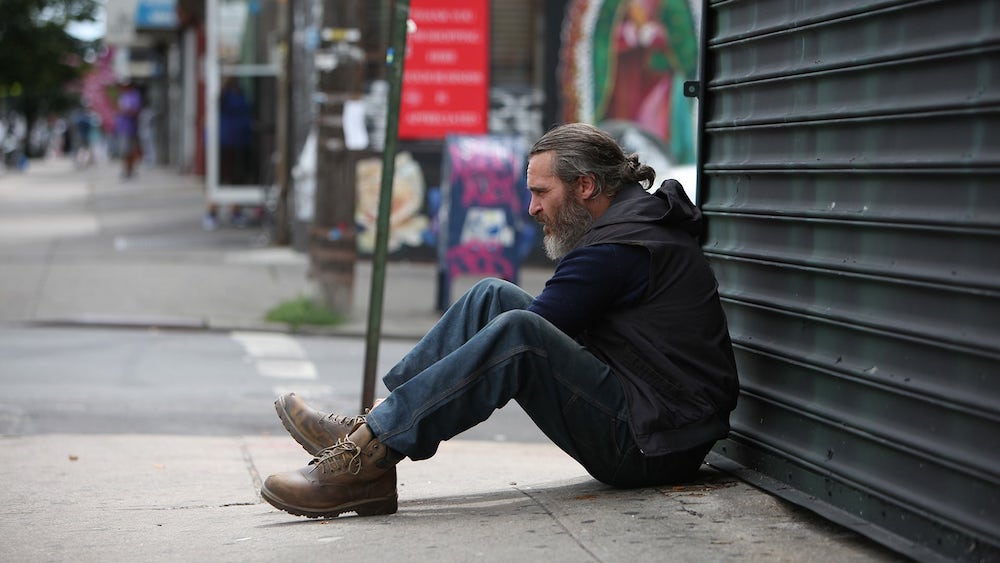 What makes You Were Never Really Here work is the committed and hypnotic performance from Joaquin Phoenix, who’s at the heart of everything. Joe is a lumbering and powerful figure with instant presence, and Phoenix conveys so much of his emotion and power in silent moments. He’s a man with a traumatic and mysterious past that informs his present-day actions. We don’t need to have every detail of his life explained to get a sense of who he is.

Joe’s somebody with a mix of complex traits. We see him be funny and kind with his mother, but also display paranoia and aggression towards others. We’re shown the trauma and fear Joe carries around with him has resulted in frequent suicidal thoughts, and that he channels his anger and frustrations into his work. All the complications around this lead character make him feel more dimensional and realistic, and it obviously helps that Phoenix’s performance is so captivating. 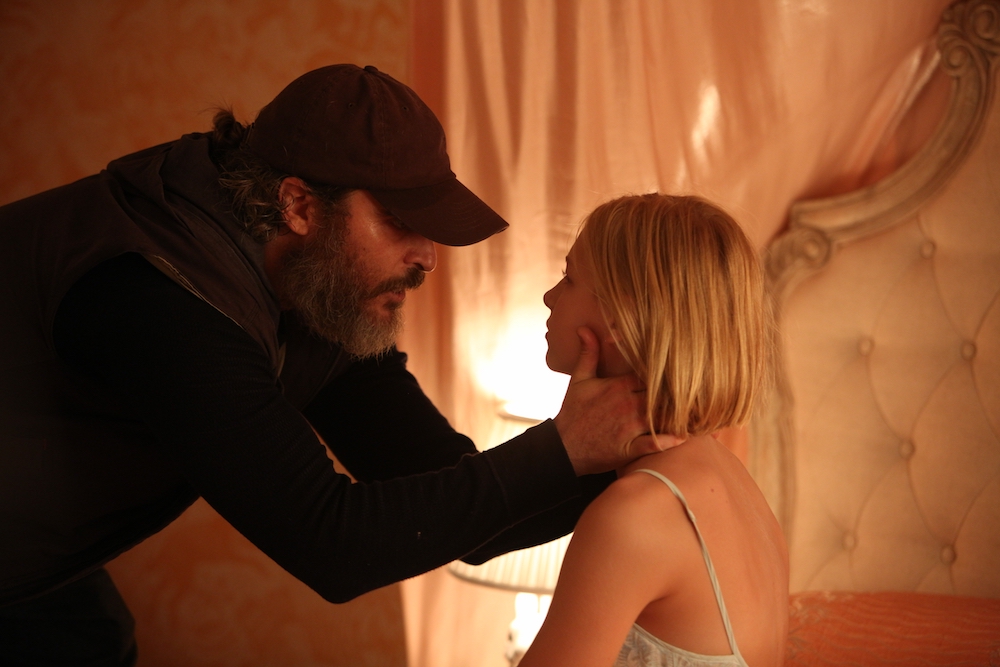 The story is based on the Jonathan Ames’ novella of the same name, and it deals with a number of dark and bleak themes. This narrative is intense and the plot goes to places that aren’t easy to think about or see onscreen.

Something that makes the darkness palatable is the sensational cinematography. Just like in Ramsay’s tremendous We Need To Talk About Kevin, it’s unsurprising to see that this film is low on dialogue and prioritises striking and memorable images. The music and sound design are both also big parts of why this whole film is so effective. The score from Jonny Greenwood is a disturbing and eerie piece of work that heightens the agonising tension and fear in the movie. 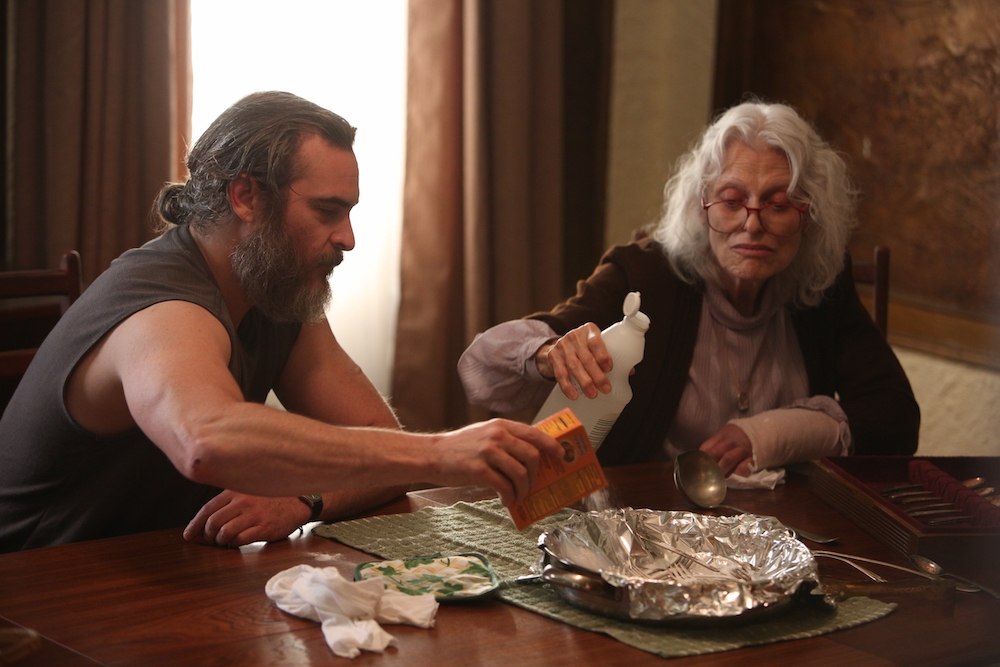 Lynne Ramsay’s a filmmaker whose work we need to see more often. She has an uncompromising approach, and tells tales that are known for dealing with difficult and challenging themes. Hollywood needs to trust she can make exceptional movies, rather than getting into battles with her over creative control. The Scottish director has a reputation as a difficult person with a strong vision, and she might not always gets on with fussing producers, but her films tell remarkable and powerful stories.

The controversial situation with Jane Got A Gun (2016), which Ramsay abruptly quit on the first day of production, is still one where we don’t know all the details of. Even so, what we do know is she works extremely well with actors and makes excellent films whenever she has full control. It’s surprisingly been 6 years since We Need To Talk About Kevin, and star Ezra Miller put it best when he said Ramsay’s next movie really shouldn’t take as many years to get made. 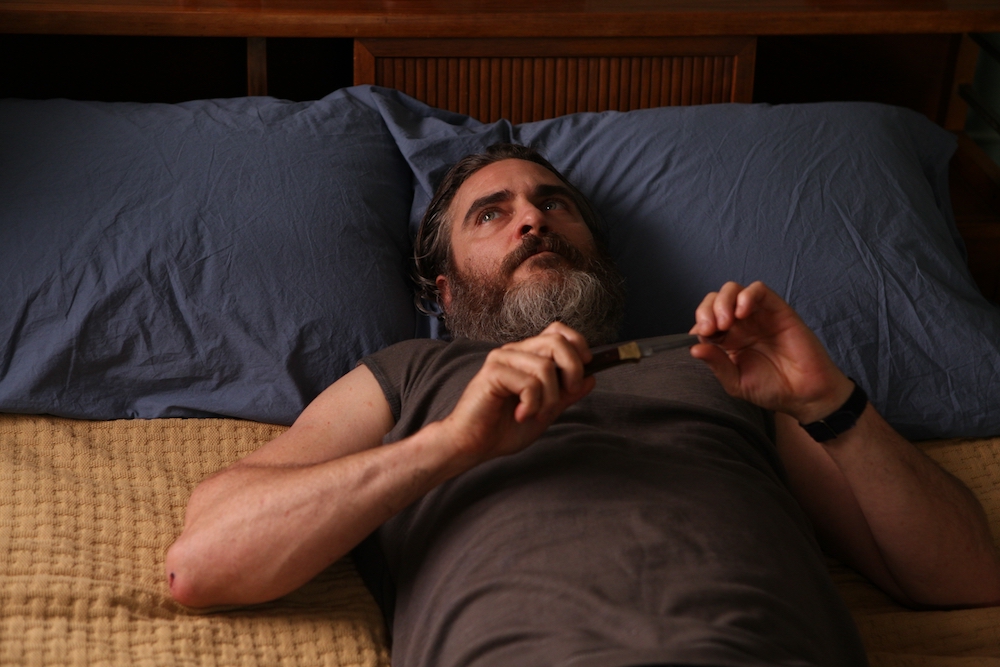 For whatever reason, Ramsay likes to explore themes like death, suffering, and grief, and she’s really good at it. While exploring the life of a damaged man is hardly the most novel of ideas, it does feel like she brings a lot of new elements to the table, along with a lot of ambiguity about how we’re supposed to feel. All we understand is that Joe deals with his demons through violence and helping others. He’s a flawed man, and definitely one with monstrous qualities, but the powerful figures he’s faces in this movie are the real monsters.

You Were Never Really Here is a film that shouldn’t have flown under the radar as much as it did. It’s an incredible thriller that features what may possibly be a career-best performance from Phoenix and demonstrates exactly why Lynne Ramsay is a filmmaker to be celebrated. It’s tense, challenging, and mesmerising. This sort of movie isn’t for everyone, but it’s astonishing and should be recognised as a compelling character study dealing with dark and interesting material.