A Swedish whaler is out for revenge when he finds out that a greedy oil man murdered his father for their land.

The Western’s a genre that was once huge business in the movie industry. From the 1930s to the 1960s, there were so many stories about the western frontier it was hard to keep up with them. Stars like John Wayne and Clint Eastwood became synonymous with the genre, as well as names like John Ford and Sergio Leone, who cemented their legacies by telling daring tales of cowboys and gunslingers. America loved these heroes; rough around the edges and fallible, but people you could believe in. Everyone’s heard of Once Upon a Time in the West or The Good, the Bad and the Ugly, but what about the many hundreds of other movies released over the years? Not all of them created stars or became iconic, yet many had something to offer. Arrow Academy’s latest offering, Terror in a Texas Town, is one such film, putting a film noir twist on your typical Western, and thus serving up something well worth your time.

Interestingly, Terror in a Texas Town was written and made around the time of the Hollywood Blacklist, when many in the entertainment industry were denied employment due to suspected Communist ties. The world was paranoid about communism during the 1950s, which resulted in screenwriter Dalton Trumbo being ‘blacklisted’ for refusing to testify to the House Un-American Activities Committee in 1947. Consequently, Trumbo had to use pseudonyms and credit his work to others to keep busy. That background alone gives Trumbo’s script for Terror in a Texas Town an added interest for film historians. Throw in a retiring director in Joseph Lewis, and another blacklisted talent in actor Nedrick Young, and you’ve got a project coming from a lot of people with nothing to lose and everything to gain. 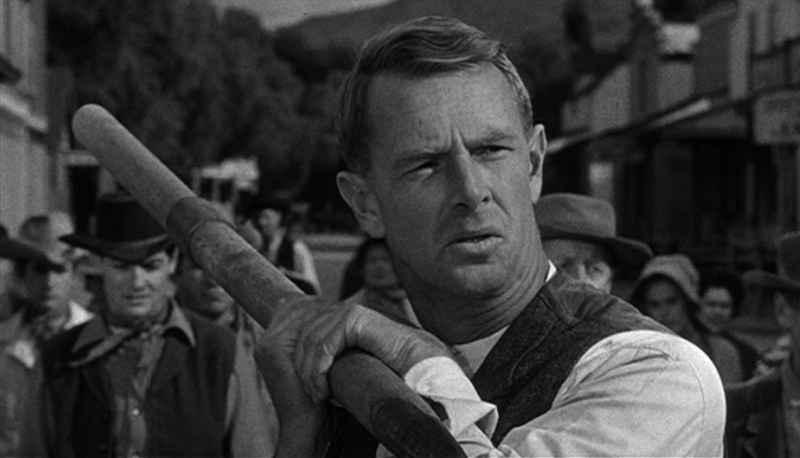 Terror in a Texas Town doesn’t focus on being a big-budget spectacle, instead aiming to be more imaginative and stylistic than your average Western. McNeil (Sebastian Cabot) wants it all and won’t stop until he gets everything in Prairie City, enlisting the help of Johnny Crale (Young), who just happens to be very useful with a gun. Together they make a successful team, looking to take over various farms where they know they can make money, and eventually this leads to the death of an ex-whaler who desperately attempts to protect his land to no avail. This draws in his son, George Hansen (Sterling Hayden), to avenge his father’s death and events inevitably lead to a big showdown. Nobody can say that Terror in a Texas Town pushes the envelope in terms of storytelling, but what differentiates it from other Westerns is its direction and visual innovation.

I can only imagine Terror in a Texas Town has achieved a somewhat cult status over the years. It certainly has an eccentricity to it that would delight admirers of quirkiness. There’s a bleakness to the story that you don’t get in many Westerns, with an unease that’s difficult to replicate. It’s the ruthlessness of Crale that makes you concerned for Hansen, but there’s a stubbornness both men share that leaves you wondering just who will win by the end. There’s enough doubt left in the viewer’s mind to end up with an interesting resolution, especially considering how dark the film has felt up to that point. The 80-minute runtime allows enough room for the tale to play out without overstaying its welcome, too.

Cabot, Young, and Hayden all give acceptable if not fantastic performances that carry the story well enough. There’s a reason why Terror in a Texas Town hasn’t gone down in history as one of the genre’s best, which is that it’s evidently not, but what it attempts to do is very admirable. It’s hard to argue against this being one of the most memorable Westerns of the ’50s. Trumbo’s writing, combined with Lewis’ unusual directing, makes for a film that’ll grab your attention and keep you watching. Where else would you see a man with a harpoon take on a gun-toting villain?

Arrow Academy has served up another interesting addition to its lineup, as this is definitely worth checking out if you’re a fan of film noir and Westerns. Disappointingly there isn’t a huge amount on offer in terms of extra features, as it would’ve been interesting to hear more about the time period and the politics behind the movie, but that doesn’t stop Terror in a Texas Town being a truly unique addition to anyone’s cinema collection.