Based on a plot to rob a famous NASCAR speedway, Steven Soderbergh’s last foray into the great American backwater, Logan Lucky (2017), seemed a guaranteed US box office hit, until it was cast. Channing Tatum, an Alabama native, did a creditable Carolina accent that helped him pass as a backwoods hick. Adam Driver and Daniel Craig did not. Their accents were more tortured than the folks in Guantanamo Bay, and since Driver’s a Californian and Craig’s a Brit, the target audience perhaps felt ridiculed, so didn’t come out to support “Ocean’s 7–11” in enough numbers.

This time around, working in a different genre, targeting a completely different audience, Soderbergh’s looking for tension, thrills, and chills, instead of laughs. And that’s exactly what he delivers in his new release, Unsane, written by Jonathan Bernstein and James Greer. The plot follows a young American woman, Sawyer Valentini (Claire Foy), whose life’s been turned upside-down by a tangential acquaintance—a man she barely knew, and who barely knew her, but who refused to take no for an answer. 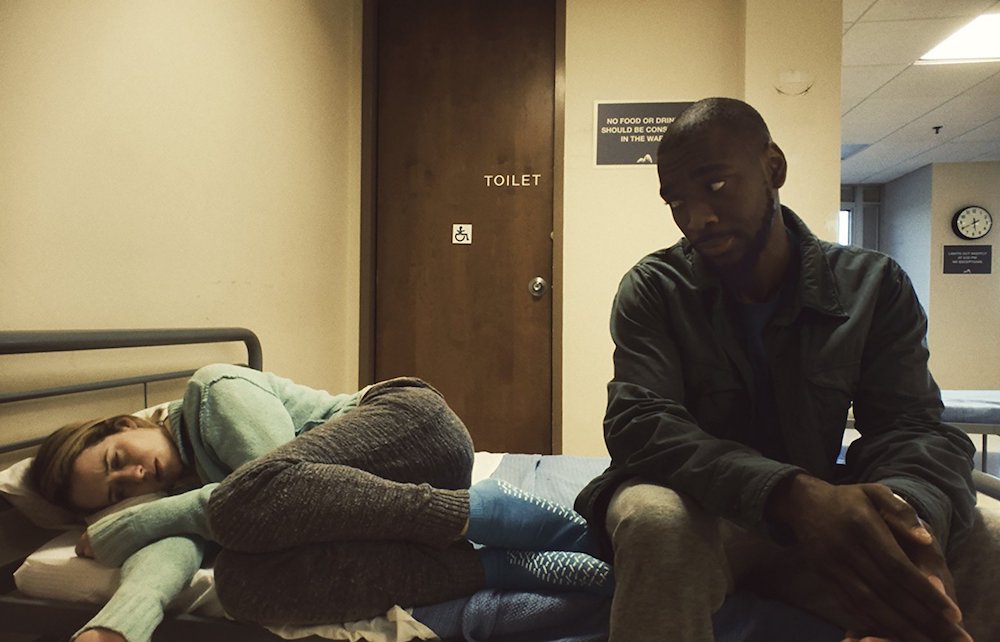 Taking the detailed advice of a police detective who specialises in stalkers and their victims (an uncredited, underplayed Matt Damon), Sawyer abruptly abandons her old life and relocates to a new city, hundreds of miles away. She ditches old friends, avoids making new ones, and shies away from professional and romantic entanglements. All in an effort to disappear from her stalker’s radar.

Which is where we meet Sawyer, already well into her meticulous efforts to start a new life, working a new job in a new city, having left everything and everyone behind, including her hurt and mystified mother. Her life is more secure as a result of her precautions, but she’s emotionally isolated with nobody to trust or talk to. And since she must create no attention and leave no public record, she can’t afford to make any mistakes… and so the pressure builds. 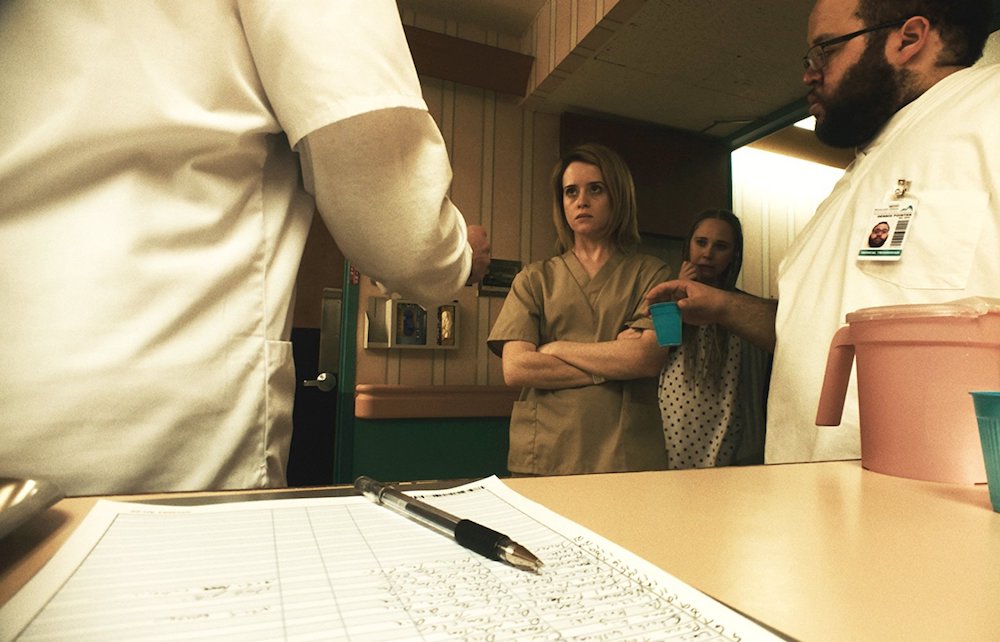 To combat her stress, Sawyer enrols in a counselling program for fellow victims of stalking. She signs the boiler-plate paperwork and reveals her precarious emotional state to a woman whom she believes to be a sympathetic counsellor. By the time she realises her mistake, Sawyer finds herself involuntarily committed to a private mental health facility with no legal recourse, where she appears to be detained with her own stalker.

Is the hospital keeping her locked up for financial reasons, to drain her insurance, or could her stalker somehow have found her and planned it all, or has the tension finally pushed Sawyer over the edge… making her go crazy? The script eventually gives up its secrets, but this is a horror/thriller, so even once Sawyer’s mental state seems to have become clear, what will become of her and everyone else remains in doubt until the very end.

Claire Foy doesn’t shine so much as shimmer as Sawyer Valentini, but then, she’s not meant to radiate. She’s supposed to remain a mystery, a question, to leave us doubting what we know. Since she shines at work, but not so much in her life afterwards, she leaves us question who the real Sawyer is: a competent office worker, or a volatile and irrational woman after clocking off?

Foy convinces as an intelligent, passive-aggressive woman; alternately helpless and cleverly manipulative, maybe even dangerous, who ends up trapped, justifiably or not, doing whatever she must to survive. 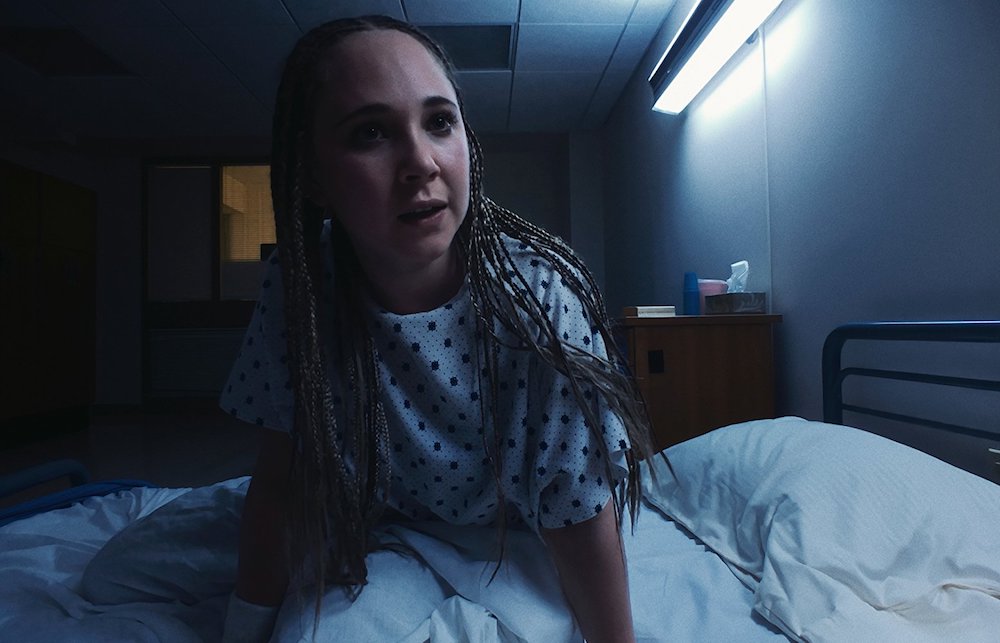 Foy’s not in this alone. In a restrained performance, Joshua Leonard (The Blair Witch Project) holds back enough to keep us guessing whether he’s the sympathetic and hard-working orderly he appears to be, or the insanely obsessed stalker Sawyer claims he is.

Juno Temple (Wonder Wheel) is alternately irritating and physically threatening as Violet, one of Sawyer’s fellow patients who seems to truly belong in an asylum. Violet seems intent on, for whatever reasons, of doing everything she can to make Sawyer’s life both tense and miserable. In spite of her aggressive behaviour, Temple stops her Violet becoming totally unlikeable. She’s a sympathetic but disturbed woman whom we have no doubt is herself a victim, if nothing else, of her own mental wellbeing.

Aimee Mullins (Stranger Things) plays the appropriately cold, frightening Ashley Brighterhouse, one of those anonymous health care executives whose existence we’ve all suspected, and whose single-minded efforts to maximise profits are undeterred by her patients’ best interests. 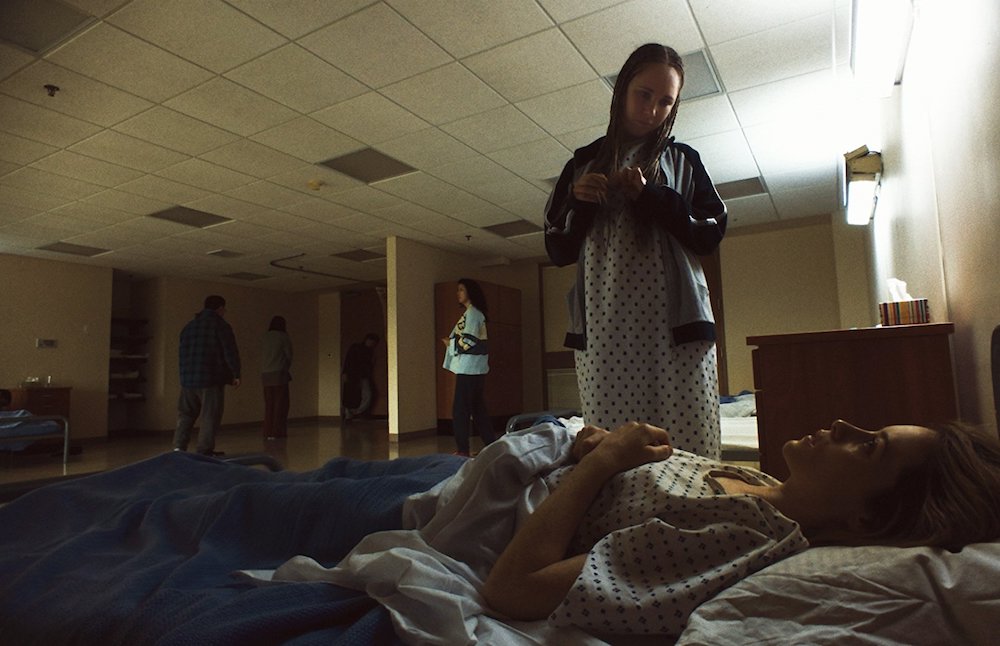 Jay Pharoah steps beyond the comedic roles we’re used seeing him play in Ride Along (2014) and in Saturday Night Live as Nate Hoffman, an abnormally bright rehab patient with secrets. Nate seems to be very aware of what’s going on around him, and is genuinely concerned for both Sawyer’s welfare and survival. Pharoah’s transition from generating laughs to drama is a stunning success here, and if he continues taking serious roles we’re likely to see his name closer to the top of the bill.

Soderbergh shot this little gem in secret using an iPhone 7S with FiLMiC Pro; a technique that works fantastically well for the film’s many claustrophobic interiors, with the phone’s grainy patina enhancing the drug-induced mental fog and institutional gloom in which our heroine lives. The iPhone comes up short in the outdoor scenes, where its fixed lens and limited digital options fail to deliver the depth we’re accustomed to. Images appear flatter with less colour than professional movie cameras would capture. In these cases the iPhone detracts from rather than adds to the mood. 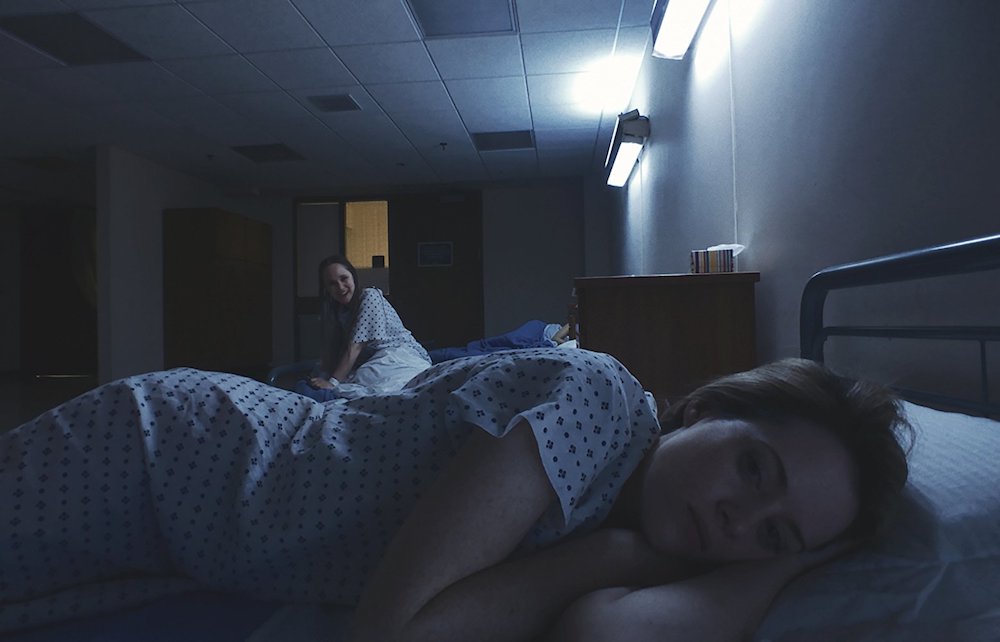 However, by using an iPhone Soderbergh not only achieved almost instantaneous set-ups while filming, he was able to edit Unsane on the go, editing digital files in a hours rather than days—key to achieving the cost savings which were part of the exercise. The production budget for Unsane was reportedly $1.5 million, and if that number turns out to be accurate it’s remarkable what Soderbergh accomplished for so little, using top-line industry talent. It may push the industry in this direction when it comes to low-budget experimental fare.

In spite of his success, Soderbergh’s not the first to use consumer tech for the cinema. Sean Baker shot his Sundance favourite, Tangerine (2015), using an iPhone 5S with an anamorphic adapter to achieve film’s widescreen format. Tangerine’s production cost was a paltry $100,000.

The digital revolution continues unabated. Modern smartphones already offer better images and options than Soderbergh’s iPhone 7 did. As small digital cameras continue improving both image quality and lens options, their use will proliferate, and given the technical success of Unsane there’s no doubt we’ll see more movies shot on consumer gadgets. This will then allow more aspiring filmmakers to bring yet more diverse stories to bigger audiences.