The premise of one half of a married couple harbouring dark secrets is a cornerstone of the thriller genre. It’s fuelled so many successful works of fiction over the years—from Hitchcock’s Suspicion to Adrian Lyne’s Fatal Attraction, and countless others—the so-called ‘marriage thriller’ is recognised as a sub-genre in itself.

It isn’t hard to work out why. The notion that our partner isn’t the person we think they are taps into deep-seated, life-shattering fears. If you can’t trust the one you love, then who can you trust? Despite its ubiquity, the marriage thriller can still work wonders when intelligently handled. For the most part, Peter Moffat’s six-part BBC thriller Undercover exploits its premise with cruel precision. 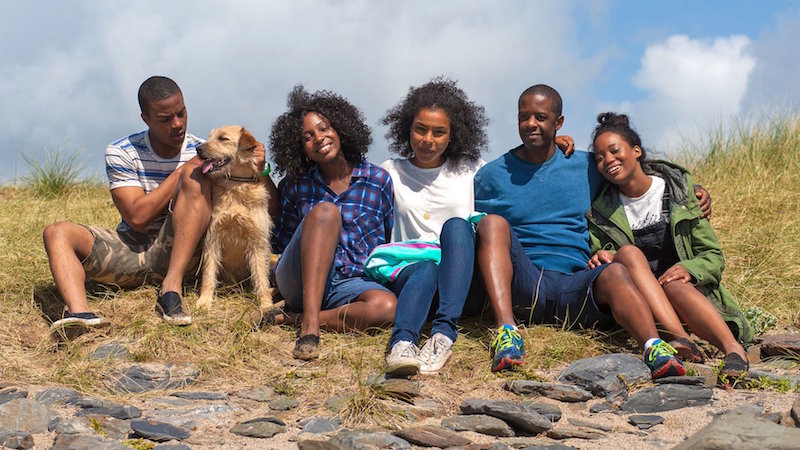 Moffat, a former barrister, is renowned as UK TV drama’s leading legal eagle. Popular shows such as Criminal Justice, Silk and North Square—for all their occasional lurches into melodrama—have cemented his reputation as a writer whose explorations of the criminal justice system wear a grip-tight ring of authenticity. Undercover continues in that uncomfortable vein.

A taut study of guilt, corruption and miscarried justice, it stars Sophie Okonedo as Maya, a highly successful barrister on the verge of becoming Britain’s first black Director of Public Prosecutions. Her husband is Nick (Adrian Lester), an apparently successful author of crime fiction, who, unbeknownst to Maya, is also an undercover cop who met and fell in love with her in the 1990s, when he was tasked with investigating her involvement with Michael Antwi, a charismatic black activist. (That Maya and Nick look the same today as they do in the ’90s flashbacks requires an allowable suspension of disbelief). Targeted as an enemy of the state by the British government, the death of Antwi while under police custody is one of Undercover’s major through-lines.

Somehow entwined is the story of Rudy (24′s Dennis Haybsert), a Louisiana black man on death row. Maya, fiercely idealistic and compassionate in the way we wish all real-life lawyers were, has spent 20-years on a moral crusade to rescue him from execution. Accused of murdering a white politician, Rudy’s innocence or guilt is initially less important than the issue he represents. All civilised people agree that the death penalty is barbaric, but Moffat attacks his argument with that trademark blend of informed research and righteous indignation. 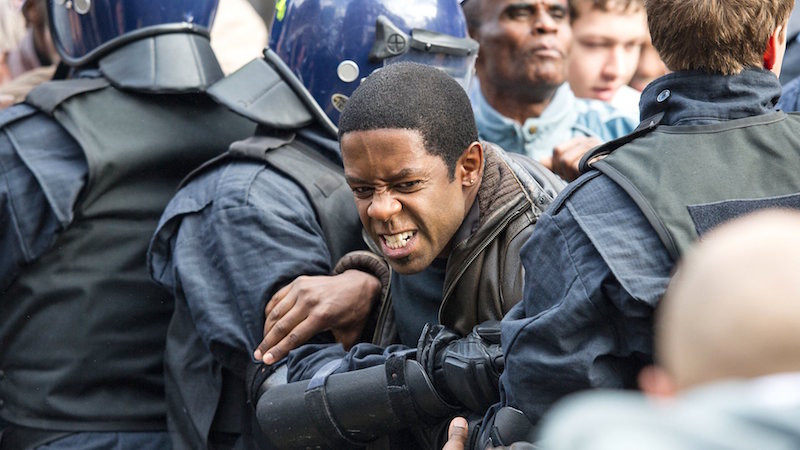 When Rudy’s lethal injection is botched, he’s left barely alive and in unbearable agony. The scenes of prison medical staff trying to finish the job by drilling into his bones are an early indication that Undercover won’t pull any punches. Hardly your standard Sunday evening BBC fare.

Admittedly, the Louisiana scenes are slightly tainted by a nagging sense of the BBC trying, not altogether convincingly, to emulate a sweaty John Grisham legal drama. The southern accents draw undue attention to themselves. Fortunately, the storyline is strong enough to paper over that crack.

Meanwhile, back in London, a reluctant Nick is blackmailed by his old handlers into reigniting their investigation into Maya’s activities. Represented by a shadowy group of Home Office politicians and ‘phantom’ fixers—chief among them Derek Riddell’s sinister Scotsman—the establishment are ardently opposed to Maya becoming DPP. Is it because her unyielding integrity represents a threat to the clandestine status quo, or does their opposition run deeper than that?

As Undercover gradually reveals itself as a conspiracy thriller on a frightening political scale, one can’t help being reminded of Hugo Blick’s The Shadow Line. At its best, Moffat’s latest drama matches that cult classic in terms of violent suspense, skin-prickling twists and pessimistic horror. 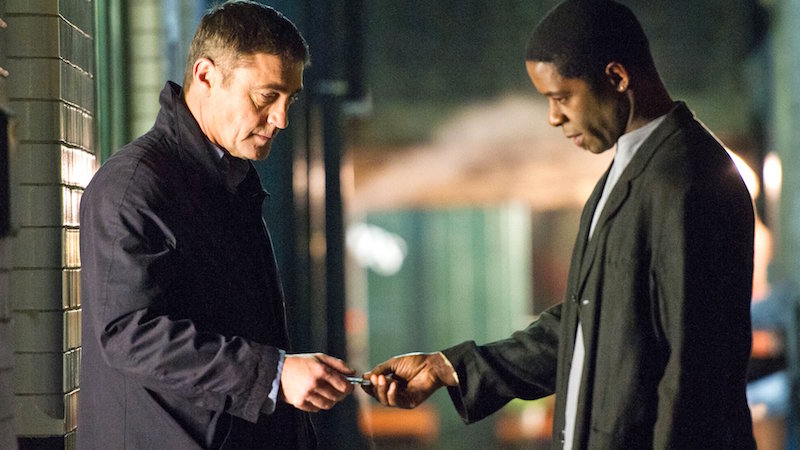 Initially inspired by the Stephen Lawrence case, Undercover tackles, unflinchingly, the explosive issue of institutionalised police racism and government cover-ups. But Moffat’s command of thriller conventions ensures that it rarely feels like an earnest piece of moral grandstanding. It’s an issues-led drama which also functions as a gripping piece of entertainment; the two aren’t mutually exclusive. Neither imperative cancels out the other.

Like Jed Mercurio’s third series of Line of Duty, it emerged at a time when, in the wake of the ongoing VIP paedophile scandal and the recent Hillsborough findings, our already threadbare trust in authority took yet another savage beating. It’s not so much torn from the headlines as ripped out by the teeth.

It also explores the psychological toll of deep undercover police work, mainly through Nick—a man cursed by his ability to lie convincingly—but also via Abigail, a colleague whose nightmarish field mission leads to a crack cocaine addiction.

The heart of Undercover is, of course, the relationship between Maya and Nick. A paragon of honesty married to man living a lie could’ve easily came across as heavy-handed in lesser hands, but Moffat explores every emotional nuance of this set-up with the utmost conviction. He’s particularly adept at writing electrifying confrontations, where dialogue and silence are of equal importance: a gift for actors of Okonedo and Lester’s calibre. 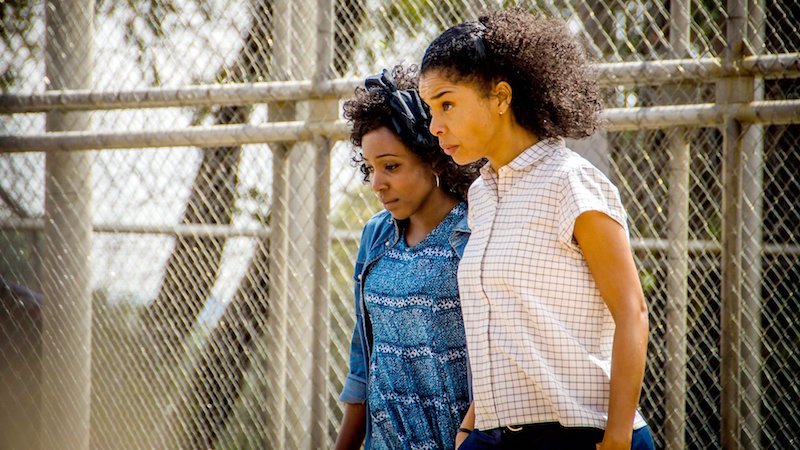 The ambiguities of Nick’s motivations are particularly interesting. A sincerely loving husband and father, he’s also an arch manipulator; his miasma of lies are designed to protect his family as well as himself. Lester handles this difficult role with canny assurance. Okonedo is equally impressive. In what must’ve been an exhausting performance, she’s utterly convincing as she runs the gamut from trust and compassion, to shock, heartbreak and fury. It’s a tremendous turn, full of palpable humanity and grit.

Unfortunately, all that fine work is somewhat undermined by a confused finale. Despite falling prey to a few unlikely contrivances along the way, the brunt of Undercover works because it appears to be leading somewhere substantial. But following the anticlimactic events of episode six, those contrivances aren’t so easy to forgive. Either Moffat painted himself into a corner by spinning too many plates, or it was decided late in the day to leave things open for a possible second series. Whatever the explanation, Undercover fails to deliver on the promise of its first five, riveting episodes.

As is so often the case with thrillers, the journey is more rewarding than the final destination. Nevertheless, it’s quite a journey. An important drama in many ways—not least in its foregrounding of a black family in a primetime British drama; remarkably still a rarity in 2016—Undercover is, flaws and all, a superior piece of work.

Klonopinshop.com is intended for adults and children for the treatment of large and small epileptic seizures, accompanied by monoclinic attacks (twitching of individual muscle bundles), as well as psychomotor crises and increased muscle tone. The drug can be used as hypnotic; it is especially relevant for patients suffering from organic brain damage.