Coming after such an emotional peak, “The Red Angel” suffered in comparison to Airiam’s poignant death scene, despite having a longer arc to make us insanely curious about who the mysterious Red Angel is. Airiam was essentially a piece of eye-candy until “Project Daedalus“, let’s face it, but the episode was masterful in how it made us care about her familiar but enigmatic character, before tearing our hearts out by making it her premature swansong. There was no such excitement in “The Red Angel”, although the reveal of who the time-traveller was a surprise, which I’m grateful for.

Indeed, this episode contained a few big reveals. The titular one seemed underwhelming when Leland (Aaron van Sprang) chose now to reveal Section 31 had been experimenting with a suit capable of time-travel, while engaged a temporal arms race against the Klingons. This endeavour was codenamed ‘Project Daedalus’, who has nothing to do with time. ‘Project Chronos’ would make more sense, but maybe they didn’t choose that because it sounds too much like the Klingon homeworld. ‘Project Daedalus’ is what Airiam mentioned to Michael (Sonequa Martin-Green) last week, and I was immediately deflated by the reveal S31 are behind everything. It does tie S31 closer to the thrust of this season’s primary arc, which is welcome, and it’s not as obvious as just saying the Red Angel is an advanced alien from the future, but it also didn’t strike me as particularly imaginative. I was developing a theory—blown to smithereens this week—that the Red Angel was an “upgrade” of Airiam, the same way the USS Discovery’s probe was improved by whatever/whoever was on the other side of the time rift in “Light and Shadows“. I still think that would have been cooler. 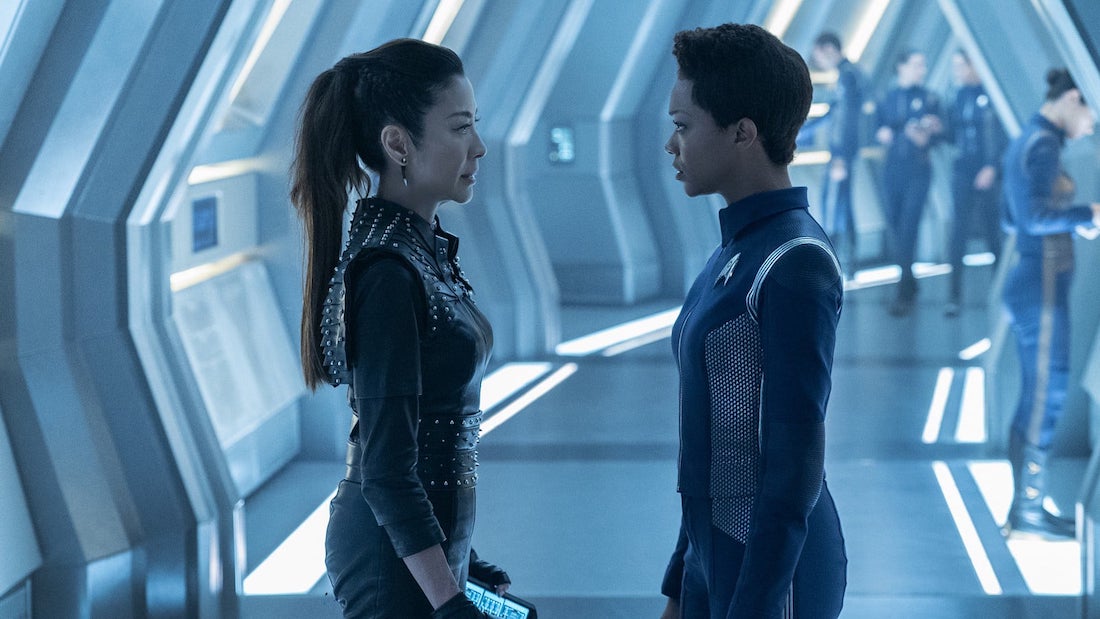 But the actual answer, or so we thought, was that the Red Angel is a future version of Michael herself. Somehow she’s using prototype S31 tech to whizz through time, nudging herself and adopted brother Spock (Ethan Peck) closer to their separate destinies, while finding time to point the USS Discovery towards a few people in need of help. I didn’t expect the Red Angel to be Michael Burnham, as it seemed a bit cliched. The Flash did something similar in season 3 when—spoiler alert!—the metal-suited villain Savitar was revealed to be an “evil” version of Barry Allen from the future.

Fortunately, “Project Daedalus” didn’t fall apart completely when it came to the climax, with Michael agreeing to let herself be killed in a chamber without life support in order to lure out the Red Angel. The thinking is that the Red Angel wouldn’t be able to ignore the ‘Grandfather Paradox‘, so would be forced to rescue her younger self to ensure her own timeline is maintained and she continues to exist. Sadly, my geek brain was already fixating on the madness of Michael being a participant in this plan, as the knowledge she has would become the Red Angel’s knowledge. It would make more sense if Michael wasn’t aware her friends planned to “kill her”. 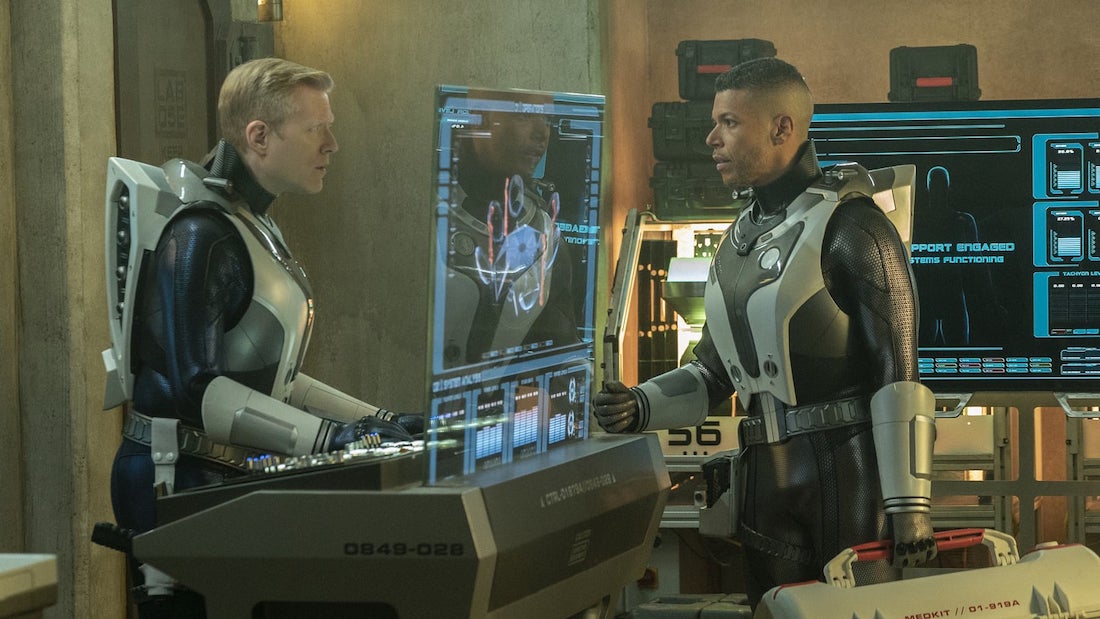 The episode just about made such a silly idea work, with Spock taking a hard line on the plan and refusing to let Dr Culber (Wilson Cruz) resuscitate Michael at the agreed time. Oh, and it also turned out the Red Angel isn’t Michael anyway, it was her “dead” mother. So that cleared up a lot of questions piling up in my head, plus it makes sense the Red Angel would be compelled to act on her maternal instincts. It also opens up more questions about what actually happened to Mrs Burnham, if she didn’t die at the hands of Klingons when Michael was a child. It also sets up an interesting potential conflict, as Georgiou (Michelle Yeoh) now has Michael’s real mother as a rival for her maternalistic feelings towards her.

Sonequa Martin-Green has been the face of Star Trek: Discovery since it launched, and even as season 2’s opened things out she’s remained the “lead character” in many ways. That’s sometimes a detriment because events tend to have to involve Michael, whereas I’d prefer to see other characters get equal screentime and emphasis, but it’s been a while since it felt like Michael was truly at the heart of the story. “The Red Angel” put her front and centre again. 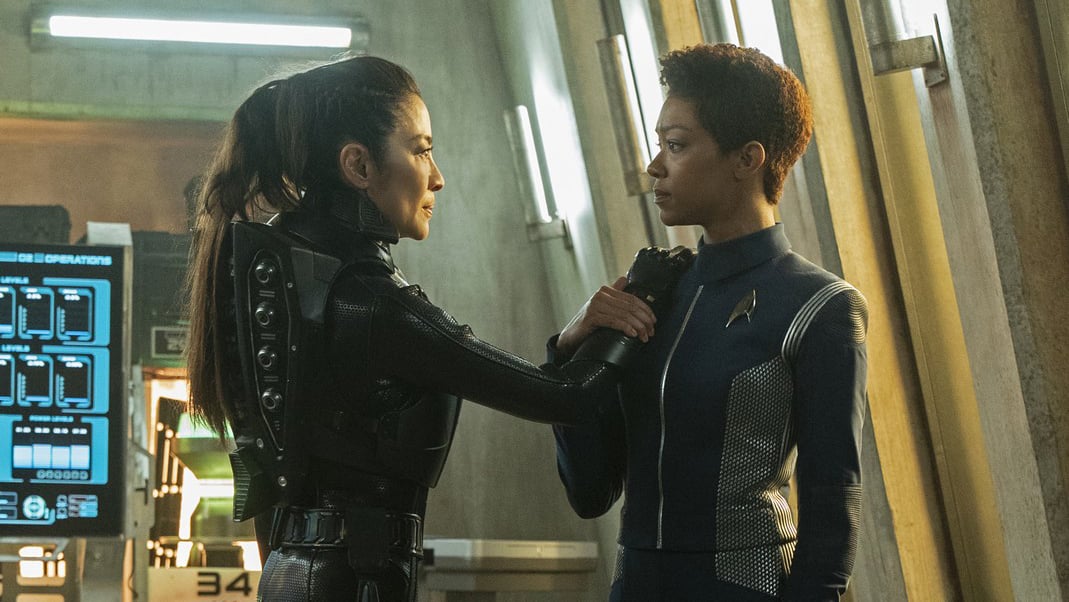 She seems to have rekindled her relationship with Tyler (Shazad Latif), which I’m glad about because those two have good chemistry, and now the Red Angel mystery is touching close to home. Martin-Green is undoubtedly one of the best actors on Discovery so, for that reason alone, it’s good when she has juicy material to play off. Michael’s reaction to Leland revealing her parents were S31 agents and his actions led to them being killed was fantastically done; very moving and raw, with tears flowing and Michael’s voice hitching as she maintained composure before punching him to the floor. I also liked her softening around Spock when he came to see her afterwards and his words proved unexpectedly helpful.

Other areas of the episode were less successful or reminded me of the season’s deficiencies in some respects. Airiam’s autopsy was quite grim, as they deleted her memories to purge her of the computer virus she was infected with, which was segued into an emotionally charged funeral. It was warranted, but perhaps a little overplayed, as there’s still no getting around the fact Airiam was a side character at best who was killed the same episode she got any major screentime. I’d love to have felt for Tilly (Mary Wiseman) giving her eulogy but, for audiences, her relationship with Airiam isn’t something we’ve spent enough time on. She’s not the Geordie La Forge to Airiam’s Data. 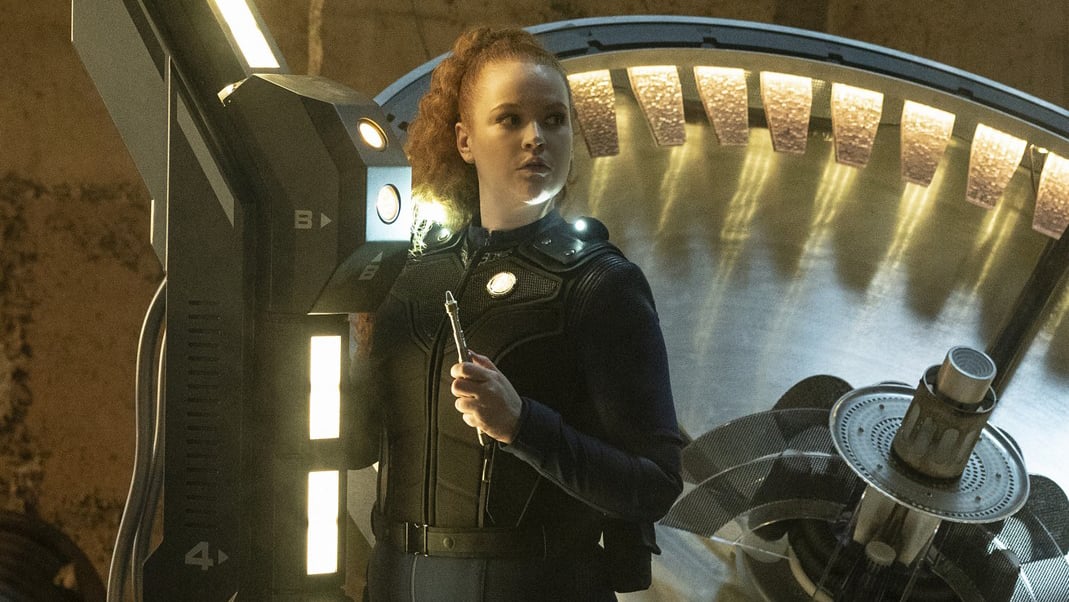 Still, while the big reveal of the Red Angel fell oddly flat, it’s personalised it and I’m intrigued to see where things go next. It’s also great they cast Sonja Sohn (The Wire) as Michael’s mother, as she has a very strong resemblance to Sonequa Martin-Green. I actually thought they’d cast Sohn as an older Michael, rather than apply prosthetics to Martin-Green and make her play both parts, but then Michael said “mom?” But maybe the Red Angel we’re seeing is Michael’s mother from a point before she was killed? But if so, couldn’t Michael change her own timeline by revealing to her mother how her parents get killed? That would mean Michael would never be adopted by Sarek, however, which is too big of a ripple in the timeline to justify. Although it would be amusing if they did it, as it would be the perfect way to erase Michael from Spock’s life and fix the “problem” that Spock in the Original Series never mentioned her.