Having truly confounded his audience, many of whom were aching to see the quirky, cutesy, soap opera pastiche version of Twin Peaks they loved in the 1990s at the heart of this continuation, David Lynch doesn’t spare the horses in “Part 3” of Twin Peaks: The Return. That we’re definitely not in Kansas anymore seems to be the mantra, and Lynch takes many opportunities to celebrate and mock his original creation while pushing it further into unknown, deeply surreal territory.

Special Agent Dale Cooper (Kyle MacLachlan), evicted from the Black Lodge, is hurled through space into a flowering, blossoming purple cloud that engulfs the camera. Lynch has said that this new Showtime series is very connected to Twin Peaks: Fire Walk With Me (1992) and, boy, he wasn’t kidding. The falling through space business we see in this truly odd scene pulls us right back to Laura and Donna’s musings in the film about going faster and faster if you happened to be falling in space.

Coop finds himself in a strange building surrounded by an ocean, before entering a room where an eyeless woman sits by a fire burning in a grate near a numbered machine on the wall that piques his interest. The scene judders and slips, as if time is constantly hiccuping, and ‘someone’ is pounding very heavily on the room’s door, intent on who knows what. This is ‘mother’, apparently, and the woman without eyes, credited as Naido (Nae Yuuki), may be referring to that mother superior of the Twin Peaks universe, Sarah Palmer (Grace Zabriskie).

This ghost in the Lodge helps Coop to escape from a room travelling in space, controlled by a big lever. The lever the woman throws is perhaps a nod to the so-called Man in the Planet who seems to control the boundaries between light and dark by throwing the big switches in Lynch’s Eraserhead (1977). The girl, like Coop, is hurled rapidly into space, falling, falling like the subject of that Julee Cruise song so closely associated with the world of Twin Peaks. 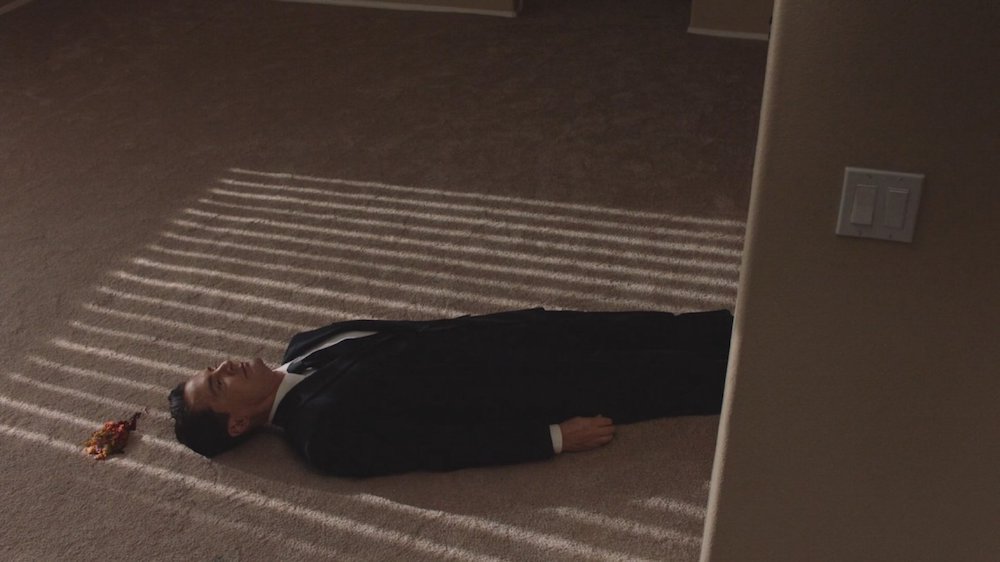 As he stares into space, a ghostly image of Major Garland Briggs (played by the late Don Davis in the original series) drifts by and, just as Charles Foster Kane on his deathbed muttered “Rosebud” in Citizen Kane, he intones to Coop the words “Blue Rose”. Garland was investigating the Black Lodge for the US government and ‘Blue Rose’ was a code name for out of the ordinary cases under FBI Deputy Director Gordon Cole’s overview. It’s a link back to the investigation of Teresa Banks’ murder in Twin Peaks: Fire Walk With Me.

The sequence then achieves its coup de grâce. The American Girl now waits inside the ‘spaceship’, suggesting it’s time for Coop to leave. Her watch is stuck at 2.53pm. The strange machine that has intrigued Coop since he arrived displays the number 3. Is it the appointed time? It seems so as Lynch cuts to the alt-Coop, known as ‘Mr. C’, driving along the highway where his dashboard clock shows almost 3.00pm.

The American Girl is played by Phoebe Augustine who originally appeared as Ronette Pulaski in both the film and CBS TV series. Ronette, you may recall, barely escaped with her own life during Laura Palmer’s ritual murder in Twin Peaks: Fire Walk With Me. She turned up in the first episode of the original series, battered and bruised, wandering across Reinig Bridge into the centre of the hunt for Laura’s killer. Here she advises Coop “when you get there you will already be there.” This might refer to Mr. C but as the episode continues she may also be referring to another person in our own dimension, Dougie Jones.

As ‘mother’ hammers on the door, Coop’s entire body is drawn into and sucked through the machine. It squeezes through a tiny aperture and as Coop disappears down another metaphoric rabbit hole, Lynch adds the physical comedy underscore of watching his shoes plop off the end of his feet, left behind in this mauve hued nightmare of the absurd. 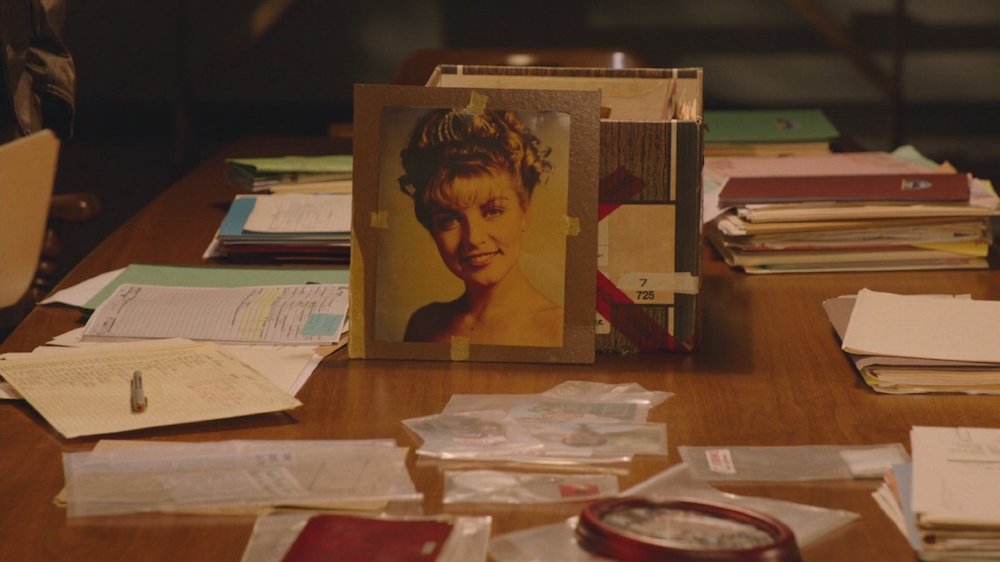 As Coop’s body transfers from the Black Lodge, Mr. C is driving down the highway (the old Lynchian symbol for a journey to everywhere and nowhere) and suffers an attack of ‘garmonbozia’. A Lynchian term for ‘pain and sorrow’, it is eaten by the evil beings of the Black Lodge and its physical manifestation is creamed corn. The escape of Coop forces Mr. C to throw up his garmonbozia, endure visions of the red-curtained Black Lodge, and crash his car. Meanwhile, Coop’s body manifests itself as yet another doppelgänger, replacing the aforementioned Dougie Jones (again played by Kyle MacLachlan), by expressing itself from an electric socket on the wall.

One-armed Mike (Al Strobe) tells Dougie, now back in the Black Lodge, that he was manufactured for a purpose and presumably he’s a decoy to circumvent Mr. C’s return to the Black Lodge. He’s seen wearing the Owl Cave Ring: an occult, mystical object linked to BOB and The Man From Another Place, and the long history of which Twin Peaks’ co-creator Mark Frost chronicled in his book The Secret History Of Twin Peaks.

Laura Palmer wore the ring when she was murdered, it has connections to Native American spirit animals and the forces of the Black Lodge, and is said to protect the wearer from BOB. When Mike removes the ring, Dougie melts, rather like the Witch in The Wizard of Oz, and then explodes into various elements and is transformed into a golden pearl.

If you’re completely lost at this point then it is understandable. 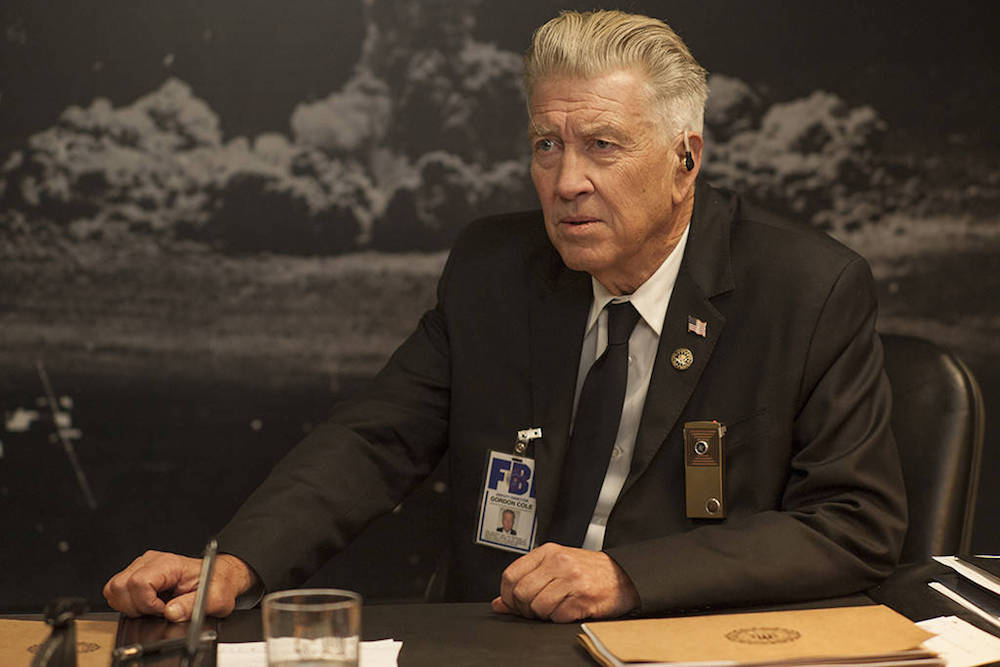 I can imagine that for some die-hard Twin Peaks fans and newcomers alike this is all completely baffling. While it’s certainly confounding, Lynch is pushing the narrative boundaries of what a television series can be. Nothing is certain in Lynch’s work and it’s full of false perceptions of good and evil, mind and body, that obfuscate the true authenticity of the world. This threshold between dimensions has been defined as “a passage between two perceptions of the same space, and a wake-up call for a fuller apprehension of our mind/body realities” in Martha Nochimson’s book David Lynch Swerves.

Twin Peaks has the word ‘twin’ in its title, and different planes of existence and the doppelgänger, are key themes in Lynch’s work. He pulls together his jigsaw of images and sounds with enough emblems of the familiar world to entice us in, to make us guess and question. So far, Twin Peaks: The Return has embraced the dark and brooding, the ridiculous and the horrific, the absurd and the melodramatic. The owls certainly aren’t what they seem and their ambiguous motif marks out the journey between both realities.

Dougie is also a man in great debt and those he owes are keen on taking him out. Lucky for Coop that his old key for room 315 at the Great Northern Hotel in Twin Peaks happens to fall on the floor of the car being targeted by a gunman. He’s out of sight reaching for it as Jade drives him to Vegas. Note the growing use of numbers: we’ve had 15 and 3, 253, 315 and that roll call is joined by 119, shouted by a drug addict living across the street from Jade’s house.

Mr. C, covered in garmonbozia in his wrecked car, is found and taken into custody by the police after one of them reports that his fellow officer is choking on “something bad in this vehicle.” This is intercut with a ridiculous scene, very much in the vein of the original series, back at the Twin Peaks Sheriff’s Department where Hawk (Michael Horse), Andy (Harry Goaz), and Lucy (Kimmy Robertson) ponder the meaning of the Log Lady’s exhortation that “something is missing”. “It’s not about the bunny!” demands Hawk in the conference room, with a ‘Doughnut Disturb’ sign on the door, as Lucy shrieks she knows what’s missing after alighting on an empty pack of said chocolate confectionery.

Many of us would have cast our minds back to Coop’s line “Diane, I’m holding in my hand a small box of chocolate bunnies,” when he carried out the investigation of Laura’s belongings in the pilot episode. Surely, what’s missing is Dale Cooper himself? Or at least his spirit and essence which has taken some rather Alice-like circuitous rabbit hole journeys in the last three episodes. 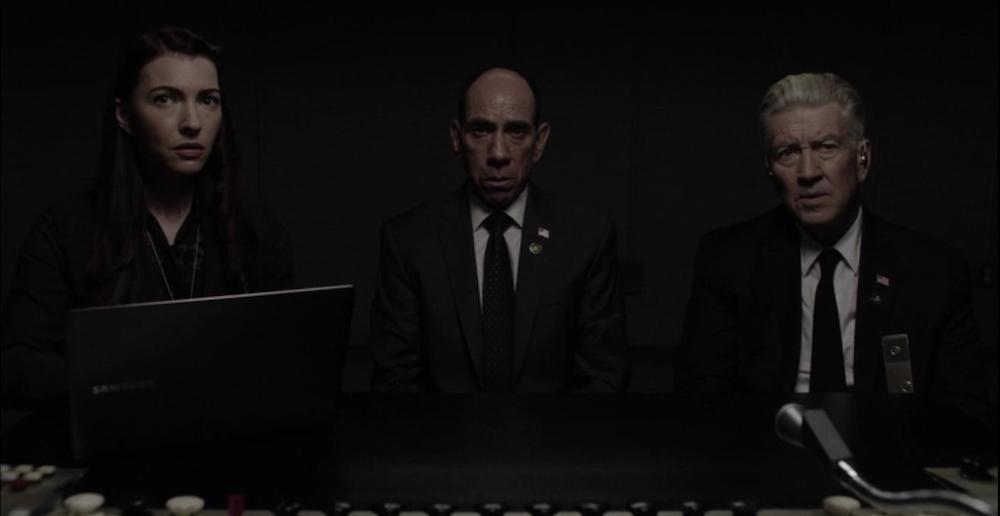 And Dr. Jacoby (Russ Tamblyn) is painting his shovels with gold spray paint. Goodness knows for what purpose he’s doing this, but he’s devised a mean system for the task. Again, this is a scene just casually dropped in, throwing us off-kilter until some meaning becomes evident later on. Lynch works like an alchemist on subconscious levels in these little scenes, setting them up like some strange art installation, adding ingredients until a transformation in meaning is acquired.

At the Silver Mustang Casino, Coop finds he has a penchant for the slot machines or, if we’re being really Twin Peaks with our references, ‘one armed bandits’ as they’re often referred to. Jade’s instruction “you can go out now” evokes a vision of Laura Palmer in the Black Lodge so it’s clear that Coop has retained some memories of his time there. Although he’s directed to call for help, Coop simply mimics the behaviour he sees in the Casino, putting coins in the machines and calling out “Hell-ooooo!” on the presumption that this is how you call for help. A vision of the Red Room leads him on a lucky streak and he amasses thirty jackpots. It’s a gloriously bonkers scene.

In Philadelphia’s FBI Headquarters the investigation continues into the murder of Sam Colby and Tracy Barberato, hollowed out by the creature from the glass box in New York. At the conference are more familiar faces. There’s Lynch reprising his role as Gordon Cole and the late Miguel Ferrer back as cynical forensics expert Albert Rosenfeld. We’re also introduced to Tammy Preston (Chrysta Bell), the FBI investigator who reopened the Dale Cooper files in Mark Frost’s book. They receive a call that Mr. C has been arrested and, as they prepare to fly to Dakota, Albert appropriately summarises “Part 3”, directly lifting Lynch’s quote about his unmade film Ronnie Rocket, as “an absurd mystery of the strange forces of existence”.