Imagine, you’re a skilled researcher working in a top secret lab completing biochemical trials on crops, and you’ve been out on the lash the night before a critical test. You’re still so pissed the next morning that — whoops !— you cause a major bio-hazard that threatens to end the world. Despite the portentous warning from The Doctor that “the end of the world is a billion, billion tiny moments” I was left wondering if Peter Harness and Steven Moffat were warning us more about the consequences of irresponsible drinking in this week’s Doctor Who, “The Pyramid at the End of the World”, than they were about an invasion from alien Monks who want to love us to death.

I mean, really, you’d call in sick. And if you’ve broken your reading glasses you’d tell someone else rather than the hungover colleague who seems more interested in lunch than decimal points. That lab won’t have its government contract renewed any day soon, will it? Let’s face it, it’s not just Erica (Rachel Denning) and Douglas’s (Tony Gardner) failure to follow containment protocol that’s the problem. It’s the whole protocol that’s a bit skew-whiff if you ask me. 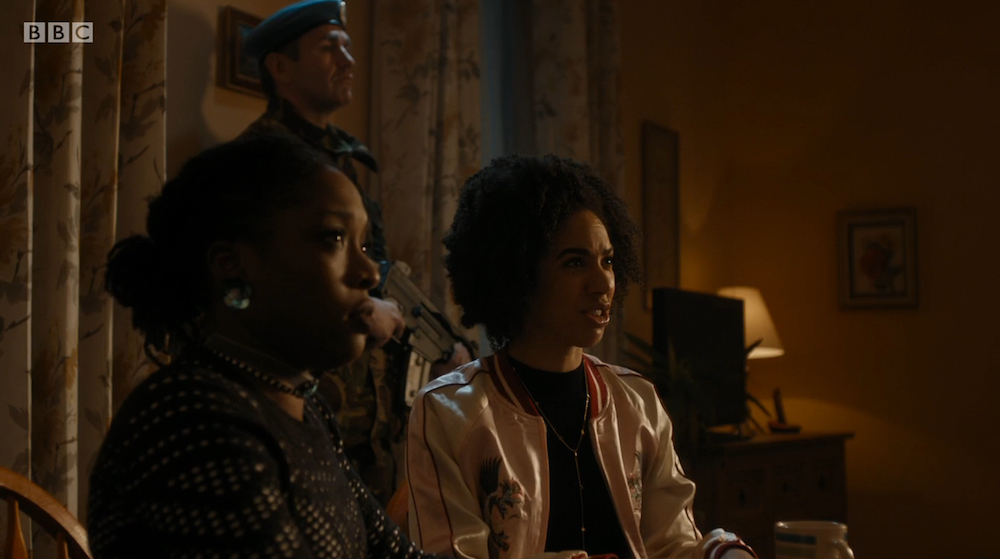 Sadly, it’s a plot device so hamstrung with howling great problems that it rather undermines what should’ve been a thoroughly nail-biting episode. I suppose “The Pyramid at the End of the World” is telling us we’re more likely to make ourselves extinct through an avoidable accident, or a chance mistake rather, than an orange President determined to fling a salvo of nuclear missiles in North Korea’s general direction. Or, in this case, a bomber and a submarine hurling bombs at an ancient pyramid that materialises in the disputed territory of Turmezistan.

A show of military strength from the Russians, the Chinese, and the Americans just won’t cut it against all powerful Monks who’ve run simulations of their invasion until they’re blue in the face and have concluded that some slipshod procedures and two compromised researchers in a secret lab are the weak link they can exploit. The Doomsday Clock, ticking down the threat posed by their manipulation of the situation, was recently in the news when the The Bulletin of the Atomic Scientists moved the clock forward to two-and-a-half minutes to midnight. In 2017, it was a reflection of their fears that in addition to “the existential threats posed by nuclear weapons and climate change, new global realities emerged, as trusted sources of information came under attack, fake news was on the rise, and words were used in cavalier and often reckless ways.” 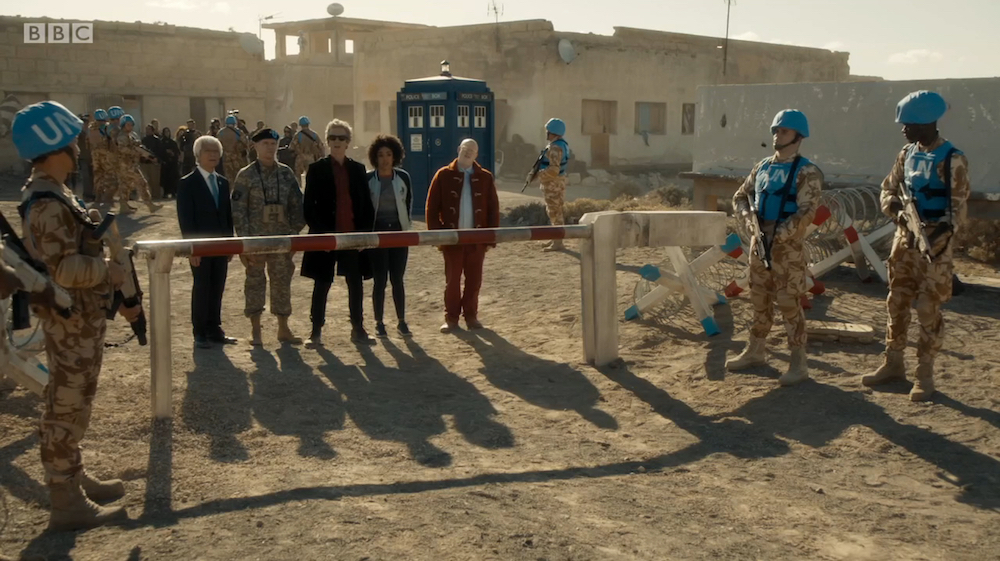 The Doctor (Peter Capaldi), Bill (Pearl Mackie), and Nardole (Matt Lucas) are drafted into service by the Secretary-General of the United Nations. Harness and Moffat recycle last week’s joke about The Pope upsetting Bill’s date with Penny (Ronke Adekoluejo) by re-staging it this week with UN troops and the Secretary-General (Togo Igawa) crashing another of Bill’s attempts to court Penny.

Penny must surely be seeking counselling by now, after this interruption comes hot on the heels of Bill’s story that she’s been part of a computer simulated history of Earth and her tutor is an alien. It’s good that Bill does have someone to confide in, but should we trust what we see? Isn’t it possible that this, too, is all a simulation right from the start? Are we watching fake news? I do wonder about that mixing of ‘previously’ and ‘now’ in the pre-title sequence and whether that’s simply a bit of misdirection. 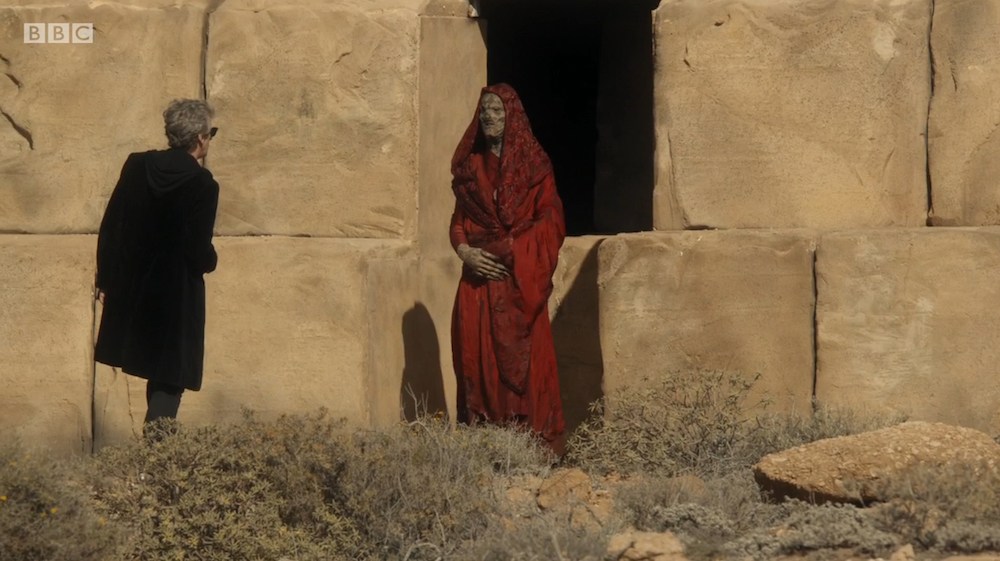 When the Secretary-General turns to The President of the World, a.k.a The Doctor, and flies him to the troubled region and its mysterious pyramid, familiar themes emerge and the episode provides a continuation of the some of the politics explored previously by writer Peter Harness. Turmezistan was the location for the political thriller two-parter “The Zygon Invasion” and “The Zygon Inversion”, where Harness also explored the ‘truth or consequences’ behind conflict, invasion, and immigration, and featured a passionate anti-war polemic from The Doctor. Another of Harness’ scripts, “Kill the Moon” also left the ultimate choice of the Earth’s fate to The Doctor’s companion, Clara, and her fellow survivors Courtney and Lundvik.

Bill follows in their footsteps and the turning point of “The Pyramid at the End of the World” is Bill’s absolute faith in The Doctor to save the planet after she’s persuaded the Monks to restore his sight. After all, his doom-laden meditation at the start of the episode did reflect on “a last sight you will ever see” and predicted that doomsday happens “unnoticed in silence or in darkness.” That the Monks have been manipulating their various simulations of Earth’s history to identify the perfect crisis point to exploit is also reminiscent of how the Silence influenced human progress to create a fixed point in time for the death of The Doctor. 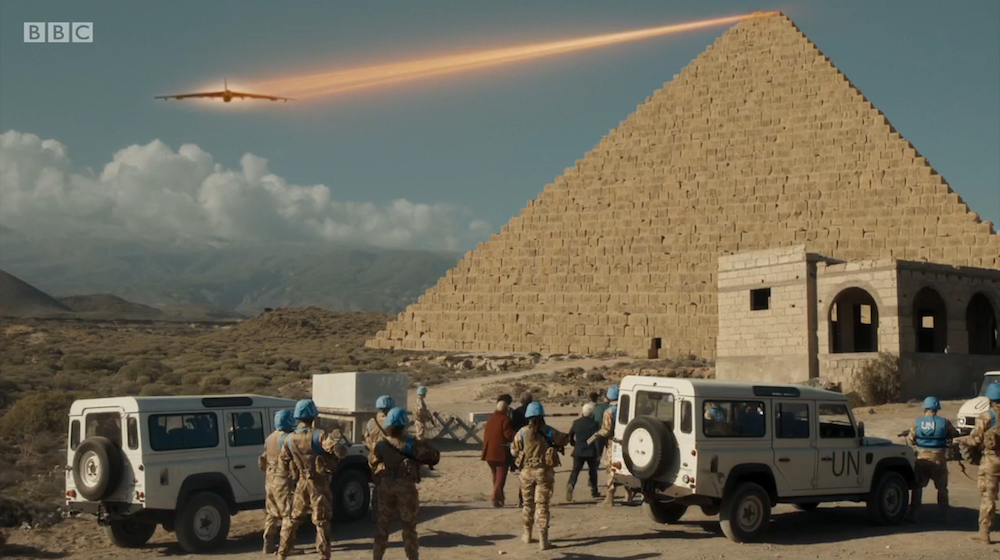 The Monks are obsessed with the nature of power and capitulation to power. The world has to consent to their rule because they’ll save it from catastrophe wrought by human error in an unremarkable biochemicals lab. This idea of consent might take us to John Locke and his “Two Treatises on Government” of 1690. He considered that a government was set up to protect the rights of its people and he was concerned with how people then gave their consent to majority rule and were obliged to obey the law.

We’re supposed to give our consent through the ballot box and vote for our government to make decisions on our behalf. We’re surrounded by concerns that require the consent of governments and the United Nations about disputed territories and going to war, consent to engage UN peacekeeping forces and consent for humanitarian intervention. But the democratic process has lead to some of those billion, billion disastrous moments in history. Just as disastrous as The Doctor’s decision not to tell Bill he was blind and to buy Nardole’s lungs on the cheap.

Perhaps this is the way that the Monks see themselves, as a ruling elite who feel they have the duty and the right to intervene in human history. The host planet’s population must give its consent and accept this intervention to save itself . “We will be invited,” claims one of the Monks. But what does that mean eventually? 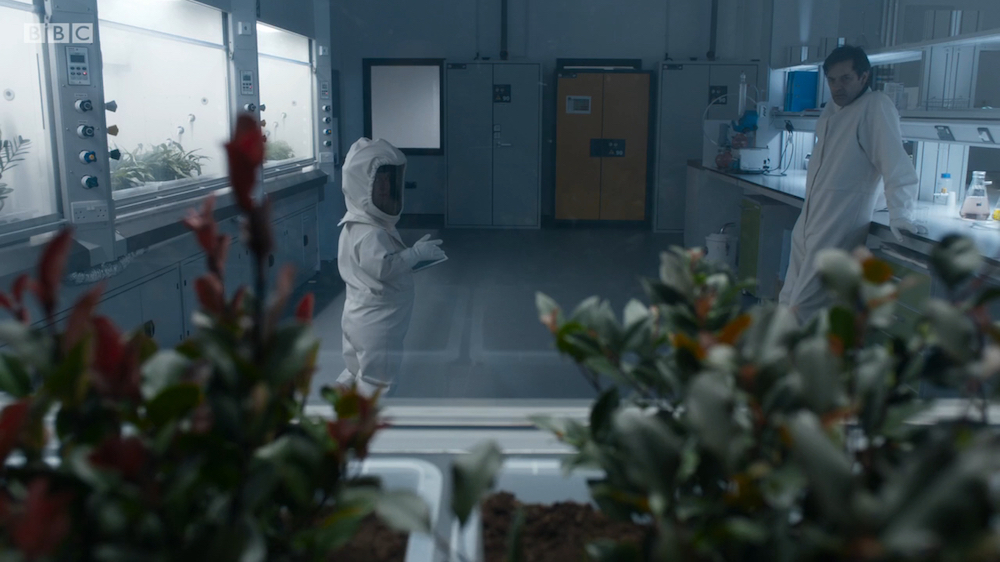 In times of crisis Bill discovers that the world relies on The Doctor as its chief negotiator. The problem is he isn’t seeing the whole picture. He’s still blind and arrogant enough to believe he can handle any and all problems. “Who needs eyesight?” he ponders as he pops his augmented sunglasses on. Practically everyone’s relying on sight in this story; be that Erica with her broken glasses, the drunken Douglas, the Monks with their feeds into security cameras, and Nardole’s Google searches. What’s still slightly unrealistic is that Bill hasn’t cottoned on to The Doctor’s blindness. It’s taken her until their confrontation with the pyramid to realise something’s not quite right.

The Doctor brings together Colonel Brabbit (Eben Young), Xiaolian (Daphne Cheung), the Secretary-General, and Ilya (Andrew Byron) for a bit of a chat and to discuss strategy for what good it will do them. Once the missiles have been fired and the bombers deployed to no effect, The Doctor reasons that their efforts are being misdirected and advises them “don’t look where the arrow is pointing, look where it is pointing away from.” 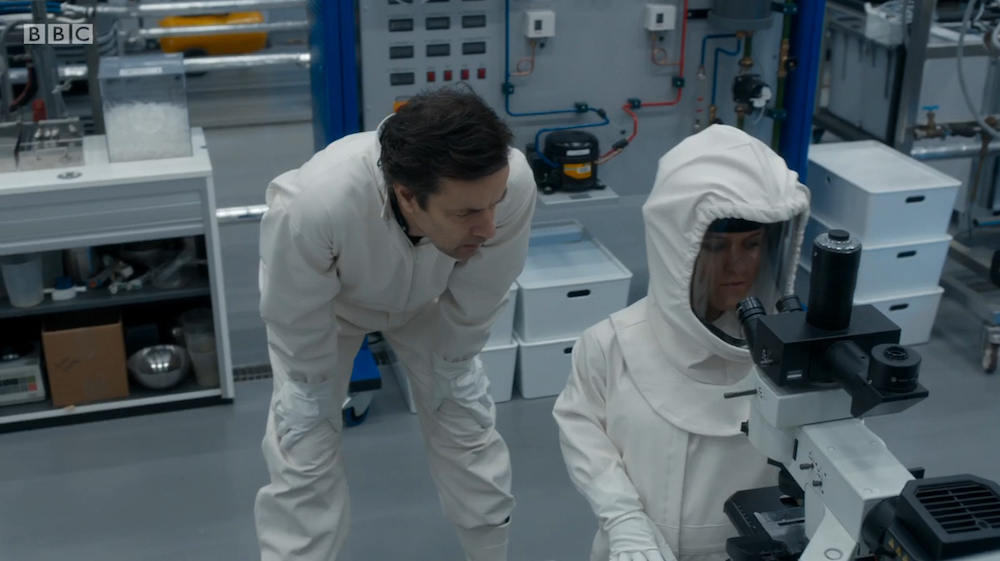 It could be a trap but he believes “every trap you walk into is a chance to learn about your enemies.” However, the crucial point here is that he admits that traps expose your enemy’s weaknesses. And your own. If you consent out of fear and your heart isn’t in it where, as the Monks say “we must be wanted, we must be loved”, or you’re tempted by another strategy then they will extinguish you.

The problem with this is that once these all too human scientists cause a catastrophe in a biochemical lab, the military and The Doctor are stuck in a room chatting. The episode spends a lot of time info-dumping in long scenes of dialogue. The other problem is you have supporting characters that are essentially disposable and you’re not given the time or inclination to care about them. When three military leaders crumble to dust under the hands of the Monks you’re not exactly wracked with grief when they’re found wanting in the pure consensus stakes. 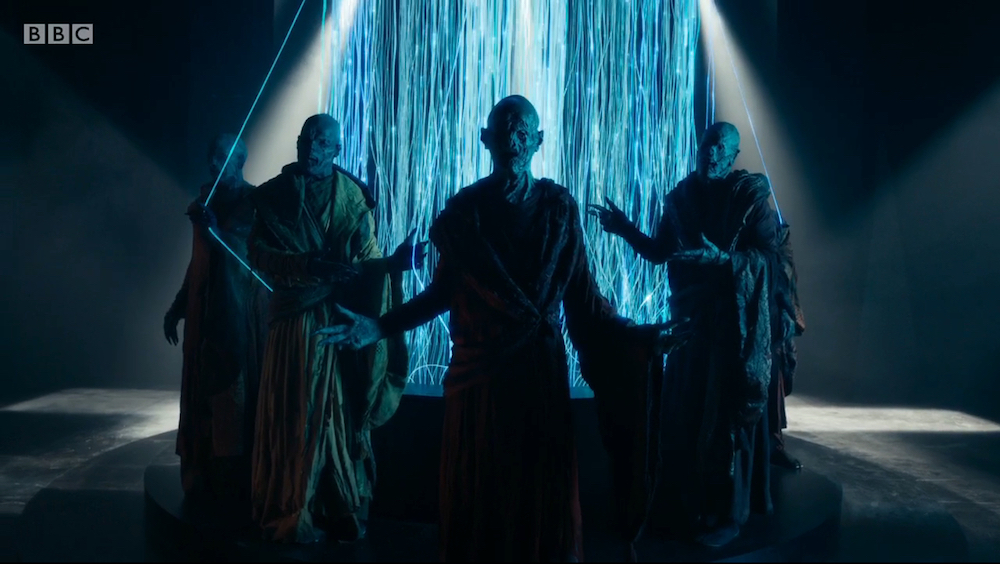 This isn’t simply a case of ineffectual plot turns but also where the quality of performances, the regular cast excluded, isn’t as high as in previous episodes either. Daniel Nettheim’s direction is laudable and the locations look great, the Monks are interesting monsters even if we don’t know their real motivation (a popular theory is they’re the survivors of Mondas given we’ll see the original Cybermen some time soon), and the political themes have their fingers on the pulse. It just feels rather underpowered.

It leads us to that contrived ending in a bio-lab where Erica can’t point a security camera at a combination lock to help The Doctor escape and, during a lockdown, the air filtration system isn’t capable of full decontamination before it vents into the atmosphere. It’s where stupid enemies don’t realise, by turning on only one security feed after they’ve all been shut off by The Doctor, that they’ve given away their entire strategy to him.

It may be implausibly arrived at, but the denouement, where Bill consents to Earth’s servitude to the Monks in order to restore The Doctor’s sight and keep him alive, is the saving grace of the hour. She might consider herself as nobody but she’s the only one left with any power. She has the power to bargain with the Monks and consents to their wishes out of the purest of motives — love. But true to Harness’ themes, we wonder what the consequences are when she demands, “I’ll tell you what old man — you’d better get my planet back!”