The big question, having watched Twin Peaks: The Return “Part 13”, is what the heck is going on with Audrey? We’ll get to that in a minute, but suffice to say this episode is one of the saddest and oddest in the series, as it seems to hinge on relationships that foundered, lives that took the wrong road, and the consequences of unrequited love. It also raises some questions about the reality of events we are watching.

Cherry pie and damn good coffee, although in plentiful supply and symbolising the positive values of Americana, can only momentarily anaesthetise the patients, as greed, violence and personal crisis crowd in on the wounded characters living in and around Twin Peaks.

We begin at Lucky 7 Insurance and with the absurd, surreal conga that the Mitchum brothers and their pink-attired Silver Mustang casino girls Candie, Mandie, and Sandie, dance through the offices. Having netted their insurance pay out, Rodney (Robert Knepper) and Bradley (Jim Belushi) show their appreciation to Bushnell Mullins (Don Murray) with a box of cigars, a set of diamond cufflinks, and the keys to a new convertible. Over at Dougie’s house, Janey-E (Naomi Watts) is astonished to see a new car, topped off with a bright red bow, sitting in her drive, and the presentation of a jungle gym for Sonny Jim (Pierce Gagnon). 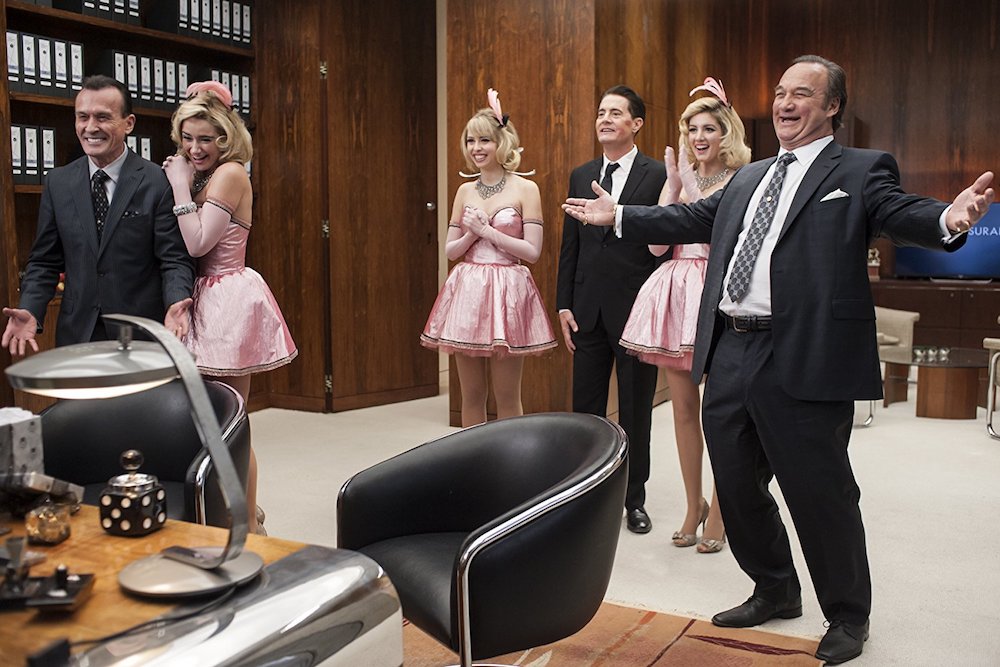 These are material things to make Janey-E fleetingly happy, as one wonders if it’ll ever be revealed to her that the husband she loves unconditionally is an impostor. But for now the innocent Sonny Jim, who’s possibly some embodiment of the White Lodge and its Laura Palmer avatar, gloriously clambers over his gym, complete with flashing lights, roving spotlight, and a music box rendition of Swan Lake’s “Dance of the Swans”–notably  a ballet about doppelgängers yearning for humanity–with sheer abandonment. He’s in seventh heaven because, as Bradley Mitchum tells Mullins, “a wrong has been made right and the sun is shining bright!” The spotlight is an interesting touch. In the original series, spotlights heralded Lodge revelations, such as the reveal of BOB prior to the death of Laura’s cousin Maddy Ferguson and Cooper’s simultaneous vision of The Giant on stage at the Roadhouse.

The fact that Dougie (Kyle MacLachlan) is still alive, after the scheme to incriminate him with the Mitchum brothers failed, leaves Lucky 7’s corrupt insurance man Anthony Sinclair (Tom Sizemore) confessing such to Duncan Todd (Patrick Fischler). Given one more chance to kill Dougie, he acquires some poison from Detective Clark (John Savage), an associate of giggling policemen the Fusco brothers. However, the power of cherry pie and coffee seems to expurgate the poison in his own soul before he can deliver the fatal dose. It’s a very funny scene, especially when, after Dougie’s made some human connection with him by rubbing his dandruff-covered shoulders, Anthony seizes the poisoned coffee and rushes into the men’s room to throw it down a urinal. “That bad?” quips an adjacent patron having a wee. 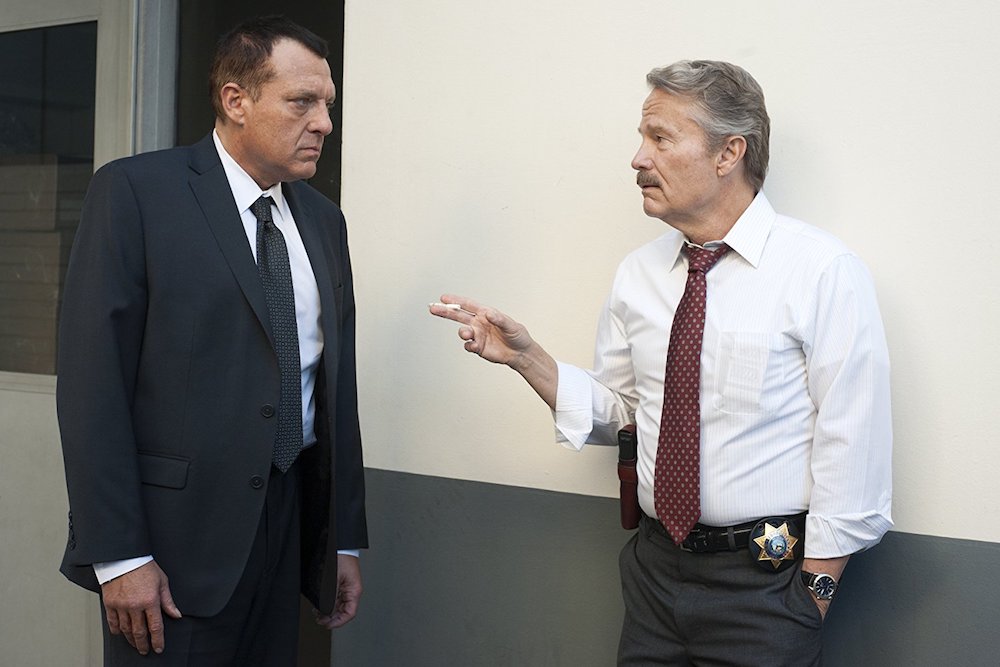 Anthony and the Fuscos are, like the Mitchums, a threat dismissed through Dougie’s coincidental actions as the ‘holy fool’ of the series. Anthony is saved from further corruption and confesses his misdeeds to Bushnell, and the Fuscos take one look at Dougie’s fingerprints from the crime scene where Ike ‘The Spike’ attempted his assassination, and throw the evidence away. After all, how can Dougie’s prints match those of FBI agent Dale Cooper and the notorious, recently-escaped criminal of the same name? That would be silly!

Over in Western Montana, said criminal Mr. C (Kyle MacLachlan) has tracked down the treacherous Ray Monroe (George Griffith) to his gang’s hideout, which turns out to be previously mentioned The Farm. To get to Ray and the coordinates written on Ruth Davenport’s arm, he has to compete in an arm-wrestling challenge with gang boss Renzo (Derek Mears). It’s a wickedly tense scene, as Mr. C plays with the overly confident Renzo, bamboozling him with several moves before snapping his arm off and punching him square in the face. 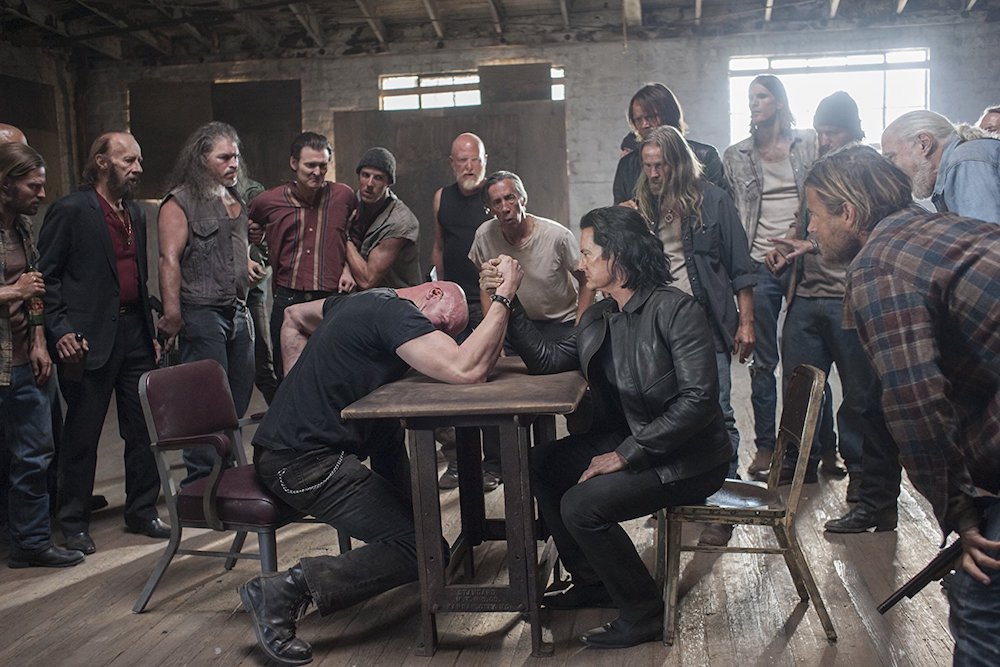 Mr. C’s triumph is crowned by wounding and then killing Ray at gunpoint, but not before we learn a few things: Phillip Jefferies hired Ray to kill Mr. C, but Ray has only ever spoken to him on the phone. “He said you got something inside you that they want,” is the reason given by Ray for the attempt to kill him, confirming they’re after the essence of BOB. Ray was supposed to put a Lodge owl ring on Mr. C’s finger after killing him in the woods. The ring is, as we know, long associated with being a sign of possession by the Lodge, but Ray was somewhat distracted at the time with all those Woodsmen performing their healing ritual. Securing the coordinates, Mr. C demands the whereabouts of Phillip. Ray offers, “Last I heard, he was at a place called The Dutchman’s. But it’s not a real place…” Where could that be? Certainly, Mr. C knows what it is. We see Ray’s body and the ring transfer to the Black Lodge after Mr. C shoots him, just like Dougie’s old body was sent back to the ‘waiting room’ in the Lodge at the beginning of the series.

“Not a real place…” sums up some of the odd places we’ve been on this journey so far, and The Dutchman’s could be linked to another Native American legend, one attached to lost Apache gold in Arizona. The search for the Lost Dutchman’s mine has claimed many lives. Could it be another Lodge portal? Perhaps Lynch is signalling that we shouldn’t take the reality we see for granted in Twin Peaks: The Return. The town itself seems to be caught in a weird existential, self-referential, time-skipping bubble of its own making.

The scene at the Farm is very odd. The gang members watch some of the events between Mr.C and Ray on a massive screen. It’s another example of how characters in the series often look at the world on screens; either by watching television or by watching other characters on surveillance cameras. This seems to be connected to Lynch’s fascination with audiences and the act of watching. The original show was a meditation on soap opera tropes and characters were seen watching a fictional soap, Invitation to Love, that ironically contextualised much of the series’ own narrative.

To underline the point, in “Part 13” we not only see child-killer Richard Horne (Eamon Farren) arrive at The Farm and briefly connect with Mr. C through the huge window-like screen but, later, we also return to Sarah Palmer’s house and observe as she drowns her sorrows in drink in front of a TV. She’s watching an old boxing match, but it seems to be a clip of the match stuck in an endless loop, repeating the same few minutes of the action again and again. Perhaps it’s an old ‘Battlin’ Bud’ Bushnell Mullins match?

It’s another example of the strange shifts in time we’re experiencing. We had that weird end credits shift of Double R patrons back in “Part 7” and in this episode Bobby Briggs (Dana Ashbrook) relates the discovery of Major Briggs’ hidden papers as happening that day (we saw this back in “Part 9”). This doesn’t quite tie in with the two days that Becky (Amanda Seyfried) claims have elapsed since she went hunting for her philandering husband Steven in “Part 11”. Bobby’s discovery seemed to take place some days ago relative to the events in “Part 13”. 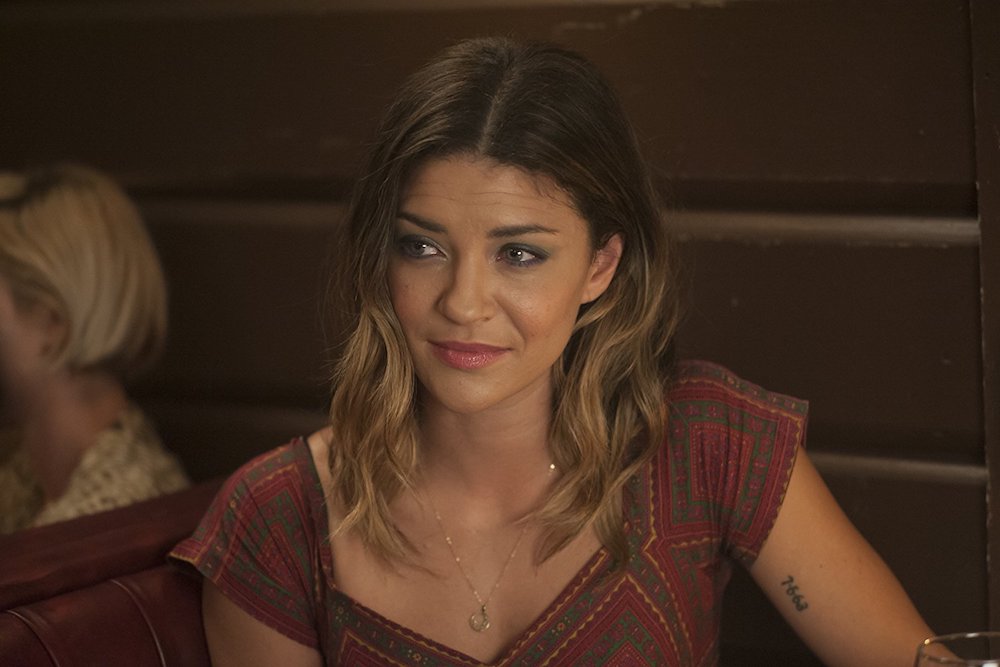 Back at the Double R, we finally get to see Big Ed Hurley again (Everett McGill) and note that Shelly (Mädchen Amick) lures the upset Becky to the diner with a slice of cherry pie, the magical salve for all ills we’ve previously mentioned. The saddest aspect is that the longed for union between Ed and Norma (Peggy Lipton) never seemed to happen. She’s under the spell of a rather persistent financial advisor Walter Lawford (Grant Goodeve), whose chief motive seems to be commercialising Norma’s fantastic recipes and legendary diners to turn a profit, mostly for himself one imagines.

“Norma, you’re a real artist, but love doesn’t always turn a profit,” advises Walter, after dissing her perfectionist approach to the food service industry. He demands she use cheaper ingredients “to ensure consistency and profitability.” Is Lynch having a quiet dig at the lowest common denominator franchising of trustworthy brands? Does this also include Norma’s romantic feelings for Ed, seemingly thrust aside in the name of profit? The economic pitfalls of love, where Norma tangles with the bottom line and Nadine (Wendy Robie) shows off her own business Run Silent, Run Drapes to an admiring Dr. Jacoby (Russ Tamblyn), are offset by Audrey and Big Ed’s problems. 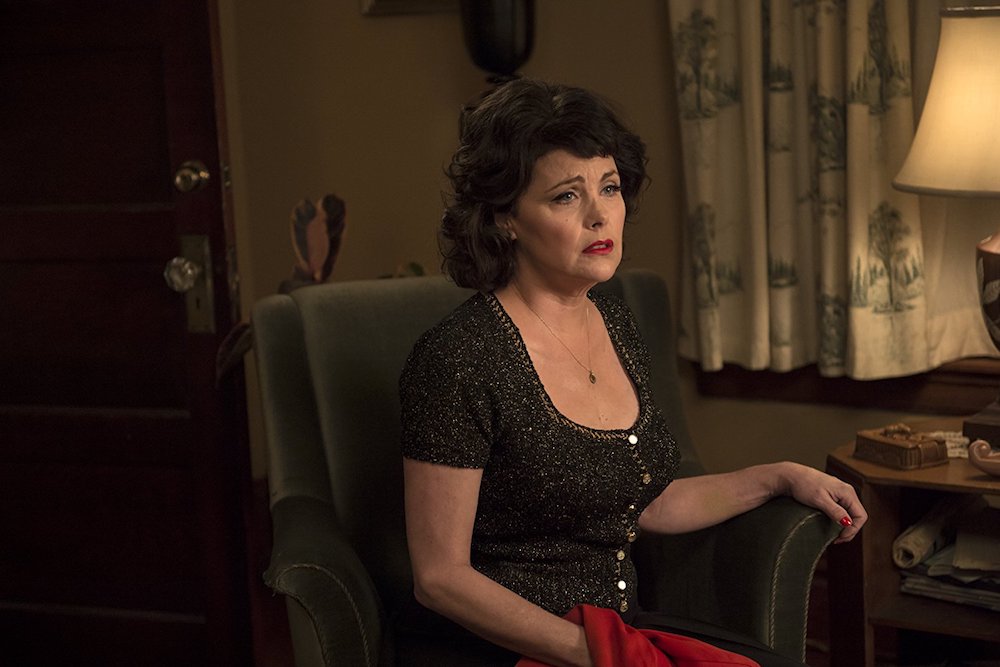 The penny dropped about Audrey (Sherilyn Fenn) when I was rewatching last week’s episode, and this week’s scene between Audrey and her supposed husband Charlie (Clark Middleton) confirmed my own suspicions about what’s happening. What if Audrey was left in a coma after the explosion at the bank in the series finale back in 1991? Or, what if she did recover but is in some deeply traumatised state?

Are we seeing her internal struggle to surface out of her hysteria or watching her therapist attempting to reach her? We know that Mr. C visited her in the hospital not long after he emerged from Glastonbury Grove and departed Twin Peaks. Her comment to Charlie, “I feel like I’m someone else. Have you ever had that feeling, Charlie?” rings a few alarm bells and when she claims, “like I’m somewhere else and I’m somebody else. Have you ever felt that?” then there’s a growing feeling she’s a severely damaged version of Audrey.

She is unable to take action. She intends to go to the Roadhouse to find Billy but then questions her motives and the whereabouts of the Roadhouse. Charlie makes a very strange comment when she demands he tell her what she should do. “Now are you gonna stop playing games or do I have to end your story, too?” Is she in a coma, is she trapped in an eternal therapy session or in an unreal place like a Lodge dimension? She appears to be in a fugue where she is and isn’t aware of her surroundings, does and doesn’t know what her real story is.

To top all of this sadness and angst we have James Hurley (James Marshall) on stage at the Roadhouse, performing the falsetto ballad “Just You and I”. I was never a fan of this from the original series but it has a poignancy to it as, when we last saw him perform it in Twin Peaks, his backing singers were Donna Hayward and Maddy Ferguson. Here, he reduces booth dweller Renee (Jessica Szohr) to tears, the song needling into some vulnerable spot in her soul.

We segue from the Roadhouse to a haunting scene of Big Ed, sitting alone in his gas station watching the dark freeway outside, contemplating lost love and what appears to be a very empty life. He burns a folded note. Perhaps it’s a love letter he’s never been able to deliver? But then, as other fans have pointed out, there’s something odd in that scene. He peers out, briefly concerned at something he might’ve seen, and it’s been noted that his reflection in the window between the gas pumps seems to be moving independently, as if time was jumping out of joint. Twin Peaks is definitely “not a real place..”