After plunging us into the dark origins of Twin Peaks: The Return in “Part 8” (perhaps the most Lynchian expression yet given free reign on television), this week’s episode simply drops us back into the ongoing stories set in the present day. We’re halfway through the season and, while the questions and conundrums continue to pile up, it’s reached a point where the disjointed 18-hour structure might frustrate more than it rewards.

Though it offers some little intrigues to keep us going, “Part 9” is slightly anti-climactic and doesn’t move us that much further forward, and yet it’s full of exposition. Characters tend to keep restating the major narrative connections but they reveal a lot of information. 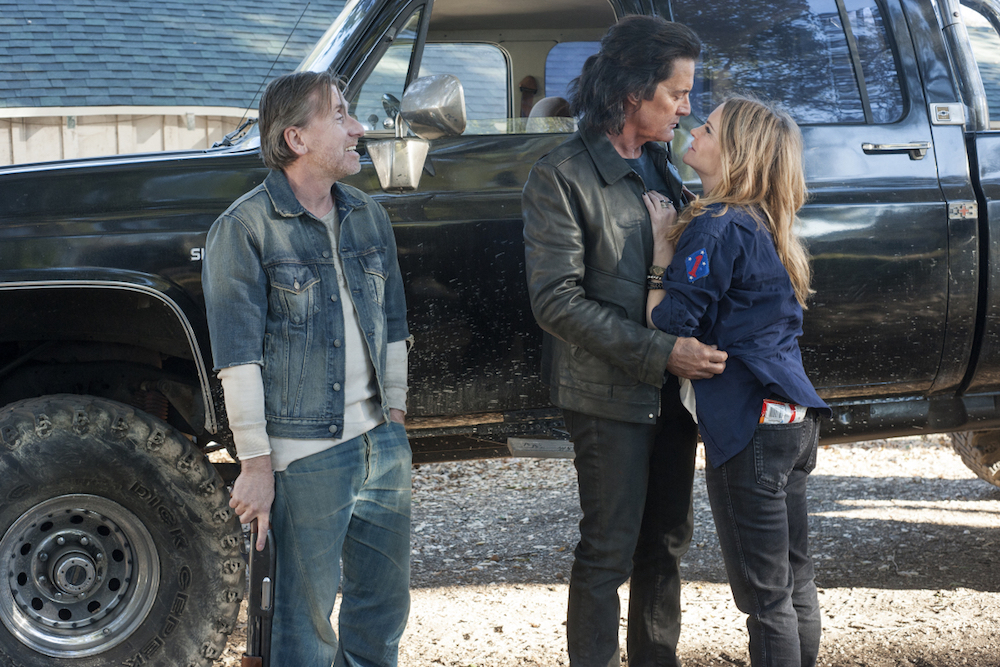 Picking up from his mysterious and miraculous survival at gunpoint, thanks to the healing powers of the ghostly Woodsmen, Mr. C (Kyle MacLachlan) heads for a safe house and meets with the other members of his expansive network, Chantal and Hutch (brief cameos from Jennifer Jason Leigh and Tim Roth). They provide him with medical assistance, a vehicle, and a new phone. From this “clean” pink phone, Mr. C sends a cryptic message: “around the dinner table the conversation is lively.” It’s not the first coded message he’s sent. Back in “Part 5” he told someone during his prison phone call, “and the cow jumped over the moon.”

He checks in with Duncan Todd (Patrick Fischler), who was given the task of ordering Ike ‘The Spike’ Stadtler (Christophe Zajac-Denek) to assassinate Lorraine and Dougie back in “Part 6”, and insists he completes the job. Leaving Hutch with instructions to eliminate Warden Murphy, we discover, rather shockingly, that he’s sent the text from the pink phone to Diane (Laura Dern) who eventually picks it up at the Buckhorn morgue. 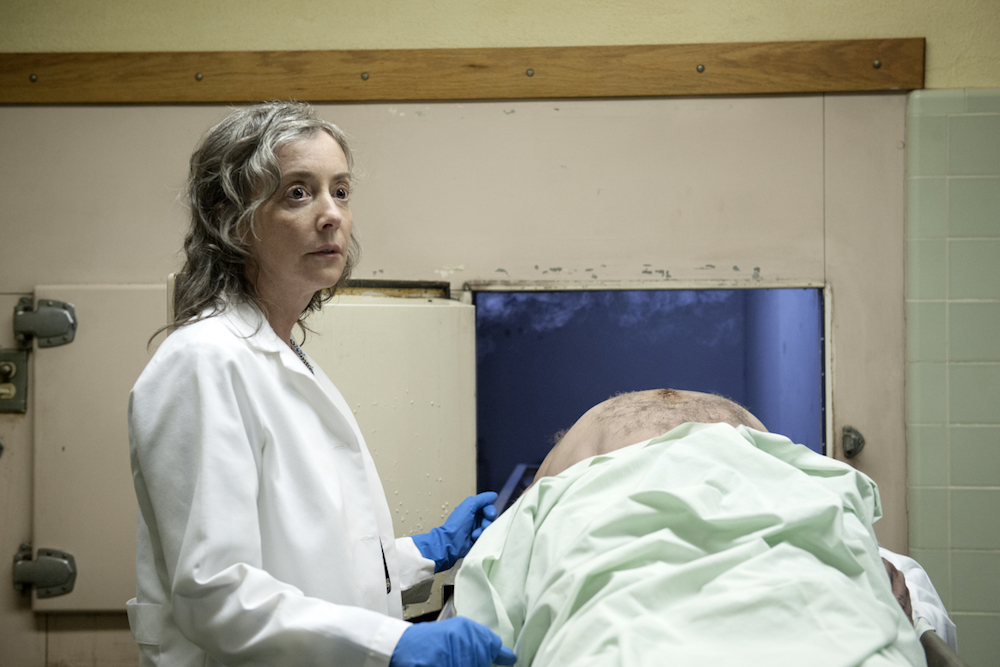 It’s horrifying to think that he’s been contacting her ahead of her reunion with Gordon Cole (David Lynch) and Albert Rosenfield (Miguel Ferrer). If we go back to “Part 2” you might recall that in Las Vegas Duncan handed cash over to his associate Roger, instructing him to tell “her” that she had the job. Is Diane under the control of Mr. C’s network and working for him within the FBI investigation?

Gordon, Albert, Diane, and Agent Tammy Preston (Chrysta Bell), en route to Philadelphia, are diverted to Buckhorn, Dakota, after Gordon receives a phone call from Colonel Davis (Ernie Hudson) at the Pentagon about the odd discoveries regarding the headless body of Major Garland Briggs. Diane’s interest is piqued when she eavesdrops on the Pentagon’s involvement and, looking worried, attempts to access messages on her phone only to find them blocked. Gordon also finds out from Warden Murphy that “Cooper flew the coop”. 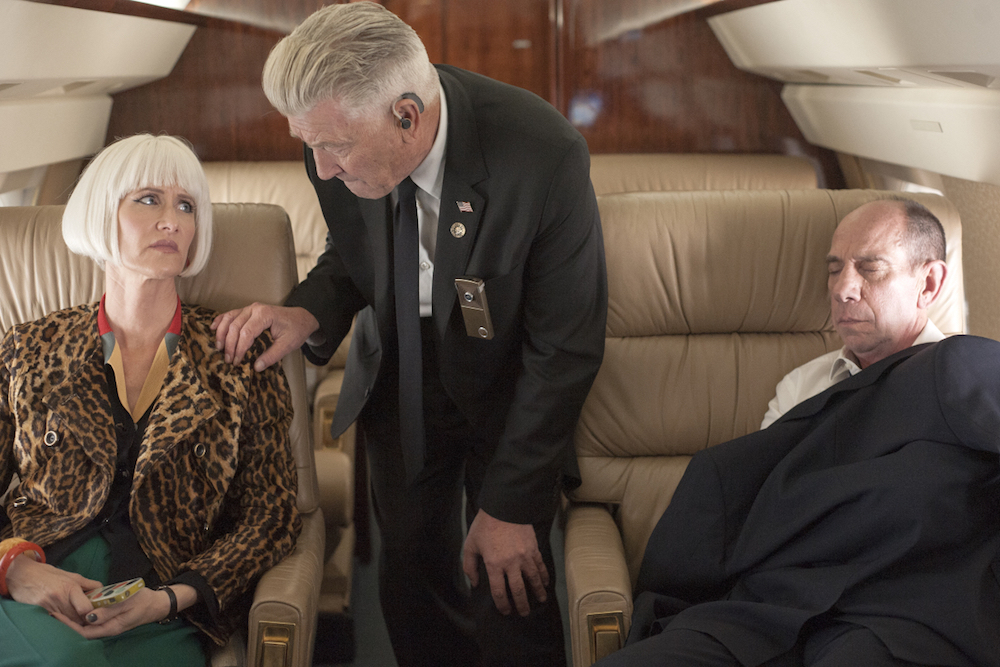 The backstory of Major Briggs is front and centre in this episode. Briggs was supposed to have died in a fire shortly after encountering the doppelgänger Cooper but, as we know, his body has been found at the scene of Ruth Davenport’s murder. We’ll get back to the Briggs legacy in just a minute.

Back at the Las Vegas Police Department, Dougie (Kyle MacLachlan) and Janey-E (Naomi Watts) are waiting to hear from the police after Ike’s frustrated assassination attempt. Three officers interview Dougie’s boss, Bushnell (Don Murray). Bushnell is pretty much ‘Mr. Exposition’ this week, and fills us in on what’s happened to Dougie thus far. We also find out from police background checks that Dougie didn’t seem to exist prior to 1997 and this supports a theory that Dougie was created by Mr. C as a decoy to trap the real Cooper as and when he escaped from the Lodge. 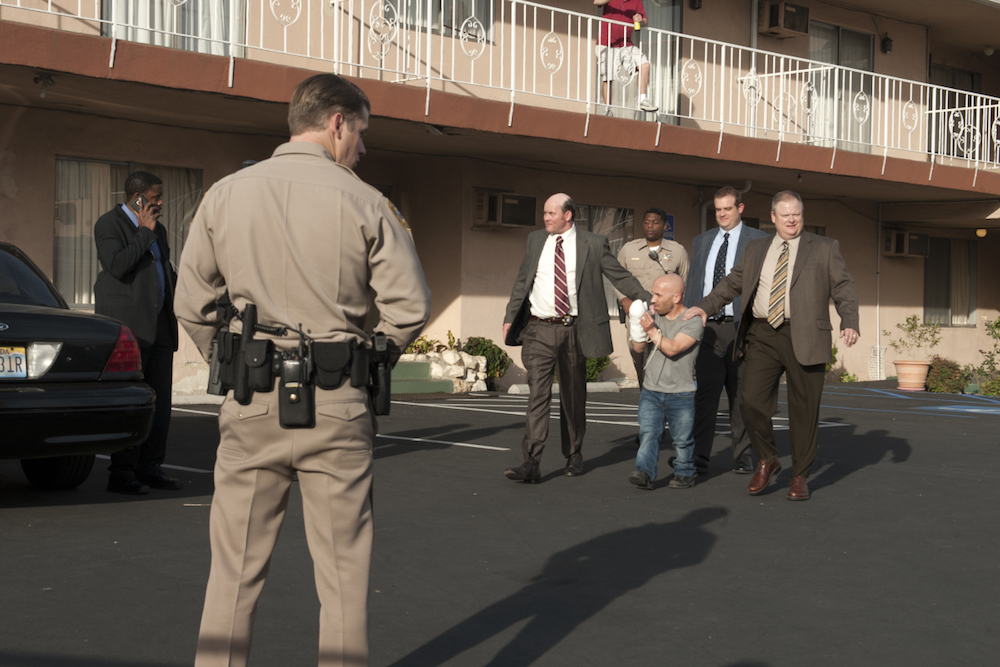 There’s a disturbing, creepy Lynchian twist in these three giggling, joke-sharing police officers conducting the interview. It’s exaggerated in that long lingering pause when Lynch pans across their faces, after Bushnell concludes his info dump, and they silently turn in unison to watch him leave the room. Their arrest of Ike is equally perplexing and hilarious. It also highlights certain visual set ups in this episode that concentrate on groups of three. Scenes tend to be constructed around three characters relating important chunks of story as if Lynch is emphasising that “Part 9” is an expositionary crossroads for the series.

There is also the reminder that within Dougie the real Coop is slowly, and I mean very slowly, asserting himself. In the waiting area, he stares at the stars and stripes, hears “America the Beautiful”, then focuses on a female administrator wearing red shoes, and finally rests his gaze on an electrical wall socket. The shoes, I assume, are a visual trigger to remind Coop of the similarly attired Audrey Horne (where the heck is she?) and the socket another reminder of how he escaped from the Black Lodge and the overarching idea of electricity as a transmitter and marker of intra-terrestrial forces in the series. “America the Beautiful” and the flag represent, I think, that the real Coop recalls a vestige of his honour and patriotism before it became sullied by the Black Lodge’s avatars let loose on the world since that nuclear test in “Part 8”.

Back in the town of Twin Peaks itself, we’re thrown little bits of quirky and unsettling business. Andy (Harry Goaz) and Lucy (Kimmy Robertson) argue over beige and red chairs and the belligerent and lazy Deputy Chad (John Pirrucello) and his smelly food stink up the conference room to the chagrin of Sheriff Truman (Robert Forster). The Horne clan are revisited and a stoned Jerry Horne (David Patrick Kelly) thinks his foot is talking to him. 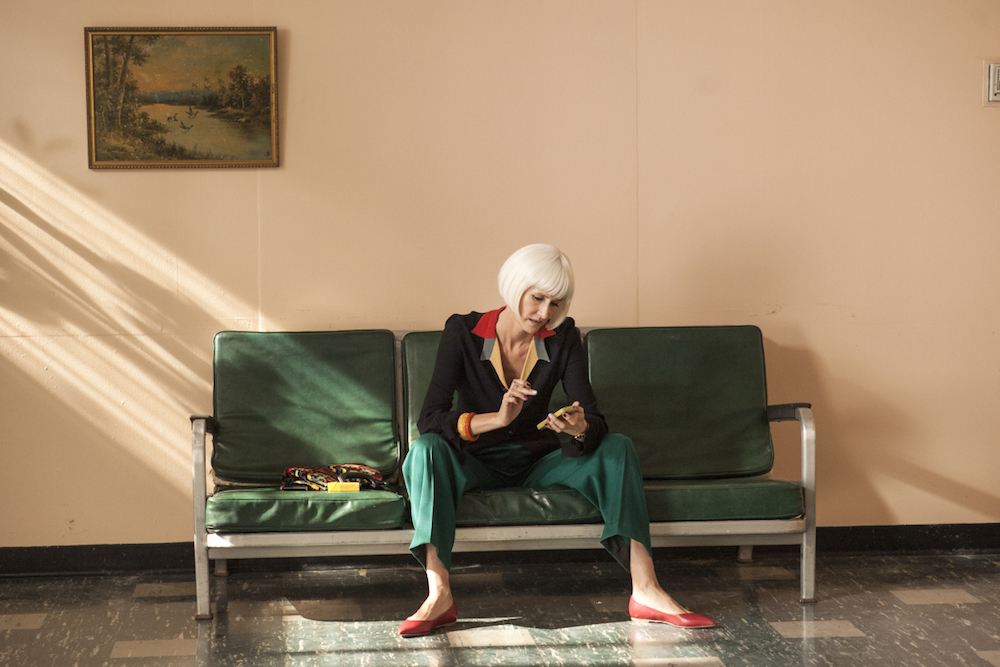 Johnny Horne (Eric Rondell), Ben’s son with a mental health condition who was originally tutored by Laura Palmer, escapes from his carer and collides head first into a wall. This dislodges a framed photograph of the Snoqualmie Falls. The twin waterfalls, featured so prominently in the titles with Laura’s face floating above them, combine as one in the image and their topography is perhaps symbolically connected to the location of the Black and White Lodges in Twin Peaks. Finally, Ben Horne (Richard Beymer) rejects the advances of his assistant Beverly Paige (Ashley Judd) as they continue to investigate that mysterious electrical hum.

The major (forgive the pun) development in Twin Peaks is Truman, Hawk (Michael Horse), and Bobby Briggs (Dana Ashbrook) visiting the Major’s widow Betty Briggs (Charlotte Stewart). Garland Briggs is, it seems, a significant connective tissue between the original series and Twin Peaks: The Return. His role within Project Blue Book and knowledge of the Lodges influences the past, the present and the future.

He predicted Bobby would come good and he prepared for the eventuality that Cooper would return from the Lodge as changed men. One day, “they would come and ask me about Special Agent Cooper,” she recalls to the three anticipated visitors. Hidden away in the Major’s chair is a metal cylinder that, in the end, only Bobby knows how to open. It’s a great scene that synthesises the Major’s optimism for his son with the tragedy of his death after meeting the evil Cooper and Dana Ashbrook performs it beautifully. 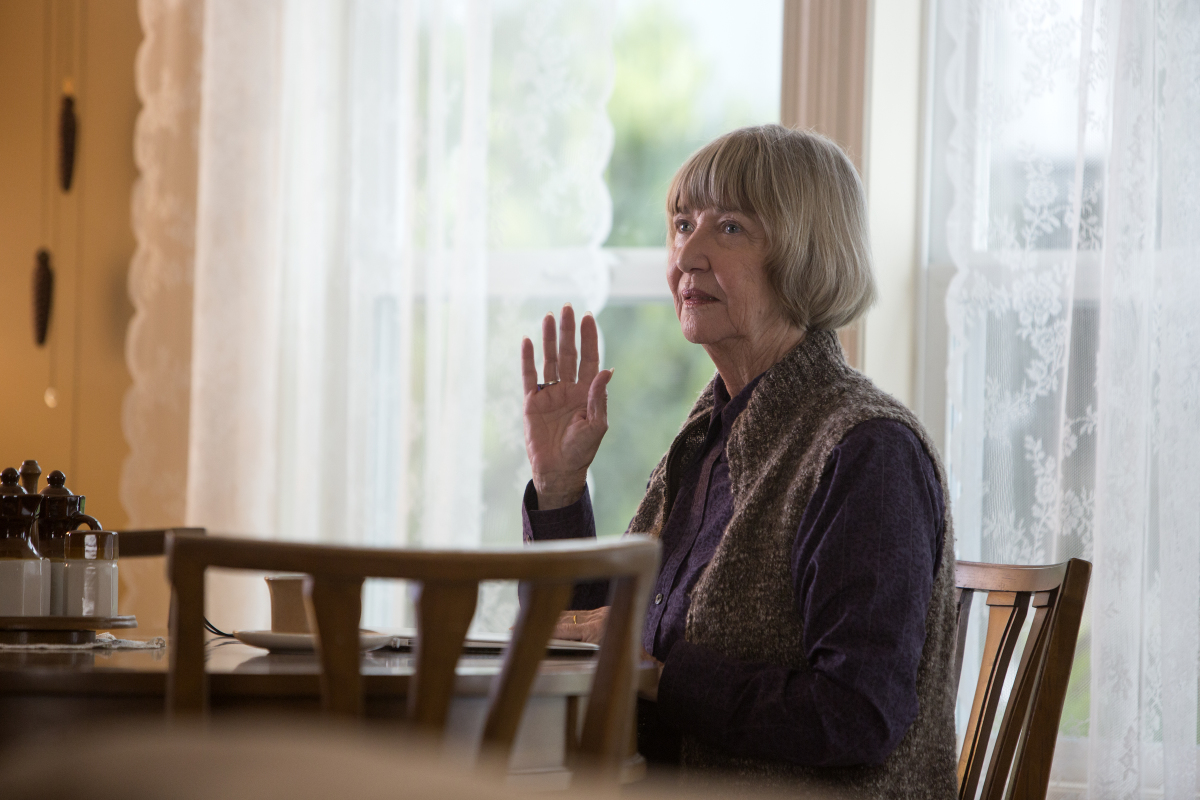 The maps and messages in the cylinder and the Major’s hope for his son take us right back to the original series. Briggs gave Cooper a readout from the Project’s radar, with Cooper’s name included in it, during season two. The message in the cylinder now has Cooper’s name printed twice (or three times if you study the paper on pause). Bobby’s future was also mentioned by Briggs in the same season–having had a vision with “a tremendous feeling of optimism and confidence in you and your future” –so it’s gratifying that Lynch and Frost have gone back and picked those details up.

The Major’s demise in the fire now seems doubtful and the papers he left behind offer some sort of map that give directions to a place 253 yards from Jack Rabbit’s Palace, a location named and shared only by Bobby and his dad. From there they must acquire some soil for an unknown ritual in two days time. A bewildered Truman aptly sums it up: “he saw all this. Whatever this is.”

We also wend our way back to William Hastings (Matthew Lillard), incarcerated for the murder of Ruth Davenport. He’s been running a “strange little blog” called ‘The Search for the Zone’. It actually exists, too, as a bit of Showtime’s viral marketing and a nod to conspiracy theorists everywhere at TheSearchfortheZone.com.

This blog relates to his and Ruth’s successful entrance into an alternate dimension and an encounter with Major Briggs. The site hosts a set of coordinates 44°30’44.8″N 103°49’14.6″W44.512439, -103.820707 and, I presume, for the possession of these coordinates Hastings, his wife, his lawyer, and his secretary were all implicated in the murder of Davenport. They became collateral damage as Mr. C attempted to wrest this knowledge from Hastings and Ruth. Ray Monroe mentioned he knew the coordinates from memory in “Part 8” and this implies most of the leading characters are on a collision course to this mysterious location. 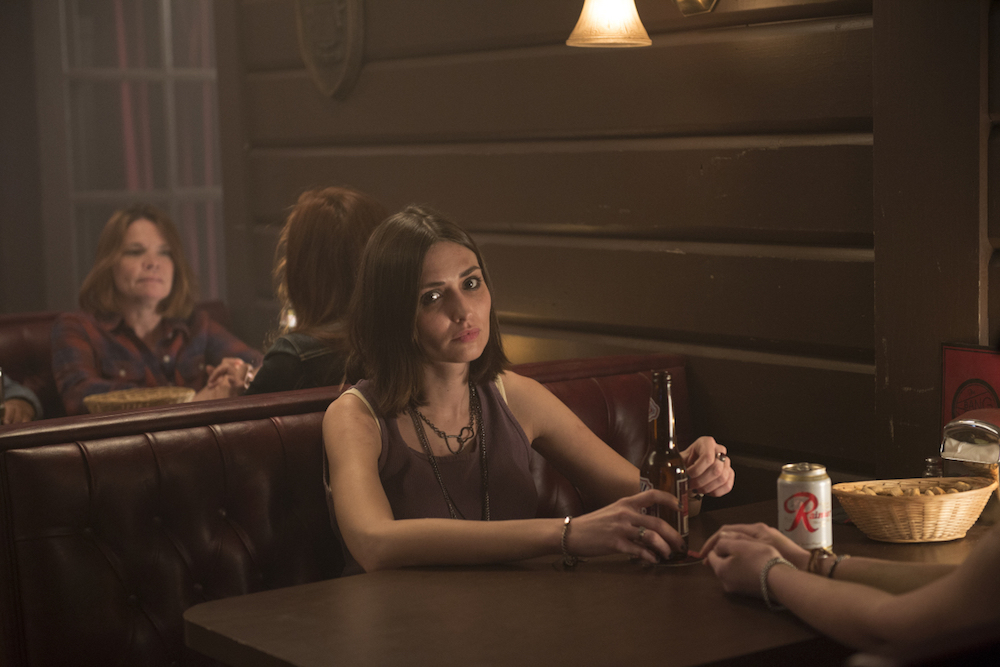 Again, it’s detective Macklay (Brent Briscoe) who brings us up to speed on this exposition and Lynch uses Albert to make a rather meta comment on the nature of this episode with his cheeky remark, “what happens in season two?” Gordon and Albert are also presented with Dougie’s ring, fished out from the Major’s body, and thus two parallel narratives are brought together with the possibility that the ring will lead them to the real Coop.

Their interview with a sobbing Hastings also clues us in to his encounter with Briggs in the other dimension. He describes the Major hiding or hibernating there and requesting “numbers” from a secure military data base in order to go to “another place”. Ruth wrote the coordinates on her hand but her body has yet to be recovered. He describes the Major being attacked, floating up, losing his head and intoning “Cooper, Cooper.” We eventually saw his floating head in the dimensions as Cooper escaped from the Black Lodge in “Part 3”. Lillard goes for broke as the distressed Hastings, finding that sweet spot between comedy and tragedy in his final admission that he and Ruth “were going to go to the Bahamas. We were going to scuba dive” that’s always been a hallmark of Twin Peaks and its use of melodrama.

“Part 9” concludes back at The Bang Bang Bar with a scene that seems to underline the decay infesting Twin Peaks as a result of all the drug pushing and prostitution that seems rife there, a combination of the efforts made by the Renaud clan and the Frank Booth figure of Red. Ella (Sky Ferreira) and Chloe (Karolina Wydra), two new characters, seem to be discussing the drugs available, coded as “penguins” and “zebras”, and the after effects have a wasted-looking Ella unpleasantly scratching away at a sore armpit throughout the scene. Perhaps it’s all very symbolic about the nature of what’s hidden beneath the surface of Twin Peaks.