The shifting tones of Twin Peaks: The Return offer unexpected delight and increasing frustration, so the teasing, arduous longueurs of “Part 12” are bound to test the patience of many a Twin Peaks saint. This is a shame after “Part 11” pushed the series much further forward. While Diane (Laura Dern) might conclude her conference with Gordon Cole (David Lynch), Albert Rosenfield (Miguel Ferrer), and Tammy Preston (Chrysta Bell) with a defiant call to arms of “Let’s rock!”, this episode’s momentum withers away as soon as she utters the words.

Said conference is interesting, in that it overlaps with the history of the Project Blue Book closure and Major Briggs’ involvement in the Air Force’s UFO investigations. Albert relates how it became linked to the Blue Rose investigations within the FBI, and he and Gordon now ask Tammy (whose achievements they’ve been watching since high school) to join them on the “alternate path we’ve been travelling ever since.” This is a journey initiated by oft-mentioned agent Phillip Jeffries and his recruitment of Albert, Dale Cooper, and Chester Desmond (played by Chris Isaak in 1992’s Twin Peaks: Fire Walk With Me) and one that clearly is far from over. 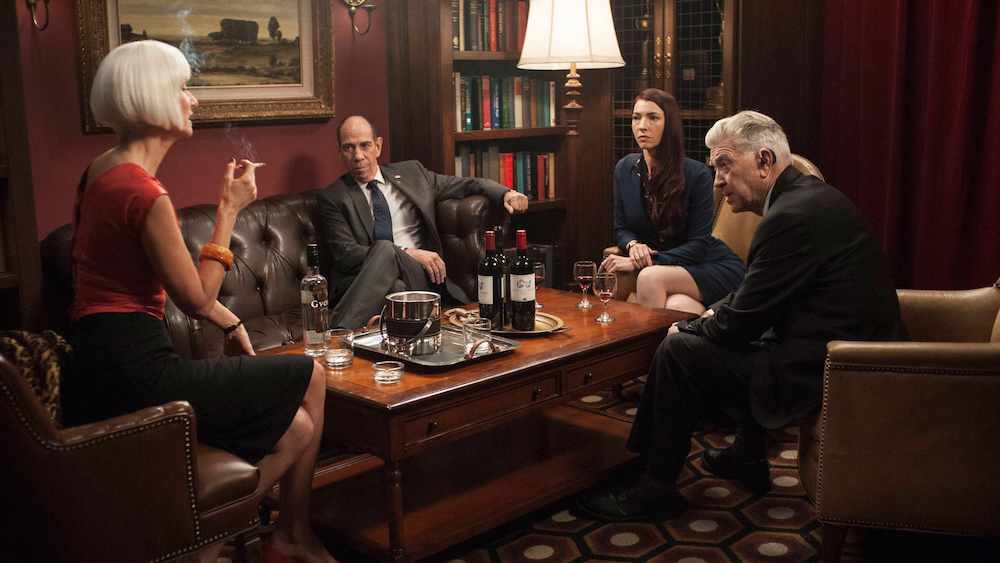 However, it’s Diane that sharp-eyed viewers need to watch. Gordon and Albert feel they can keep a close watch over her communications with Mr. C by co-opting her as a deputy investigator on a temporary basis. Lynch emphasises her connection with the Black Lodge and her separation from the group, at that moment, by having Diane step through a set of drapes to join them. It’s an echo of how so many have stepped through the vivid red drapes of the Lodge after seeking the alternate path. And her cry of “let’s rock!” has similar connotations, having been uttered by the Man from Another Place in the original series.

After a brief return visit with Jerry Horne (David Patrick Kelly), who finds his way out of the woods with a concluding pratfall that seems to sum up the raison d’être for his return to the series, the focus switches to the wonderful Grace Zabriskie, returning as Sarah Palmer. Last glimpsed watching some gory animal films in “Part 2”, here we get the full Sarah Palmer meltdown. Some casual shopping becomes a disturbing cry for help, and a schizophrenic episode for Sarah, as the new turkey jerky she spots behind the counter seems to trigger some neurons deep in her memory. 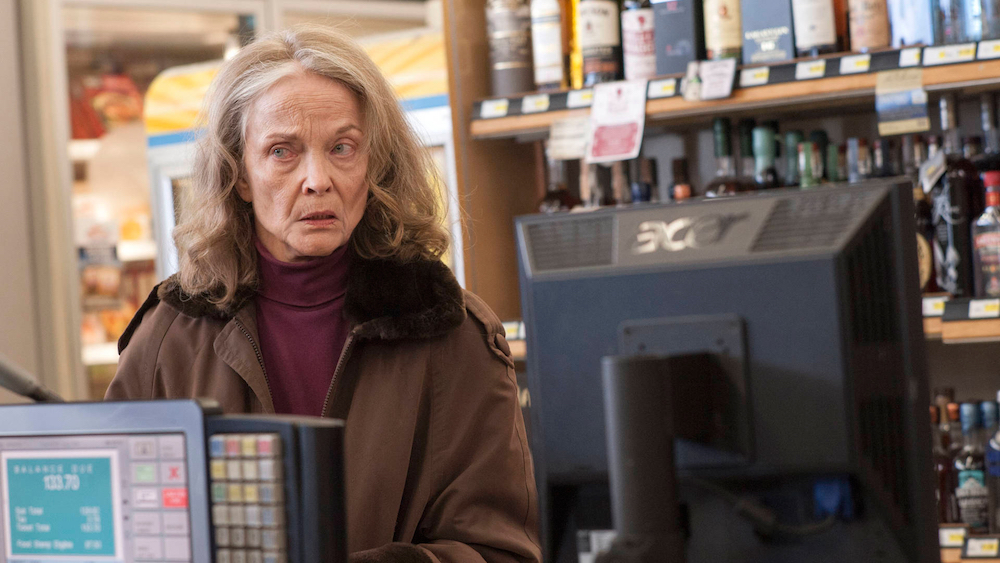 It’s a painful reminder of what this mother and wife has been through, with the deaths of her daughter and husband, and their spiritual connection to BOB and the Lodge. Zabriskie gives a fittingly baroque performance; her face a mass of despairing angles and gimlet-eyed confusion. The encounter with the two young checkout assistants again underlines a major theme of the series. It’s about ageing and memory, and how the younger characters in Twin Peaks are being observed and commented on by their predecessors, those who went through the fire 25 years ago. The little scene between Carl (Harry Dean Stanton) and the elderly trailer park resident Kriscol (Bill O’Dell), who has to sell his blood to make ends meet, is further evidence of the trials and tribulations of ageing in Twin Peaks.

There’s a tangible fear in Sarah that history will repeat itself, and she expresses this in her warning to the youngsters: “things can happen! Something happened to me.” One almost feels like she’s warning the young girl because she can see something of Laura’s innocence in her. Her cry of “men are coming!” brings back haunting, painful images from the original series, and perhaps acknowledges the return of the Woodsmen.

It reminds us, as the Albatross brand of turkey jerky confirms, that Sarah’s been carrying this particular emotional millstone for a long time. Lynch returns to it when Hawk (Michael Horse) goes to check on Sarah at home, and one of the first things we see is a close-up of that iconic ceiling fan whirling round on the landing, always representative of BOB’s presence in the Palmer’s home. It’s coupled with an equally evocative piece of Badalamenti score from the original show.

Again, Lynch intercuts brief moments in-between the longer scenes, showing Richard Horne’s victim Miriam Sullivan (Sarah Jean Long) in hospital, and Diane receiving another cryptic message on her phone, before we get to the strangely repetitive scene showing Sheriff Frank Truman’s (Robert Forster) visit to Ben Horne (Richard Beymer). This scene serves as nothing less than a recap of the horrors inflicted by his grandson Richard Horne, on the young boy he ran down and on Miriam. 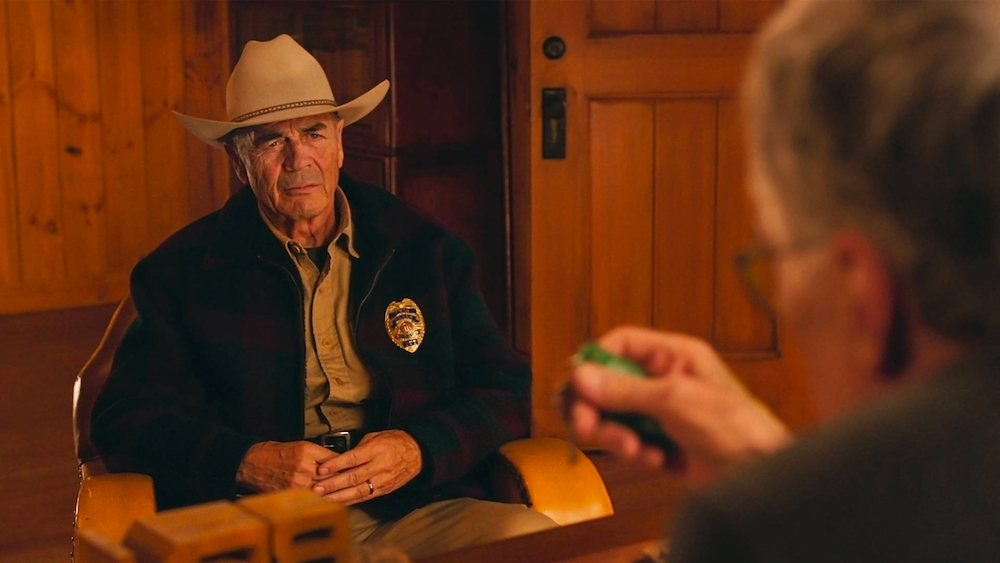 Truman persuades Ben to take care of Miriam’s medical bills, we’re reminded that Richard’s still on the run, and Ben hands over Cooper’s old hotel room key as a memento for Harry Truman. “Strange this key shows up after all these years,” remarks Frank Truman after telling Ben they’ve reopened an old Cooper case. While pondering on Richard’s lack of guidance from a male parent, the generational divide sees Ben wistfully recalling a favourite two-tone green bicycle given to him by his own father.

Back in Gordon Cole’s hotel room there’s a very odd scene. Gordon is entertaining a French woman (Bérénice Marlohe) with a story of his FBI derring-do, and is interrupted by Albert. Now, you’ll either find her departure from the hotel room funny or very irritating. It’s a prolonged, deliberate act of departure, involving shoes, lipstick, adjustment of a red dress, a last sip of wine, exaggerated gestures, and much whispering in French. 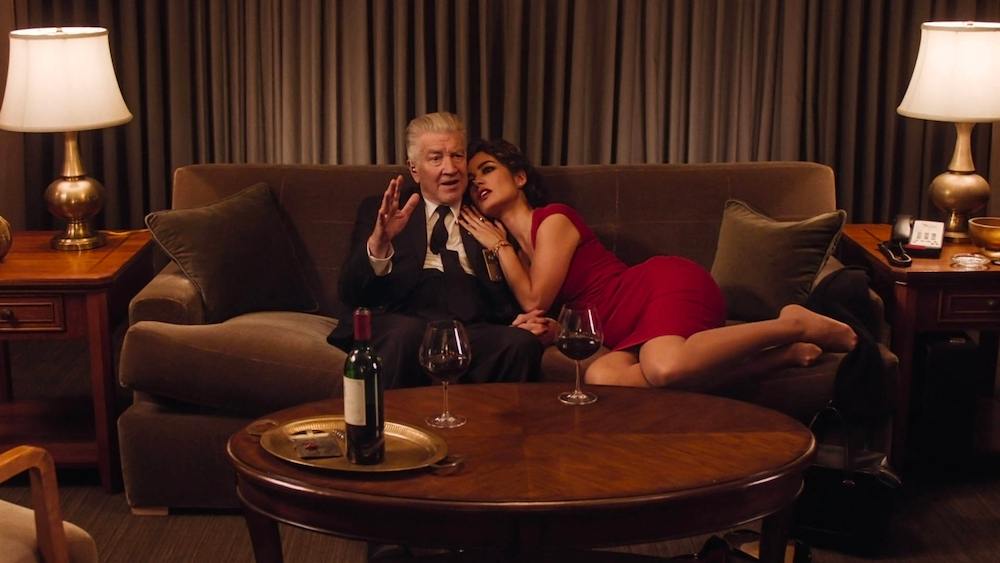 Albert studies it all intently and is then told by Gordon that “she’s here visiting a friend of her mother, whose daughter has gone missing.” He concludes with a pun about turnips, there are long sections of silence between them, and Gordon squeezes Albert’s shoulder repeatedly. Surely, this is all coded messages exchanged because they fear they’re being listened to? Some fan commentators have noted that the French woman’s behaviour reflects the appearance of Lil, the dancer in the red dress, who provided similarly bizarre coded messages to Chester Desmond in Twin Peaks: Fire Walk With Me.

Meanwhile, we see Warden Murphy’s demise at gunpoint, as per Mr. C’s order given to Hutch (Tim Roth) and Chantal (Jennifer Jason Leigh). A disturbing scene, he’s left for dead in front of his traumatised young son (Luke Judy). We receive another broadcast from Dr. Jacoby (Russ Tamblyn), a.k.a Dr. Amp, “doing the vamp for liberty”, railing against treasonous corporate puppets and selling his shiny gold shovels to his number one fan Nadine (Wendy Robie). And suddenly, without fanfare, Audrey Horne is on screen. 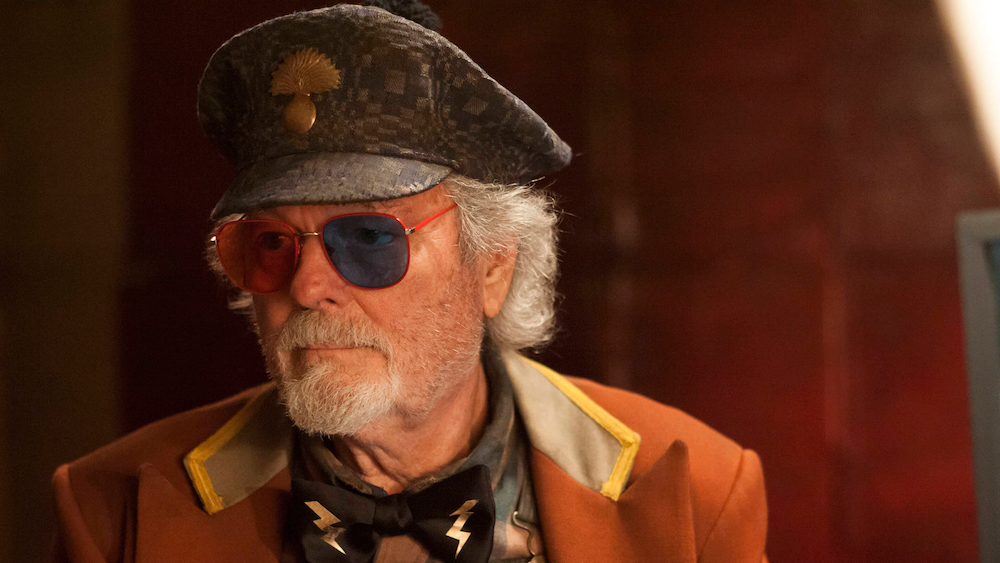 Yes, Sherilyn Fenn has returned after a very long and patient wait. Audrey’s arrival is counter to all expectations, and the scene she appears in is confusing, drawn out, and not quite as satisfying we would want it to be. It heralds the introduction of new characters and what feels like a separate plot, but there are clues in there. She appears to be arguing with a man called Charlie (Clark Middleton), who is her husband by mutually arranged contract, and she’s desperate to get to the Roadhouse and find Billy. Billy’s been absent for two days and a rather angry and bitter Audrey is unhappy about Charles’ lack of concern about him. She is in love with Billy and has had a vision, seeing him badly injured in her dreams. And who are Tina and Chuck? Apparently, Tina’s the last person to see Billy according to the “certifiable” Chuck. And who is Paul? Someone who should come and visit Charlie to ensure he signs Audrey’s papers.

Billy was mentioned in “Part 7” when someone called Bing burst into the Double R and asked if anyone had seen him. Apparently, Chuck stole a truck from Billy. We know Richard Horne stole a truck from a farmer, and we saw that farmer in the same episode, interrogated by Deputy Andy. Was that Billy? Is Richard also known as Chuck? Has Richard (a.k.a Chuck) killed Billy? We’ll have to wait for the answers, and in the meantime Charlie’s call to Tina about the missing Billy only yields a frustrating “how did you find… really… oh, my goodness” response from Charlie to some rather dire news. Audrey rants at him, “you’re not gonna tell me what she said?” before the scene cuts back to Diane at the Buckhorn hotel and we’re all left shouting at the screen, demanding some answers.Since antibioticspro.com only affect the area of the body where they have been injected, the likelihood of undesirable effects affecting the entire body, such as nausea and diarrhoea, is reduced.

Diane enters the coordinates she memorised from Ruth Davenport’s arm to, surprise-surprise, find the not-so-mysterious Lodge location that all parties are keen to discover: Twin Peaks. And back in the titular town, the convention of introducing new sets of characters in the booths of the Bang Bang Bar continues as we eavesdrop on Abbie (Elizabeth Anweis) and Natalie (Ana de la Reguera) gossiping about the amorous entanglements between Clark, Angela, and Mary. They’re interrupted by Trick (Scott Coffey), who’s narrowly avoided a fatal traffic collision on his way over. The credits roll over another episode as Abbie and Natalie celebrate Trick’s freedom from house arrest.

And Dougie (Kyle MacLachlan) got hit by a baseball.