“There Are Rules” opens with the striking image of a human eye staring back at you. It takes a moment to parse exactly what it is—could this be Edwards (Andre Holland) inspecting his own troublesome eye in a mirror, perhaps? No, as it happens, although his ocular difficulties remain a background thread. The image is revealed to be part of a hypnotist’s trick, but the notion of people needing to turn their focus back on themselves and consider their positions from another angle is prevalent throughout the hour.

This is an episode that features one of The Knick’s more compelling and complete ‘self-contained’ stories in a while, as Thack (Clive Owen) visits the circus that was such an impressive location a few weeks back on Bertie (Michael Angarano) and Genevieve’s (Arielle Goldman) date. It makes sense that the show would revisit such an extensive and lavish set, and the various acts on display spark a medical interest in our favourite experimental doctor. Could hypnotism be used to beat addiction? Well, no, as we hilariously find out via some top-notch tomfoolery from Cleary (Chris Sullivan) later, but a pair of conjoined twins proves too much of a fascination point for Thack to ignore… 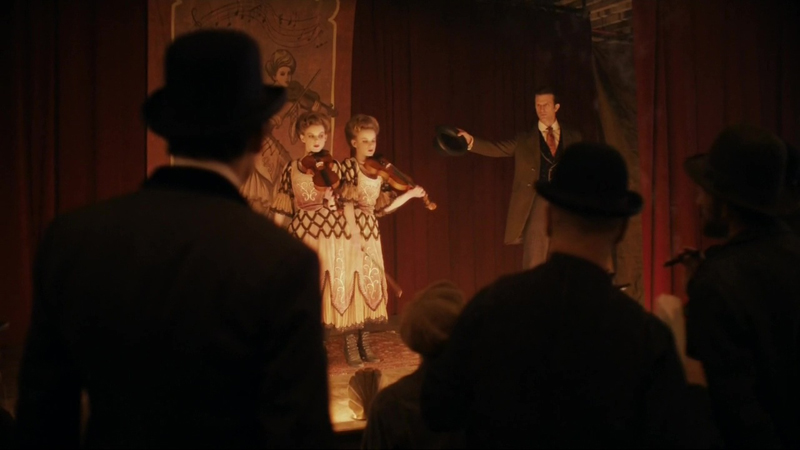 The visual of the twins is creepy to begin with—recalling the sinister sisters from The Shining, while repeated use of an x-ray machine evokes Frankenstein, with its sparking electricity and eerie green glow—but the more we get to know them, the more affecting the twins’ story becomes. Their boorish, abusive owner is one of the more distasteful characters the show has depicted, and the conjoined sisters two of its more sympathetic.

Thack looks after the two women and frees them from captivity—but will he be able to free them from their biological prison, and separate the pair safely? If the episode doesn’t quite get that far, the journey from Thack’s discovery of the twins to their ultimate liberation from Brockhurst is supremely effective, and in the wake of some fragmented and stalling plots in recent weeks it makes for a satisfying arc for the episode. (And had the hour been nothing more than sixty minutes of Cleary quizzing the twins on the logistics of being conjoined it would still have been worth the price of entry.) 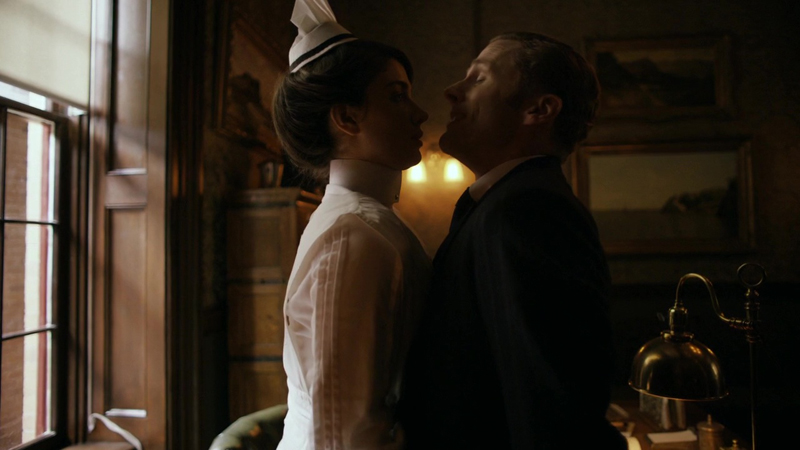 Speaking of Cleary, it’s a great episode for Sullivan, who not only gets the fun mentioned above, but is also tasked with beating a man with a crowbar (“Sorry about this”, he says afterward, and sort of means it), and with dragging a fundamentally lost Harry (Cara Seymour) back into the real world. Cleary may be hilarious—his profane cursing of the nuns who withheld Harry’s money is exceptional—but he’s also a thunderingly good man to his friends. His words to Harry are genuine, and they mean the world to her. How can a hulking brute of a man be so sensitive? Cleary is unquestionably the series’ best creation, and he and Harry flat-sharing has huge potential.

Perhaps the other main story in the hour was Bertie’s attempt to save his mother’s life, recruiting Dr. Edwards to assist in an unauthorised late-night surgery at Mt. Sinai. The big medical action is somewhat more genteel than usual, but no less riveting for that fact. It’s a more subdued and personal affair, given the family connection, and the hushed atmosphere makes it feel like we as an audience are intruding. The surgery fails, sadly, and results in Bertie’s resignation from the hospital, after Zinberg (Michael Nathanson) discovers their illicit activities. (Honourable mention to Andre Holland’s hilarious delivery of “I’m harder to explain”, as Bertie tries to justify their undertaking.) 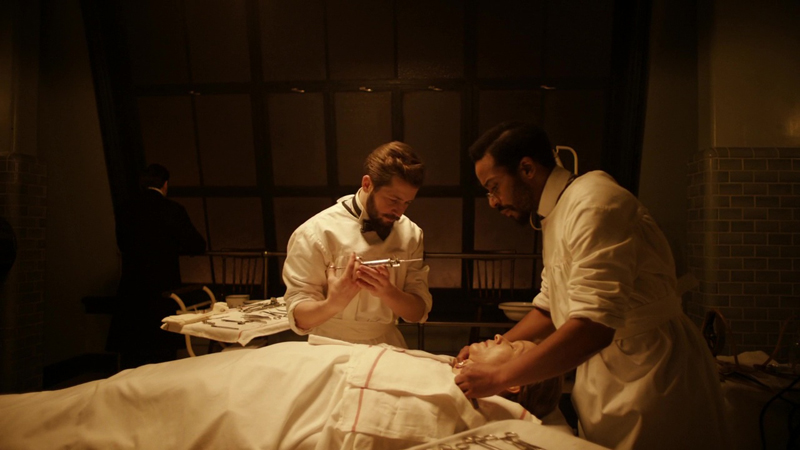 Bertie’s resignation scene sees directed Steen Soderbergh position the camera in such a way to make him look very, very small. Zinberg isn’t much taller than Bertie, but here he towers over him, his head hidden like the Mammy character in an old Tom & Jerry cartoon. Bertie is a child, being chided by a grown-up. And yet, what might have been devastating for him actually turns out pretty well. “You had the courage to try”, his normally disapproving father tells him of the failed surgery. “I couldn’t even look”. You can see all over Bertie’s face what those words of praise mean to him from a man who so rarely gives it, and seeing his father admit weakness may fundamentally change their dynamic. And, of course, Bertie is ultimately welcomed back to the Knick with open arms. Hurrah! Great work from Michael Angarano throughout.

Edwards, meanwhile, is a man in demand, as his friend from Harlem introduces him to black rights speaker D. W. Garrison Carr (Natre Mwine), who reveals he’s also in need of surgery. Edwards wants it to happen at the Knick, but Captain Robertson (Grainger Hines) refuses Henry’s request almost instantly, in another wonderful tracking shot (albeit only a short one). 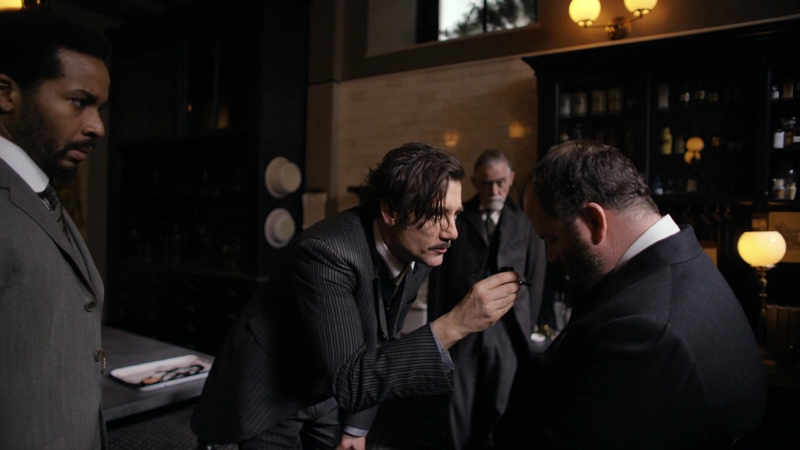 Elsewhere, the Gallingers have the doctor that mutilated poor Eleanor (Maya Kazan) over for dinner, much to Everett’s (Eric Johnson) distaste. The doctor believes that his actions are the reasons Eleanor is cured, and cites another case, in which a man’s teeth, tonsils, gall bladder, spleen, colon, and testicles were removed for a cure as proof. Gallinger quite rightly derides him, but is quite oblivious to the irony of decrying those actions, while he’s currently enforcing eugenics and sterilisation on boys with mental health issues. Everett Gallinger is not a man blessed with great self-awareness.

Nurse Elkins (Eve Hewson), meanwhile, takes the whore’s advice from a few episodes back rather to heart, and has Henry Robertson literally in the palm of her hand, as Hewson continues to be a far more interesting figure in her new, domineering persona. Barrow (Jeremy Bobb), meanwhile, is still wrapped around the little finger of his preferred whore, as she expertly manipulates him into providing her with a life of luxury.

And, in the series least compelling strand, Cornelia’s (Juliet Ryland) investigation into the death of Speight and the possible emergence of bubonic plague in New York continues interminably. This really should be a more exciting story: the threat of a plague outbreak ought to be intensely thrilling, but it just isn’t. We didn’t know Speight well enough to really care about his untimely death, and the investigation has been going on for far too long without interesting developments. It had better lead to something strong down the line, because at the moment it’s merely segregating Juliet Rylance from the rest of the cast, and wasting both her talents and her character. 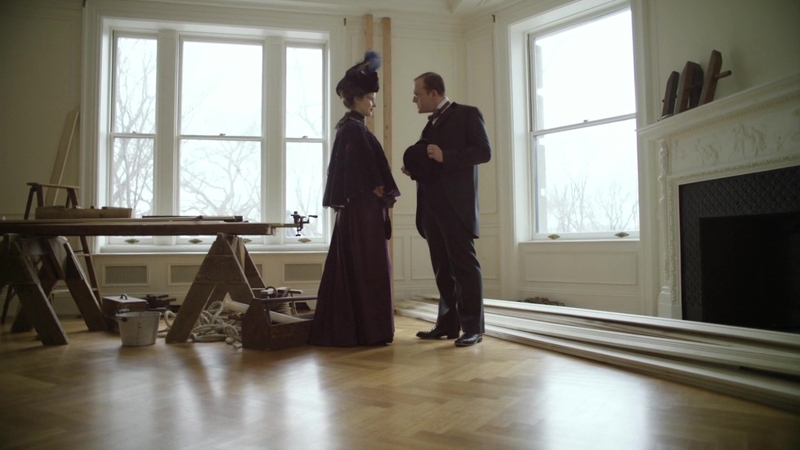 Ultimately, though, it all comes back to that opening image—that self-reflexive eye—and some words spoken by the twins. “Not like the story Mr. Brockhurst tells, is it?” asks one of them, after debunking the circus myth and recounting their horrific true-life experiences. “No Nika. Not even close”, replies Thack, solemnly. And nobody in The Knick ever looks at themselves—at the stories they tell themselves—and readdresses them. “I can save her”, Bertie says. He can’t. “She loves me”, Barrow tells himself. She doesn’t. “I can get a black man treated in the Knick”, thinks Algie. He cannot.

The episode ends on a moment of ambiguity, in a heart-breaking scene, beautifully performed by Jennifer Ferrin, and shot in a way that evokes the earlier Bertie/Zinberg scene. Abby has had enough of the torture of having a man she loves under her roof, and tells him to leave, as the camera gently pushes in on her face, and the fragility of her performance is crushing. Thack leans in and kisses her, and she clings onto him for dear life. Whether it’s a kiss goodbye, or an admission of love, we’ll have to wait and see. The story Thack tells himself is that he can live happily here with Abby. But if he turns that eye inward, and really looks at that story, is it truly the one he wants to star in?