It didn’t occur to me that Star Trek: Discovery was taking place after the events of “The Cage”, the Original Series’ unaired pilot with Captain Kirk’s predecessor Captain Pike (Jeffrey Hunter). After last week’s surprise reveal (well, for Trekkers) that we’re headed back to Talos IV, I expected “If Memory Serves” to foreshadow this version of Pike (Anson Mount) ending up there. Instead, it seems “The Cage” happened a few years ago but has lingered in Pike’s mind ever since, but the episode still works a prequel to “The Menagerie”—the Original Series two-parter that brought Pike back, using footage from “The Cage” that 1960s viewers wouldn’t have seen at the time.

This episode probably meant more to longterm fans of the show, given its Classic Trek throwbacks, and it even opened with a wonderful “previously on Star Trek” montage with clips of Hunter and Leonard Nimoy in “The Cage”. It’s odd seeing the inexplicable differences between recent history and present Discovery, of course, but I don’t think reshooting scenes with Mount and our new Spock (Ethan Peck) would have worked better. This sells the idea the series we’re on has a lineage to it, should you be curious enough to delve back into Trek’s decades-long history, and that’s wonderful. It’s something Doctor Who does all the time, of course, never worrying too much about the creative differences between old and new. It’s more entertaining to reference the reality of what the franchise’s history was than try and continually “explain” why 2019 Star Trek doesn’t match 1966 Star Trek.

Anyway, moving on. We got some big answers about Spock and the Red Angel this week, which was appreciated. I loved the sequence where Michael (Sonequa Martin-Green) piloted a shuttlecraft with Spock to Talos IV, arriving to find there’s nothing there but an enormous black hole they’re being pulled into, only for Spock to calmly point them towards the event horizon and reveal it’s an illusion to keep visitors away. That’s a clever defence mechanism. Once on Talos IV itself, we met Vina (Melissa George), a human woman from “The Cage” who was captured by the planet’s inhabitants—the bald, psychic Talosians—and expected to breed with Pike so they could psychically feed off their experiences and memories together. She’s since been living on Talos IV with an imaginary version of Pike, and Spock’s return is entirely down to his knowledge the Talosians can cure his addled mind with their psionic abilities. 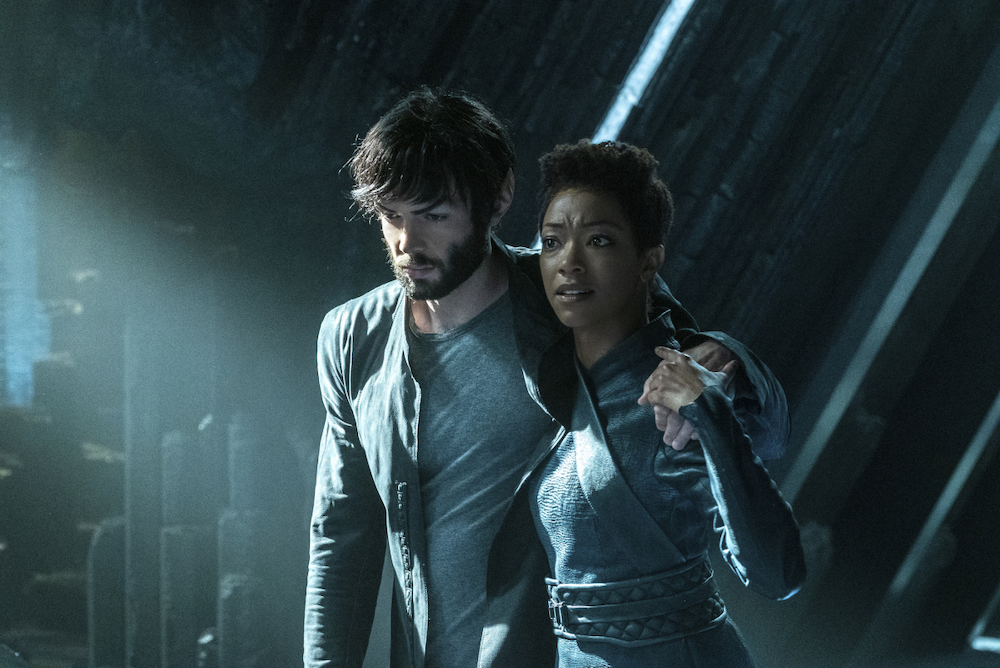 Of course, once Spock’s mental state was restored to normal, the biggest explanation this week concerned what he knows of the Red Angel entity. Considering this has been the season’s primary concern, I wasn’t blown away by the answers, but there’s certainly room to continue this story to a more enlightening conclusion. Right now, all we know is that Spock was visited by the Red Angel as a boy and shown a vision of Michael’s death after she ran away from home, to be eaten by a monstrous predator. Spock raised the alarm owing to the believability of the premonition, and Michael’s grisly fate was fortunately avoided when his parents scared the monster away. But the Red Angel also showed Spock a more alarming glimpse of the future, where an unknown enemy launches dozens of missiles that eradicate all intelligent life in the galaxy, and it scrambled his brain from processing time linearly. I’m not sure why that didn’t happen the first time around when he was a boy, exactly. Just go with it?

This certainly raises the stakes somewhat, although for a moment I wondered if the future catastrophe was the destruction of Romulus—which we know happens in this timeline, compelling an aged Spock to go back in time and unwittingly create an alternate timeline (where the J.J Abrams movies reside, separate to this ‘Prime Universe’). But I guess having Spock prevent Romulus from exploding would erase the reboot movies! That would perhaps have caused too much acrimony between TV Trek (owned by CBS) and Film Trek (owned by Paramount), so we instead have a larger but more cliched galaxy-sized threat. Let’s hope the deeper questions about the Red Angel’s identity and intentions are more inventive. 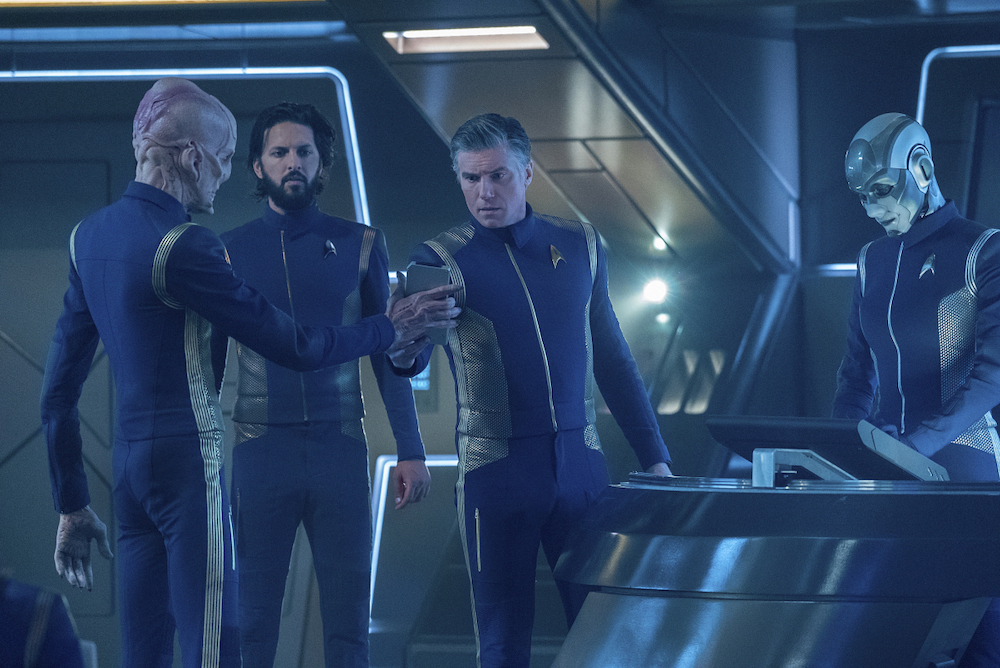 This was our first proper episode with Spock, after a few voiceovers and a non-speaking presence. Ethan Peck didn’t embarrass himself in this iconic role, but I didn’t see much quintessential Spock in his performance. It felt more like a generic Vulcan young adult, closer in tone to Sarek (James Frain), so that’s a shame. Nimoy has big shoes to fill, but Peck is firmly below Zachary Quinto when it comes to imbuing the essence Nimoy—and undoubtedly has a harder task because this Spock’s supposed to be exactly the one audiences were introduced to in 1966. Not younger, or from a different timeline, it’s one and the same.

This is perhaps more evidence the character didn’t need to be Spock and would have served a better function as a new Vulcan. The callback to “The Cage” wouldn’t have worked as nicely without Spock and Pike around, perhaps, but I could live with it.

The circumstances behind Michael and Spock’s estrangement were also revealed, as her memory of their split was relived thanks to the Talosians. Michael was afraid logic extremists would attack her new adopted family, so she tried to run away from home and had to break Spock’s (half human) heart in order for him to accept her sudden absence, by being especially mean to him. It worked, but now Spock knows the reason for her deception, so there should be no acrimony there to explain why Spock from the Original Series and movies never mentioned Michael. Maybe Discovery still has a way to retcon things further, we’ll have to see. 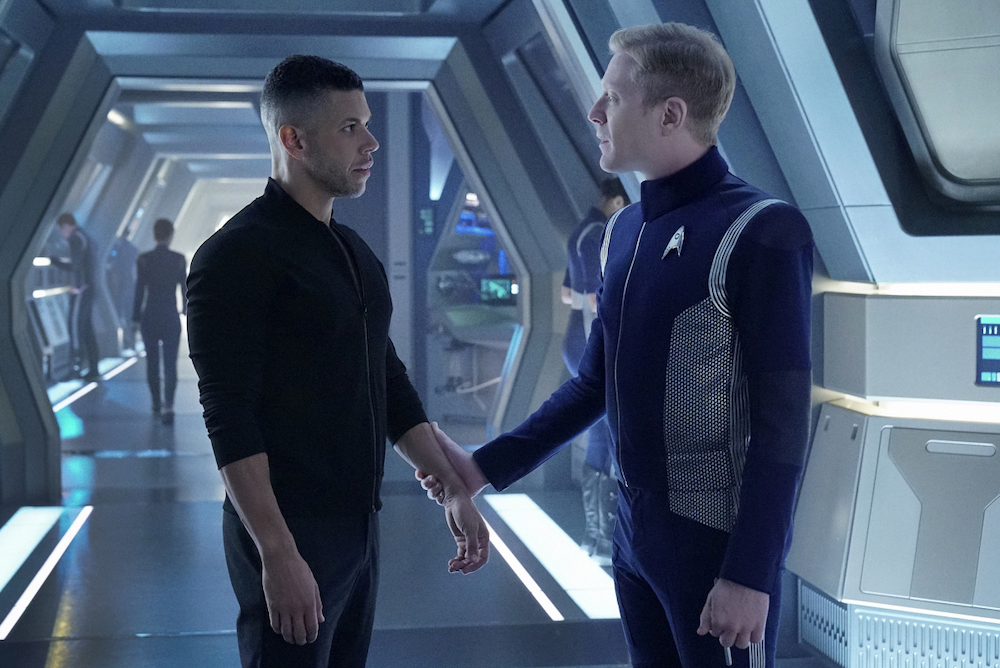 The subplot this week took the form of a simpler relationship drama, with Stamets (Anthony Rapp) trying to reintroduce Culber (Wilson Cruz) back into his life after his experience in the mycelial network. It doesn’t go well, as Culber isn’t the same man (literally) anymore, and Stamets finds it painfully difficult trying to enjoy “the miracle” of his dead boyfriend’s return now their rapport has gone. While it’s good the season hasn’t glossed over the enormity of what Culber went through for months, I hope this storyline resolves soon because it’s not particularly interesting and makes Culber terribly unlikeable.

That said, the bad blood between Culber and his “killer”, Tyler (Shazad Latif), provides a nice spikiness to scenes whenever they interact. It seems Tyler is everyone’s favourite punching bag these days! He was later framed for some misdeeds by Airiam (Hannah Cheesman), whom we know is under the influence of the Red Angel, but seeing as her “character” is mostly a visual presence on the Bridge with an array of electronic purrs, that’s not too exciting just yet.

Overall, “If Memory Serves” was a good salute to the Original Series and didn’t tread on its toes too much. The explanations for a few things weren’t earthshattering, but the exact identity of the Red Angel and why it’s trying to change the future in such a roundabout way are bigger remaining mysteries I hope Star Trek: Discovery can provide better answers for.

Written By
Dan Owen
More from Dan Owen
One of this summer’s biggest box-office disappointments was Disney’s Tomorrowland, from director...
Read More