A year after making his English-language debut, Louder Than Bombs (2015), Joachim Trier returned to Norway to make the sci-fi fantasy Thelma; a subtle but empowering movie about growing up, loneliness, and repression.

Eili Harboe is mesmerising as the shy, young Thelma, who’s just started university in Oslo, leaving behind two overprotective and strongly religious parents with a habit of checking her social media and lecture timetables.

Thelma starts as a realistic portrayal of the isolation involved after having flown the nest as a teenager. She’s scared of independence, which isn’t helped by her parent’s constant phone calls and suppressed childhood memories. After Thelma meets Anja (Kaya Wilkins) and starts to suspect she’s gay, this anxiety over her own sexuality manifests itself into a cosmic and supernatural disturbance. As the university semester continues, Thelma becomes increasingly overwhelmed by her intense feelings for Anja, which she’s too scared to even acknowledge.

Everyone thinks Thelma has started having epileptic fits, but then stranger things begin to happen and we learn Thelma has the ability to summon or coerce people by going into trances. Using seizures as the source of the supernatural element is a smart move, marrying something very real and human to the paranormal events, which is startling to watch.

There are a lot of narrative threads in Thelma, many of them coming at you from different angles. The film doesn’t know if it’s a coming-of-age story about female sexuality, a story about a strange girl uncovering her own mysterious past, or a narrative about parental control via religion which owes a debt to Carrie (1976). It’s more a lesbian love story interwoven with supernatural horror, so while there are some spooky scenes it may not appeal if you’re looking for more traditional horror.

Theres’ a Brian de Palma-like quality to Trier’s work here. His mixing of blossoming youth and existential dread is expressed less through action and more through aesthetics. Not much happens, but every decision and every word cause a ripple through Thelma’s life. The intensity is at times too unbearable to watch, maximised by the director’s use of close-ups and a cold colour palette.

The tension between Harboe and Wilkins is palatable, but at times Anja feels like little more than a MacGuffin. Every character, aside from Thelma and her parents, seem a little one dimensional and lack both backstory and power. Thelma’s so reserved and isolated that at times she feels like a non-entity who’s more appealing to watch when in the company of her parents (played by Ellen Dorrit Petersen and Henrik Rafaelsen).

Its unreliable narrator trope is a little over done, as audiences aren’t supposed to trust our heroine, which feels like a disservice to her character. In a slow-burning film the whole “is it a flashback or is it a dream sequence?” debate feels out of place and never adds anything to the narrative. Scenes play out slowly, perhaps too slowly, and rely more on imagery than jump-scares and gore. The film does excel when it comes to asking theological questions and its biblical imagery. “Is it religious paranoia or is Thelma dangerous enough to frighten her parents so much?” is one of the most effective questions the film asks. Much like The Witch (2015), Thelma is a film for the #MeToo movement; a story about the terror some feel when confronted by a woman with self-awareness about her power.

Thelma may sell itself as a supernatural film, but in reality it’s a coming-of-age drama about a girl who finds her feelings so scary they fracture reality. The film works better when considered on a metaphorical level, playing on the fear of women expressing their emotions and the cultural fear of female sexuality. Not an easy watch, at times Thelma is just too low-key and slow to recommend, but if you have patience its quiet honesty does pay off.

There are a couple of informative yet unimaginative extras on the Blu-ray disc: a 9-minute interview with the director, and a 5-minute segment from Harboe. There’s also the usual behind-the-scenes featurette, which consists of 6 vignettes, and the film’s Theatrical Trailer. The extras appear to be promoting Trier’s earlier films than anything else. 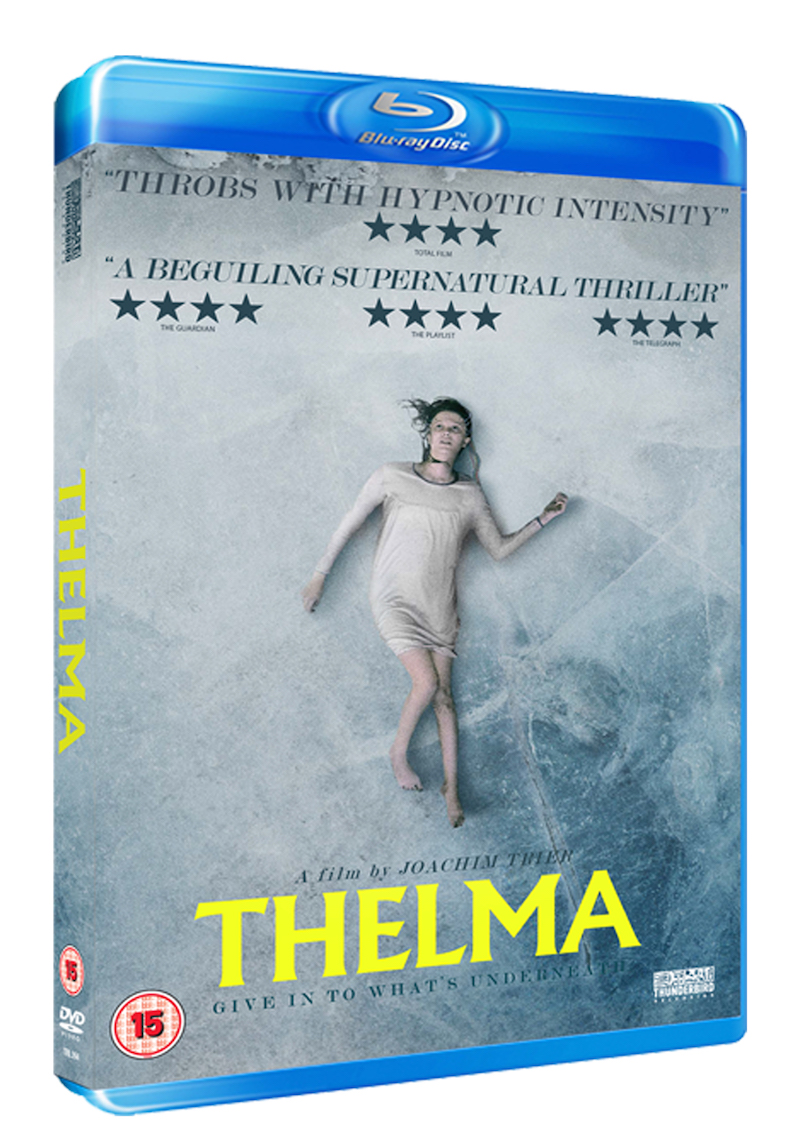