Saw: The Final Chapter (2010) was the seventh instalment, filmed in 3D, and despite more success at the box-office (grossing $136 million from a $20m budget), Lionsgate wisely strangled their golden goose before the saga’s labyrinthine plot became impossible to follow without a fold-out diagram. I’d argue it had already reached that point with Saw IV (2008), when the show had to go on without its villain, John “Jigsaw” Kramer (Tobin Bell), who died in the previous movie. Uh, spoiler. 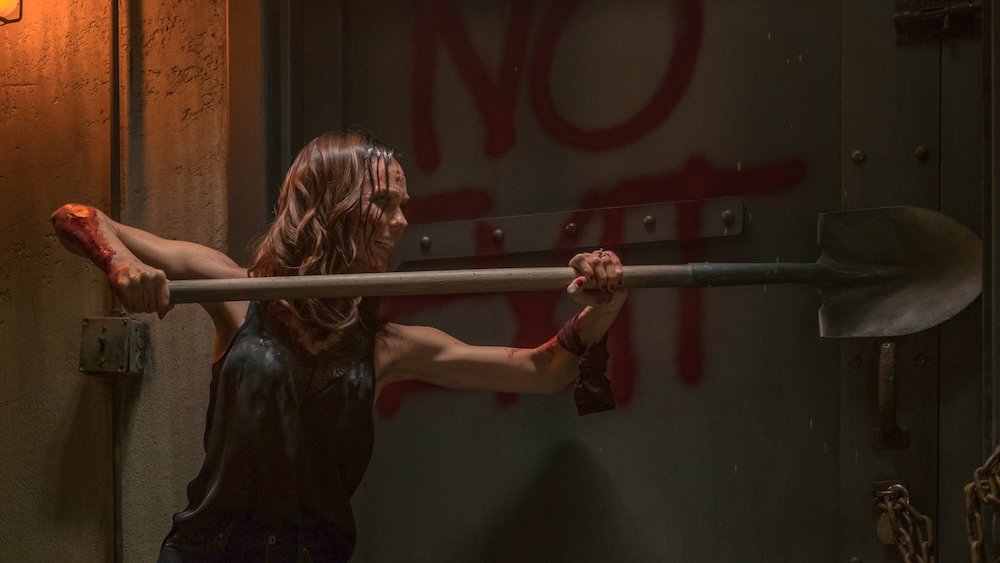 Jigsaw marks the unlikely revival of this love-it-or-hate-it franchise, seven years after the now laughably titled Final Chapter. One can only imagine Lionsgate believe ‘Saw fatigue’ has passed and there’s a new generation of teens who don’t have anything better to do come Halloween with their money. That the Saw films have collectively grossed $970m and most of them only cost $10m to produce, I’m sure is another motivating factor…

10 years after John Kramer died of cancer, it seems another deadly game has begun. Forensic pathologists Logan Nelson (Matt Passmore) and Eleanor Bonneville (Hannah Emily Anderson) are studying the corpses of victims of someone’s torture traps, beginning with a  man who was pulled onto a wall of whirling buzzsaws by a chain with a metal bucket on his head. As they search for clues on the dead bodies about where they were killed, Detectives Halloran (Callum Keith Rennie) and Hunt (Clé Bennett) start to consider the possibility Kramer’s returned from beyond the grave.

In true Saw fashion, there’s narrative jiggery-pokery going on throughout the movie, which gets fully explained in the denouement, but suffice to say we follow two storylines: the investigation into the corpses, and a ‘locked room mystery’ set inside a farmyard barn, where five strangers are pushed through a variety of bloodthirsty challenges that require they cut their own flesh, sacrifice a limb, and suchlike, to escape. 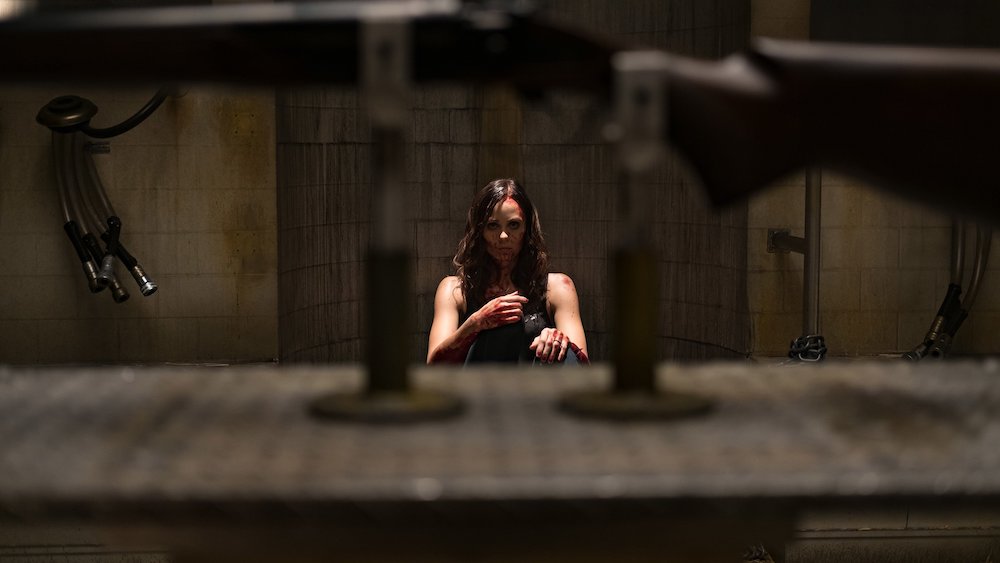 After eight movies, most of the traps have lost their ability to shock (being variations on old standards), some make no real sense on a subtextual level, and one’s just embarrassingly lazy (the grain silo), but a couple are enjoyably fiendish. The emotional turmoil underpinning them can still elicit squirms and winces. The heart of the Saw movies is presenting audiences with fucked-up scenarios, where we can safely put ourselves in the mindset of the poor unfortunate victims, wondering what we’d do in the exact same position. It’s a simple but effective formula.

Part of the reason I was anticipating Jigsaw more than any of the other sequels, post-Saw III (2006), is that it’s directed by The Spierig Brothers; Australian filmmakers who made two good low-budget in Daybreakers (2010) and Predestination (2014). It’s a weird decision for them to get involved with this disreputable franchise, but one assumes they must be fans or loved the script by Josh Stolberg and Peter Goldfinger. Or they’re big fans of the franchise.

Whatever their reasoning, the Spierig’s deliver a film that’s visually lighter than how bleak and depressing the previous sequels became. It has all the gore and inventive moments you’ve come to expect from Saw, but none of the stomach-churning sadism. 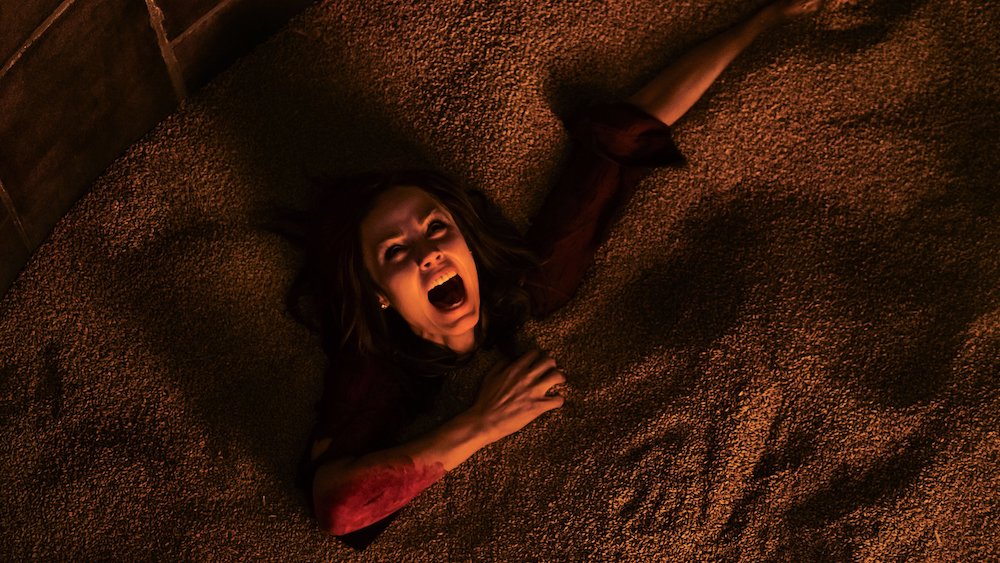 I’d rank it as the fourth best Saw movie overall, and for any “part 8” to land mid-table is a definite triumph. It helps that they manage to do “unthinkable” things like bring John Kramer back to the screen, in a way that doesn’t betray established events. Most fans will be a step ahead of the filmmakers, primed to expect some misdirection in the plot, but I still found myself guessing one twist and falling prey to another. It helps to sit back and let the movie just do its thing, rather than spend your time trying to suss out the traditional “big reveal”.

Is Jigsaw the reinvention of a dormant franchise that will now inspire more sequels? Perhaps not. It’s just Saw VIII, only with some distance to ignore a lot of the narrative clutter that had formed around those earlier films.

There’s no attempt to retcon the franchise and upset fans, or find a way to properly “reboot” it from the ground up. The success of the Saw movies has become oddly aligned to the must-have presence of Tobin Bell (or his raspy voice), plus other paraphernalia like ‘Billy’ the cycling puppet. Doing away with those ingredients and finding a different backstory for these torture games just isn’t going to happen. It’s probably the wisest choice, but I’m sure Lionsgate executives are ruing the day they let Saw’s villain die so unequivocally, in an effort by the creators to prevent the slew of sequels that happened anyway… 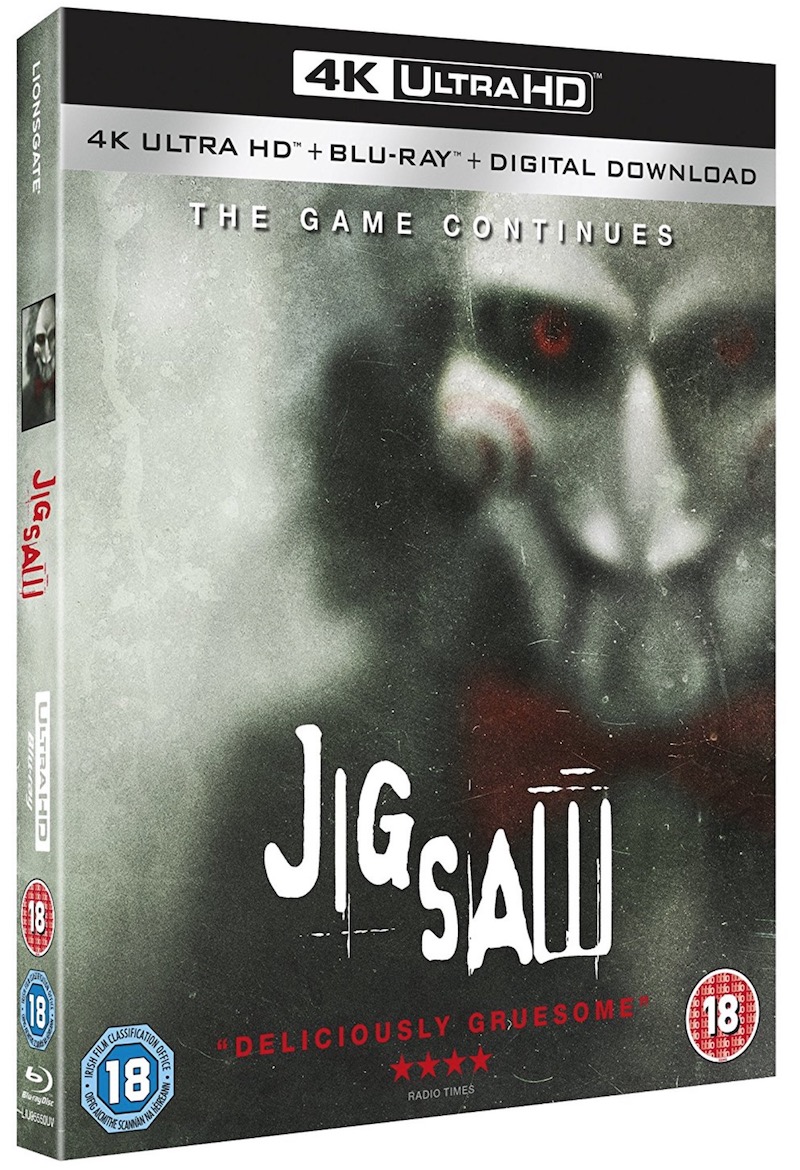 The first Saw movie to be given the UHD treatment, Jigsaw was actually shot in 2.8K, then a 2K digital intermediate was used in post-production, before the image was upscaled to 4K in 2.39:1 ratio. Nevertheless, the image reveals more detail than the standard 1080p Blu-ray, and clearly benefits from the High Dynamic Range (HDR) in sequences that require punchy colours or a noticeable contrast between light and dark. In terms of the audio, you get a Dolby Atmos mix on both the UHD and Blu-ray releases, which I don’t currently have the equipment to enjoy. The Dolby Digital HD downmix was nevertheless very enjoyable, with clear dialogue and lots of rear speaker atmospherics for the traps.