There are so many impeccably polished, characterless blondes in Bombshell that it can be difficult remembering who’s who. But that, of course, is part of the point of this film, which tells the half-true story of Roger Ailes (John Lithgow) and Fox News, the influential conservative US TV channel which he ran for 20 years before being accused of various sexual harassments and forced by Rupert Murdoch to resign in 2016.

Women were allowed have prominent roles at Fox, Bombshell tells us, but only if they conformed to its preferred stereotypes in every way: one, Jess (Kate McKinnon, in the film’s best performance) is more worried about being exposed as a Hillary Clinton supporter than as a lesbian.

This ambiguity about women (simultaneously important and subordinate, encouraged to be seen but never truly heard) is shown as pervading Fox and (it’s implied) much of its Trump-cheering audience. And it’s at the heart of the drama, too, because many if not all of Bombshell’s women are seemingly complicit in the culture that allowed Ailes’s abuses to continue for so long. 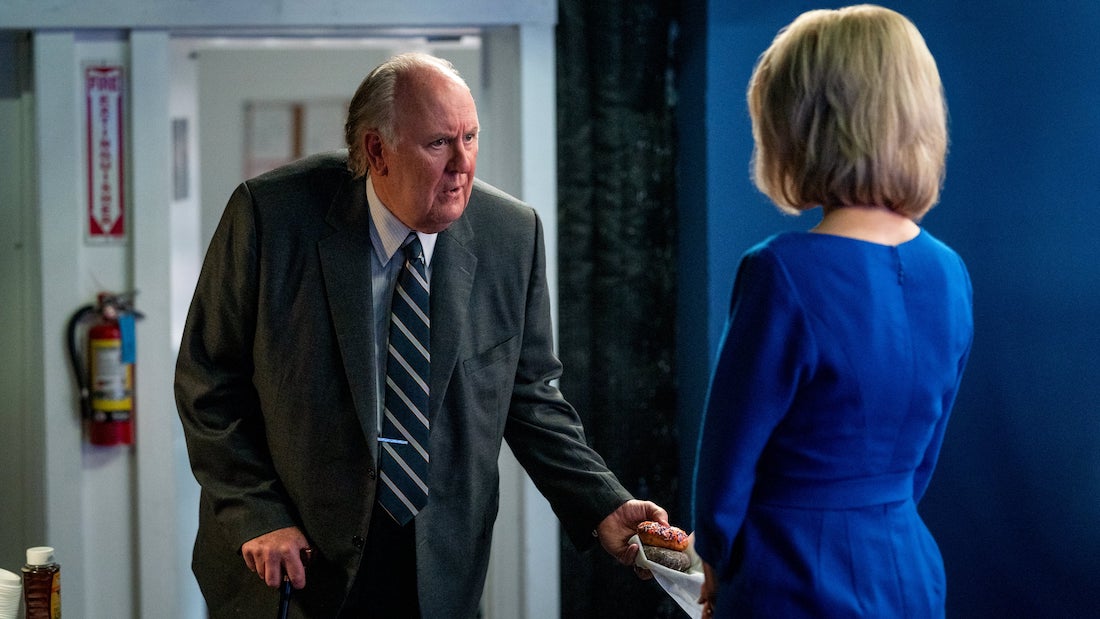 (Note: I’m talking here about the movie and not the real people being portrayed, whom it may not represent with absolute accuracy. An opening title acknowledges this is only a “dramatization inspired by” true events and some entire characters, most notably Margot Robbie’s Kayla, are fictitious.)

One of these Fox women, Jeanine Pirro (Alanna Ubach, convincingly vile) is described as a “founding member of Team Roger” and defends him vehemently. Even Megyn Kelly (Charlize Theron), who takes a key part in amassing women’s testimony about Ailes’s activities, confides she likes the man. “I refuse to be the poster girl for sexual harassment,” she says, and the message is clear: of course harassment by Ailes and others matters, but to many of the women at Fox, their careers matter a great deal as well. The fact so many women are reluctant to come forward even after Gretchen Carlson (a difficult-to-recognise Nicole Kidman) has sued Ailes, illustrates how at Fox, and by extension corporate culture at large, abuses have often been put up with as part of the price of getting ahead.

Bombshell’s major weakness is that it never confronts this issue full-on. Megyn comes closest to hitting the nail on the head when, discussing how she’s gone public about harassment, she says “I’m either damned for doing it or damned for not doing it sooner”. Torn between career-driven company loyalty and her moral duty to fellow victims and other women, she ends up pleasing nobody. 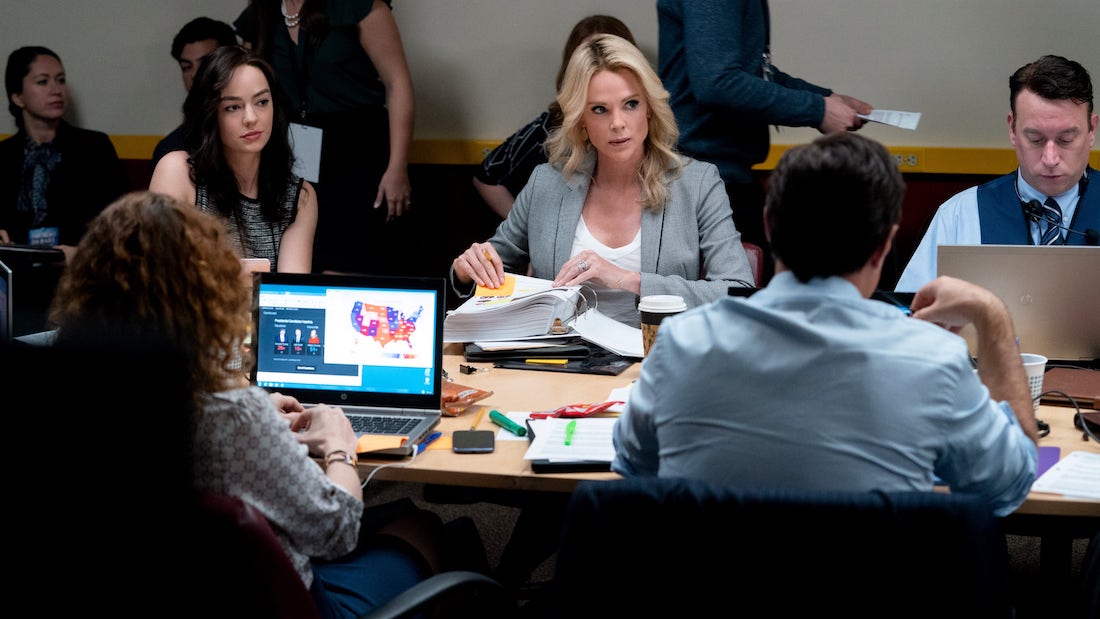 Yet the film ultimately avoids asking the obvious question: who knew and did nothing? For example, it’s hinted that Ailes’ personal assistant, Faye (Holland Taylor), is fully aware of what goes on behind his closed office door…. but does she play an active part in his systematic exploitation of young female employees, procuring and covering up for him, or is she the sweet elderly lady she seems to be at first glance. A woman perhaps suspicious of her boss’s motives but certainly not to blame herself? Similar doubts must, surely, arise over other senior staff.

It is, then, one of those movies about real-life events that rely too heavily on the accepted significance of its events rather than fully exploring them. It’s as if director Jay Roach hopes viewers awareness of the important issues will compensate for a certain flatness in the drama, a lack of extended tension, and less emotional impact despite individual scenes functioning quite effectively. The Report (2019) is another notable recent example.

That’s a little surprising coming from Roach—perhaps still best-known for his Austin Powers trilogy and Meet the Parents (2000), who went on to make politically-oriented films like The Campaign (2012) and Trumbo (2015)—and even more so from writer Charles Randolph, who gave us the fact-based and crackling The Big Short (2015). 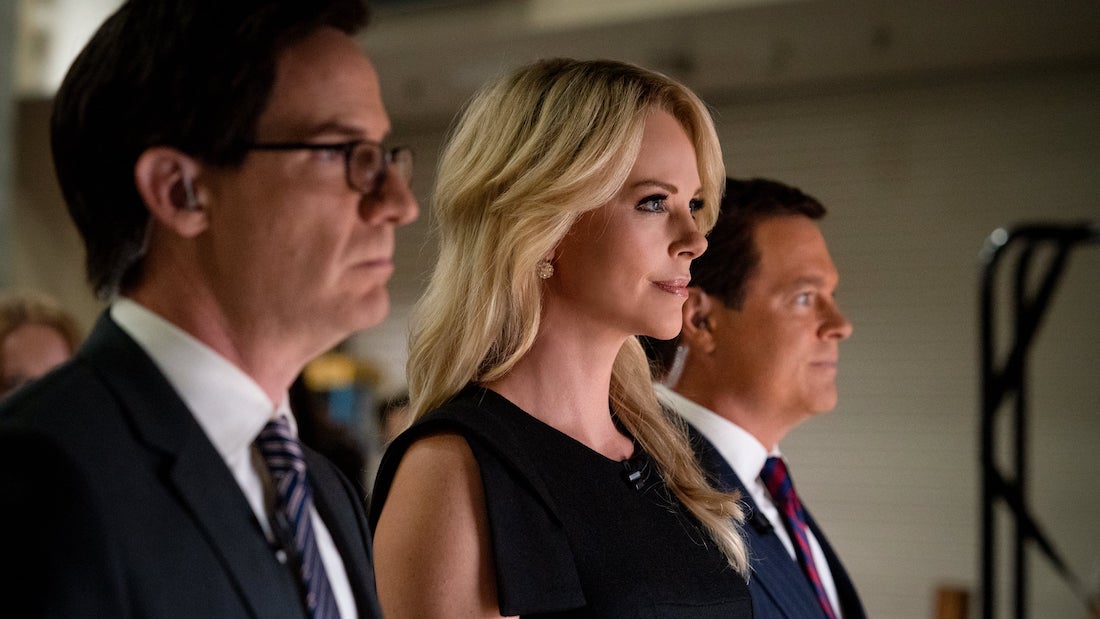 What saves Bombshell from feeling too dutiful, however, are the performances. Of the three principal female leads, Robbie as Kayla is perhaps the strongest; young, vulnerable, often struggling hard to appear more assured than she really is. Ever so keen to work at Fox, Kayla describes herself as “an influencer in the Jesus space”, and her pain when this idealism is confronted with ugly reality is harrowingly portrayed. A scene where Kayla confesses on the phone to Jess (whom she has had a brief affair with) that she eventually accepted Ailes’s advances is sad and powerful. It brings home what harassment means.

Saturday Night Live star McKinnon’s great too, as I’ve mentioned, not least with the cynicism that she displays when she’s describing to the novice Kayla the principles of news judgement at Fox: the ideal story is one that “would scare my grandmother or piss off my grandfather”, she says. “Frighten, titillate, frighten, titillate.”

Kidman and Theron oddly come across as less interesting on a human level, despite being the primary drivers of the narrative. Unlike young Kayla, they’re established big names at Fox and most of the time they’re simply too collected and competent for us to worry about what happens to them. Although, of course, that apparent contradiction is also an idea the movie is (reasonably enough) highlighting. 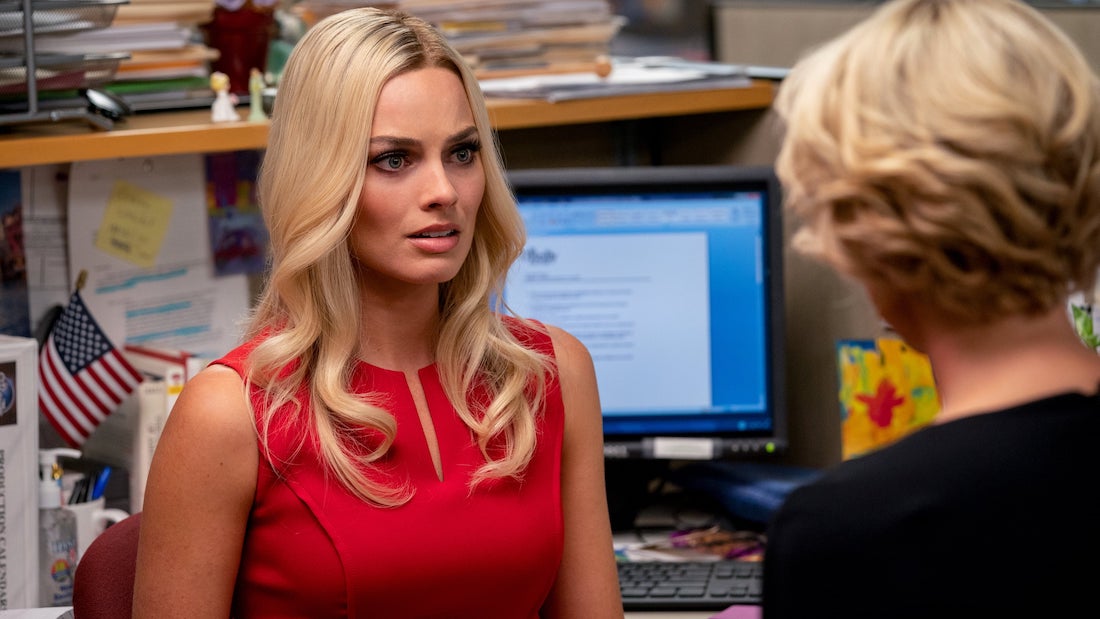 But other performers in smaller roles, on both sides of the fight, more than make up for this, including Allison Janney as Roger’s lawyer, Richard Kind in a droll turn as Rudy Giuliani, and Ben Lawson as Lachlan Murdoch (Rupert’s two sons are played by him and brother Josh, which is a nice touch). One of the movie’s big air-punching moments comes when he faces down Ailes in the Fox newsroom, and you’re glad somebody finally has the guts to.

Malcolm McDowell, meanwhile, is forcibly plausible in a physical way as Murdoch himself, though his accent seems a bit wavering, while Andy Buckley as his lawyer is just one more in a terrific ensemble cast.

And then there’s John Lithgow, who’s monstrous and irascible as Ailes himself, and looks the part in a Jabba-like latex fat suit. He’s blusteringly confident, but we get distinct glimpses of the man’s paranoia beneath that suggests fundamental instability: he believes the Obama White House is planning to assassinate him and is seen storming through the Fox newsroom panicking about anthrax. 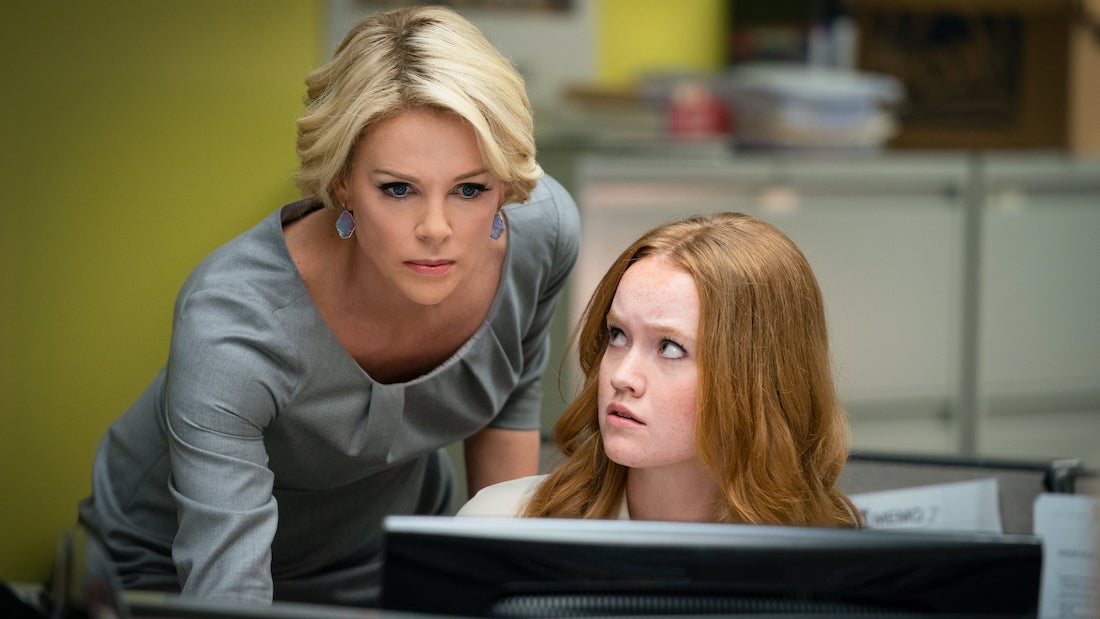 Ailes’ grooming technique (and that is the appropriate word) is depicted in one of the movie’s most uncomfortable sequences, where he interviews Kayla about her career prospects and persuades her to partially strip. His standard pretext is that “it’s a visual medium”, and she unhappily complies because she wants a promotion. It’s a scene that encapsulates the awful reality at the heart of Bombshell—the situations into which women can be forced by a male-led corporate culture that emphasises utter fealty and discretion—and Theodore Shapiro’s score contributes to the uneasy, slightly surreal air.

There’s verve in Roach’s direction, too, even if it’s often as superficial as the output of Fox News. Most of the time he gets the tone just right, though—for example during the expository opening of the film with a tour of the station’s offices, which is relentless bouncy in an American TV news style. And there are some smart smaller touches, too. Megyn says “Trump has a real problem with women”, a colleague asks “can you back that up?”, and immediately a huge binder labelled “Trump and women” comes into view.

Randolph’s screenplay also has moments of pure genius. If there’s a single best line in the movie it must be the protest of an employee at the small conservative newspaper owned by Ailes’s wife: “Sushi’s not liberal food!” 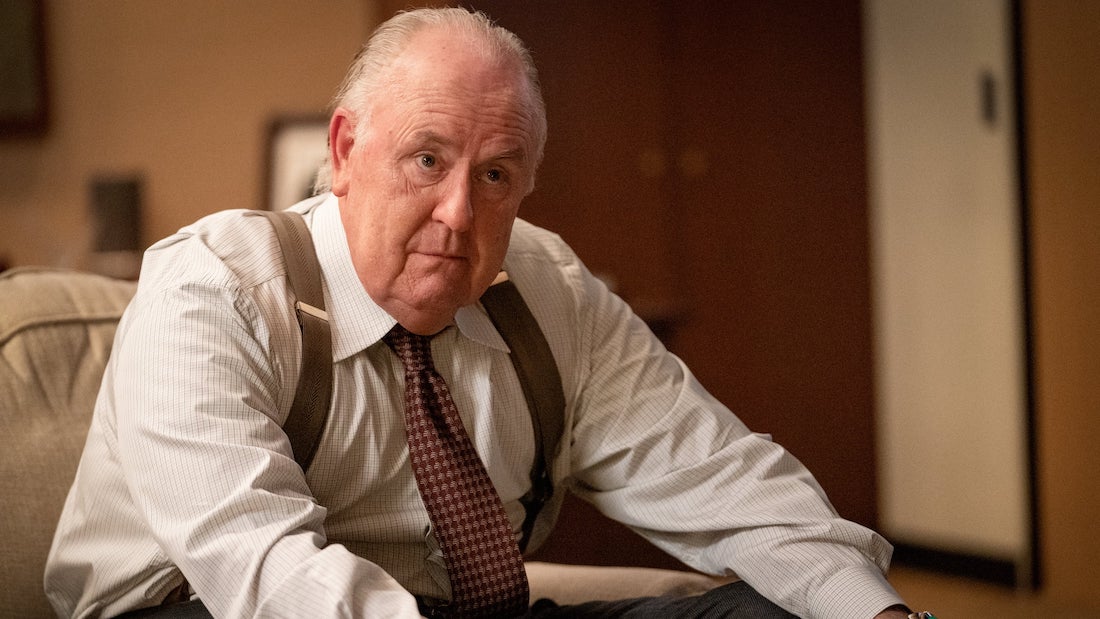 More serious scenes are often handled adroitly, like when Megyn reveals to Kayla that she too had been harassed by Ailes, and Kayla’s initial gratitude for Megyn’s sympathy turns to resentment that she didn’t speak out earlier and stop him.

Less pleasingly, the use of voiceover can be confusing (it’s not always clear who’s talking), and having the main characters’ feel they’re trapped at Fox and unlikely to be hired anywhere else doesn’t quite ring true. It surely needs to be clearer that this is just their perception because they can’t imagine a life outside the New York television fishbowl.

Bombshell is outstandingly acted and well-made, for the most part. But there are times when making fun of American conservatism’s more absurd facets doesn’t sit well with the unpleasant tale of Ailes and his workplace abuse. And even if individual scenes prove moving or disturbing, taken as a whole the film lacks some gravitas. Being about a powerful subject doesn’t automatically make a film itself powerful.

Every bit as much as Fox News, then, Bombshell is slick and thoroughly watchable… but despite its claims to the moral high ground, in the final analysis, it proves less substantial than it ought to have been. 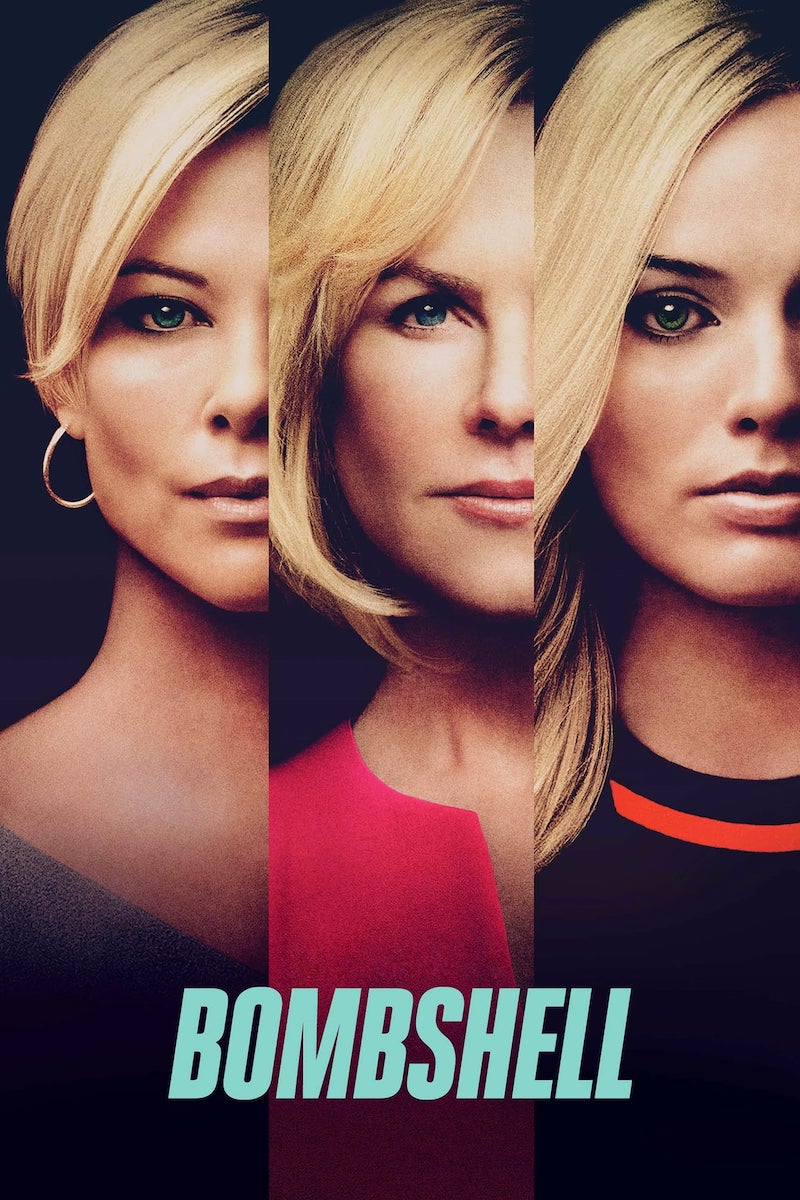