Where to begin? I’ve perhaps been too kind to The X-Files this year, because it was a formative television show for me as a teenager, so I was prepared to cut it some slack. All of the episodes this series have had problems (with the exception of “Mulder & Scully Meet the Were-Monster”, which wasn’t originally intended for the show), but this penultimate instalment is hard to defend. “Babylon” was a bizarre, tonally awkward, often rather embarrassing mishmash of ideas, and something I’d rather forget happened. The X-Files delivered far worse during its original run in the ’90s, and I’m aware that only have six episodes means a bad hour seems much worse (as it drags the overall score down by 16%), but that’s no excuse for something this shoddy.

During the opening scene—which actually resembled something from Homeland, or perhaps an errant Millennium itch writer-director Chris Carter had to scratch—we saw two ordinary Muslim men bomb a local art gallery by detonating suicide vests, in protest of artwork featuring the prophet Muhammad it transpired. Usually with X-Files teasers, there’s something otherworldly at work, but “Babylon” immediately had me raising an eyebrow because its inciting incident was presented as something very realistic; tragic and frightening (the shot of people fleeing the gallery on fire were unnerving), but not exactly X-Files territory. 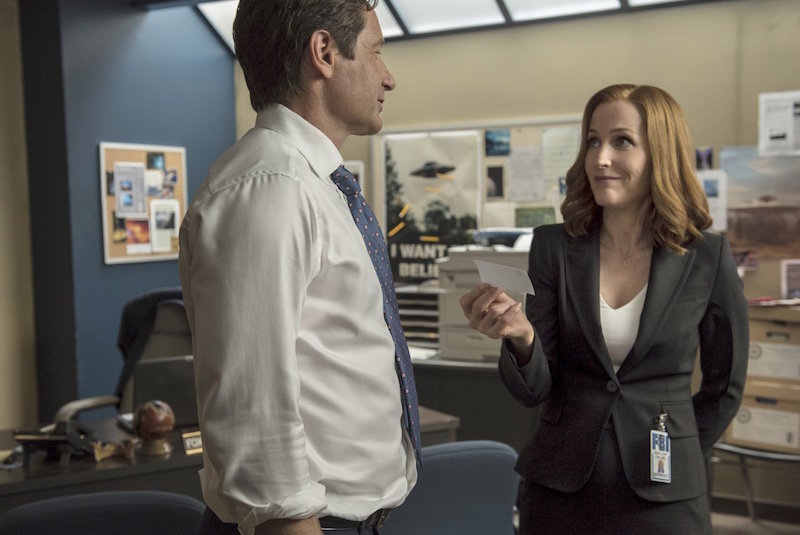 How do you say ‘howdy partner’ in Arabic?—Mulder

Indeed, it later became clear that the only weird aspect of this story was related to the surviving bomber, Shiraz (Artin John)—who’s in hospital on life-support, his skull now a horrifying concave shape—and two opposing theories about how to interrogate him. Scully (Gillian Anderson) favoured a scientific imaging scan of the man’s brain, hunting for electrical signals that may suggest the answer to questions being asked; Mulder (David Duchovny) wanted to take some mushrooms and, well, assumed being in an altered state would allow him to communicate with a man halfway between life and death. (It was about now that I started to realise how excellent Fringe was, as Walter Bishop would’ve combined both their ideas and built the necessary gizmo himself in an afternoon.)

Anyway, weirdly, the episode wasn’t content with simply focusing on this situation. Perhaps intended to create some added interest (although it actually felt like a misjudged excuse to setup a spin-off TV show), two new characters were thrown into the mix. Two young FBI agents by the names of Agent Miller (Robbie Amell), a handsome guy who has an open mind and is delighted to meet his hero Fox Mulder; and Agent Einstein (Lauren Ambrose), a beautiful red-haired skeptic who thinks Scully’s wasted her career in the basement with a lunatic. Miller and Einstein were very obvious successors-in-waiting, should Duchovny and Anderson decide the prospect of making more episodes isn’t a constructive career plan. Or maybe Carter simply realises his famous duo have run their course because they’ve accrued too much history? It’s hard to get at what made The X-Files such fun back in the old days, now Scully’s practically a believer, and Mulder’s less likely to run with whatever crazy theory crosses his mind. The pair no longer function in the way they were originally intended (or how a show like this needs them to), even if their bond has matured in a pleasant way. 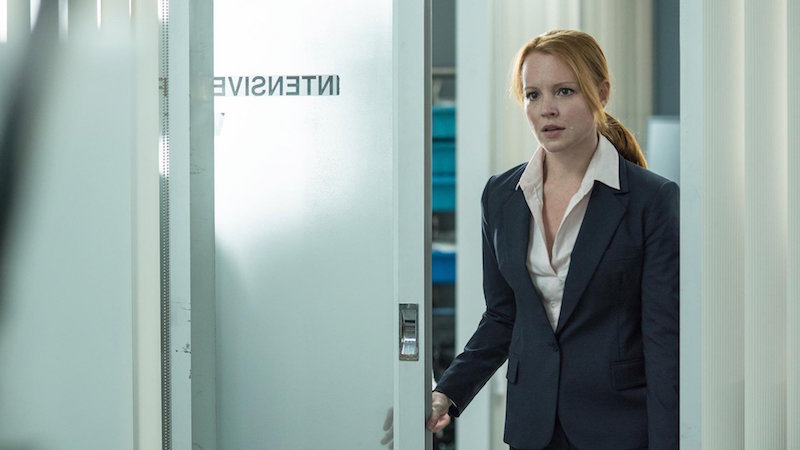 I’ll give you two minutes, Agent Mulder, and then I’m due back on Earth.—Einstein

I have to question some of the creative decisions taken here, because Miller and Einstein’s presence was treated like a wink-wink joke (Scully once studied Einstein’s twin paradox, geddit?), and this tone infected the entire storyline very negatively. There were times when “Babylon” was clearly going for laughs—with Mulder and Scully interacting with their young counterparts—but all within the context of a plot about suicide bombers, religious fundamentalism, and the power of the spoken word. Maybe there was a way this could have worked, but Carter spectacularly failed to hit the right note, or find a tone that could bind everything together.

By the time we got to the sequence with Mulder tripping balls (strutting around town, going to a line dance dressed as a cowboy, then finding himself aboard a ship being whipped by Cigarette Smoking Man to the tune of Tom Waits’ “Misery is the River of the World”), I just wasn’t sure what to make of it. I’m sure it’s made for some very entertaining animated GIFs on countless X-Files Tumblrs, and it was undoubtedly fun in isolation, but what on earth was Chris Carter thinking doing that sort of thing in the middle of a story about a comatose Muslim radical and the threat of another terrorist bombing?

What frustrated me the most about “Babylon” is how there was actually some good ideas swirling around, which just got lost amidst the weirdness and half-baked comedy. The final scene between Mulder and Scully, walking hand-in-hand in a field, vocalising some of this episode’s thematic intention, was undoubtedly very good. There was a story here about communication in all its forms, and how words can affect very real change. It also touched on questions about living in a world where religious extremism needs to be combated in ways that don’t fan its flames. I just wish it hadn’t been wrapped around such a very silly, very messy story.