The shadow of Breaking Bad loomed heavy over Better Call Saul last year. I was quietly confident this spin-off would make for good television, and that proved to be true—thanks in no small part to the writers finding hidden depths to Saul Goodman (Bob Odenkirk) during the years before he met Walter White.

We learned that ‘Saul Goodman’ himself was a façade, as Better Call Saul’s first season explained the tragic fraternal backstory to Jimmy McGill—the garrulous con artist who looked up to his high-flying lawyer brother Chuck (Michael McKean), did everything he could to win his sibling’s respect through hard work and perseverance—including becoming his brother’s nurse maid after he became mentally ill—but found that self-improvement’s a road to nowhere if your own family believe a leopard never changes its spots.

If there was one, very minor, criticism of the excellent first season, it was perhaps the pacing. While common to criticise drama for being too slow, I’d argue that Better Call Saul had the opposite problem. We covered a lot of ground in the first ten episodes, and with Chuck exposed as a manipulative liar whose professional pride wouldn’t let him accept his little brother’s ascent, together with Jimmy forming an alliance with ex-cop Mike Ehrmantraut (Jonathan Banks), the scene was set for the Mr Goodman we know and love to emerge fully-formed. 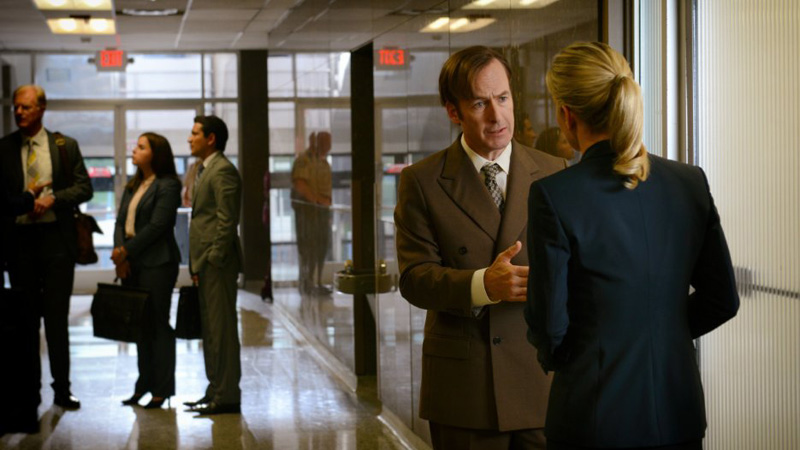 But that would be too much, too early, so it’s no surprise season 2’s premiere “Switch” touches the brakes. The good news is that’s not a negative, because one of Breaking Bad’s undoubted strengths was how meticulous it was about telling its own story. The highs can only be truly dizzying when you lay the foundations properly.

Consequently, “Switch” was a slow-burn experience, but all the more enjoyable for taking its time. It now seems likely to become a tradition that every season’s opening scene will take place in the show’s future—an undefined time after the life-changing events of Breaking Bad, with Jimmy working at a Cinnabon in Nebraska under the false name ‘Gene’. Shot in artful monochrome, these scenes have a deep melancholy about them, as the ordinarily loquacious and extroverted Jimmy spends his days trying to look anonymous with a baseball cap and thick moustache. How the mighty have fallen. The cruellest thing is that Jimmy’s later life is a self-made prison he’s unable to break out of—brilliantly dramatised in the moment Jimmy accidentally locks himself in a room at the Cinnabon, and opts to spend the night trapped inside rather than raise the alarm and draw unwanted attention from the police. Jimmy’s wall etching that ‘SG WAS HERE’ the only clue to both the truth of who he really is, and the psychological torment as he endure a lowly life of obscurity. 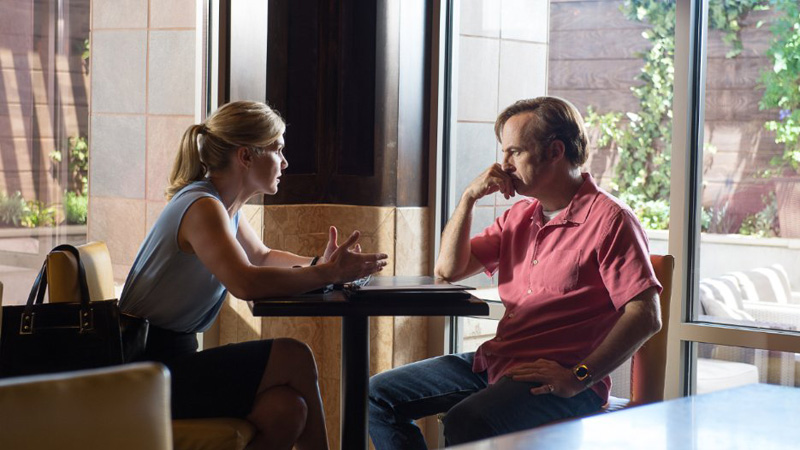 In this show’s usual time period of 2002, Jimmy was ironically trying to distance himself from the type of hard-earned, honest success his moustachioed future self would likely give anything to return to. The chance to work for prestigious legal firm Davis & Maine was his for the taking, but for Jimmy it’s something of a hollow prize—what truly mattered to him was making his big brother proud. Something that seems to be impossible now, and perhaps forever. Instead, Jimmy was literally adrift by himself—relaxing on an armchair inflatable in a luxury hotel pool, cocktails at arm’s reach, and his trusty phone in a waterproofed bag.

It took one thing to pull Jimmy back to shore: his best-friend and arguably the only person who truly believes in him, fellow lawyer Kim (Rhea Seehorn). Kim was perhaps another of the first season’s missteps, as her role never felt integral and she was overshadowed by everything else going on. I sensed some character reparation this hour—mainly in the enjoyable sequence where Kim collaborated with Jimmy to con an arrogant stock trader into paying their massive bar tab, letting him schmooze for their business (as they played inheritors of their South African uncle’s small fortune). It wasn’t a particularly good scam—truthfully, I was waiting for a funnier climax or a bigger twist that didn’t land—but it was good to see Jimmy and Kim doing something together. She was essentially a one-night only replacement for his dead friend Marco from Illinois, although with the added bonus that getting a taste of Slippin’ Jimmy proved irresistible to Kim, and they spent the night together. Hopeful their unusual romance will continue and become a much bigger part of the season. 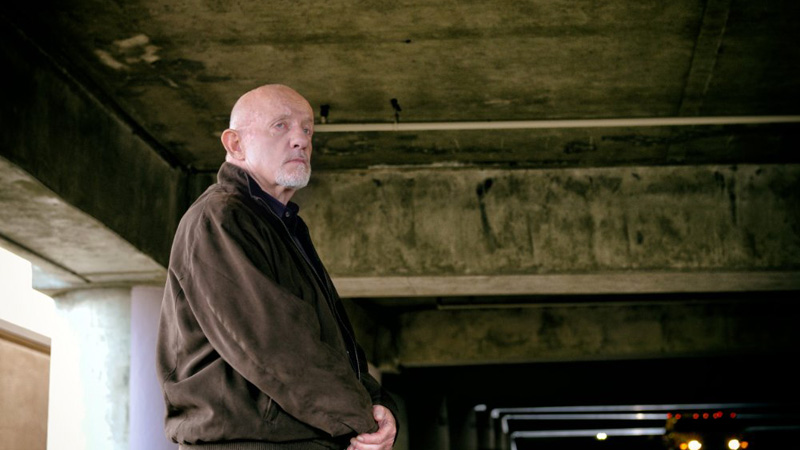 While there was a natural focus on Jimmy for this premiere, as he eventually decided to get back to work, there was time for an intriguing subplot that’s sure to be returned to. Pryce Warmolt (Mark Proksch), the “I.T guy” who’s getting rich by selling stolen prescription drugs to local gangster Nacho (Michael Mando), also decided to go it alone like Jimmy. Unfortunately, Pryce isn’t as worldly and made a few bad decisions that will haunt him—firstly, deciding to fire Mike (Jonathan Banks) as his bodyguard during his transactions with Nacho, which gave Nacho the perfect opportunity to sneak a peek at this nerdy man’s home address and set him up. Naive Pryce believes his home was burgled the next day, with the thieves taking his prized baseball cards, but the two investigating officers take note of some odd details: how can this guy afford a pimped-out Hummer, and why didn’t the thieves take his TV? It all led to them discovering Pryce’s hidden compartment behind his sofa (which luckily was empty), but they’re clearly on to him. His world’s about to come tumbling down around his ears, just because he refused to pay Mike for a service he didn’t know was so crucial.

I’m intrigued by this storyline for one reason: why would Nacho want to drop Pryce in the shit? I can believe he doesn’t like the guy, but he’s a well-placed source for drugs and wasn’t causing anyone a big problem. Maybe Nacho is playing the long game, or has an angle on things we can’t see just yet—but Pryce will surely fold under light interrogation and be able to describe both Nacho and Mike, right? Things could get very dicey.

“Switch” was a decent premiere, if nothing extraordinary by this show’s high standard. Better Call Saul feels so effortless the hour just slipped by, and it’s the amazing attention to detail that’s most appreciated. Similarly to Mad Men, you can just tell the writing and performances have been skilfully honed to precision. So while this episode wasn’t a huge standout for the series, it capably got the ball rolling again. I loved the last scene, too—with Saul essentially enjoying the a ‘happily every after’ ( becoming a respect lawyer at a big firm with his own corner office and choice of desk), but realising none of this really feed his naturally rebellious and criminal spirit.

All he can do at David & Maine to cause mischief is disobey a sign under a light switch. Without the admiration of an older brother to earn, it’s only a matter of time before ‘SG IS HERE’.