The 1970s wasn’t a great decade for many major US cities. The crime rate was high and poverty was becoming a big problem thanks to the poor economy and low employment. New York City was close to bankruptcy in 1975 and President Ford famously refused to bail it out. In 1977, a city-wide power outage shone a light on the social unrest increasing in the Big Apple: during a 25-hour period of blackouts, there was an outbreak of looting and crime that led to over 3,000 people being arrested by police. Films such as Walter Hill’s The Warriors and John Carpenter’s Escape From New York (1981) highlighted this social climate, and both stories theorised that NYC would sink further into violent crime and gang warfare.

Before directing, Hill had achieved success as a screenwriter with Hickey and Boggs (1972) and The Getaway (1972). After making a name for himself as a wordsmith, he later sat in the director’s chair for one of his own screenplays, Hard Times (1975), produced by Lawrence Gordon. Hill’s second feature, The Driver (1978), was commercially unsuccessful but is now considered a cult classic and was a prime influence on Edgar Wright’s recent Baby Driver (2017). 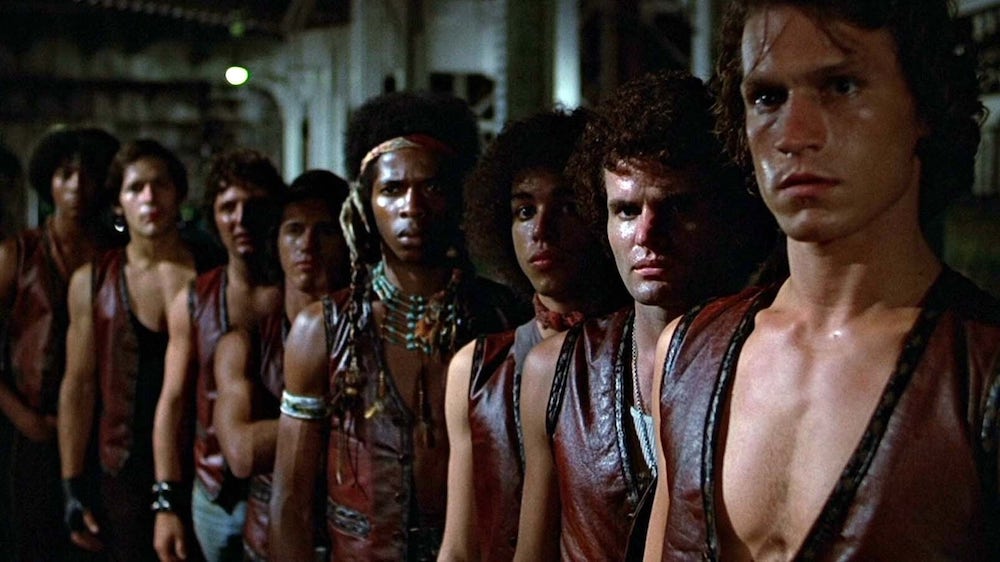 After being handed a copy of author Sol Yurick’s 1965 novel The Warriors, Hill was attracted to its simple narrative and realistic vision of teenage street gangs. He pitched his idea for a movie adaptation to Paramount Pictures, who were now interested in creating a catalogue of youth movies to repeat the successes of Saturday Night Fever (1977) and Grease (1978). They agreed to let Walter Hill direct the $4M movie.

The Warriors begins with an urban gathering of every gang from across New York City. “The one and only” Cyrus (Roger Hill) has called a meeting to form a truce between all the gangs to unite as a single entity, but the plan goes to hell when Luther (David Patrick Kelly) from “The Rogues” assassinates Cyrus and frames the “The Warriors” for the deed. Then a local DJ puts the word out on the street that there’s a bounty on The Warriors to be brought back dead or alive. From this point, it’s an action-filled adventure that tracks the framed gang as they pass through rival turf to reach their sanctuary of Coney Island.

The Warriors novel was loosely based on Greek mythology and the Battle of Cunaxa in 401 B.C. The myth goes that the leader of a 10,000-strong army led his soldiers through enemy territory, without allies or supplies. With over a million enemy soldiers, there was danger and betrayal at every turn during the expedition, but they eventually found their way back to their homeland near the Black Sea. Modernised to New York City, Hill kept to the source material closely and casts his unconventional, criminal protagonists as epic heroes. These characters aren’t street thugs, but heroes showing qualities such as loyalty, honour, and strength as they take a journey towards a better life in the shadow of an urban hellhole. 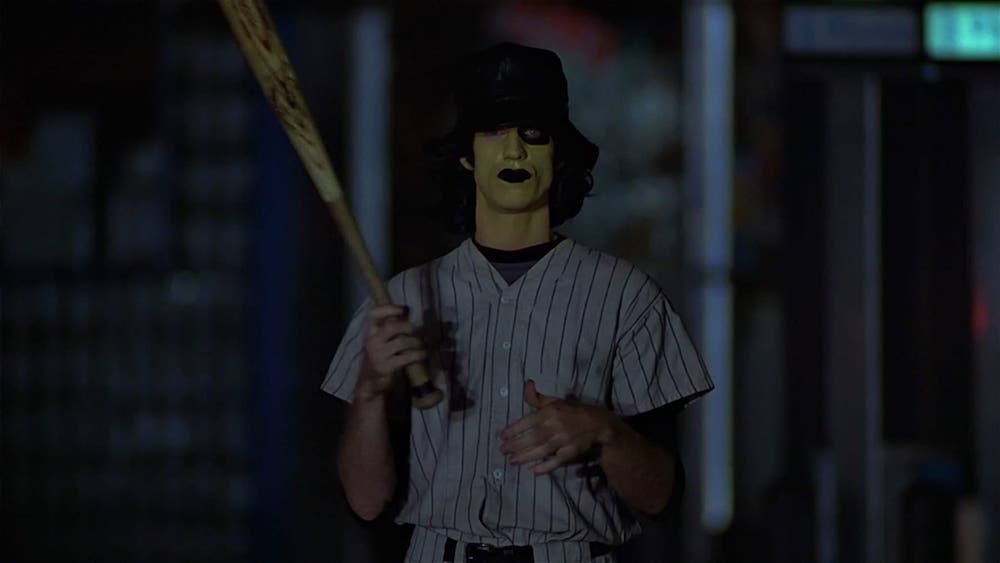 From the start, Hill’s vision for The Warriors succumbed to production constraints. Being a massive fan of comic-books and wanting to keep several of the novel’s illustrations by Frank Modell intact, Hills wanted to divide the movie into five chapters beginning with a comic-book splash panel. Imagine Creepshow (1982) meeting West Side Story (1961). However, due to a low budget and a tight post-production schedule, Hill was unable to include these scene transitions. Paramount Pictures wanted to get The Warriors into cinemas before a similar gang-themed movie called The Wanderers (1979) was released by Warner Bros. This wouldn’t be the only time Paramount stepped on Hill’s toes during production. Again sticking close to the source material, Hill wanted Puerto Rican actors and actresses to play the central characters, as in Yurick’s book, but Paramount didn’t like the idea of having an all-black cast for “commercial reasons”.

What makes The Warriors so diverse is that the gangs are filled with a variety of characters and personalities. The titular mob are led by the level-headed Swan (Michael Beck), who does a great job at keeping his friends calm as they make their way through each sector of New York. Second-in-command is Ajax (James Remar), a dynamic gang member who loves the violence and thrill of being part of The Warriors. And then there’s the beautiful Mercy (Deborah Van Valkenbergh), a former member of “The Orphans” gang, who brings out the humanity in Swan after deciding to switch allegiance and help The Warriors get to Coney Island. 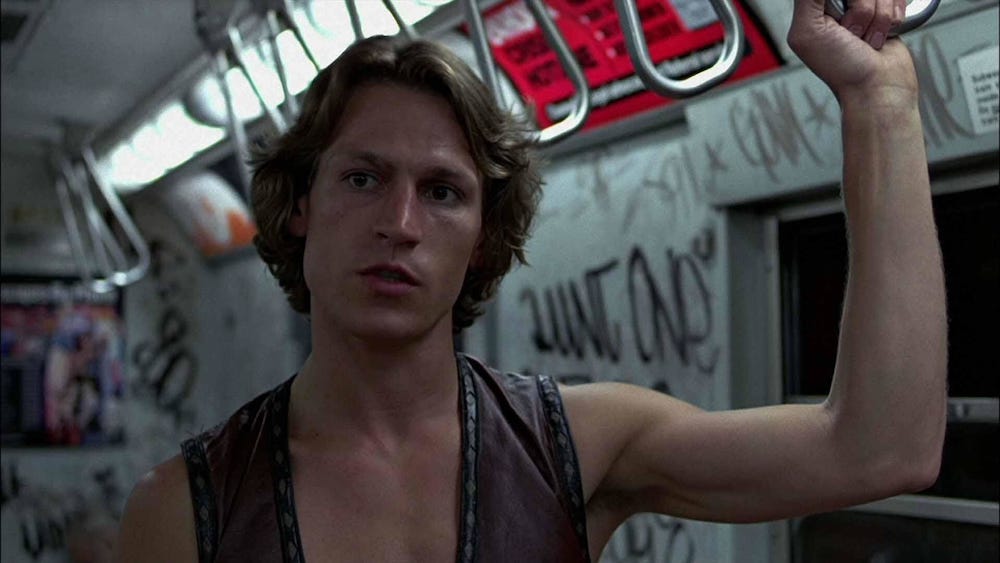 The Warriors features an early appearance from David Patrick Kelly as Luther, leader of “The Rogues”. Luther has an appetite for destruction and explains “I just like to do things like that” after shooting Cyrus. Kelly went on to become a memorable villain in films such as Commando (1985) and The Crow (1994), but most famously utters the film’s most famous line—“Oh, Warriors? Come out and play-ay”—which he ad-libbed. Roger Hill’s performance as Cyrus is essential to the narrative as he gathers the gangs together. Delivering classic lines such as “can you dig it?” and “can you count suckers?”, his powerful performance echoes of inspirational real-life leaders such as Martin Luther King Jr. and Robert Kennedy. His performance truly earns his character’s title of being “the one and only” and some of these phrases still echo around pop culture today.

An important scene is when characters Cochise (David Harris), Rembrandt (Marcelino Sanchez), and Vermin (Terry Michos) are lured from the safety of a train at Union Station by beautiful all-female gang “The Lizzies”. The nature of the gang’s gender and the promise of sexual seduction refers to the famous Sirens in Homer’s “The Odyssey”; dangerous female creatures who lure sailors to their doom with enchanting music. The Warriors are drawn from their safety of the train car and led to danger with the promise of sex. Until this point the film revels being an all-male brawl. “The Lizzies” inject a form of feminism strength not often seen in movies centred around gang violence. Hill symbolically works in the ‘Riot Grrl’ movement that was prominent during the time. 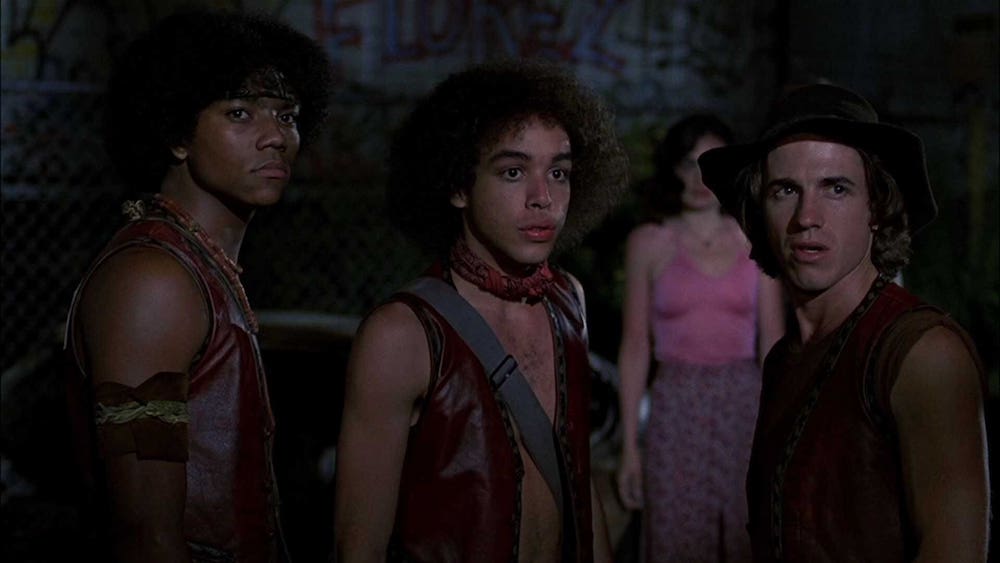 Andrew Laszlo’s cinematography captures the desolate alleyways and apocalyptic dread of a city drowned in criminal activity. However, through all the darkness, The Warriors manages to gorgeously juxtapose the fluorescent subway lights, bright traffic lights and police sirens against the darkened backdrop. Like the glaring neon of cinematography, Barry De Vorzon’s score is bright, flashy and full of energy. Synths and distorted lead guitars mark the stage between glam rock and new wave along with punk and pop. It captures the isolation of New York at night along with youthful action. “In The City” is the movie’s most iconic track that plays throughout, but most notably during the freeze frame at the end of the movie as The Warriors stand heroically on the beach with a red sun hanging low in the sky.

The Warriors captured the essence of late-1970s New York perfectly: a rundown neon metropolis falling apart at the seams, where the only hope of a better life was escaping the gang lifestyle. Filled with flamboyant garments, sometimes wooden dialogue, and poorly-executed fight sequences that look like something from WWE, The Warriors is played tongue-in-cheek. Like Jason and the Argonauts (1963) and Clash of the Titans (1981), it left a lasting impression on a generation of movie fans. Today, it’s appeal is more limited unless you’re amused by vicious mime gangs. However, before he passed away in 2012, Tony Scott (True Romance) had been attached to a remake for several years, and with better dialogue and fashions a contemporary adaptation could work. 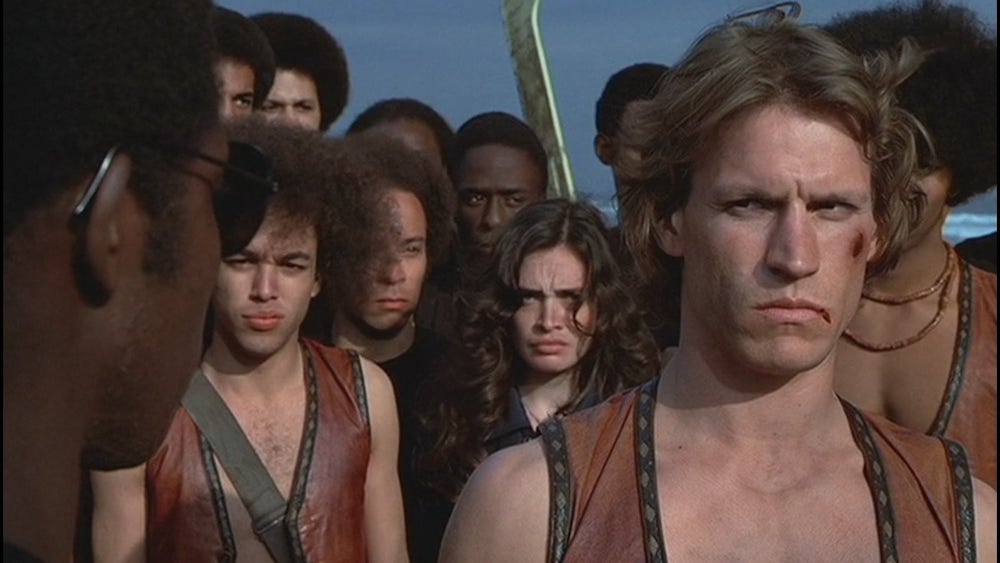 Although regarded as a cult classic today, upon release The Warriors caused controversy. Gaining mostly negative reviews, it nevertheless proved very popular with real-life gangs. The weekend after its release, the film was blamed for a sporadic outbreak of vandalism and shootings at local cinemas and three killings. This prompted Paramount Pictures to remove advertisements from radio and TV in over 200 cinemas across the US, then adding security during screening due to public safety concerns. It still proved successful, grossing $22M at the box office.

It’s possible those most alarmed by The Warriors didn’t actually see it. It’s possible the most frightening aspect of the movie is the essential truth of its premise, that the streets already belong to the those inclined to violence and criminality. New York City, at the time, was a dying city, with entire blocks deserted due to fear and loathing. Hill is stated in an interview with Esquire regarding for The Warriors’ 35th anniversary that “the movie didn’t present that gang and gang structure as a social problem. It presented it as simply a fact, the way things are, and not necessarily a negative. It presented them from their point of view.”

Despite working with a small budget, a cast of mostly unknown actors, for a studio that didn’t understand or care about his artistic vision, Hill made an enduring piece of cinema that worked as both a cultural artefact and an action movie. One may laugh at the cartoonish gangs nowadays (“The Furies” were created due to Hill’s love of baseball and the rock band Kiss), but the simple story, colourful costumes, and neon-soaked backdrop of a gritty NYC, proved to be perfect material for a 2005 video-game from Rockstar—proving just how much of a cultural influence The Warriors still has on people decades later.